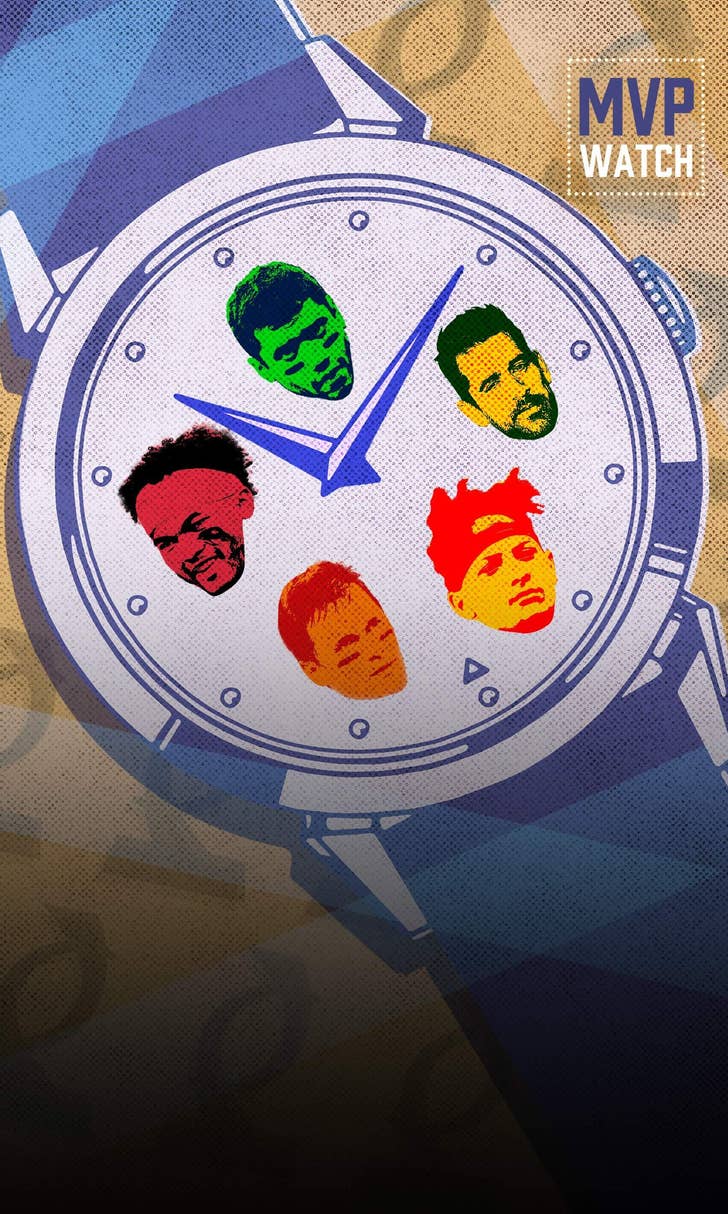 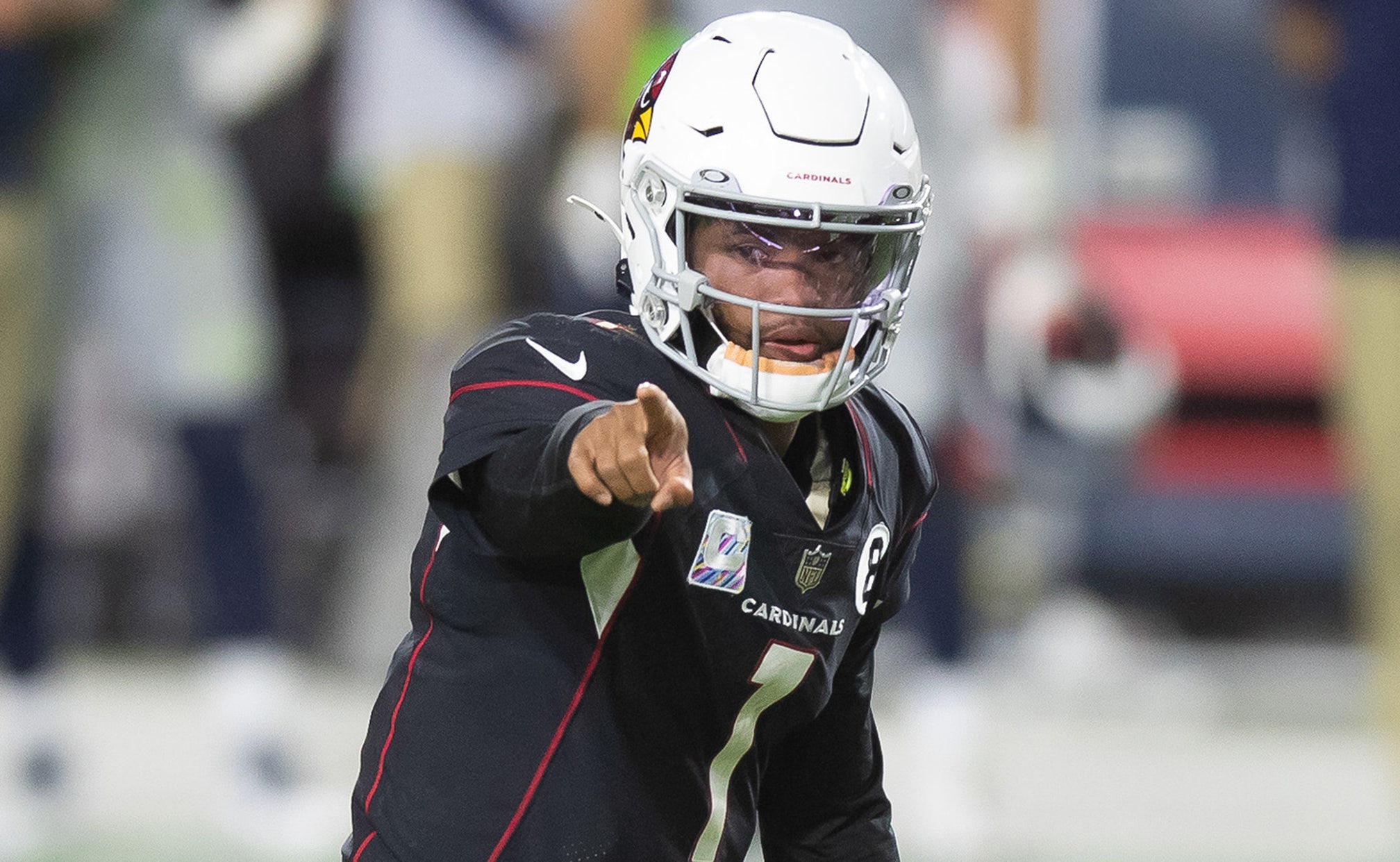 Russell-mania is still in full force.

The dynamic Seattle Seahawks quarterback retained his spot as the favorite to win this year's regular season MVP award, but an up-and-comer who has drawn many comparisons to Wilson has started staking his claim — Arizona Cardinals quarterback Kyler Murray. 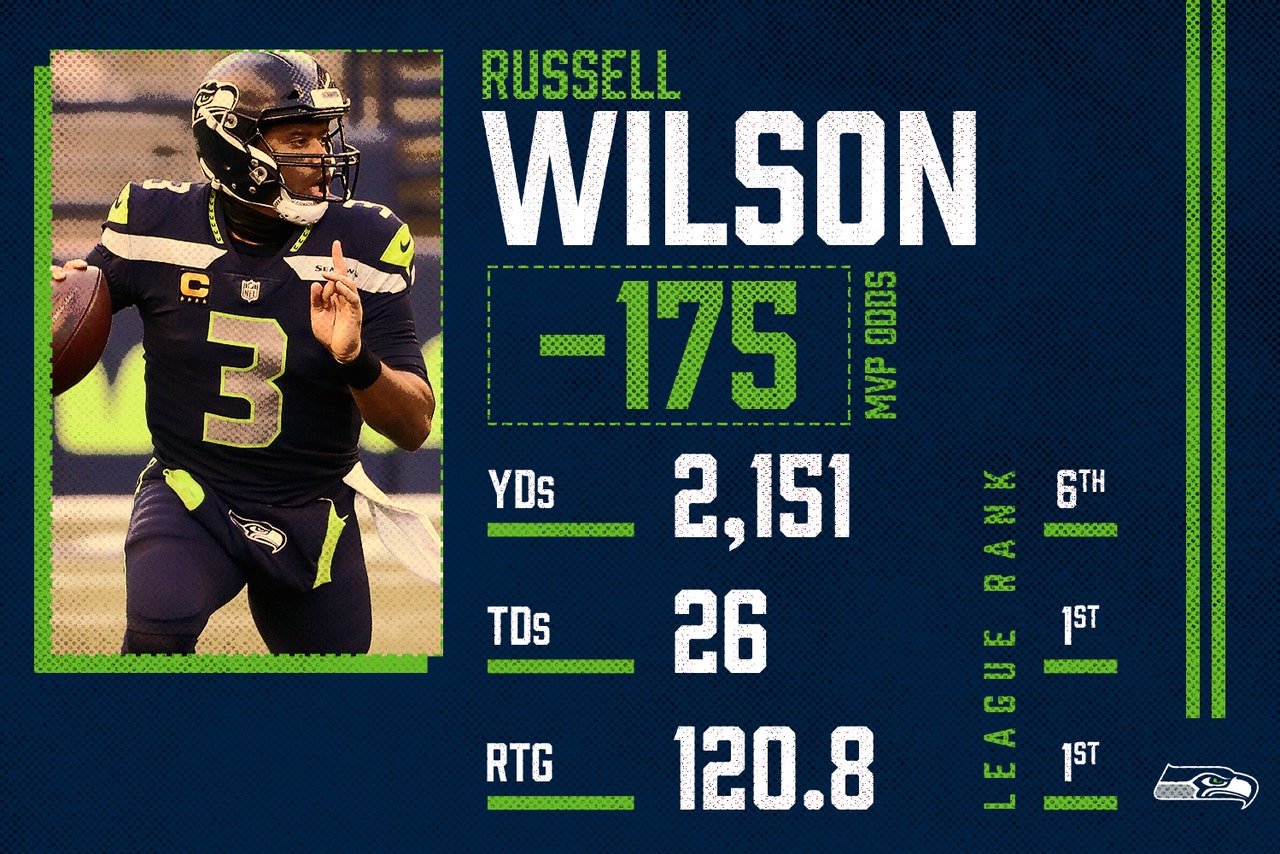 How it's going: Still the MVP favorite, Wilson bounced back from a so-so outing in a Week 7 loss to the Cardinals into another virtuoso performance in Week 8. In Seattle's 37-27 win, Russ bumped his regular season record against San Francisco to 13-4, and put on a four-touchdown showcase that saw him complete 73 percent of his passes and rack up 261 yards through the air. A whopping 12 of his 27 completions went to breakout star DK Metcalf, who's been a revelation for the Seahawks.

What's up next: Seattle will take its 6-1 record all the way to Buffalo to square off against Josh Allen and the 6-2 Bills. Wilson's faced the Bills twice in his career and has a 2-0 record, but those victories came in 2012 and 2016. This Buffalo team has a different air about them, although they've struggled with other top teams so far this season. Their two losses have come at Tennessee and against Kansas City.

What people are saying: "If Russell Wilson gets to that magic number [50 touchdowns], there's no denying him." ⁠— Emmanuel Acho 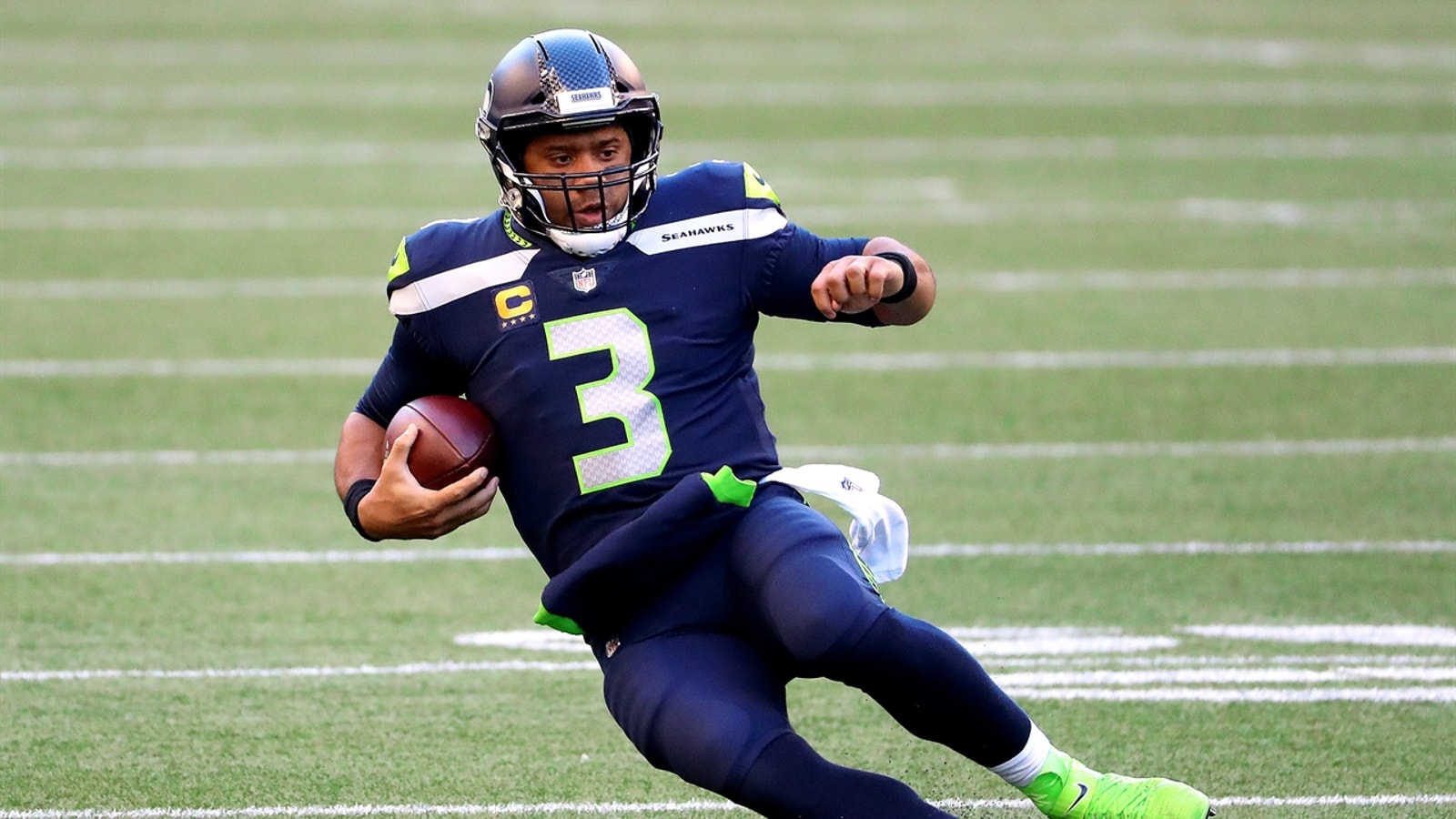 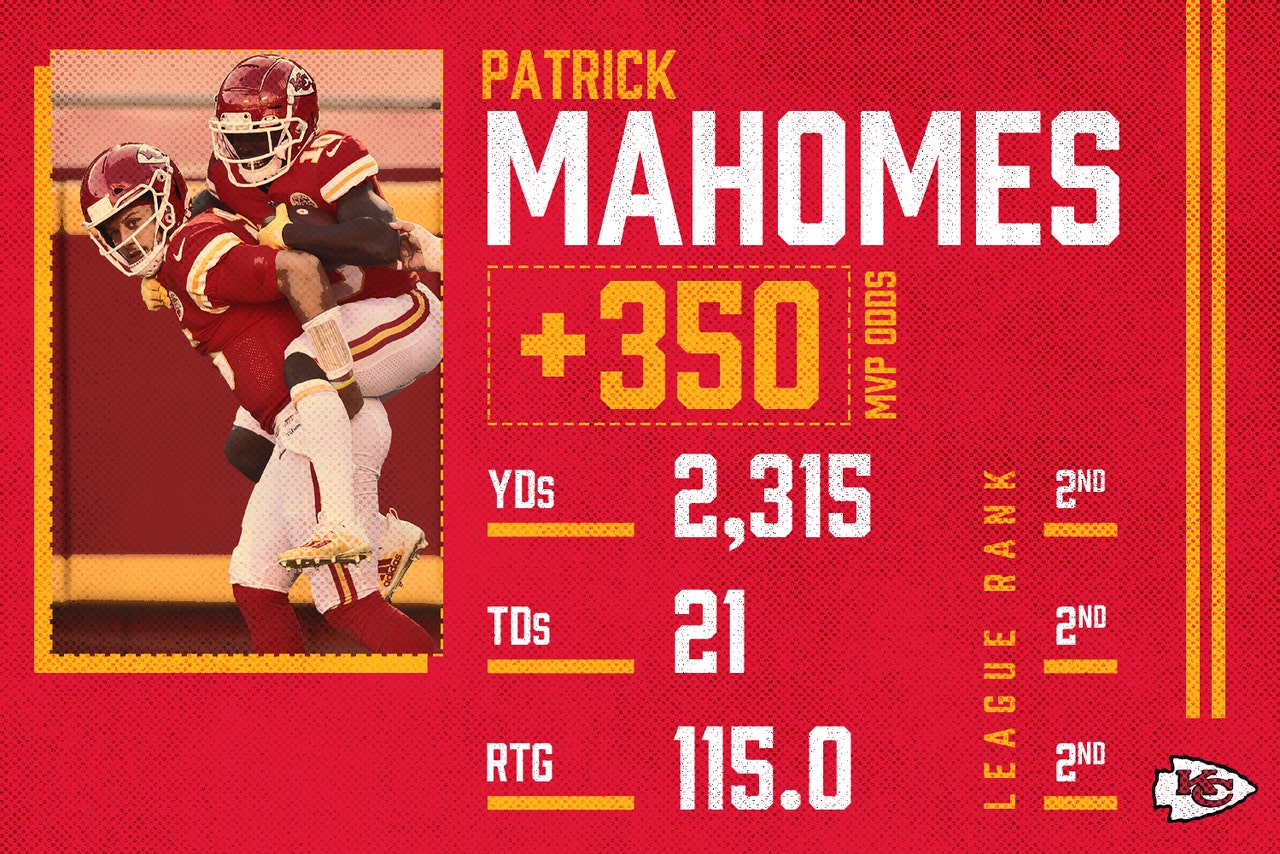 How it's going: We predicted last week that Mahomes would be licking his chops against the Jets – but didn't quite call him feasting for five touchdowns. Andy Reid showed mercy by bringing in the backups once up 35-9 with just under 11 minutes left to play, ensuring his talisman quarterback could bask in the glow of the win, while also keeping him safe on the bench.

What's up next: The red-hot 7-1 Chiefs welcome the reeling 3-5 Panthers on Sunday. Kansas City has won three straight, while the Panthers are on a three-game skid. Mahomes has never faced the Panthers, but they did a solid job in back-to-back weeks against high-profile quarterbacks in Drew Brees and Matt Ryan.

What people are saying: "Mahomes’ performance on third downs is something close to absurd because of his combination of ability to read defenses, extend plays, decisiveness, athleticism, and arm strength to test windows and drive the ball where others might not be able to." ⁠— Seth Keysor, The Chief in the North Newsletter 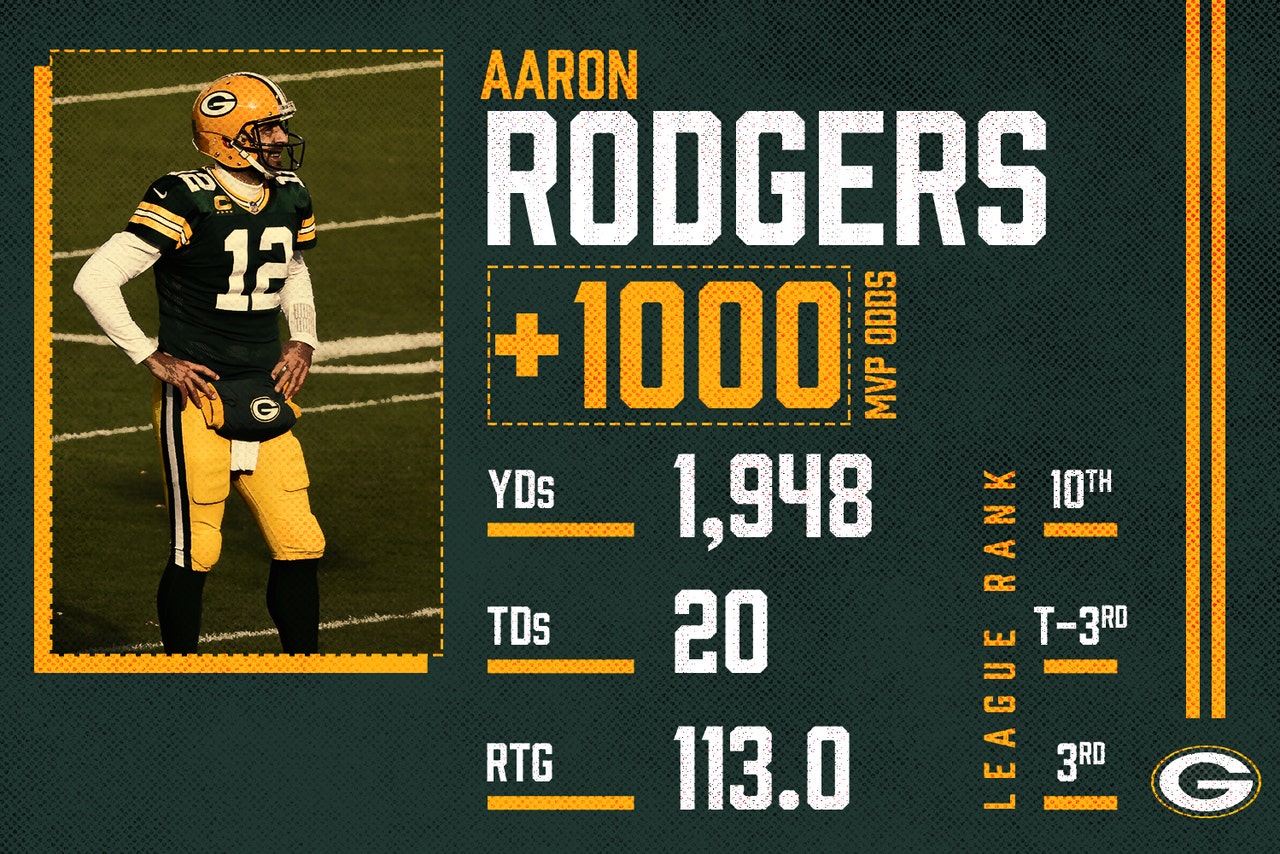 How it's going: The Packers got smacked by the Vikings and Dalvin Cook's four TDs on Sunday, but Rodgers kept them in the fight. He threw for three touchdowns and just under 300 yards in the 28-22 loss, with Davante Adams shining yet again for the Pack. Despite the performance, Rodgers let his frustration become known when he questioned the officials over a fourth quarter no-call.

What's up next: The 5-2 Packers take on the 4-4 Niners – who have been hard hit by the injury bug yet again – in a Thursday night clash. Star tight end George Kittle and starting QB Jimmy Garoppolo are both expected to miss extended time for SF. With 14 touchdowns and two picks, Rodgers has enjoyed a lot of personal success against San Francisco in the regular season, but his teams are just 4-3 in those contests. There's also the matter of last January's NFC Championship Game to address... 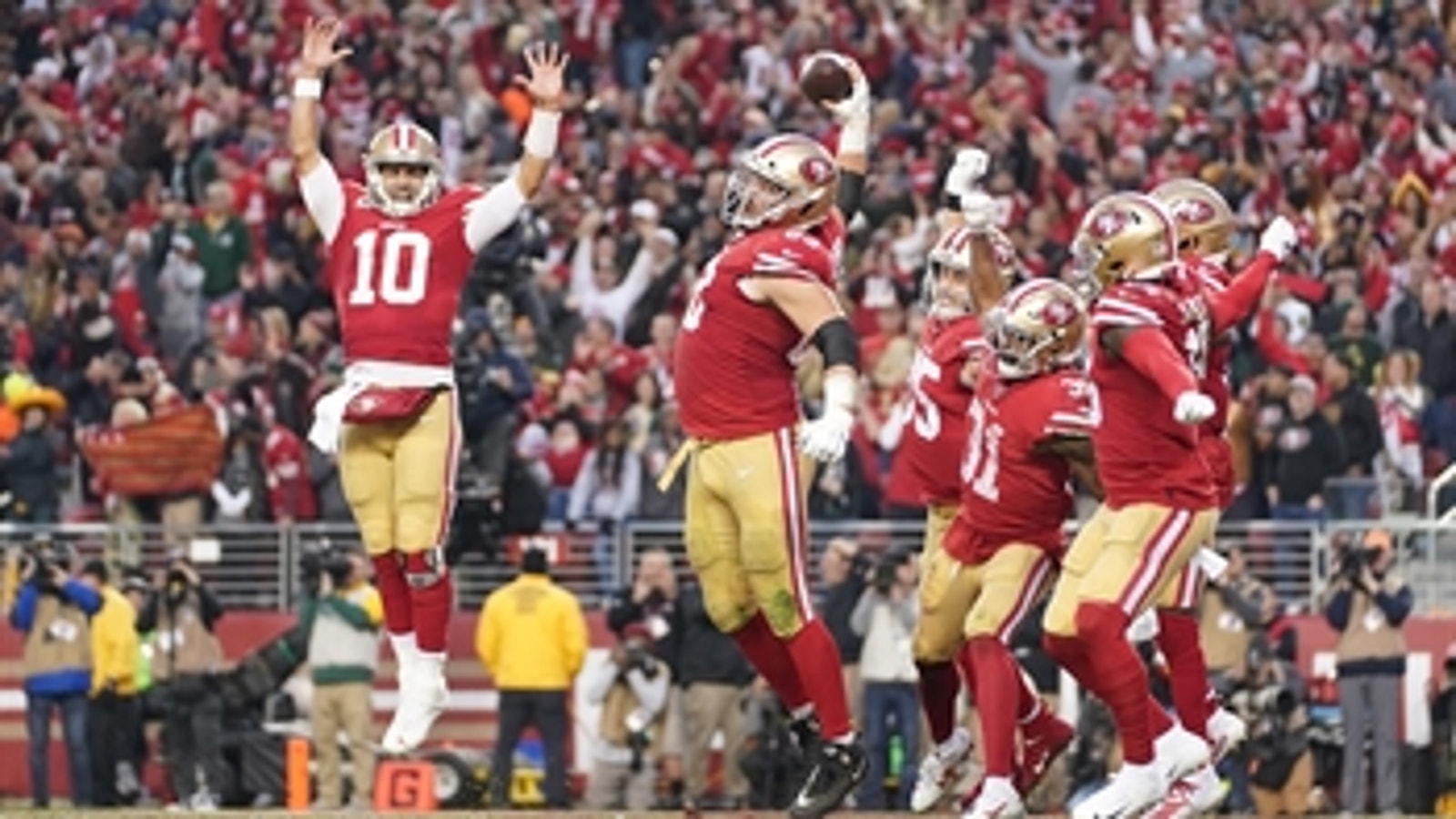 What people are saying: "Stop doing the crossword puzzle, Ted Thompson-style, step up and go get some help both for that run defense and for Aaron Rodgers if you want to maximize what's left of his window." ⁠— Michael Silver 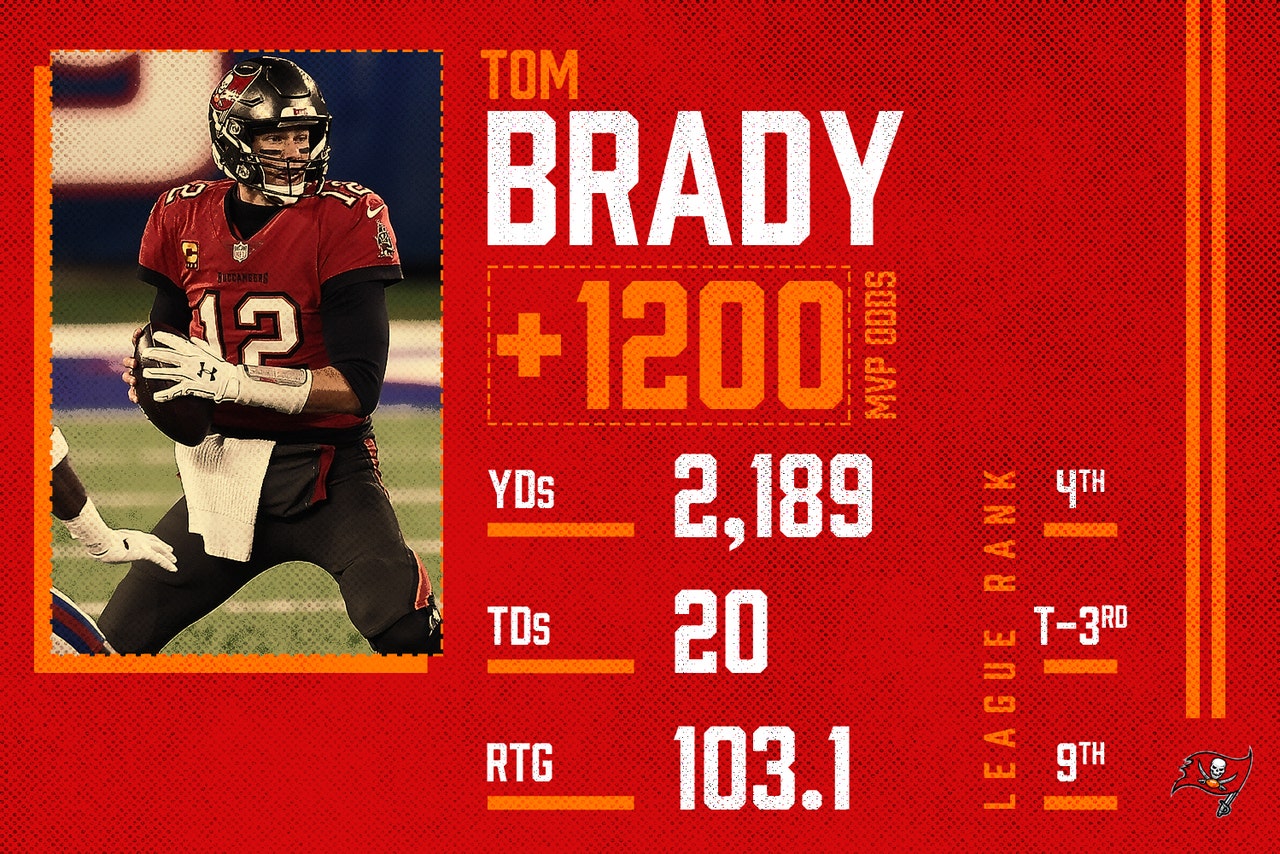 How it's going: The Buccaneers narrowly won a sloppy Monday night game against the New York Giants, 25-23. The offense sputtered through the first half before Tom Brady found his footing and threw two touchdowns after the break. He finished the hard-fought contest 28 of 40 for 279 yards, two scores and no picks, connecting with Rob Gronkowski for their 93rd career touchdown as a duo.

What's up next: Brady gets a chance to go toe-to-toe with Drew Brees, as they battle back and forth atop the all-time passing touchdown list. Brady has the edge with 561, while Brees sits at 560 TDs thrown. Brady last faced New Orleans back in Week 1, where he threw two touchdowns and two picks in a 34-23 loss.

What people are saying: “Yes they won the game, but do I think Brady played well? Is Brady still leading the MVP [race]? No.” ⁠— Shannon Sharpe 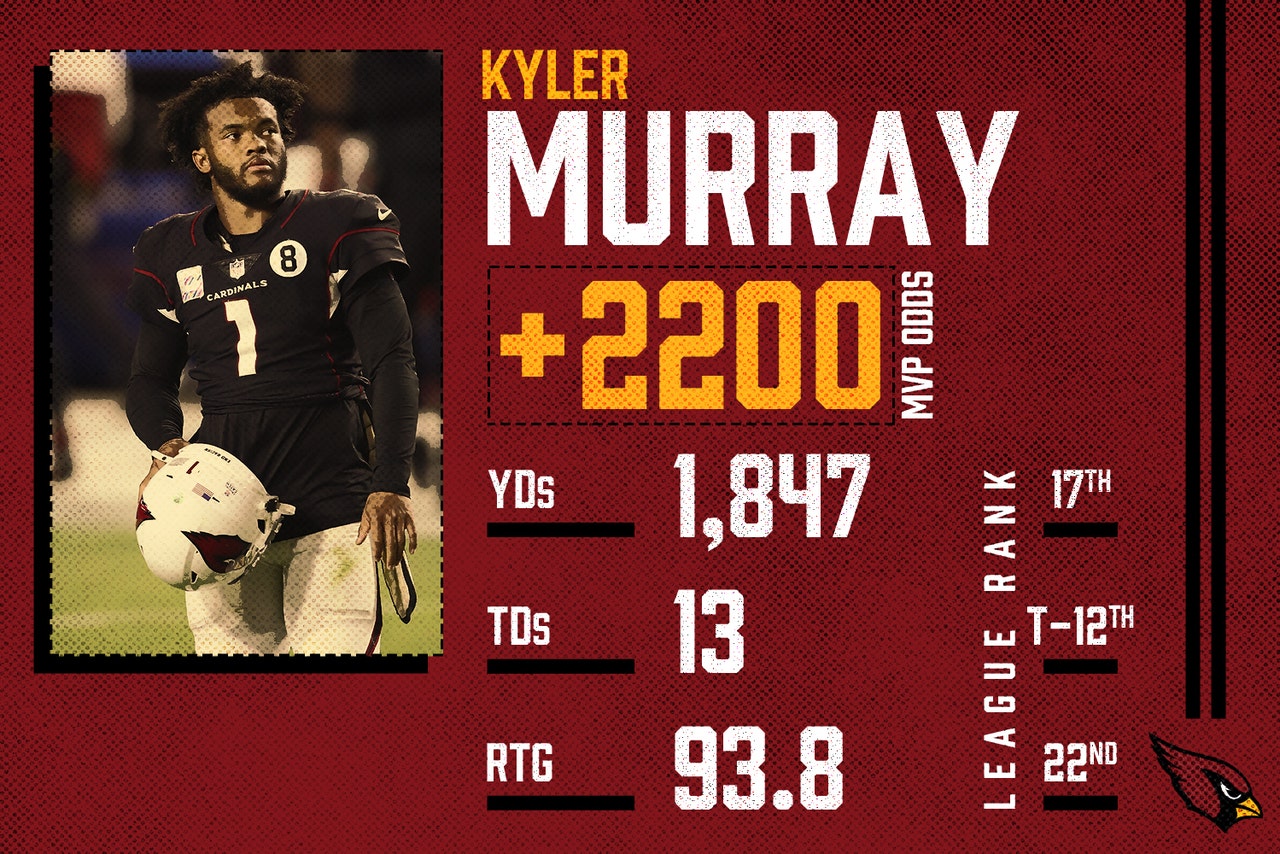 How it's going: The 23-year-old Kyler Murray is making his debut on the fourth week of "MVP Watch," and for good reason. He has the Cardinals on a three-game winning streak, and outside of a dud in a Week 3 loss against the Lions, Murray has hardly put a wrong foot forward. Murray and the 5-2 Cardinals had a Week 8 bye, but his average season totals are solid. Per game, he's averaging 1.9 touchdowns, one pick, one rushing TD and 326.3 total yards.

What's up next: Arizona will host the Dolphins and rookie quarterback Tua Tagovailoa this weekend. Murray has yet to face the Dolphins, but he and Tua duked it out in college in the 2018 College Football Playoff semis. Tagovailoa got the better of Murray in a 45-34 Alabama win, throwing four TDs. Murray threw for two scores and ran for another in that matchup. He lost the playoff game, but did win the Heisman Trophy over Tua that year.

What people are saying: "In just his second season in the National Football League, Kyler Murray has already launched himself, at least, into the MVP discussion ... I believe he is taking that [Patrick Mahomes] leap." ⁠— Skip Bayless 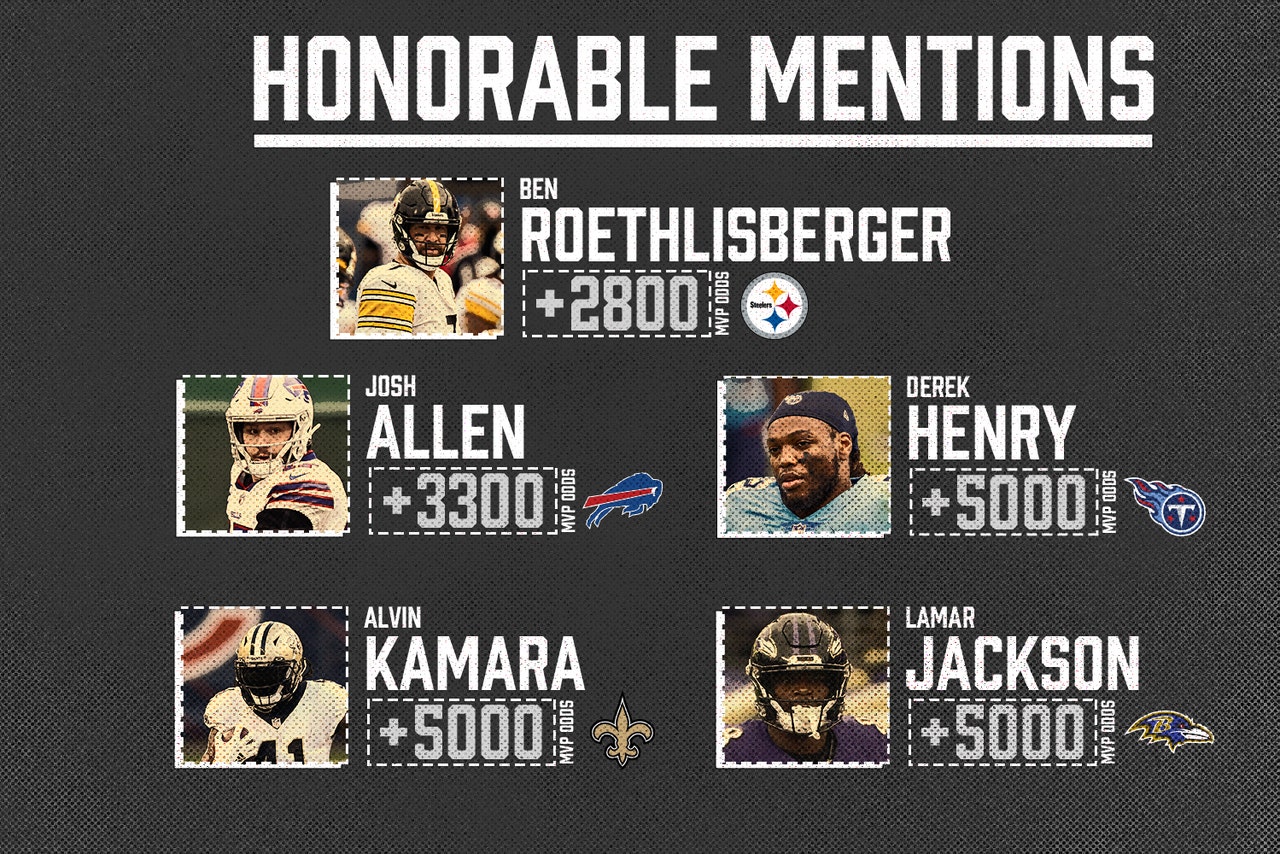 Sean Payton Is The NFL's QB Whisperer
Sean Payton has a body of evidence that suggests he knows exactly what he’s doing when it comes to the QB position.
1 hour ago

Commander in Chief
Mahomes and the Chiefs got their revenge Sunday, and proved that even a perfect game plan is not enough to stop them.
6 hours ago

Two-Horse Race
Geoff Schwartz says the Chiefs and Steelers have separated from the AFC pack, and he picks the horse to bet on in the NFC East.
7 hours ago

Sports World Reacts To Joe Burrow Injury
Here's all the latest on the Cincinnati Bengals rookie quarterback's devastating ACL and MCL injury.
19 hours ago
those were the latest stories
Want to see more?
View All Stories
Fox Sports™ and © 2020 Fox Media LLC and Fox Sports Interactive Media, LLC. All rights reserved. Use of this website (including any and all parts and components) constitutes your acceptance of these Terms of Use and Updated Privacy Policy. Advertising Choices. Do Not Sell my Personal Info