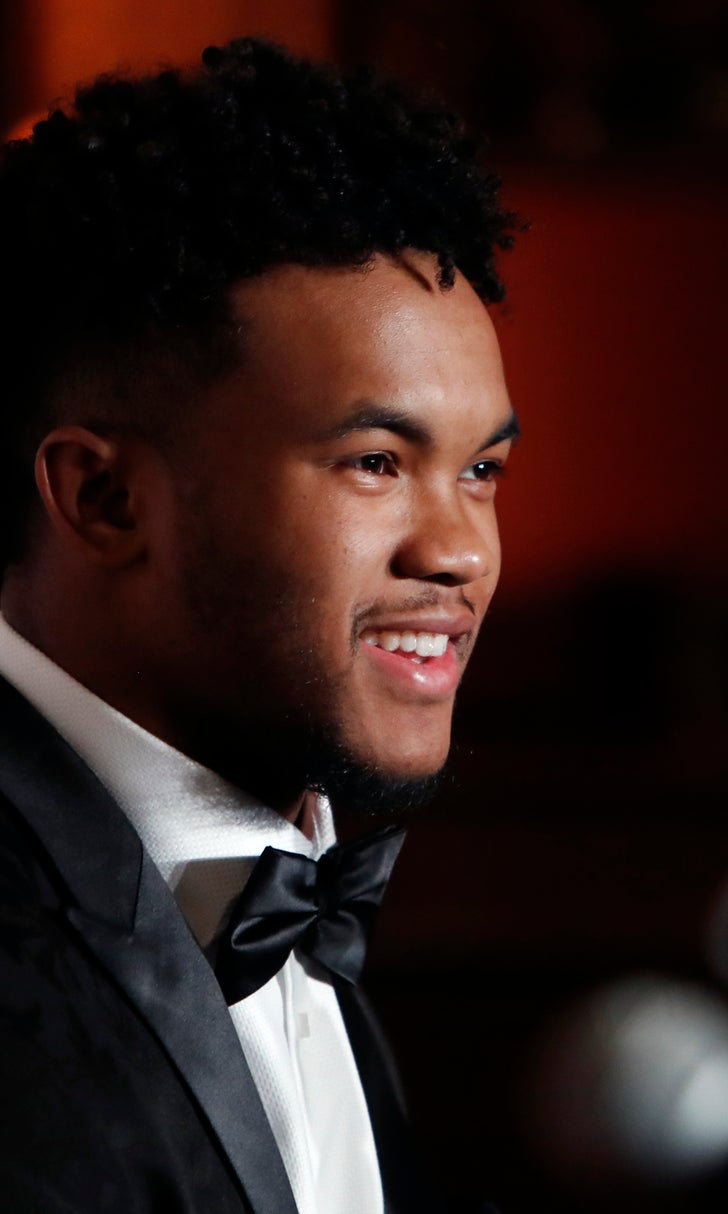 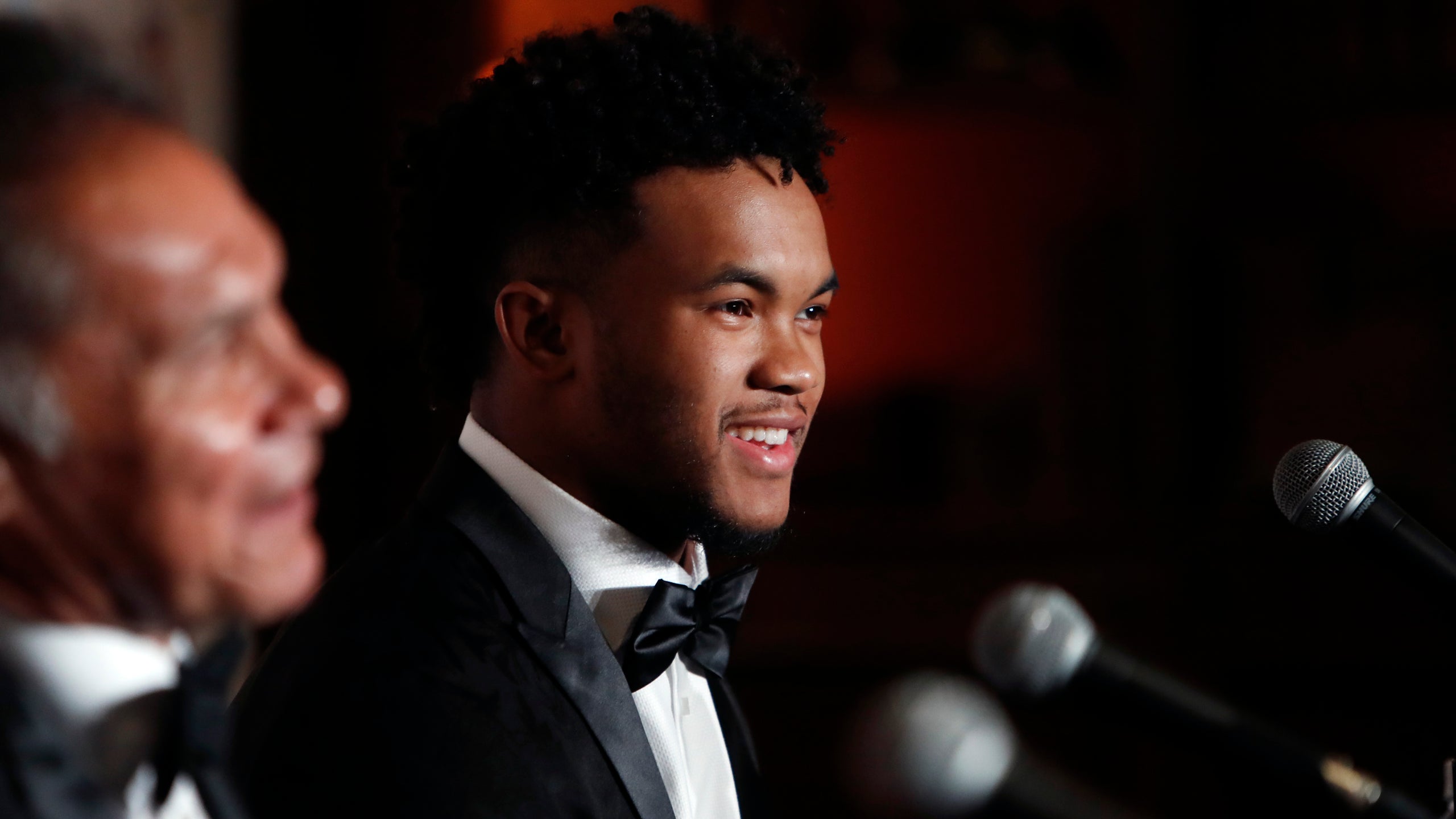 Murray waits to measure up after picking NFL over baseball

FORT WORTH, Texas (AP) — Now that Kyler Murray has decided to play in the NFL instead of reporting to spring training as a first-round draft pick by baseball's Oakland Athletics, the questions can shift to the Heisman Trophy winner's height.

The former Oklahoma star says everyone will get their answer at the NFL combine next week. And that was after Murray listed himself at 5-foot-10 Monday before accepting the Davey O'Brien Award as the nation's top college quarterback.

"I've been a 5-10 projected in the first (round), I mean, that's crazy to me, the fact that I'm already projected that high," Murray said. "I'm not over 6-foot. I haven't seen that since I've been alive."

The 21-year-old who won three state championships and didn't lose a game as a high school quarterback in the Dallas area said football became a factor in his decision simply because he finally had a chance to play again.

After signing a contract for a $4.66 million signing bonus as the ninth overall pick in June by Oakland, Murray led Oklahoma to the College Football Playoff in his only season as the starter while posting the second-best passer efficiency rating in Bowl Subdivision history.

Before throwing for 4,361 yards and 42 touchdowns and running for 1,001 yards and 12 scores, Murray's only extensive college experience was a rough freshman season at Texas A&M in 2015. After transferring to Oklahoma, he was the backup to 2017 Heisman winner Baker Mayfield, the top pick in last year's draft.

"Obviously my career as far as the early stages of my college career, it wasn't looking too hot," said Murray, who like Mayfield lost in the CFP semifinals. "And then after this past season, it was to go in and kind of put myself in the best possible situation. I think I did pretty well."

Murray said he hasn't decided the specifics of his participation in the NFL combine, but Oklahoma coach Lincoln Riley believes his time in the 40-yard dash could be an eye-opener. Murray said it's been "two, three years" since ran a 40, at 4.3 seconds.

Most of the attention will be on his height, however. Reminded before the O'Brien ceremony that the 1938 Heisman winner from TCU was 5-7, Murray said he knew that and added, "So me and him have got something in common."

Given the obvious chance to clarify, he still declined to offer anything more specific than the already-mentioned 5-10.

In the same setting a year earlier, Mayfield shot back at a question about whether he could go in the top 10 of the draft by saying his goal was to be the No. 1 overall choice.

After the Browns made that happen , Mayfield won the job early in the season and led Cleveland to seven wins in 2018 after the Browns were coming off a two-year record of 1-31. Now Murray will try to move up the draft board the same way Mayfield did, with a different set of issues to address.

Murray also thinks the economics prove his love for football. The deal with Oakland called for him to receive $1.5 million after approval last summer by Major League Baseball and $3.16 million on March 1. Murray must return six-sevenths of the money he received, or $1,285,714.

"Obviously the money wasn't a big deal. I literally played football for free," Murray said. "I could have not even played this football season and just went and worked on just being a professional baseball player. I decided I was going to go play football and now I'm here."

Can Buffalo Shock The World?
The Bills are coming in hot, but can their defense find a way to stop Patrick Mahomes and Travis Kelce in Kansas City?
2 hours ago

The Most Significant QB Duel Of All Time?
Tom Brady & the Bucs take on Aaron Rodgers & the Packers in what could be the greatest NFL playoff QB duel we’ve ever seen.
2 hours ago

Colin's Blazin’ 5: Championship Sunday
Colin Cowherd is back with his favorite picks against the spread ahead of the NFL's championship weekend.
3 hours ago

Will The Mahomes News Move Lines?
Patrick Mahomes is set to play Sunday. Will the odds change? And how much are elite QBs worth to the spread? Sammy P explains.
6 hours ago

Confidence Picks For Championship Weekend
Both the AFC and NFC title games are rematches, so Geoff Schwartz examines what we can learn from those first meetings.
6 hours ago
those were the latest stories
Want to see more?
View All Stories
Fox Sports™ and © 2021 Fox Media LLC and Fox Sports Interactive Media, LLC. All rights reserved. Use of this website (including any and all parts and components) constitutes your acceptance of these Terms of Use and Updated Privacy Policy. Advertising Choices. Do Not Sell my Personal Info