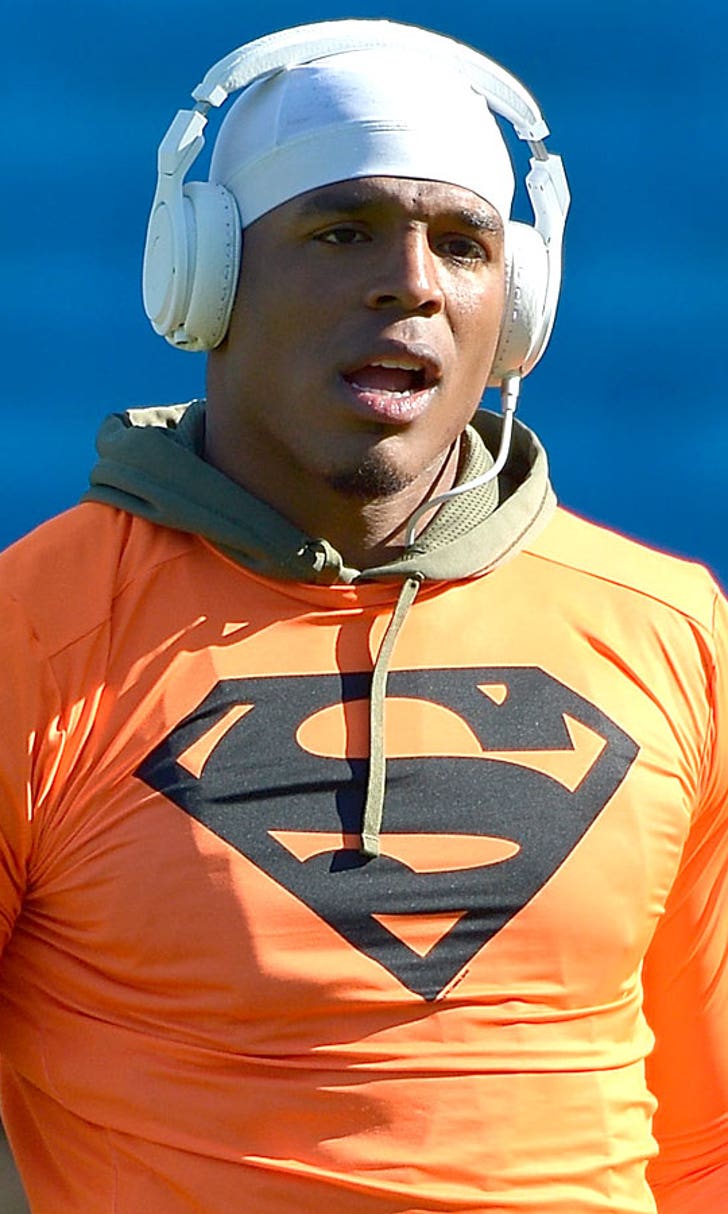 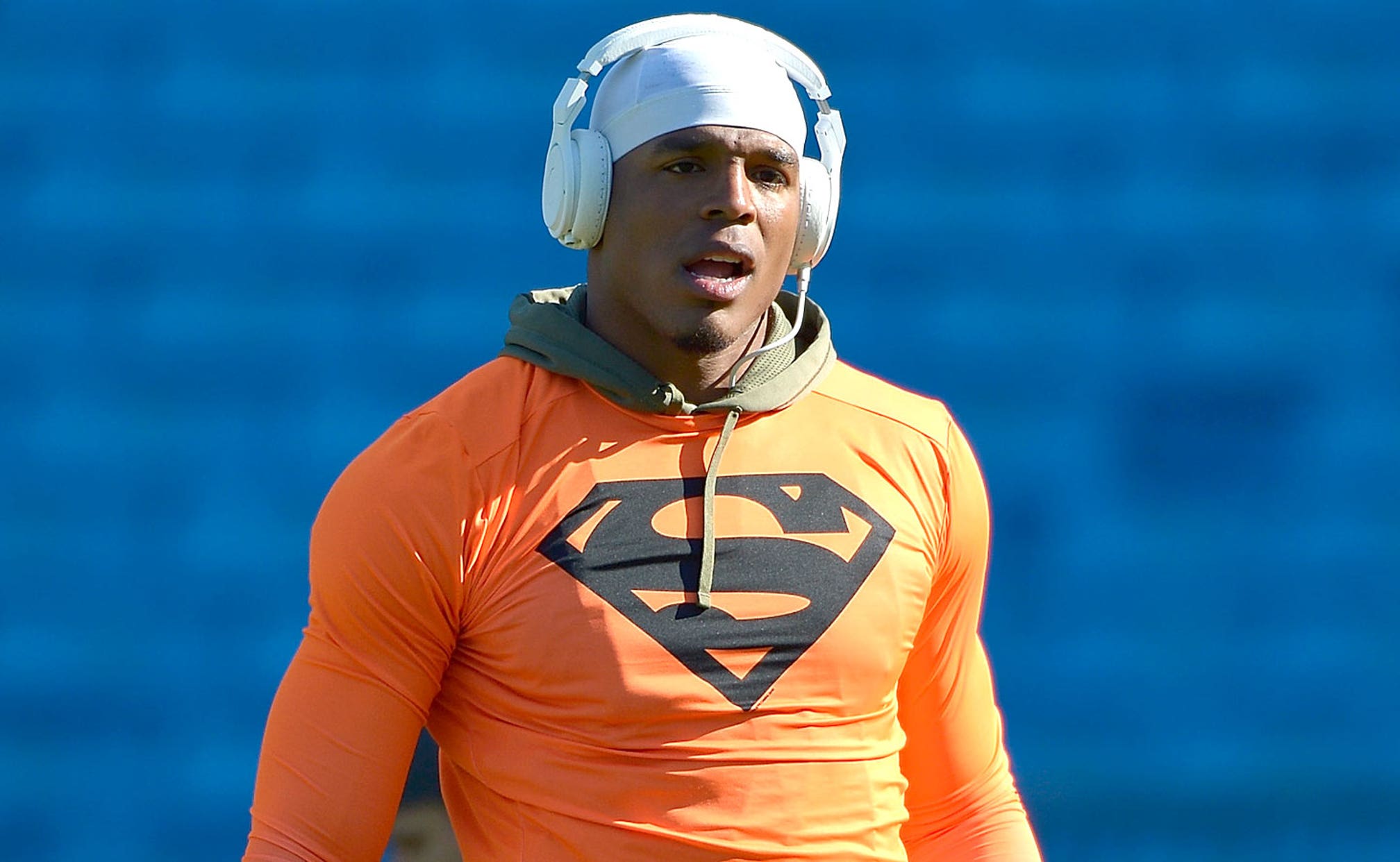 Is race really a factor in how Cam Newton is perceived? 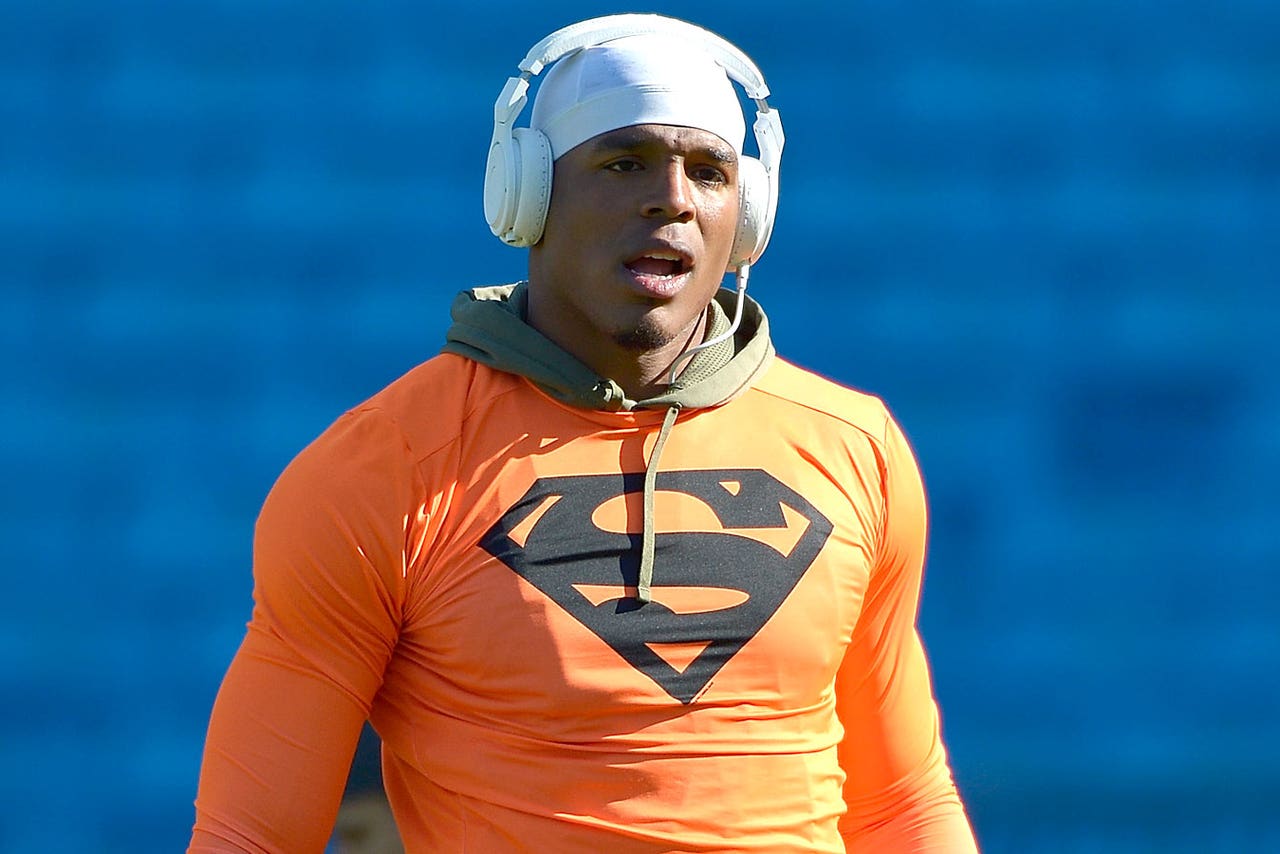 Warren Moon is under no illusion regarding Cam Newton. The mentor understands his mentee has made mistakes in the past, didn't handle adversity very well early in his career and even now could stand to shorten some of his celebrations.

It's just that Moon can't figure out why the backlash the Carolina Panthers' quarterback receives for his on-field behavior is so intense. The only conclusion he can draw is threefold: Part of it is racial, part of it is due to his behaving unlike a traditional quarterback and part of it has to do with Newton's college days, when he left the University of Florida after being arrested for allegedly stealing a laptop and then played at Auburn under more allegations his father demanded money from programs in exchange for his son's enrollment.

Those issues affected people's perceptions in college and early in his NFL career. As far as Moon is concerned, they still do -- but shouldn't, especially now that Newton is the leading candidate to be named league MVP later this week.

"That's the thing I don't understand. How come they just can't let it go?" Moon told FOX Sports by phone late last week from Hawaii, where he was making promotional and charitable appearances in advance of the Pro Bowl. "If he hasn't done anything (recently) that's been against the law or anything that would cause negative publicity, isn't out in the world doing something wrong except for just dancing after a touchdown, I mean what is the big deal? He's worked toward maturity in the last five or six years he's been in the league and has done positive things to erase a lot of that negative stuff from when he was 18, 19 years old. I just don't know why people can't let all of that stuff go.

"You'd think he raped like five pastors' daughters over the last five years and he's getting away with it the way people are talking about him."

We didn't even get to the Bay Area for Super Bowl 50 week before the debate about Newton the lightning rod began.

It started when he answered a question at his press conference in Carolina last week by saying he's "an African-American quarterback. That might scare some people because my skill set isn't like anybody else." In the days since, opinions and hot takes abound as to whether the backlash toward Newton is due exclusively, or at least primarily, to race.

It's been nearly 30 years since Doug Williams became the first African-American quarterback to start a Super Bowl. This year's game will mark the fourth in a row featuring one. Progress has been made to that end, no doubt, but African-American leaders and former quarterbacks have been vocal in saying more is needed. They are in Newton's corner.

There are those like Moon and Panthers coach Ron Rivera who know Newton well and proclaim him to be a capable leader in the huddle, the locker room and the community. They are in Newton's corner as well.

And there are those who see a handsome young man with extraordinary talent, one who has worked hard to improve his game, who has fun out there because it's a game and it should be fun, who flipped his car (seemingly because of a dangerous intersection, not reckless driving), crawled out the back window and smiled for the cameras, who does charitable work practically every Tuesday during the season and who started the tradition of handing footballs to kids in the stands after Panthers touchdowns. They see a hero. They are in Newton's corner.

Those rooting for Newton believe a Super Bowl victory over Peyton Manning and the Denver Broncos will be the antidote to a lot of hate, even if some people's opinions will never change.

"Look, we love our heroes to come back from adversity and all of those kinds of things and sometimes we love our heroes to have flaws because that makes it easier to identify with them," said sociologist Harry Edwards, a former Black Panther who has written plenty about the experience of the black athlete and currently serves as a consultant for the San Francisco 49ers. "But once we look at it through a lens of racism, those flaws become insignia of depravity, insignia of utter contemptibility that disqualifies this guy as being a hero for me or my children or my community or my race, and that's tragic. That is tragic.

Edwards cited Jackie Robinson as an example of an athlete who sparked debate about social change by succeeding. He believes Newton, in his own way, can do the same.

"I hope that he wins the Super Bowl for that reason and believe me, I'm not a Carolina Panthers fan," Edwards said with a laugh, "if for no other reason than I'm with the 49ers."

Some detractors will argue the criticism Newton receives has nothing to do with race. They'll point to Seahawks quarterback Russell Wilson and note he doesn't receive nearly as much backlash because he doesn't showboat on the field. They'll also point out former Chicago Bears quarterback Jim McMahon was loathed by many because he was flashy instead of being the humble leader of a team he's supposed to be as a quarterback.

They have a point, which is why it seems to be about more than race for Newton. There's something about him that gets under people's skin more than others. Perhaps it's a combination of factors, from the alleged "fake smile" to the dabbing after first downs and touchdowns, to his feigning to rip open his shirt as if he's Superman.

"I had an argument the other day about how people say he doesn't show class and he smiles too much. I'm thinking to myself, 'Shouldn't you enjoy playing football?'" former Eagles, Redskins and Vikings quarterback Donovan McNabb said. "Nobody says anything when J.J. Watt starts to do the Nae Nae or when Aaron Rodgers Discount Double-Checks or Philip Rivers is barking at the opposing sideline.

"I love the excitement (Newton) brings to the game."

McNabb caught plenty of criticism during his career for similar reasons -- the smiling (even after making a poor play), the sourpuss when dealing with the media and the extended dances after touchdowns. Like Newton with Rivera, though, McNabb always had the support of his head coach in Philly with Andy Reid, who green-lighted McNabb's histrionics. 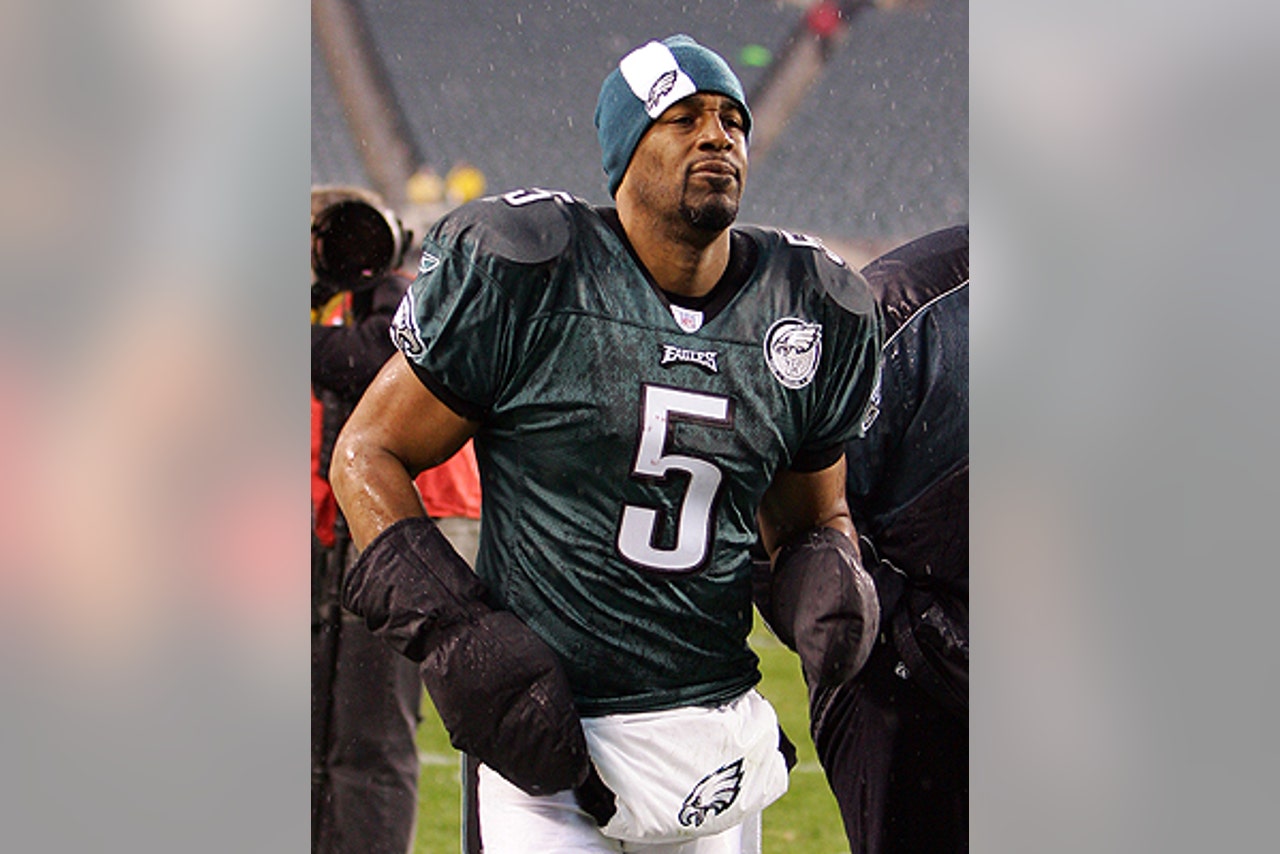 Early in his career, McNabb battled many of the perceptions facing Newton.

"The team is rallying behind him, he's a true leader, he does work in the community, he has his head coach doing the Dab," McNabb said. "They all give footballs to the kids in the stands now. And they get on the sideline after a win and they're all on the sideline together doing whatever they do, and they truly support this kid. They follow behind him, and that's what a leader is all about."

Moon says the most excitement he can recall showing on the field during a game was a hard spike of the football after an unexpected running play. Otherwise, he was from the act-like-you've-been-there-and-will-be-back school while trying not to bring too much attention to himself during the ups because he knew he'd get it all back in full during the downs.

Moon, who met Newton at one of his camps when Newton was a teenager but truly became close to him when he helped train him during the draft process, has openly stated he wishes Newton would tone down the dances a bit. But like McNabb, he understands the thinking behind them, which is that they spark the team, the crowd and the entire fan base.

And like McNabb, Moon sees Newton including his teammates in the celebrations. He sees Newton as -- avert your eyes, haters -- unselfish and humble.

"I talked to him about that a few weeks ago and I said, 'I'm proud of the way you're handling yourself. Stay humble.' He's been unbelievably humble," Moon said. "You listen to his interviews, he talks about his teammates and team all the time. Yes, he does bring attention to himself, but it's a celebration of him and his team. That is his personality; he's a very outgoing, fun-loving guy."

Tom Brady has fun. He's energetic. He's always screaming on the sideline and even barked at Steelers safety Anthony Smith after beating Smith deep. (Smith had guaranteed a Pittsburgh victory.) Rodgers got a national advertising campaign out of his end-zone title belt celebration.

Newton got a letter to the editor of the Charlotte Observer from a concerned mother wondering what she should tell her child about his dancing.

"That's a dog whistle. It's code," Edwards said. " 'How dare this n----- be as good as he is and, not just that, have the arrogance, the temerity, the self-confidence, the sheer guile to put it on display with a dance or a Superman gesture or a jump-and-bump? We don't like that down here. He's forgotten his place.' We can be honest. Let's call what's going on and then maybe we can begin to have a serious conversation on how we deal with it.

Moon agrees race is a factor, saying, "Some people aren't going to like him because of his skin color."

But Moon seems to think other factors are at play, including those who doubted Newton's skill set would translate to the NFL. Right now, with Newton slinging the ball all over the field and throwing darts even when he doesn't display proper footwork -- "His arm is so freakin' strong he can still get the football there," Moon said -- the notion Blaine Gabbert was even remotely in Newton's league during the draft process seems incredibly silly.

This game is the last stand for those doubters. It's Manning, the traditional pocket passer (albeit on the downside of his career), against Newton, the guy who set off alarm bells for some because he couldn't call a play for Jon Gruden and had never been under center in college -- concerns he's since put to bed.

Never mind that, as one defensive coach recently put it, "You can't defend him on third-and-3. You just have to hope somebody drops a ball or something." Broncos defensive coordinator Wade Phillips is surely concerned about how the multiple threats Newton brings could slow down his speedy defense.

Forget all of that. If Newton fails on Sunday, there will be those who still claim they were right about him years ago.

For those that don't, the sight of Cam dabbing on a parade float might make them nauseous. If so, don't give Newton all of the blame. It'll be partly due to an interview Moon did a few months ago in which he said he wishes he'd enjoyed himself more while playing in the NFL instead of being so reserved all the time.

Newton saw those comments and told Moon they registered with him.