San Francisco 49ers quarterback Colin Kaepernick continued his boycott of the national anthem Thursday night, taking a knee while "The Star Spangled Banner" was sung by a naval officer during the Chargers' 28th annual Salute to the Military.

Kaepernick wasn't the only player on the 49ers sideline to not stand during the anthem, as safety Eric Reid also kneeled.

Two-hundred-and-forty members of the military held the flag during the singing of the anthem before the final preseason game for both teams.

"I was in the Navy and I saw men and women bleed and die for this flag," Leo Uzcategui, a 20-year veteran, told the Associated Press before the game. "If he wants to do something, go to some outreach program where he can do some good. And I get it, his First Amendment right. But you don't sit during the presenting of the colors, and you don't sit during the national anthem. That is not the way to do it." 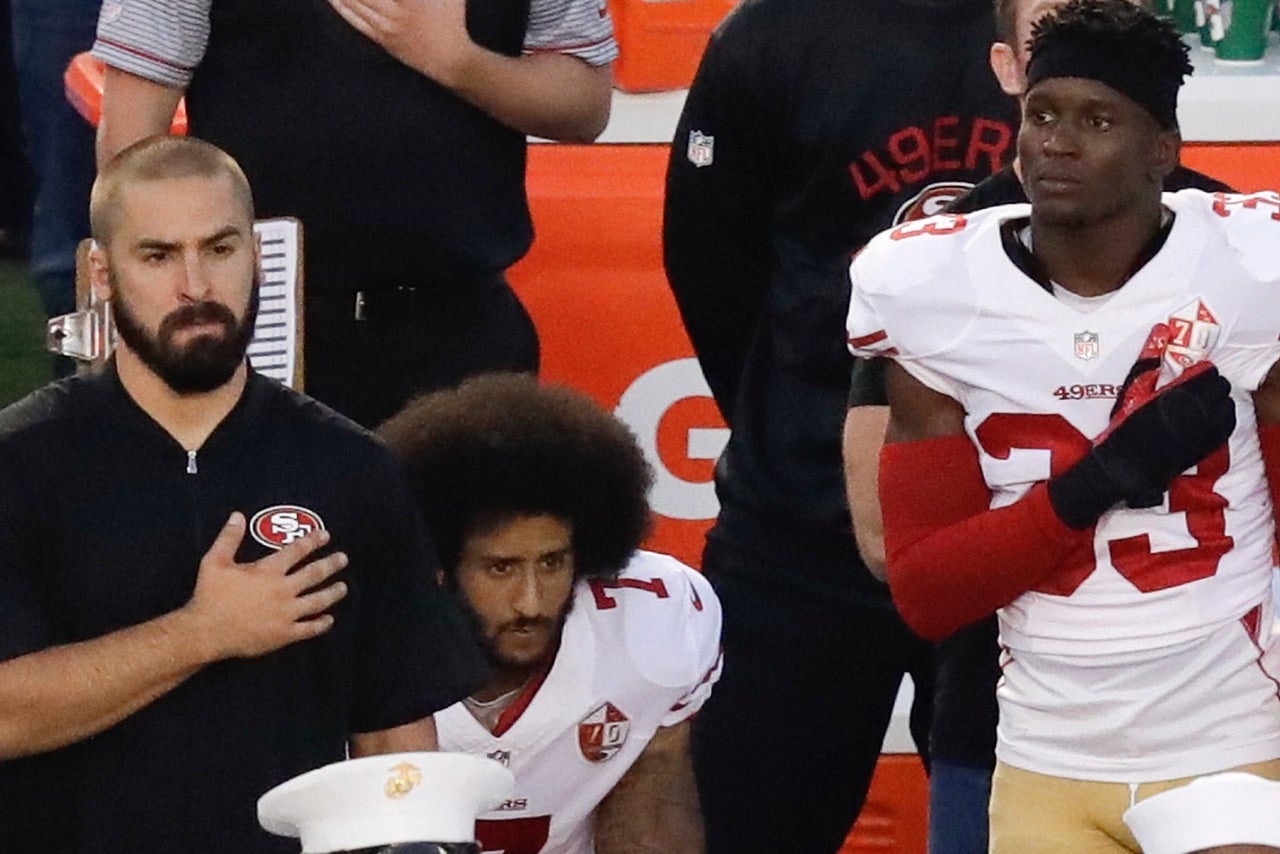 Kaepernick, who made his first start of the preseason Thursday, was booed by the San Diego crowd each time he touched the ball. He's battling with Blaine Gabbert for the 49ers' starting quarterback job.

Kaepernick looked good on the 49ers’ first drive, completing 6 of 8 attempts for 58 yards and added 30 rushing yards to lead San Francisco to an early touchdown.

In the second quarter, Kaepernick stood and applauded with other players when military members in the stands were asked to stand and be recognized for their service.

Kaepernick made waves last Friday, when he was seen sitting during the playing of the national anthem. He said the reason he refused to stand for the anthem was in protest of the treatment of African-Americans and minorities in the U.S.

"I am not going to stand up to show pride in a flag for a country that oppresses black people and people of color," Kaepernick told NFL Media in an exclusive interview after the game. "To me, this is bigger than football and it would be selfish on my part to look the other way. There are bodies in the street and people getting paid leave and getting away with murder."

In Oakland, Seahawks cornerback Jeremy Lane joined Kaepernick’s protest, sitting during the national anthem before Seattle's game against the Raiders.

Kaepernick has not stood for the anthem during any of the previous three preseason games, but it wasn't noticed the first two weeks because he wasn't in uniform. He had surgeries on his thumb, shoulder and knee in the offseason.

Can You Smell What Russ Is Cooking?
Russell Wilson is enjoying an MVP-caliber season. But, he’s going to need some help along the way, Martin Rogers writes.
1 day ago

Herd Hierarchy: Week 8
Brady's Bucs remain at the top, but Week 7 created a few major shakeups in Colin Cowherd's latest top 10.
3 days ago
those were the latest stories
Want to see more?
View All Stories
Fox Sports™ and © 2020 Fox Media LLC and Fox Sports Interactive Media, LLC. All rights reserved. Use of this website (including any and all parts and components) constitutes your acceptance of these Terms of Use and Updated Privacy Policy. Advertising Choices. Do Not Sell my Personal Info