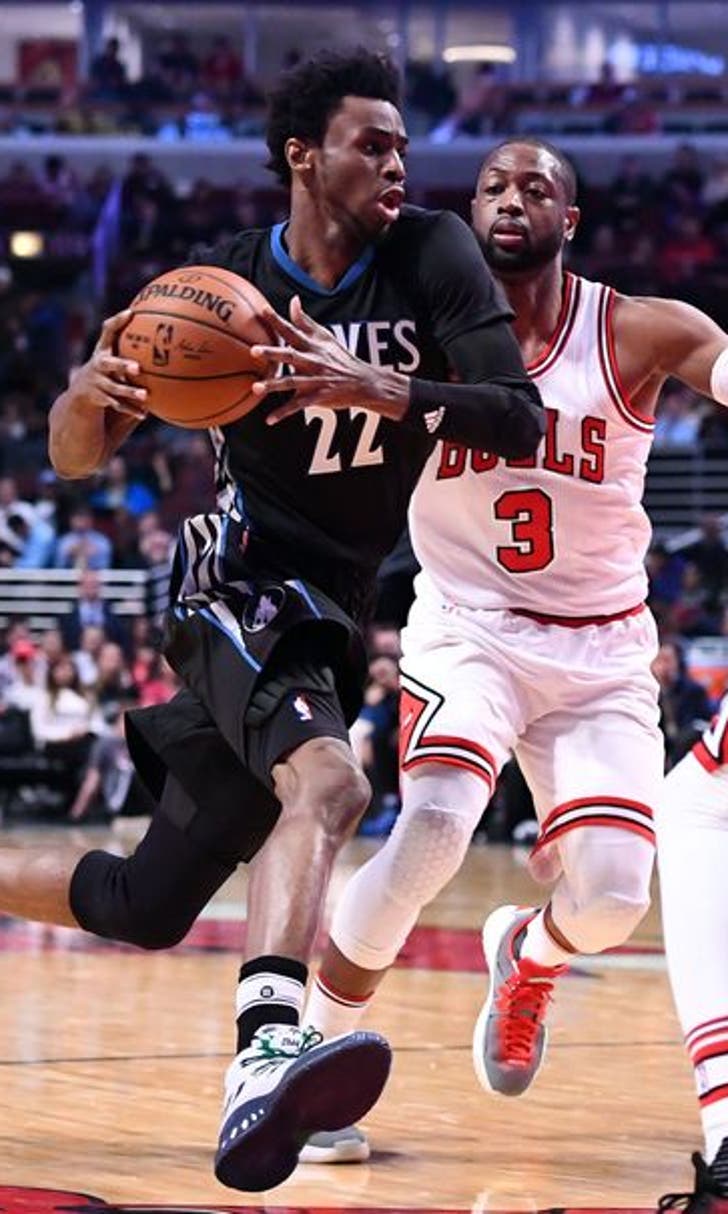 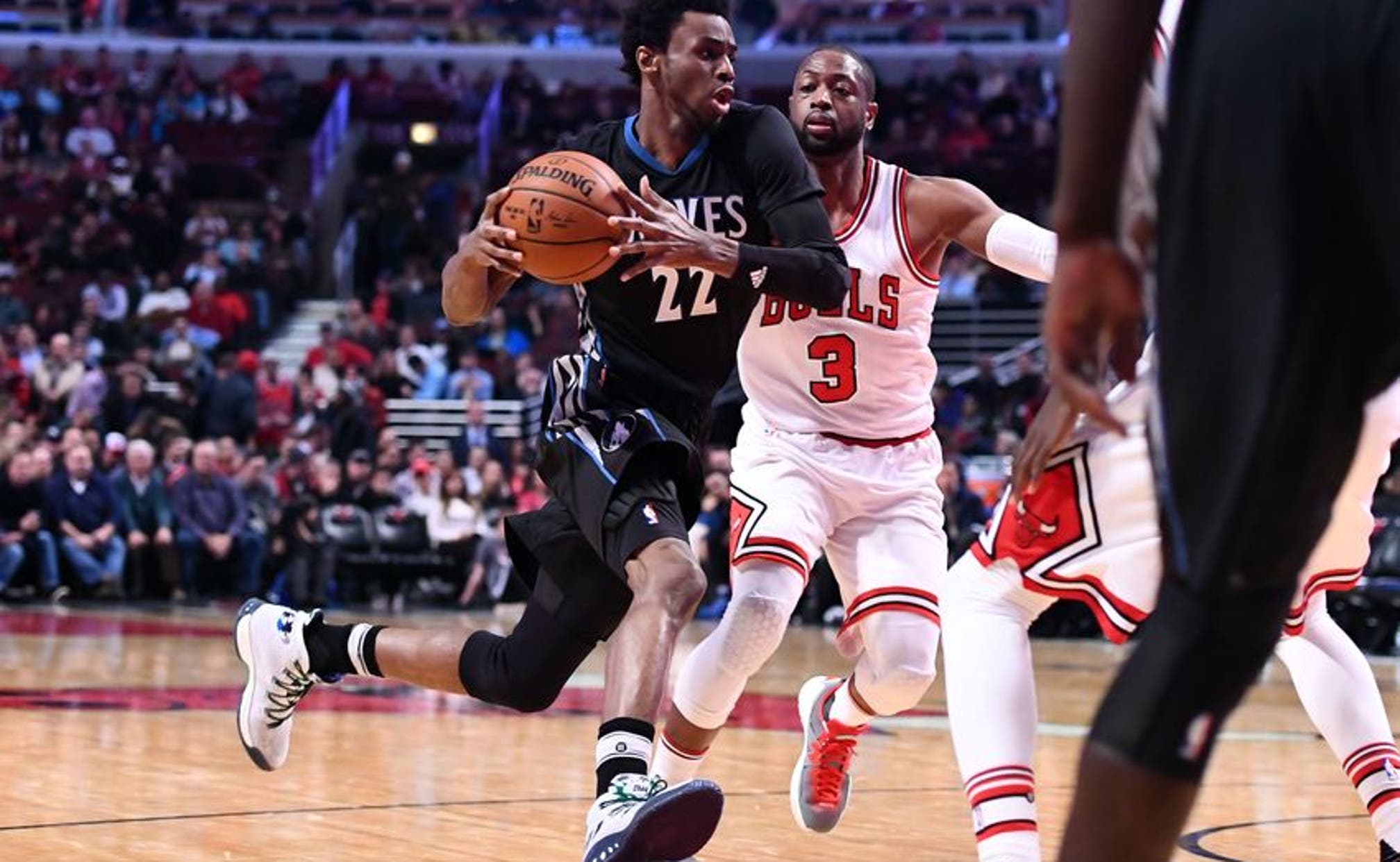 BY Fansided and Vilius Andrulionis/FanSided via Dunking with Wolves • December 14, 2016
share

Tom Thibodeau’s return to Chicago ended up to be a very enjoyable evening for both he and his Timberwolves team.

Timberwolves head coach Tom Thibodeau received a pregame standing ovation from the United Center crowd prior to his new team snatching the win despite being down by 21 points in the second quarter.

The win helped the Timberwolves avoid becoming the worst team in the NBA, as with a 7-18 record they now have a 0.5 game edge over the 76ers and the Mavericks on the season.

The Timberwolves trailed 26-6 early in the game before several three-pointers helped Minnesota cut the lead to 11 at one point, but the Bulls continued their tornado-like offense and won the first quarter by 16 points, scoring 38 to the Wolves’ 22.

The Wolves did manage to catch Chicago’s defense off-guard several times, but that failed to compensate for poor defense of their own. The figures of scoring in the paint basically tell the whole story: the Bulls were leading 22-4 in that department after first.

Nothing much changed in the beginning of the second quarter, either. The Bulls continued getting easy buckets under the basket and did not let Minnesota get much closer until the final mid-mark of the period.

However, at that point, it was as if the team controllers changed sides on NBA 2k17.

The Wolves started playing good defense, moving the ball and hitting the majority of the good shots they managed to create. That helped Minnesota orchestrate a 22-5 run and ultimately cut Chicago’s lead to just four points at halftime.

The beginning of the third quarter, somewhat surprisingly, was a continuation of Minnesota’s great ending to the second.

In what tends to be the Wolves’ worst period, they actually managed to take the lead for the first time in the game at 64-63. After that point, the teams went back-and-forth for the remainder of the quarter with the Timberwolves holding taking the slight edge heading into the fourth at 78-75.

The fourth started off in a similar fashion, as the Wolves took a five point after the first possession, which was their biggest lead of the game to that point.

After that, the teams continued to go back and forth. The problem for Wolves, once again, was poor interior defense, including continuous failures to get defensive rebounds. Minnesota did, however, manage to make up for it by getting offensive ones under Chicago’s basket.

With the score at 91-91 and slightly over a minute left, Andrew Wiggins hit a long-jumper, Zach LaVine got two on a fast-break and the Wolves’ lead moved to four points.

Good defense on Jimmy Butler and Dwyane Wade then lead to frustration of the latter. Wade was furious after what he believed to be a wrong no-call by the officials after missing a shot after a lot of contact against two of the Wolves’ players. His outburst resulted in an ejection and two extra free-throws for Minnesota, and that was basically it.

Character: The Timberwolves have wasted so many leads in the second halves of games that their mental toughness and self-esteem seemed to be extremely low. However, this game was a different story.

Minnesota decided to switch things up a bit and give up the first quarter instead of third. They then worked consistently to get back in the game in the second and into the third quarters. The fans’ worst nightmare this season, the third quarter, was won by seven points and good composure in the clutch minutes of the fourth resulted in a confident win against a strong Bulls team.

Post Defense: While the scoring in the post was almost equal if we don’t count the first quarter, it had more to do with Minnesota’s good and smart offense than a reliable defense.

With the Bulls being the worst three-point shooting team in the league, it simply doesn’t make sense to simply allow them to score easy points under the basket. It should be noted, however, that down the stretch in the fourth the Timberwolves showed they can play good interior defense when they want to expend the effort.

What I really liked about this game was that there was no clear leader on the Timberwolves that was relied on completely.

Instead, many players contributed, which made it harder for the Bulls to target just one or two guys. LaVine, however, was the one player who seemed to be everywhere. He made crucial baskets, marking the turning points of the game.

LaVine scored, found open teammates, and shot and moved the ball well. However, every starter could deservedly be mentioned in this section instead of him.

Stat of the Night

Points in the paint: The final stat line may not look that alarming, even though the Bulls outscored Minnesota 56-36 in the post. However, with the Wolves not hitting many three-pointers that could have easily sealed the deal in Chicago’s favor if it wasn’t for good mid-range shooting.

The Timberwolves have to limit opponents’ strengths by forcing them to play a game they aren’t comfortable with. Minnesota managed to win even without taking full advantage of the Bulls’ weaknesses, but next time they may not be so lucky.

The Wolves will now have three consecutive days off before hosting the Houston Rockets on Saturday at Target Center. The Rockets have started the season with an impressive 17-8 record and will quite possibly come to Minnesota with an even better record as they still encounter the Kings and the Pelicans prior to the game against Timberwolves.