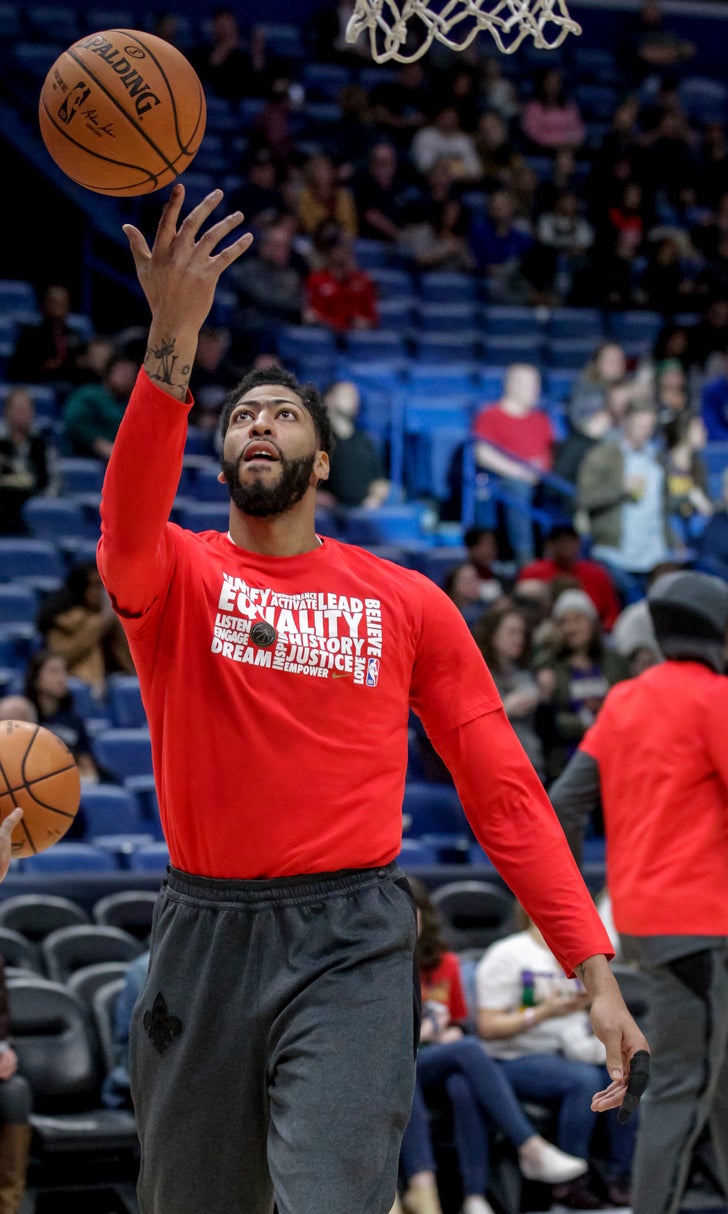 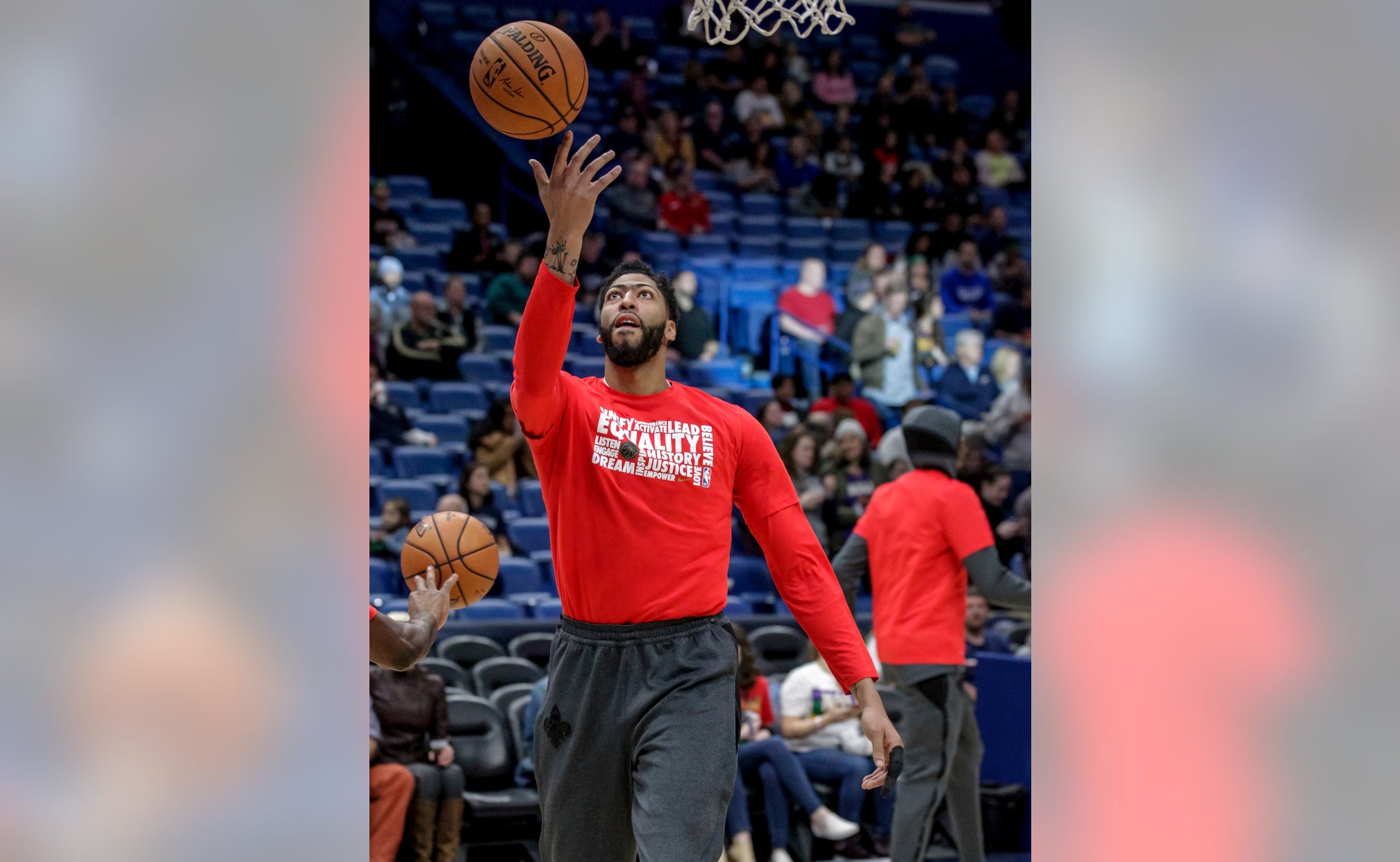 NEW ORLEANS (AP) — Even with one foot out the door, Anthony Davis is showing he can still produce prolific statistics for the New Orleans Pelicans.

He only needed 25 minutes to score 32-points in his first game for New Orleans since requesting a trade nearly two weeks ago. Davis also had nine rebounds and three blocks in a 122-117 win over the Minnesota Timberwolves on Friday night.

Whether his presence in the lineup is sustainable for a club that is trying to move on without him — and protect his trade value by keeping him healthy — remains to be seen. But for now, coach Alvin Gentry and other Pelicans veterans sound inclined to try to make it work.

"He's obviously made it known that he won't sign back, but he still loves the game of basketball. I know that he loves us as players, and he's going to go out there and play as hard as he can," Pelicans point guard Jrue Holiday said. "If Anthony's out there, that's the best chance of us winning."

The Pelicans entered their game at Memphis on Saturday night at 25-31, five games behind the Los Angeles Clippers for the Western Conference's final playoff spot with 26 games left.

When Davis initially made his trade request public through his agent, Rich Paul, Davis' image was largely removed from the Pelicans' website and promotional material. Gentry also started providing more playing time to younger players the club wants to develop.

But after Thursday's trade deadline passed without a deal to move Davis, the Pelicans had to decide if they were willing to defy NBA rules by shelving their healthy six-time All-Star. For now, they've put him back in the starting lineup, albeit on reduced playing time as he works his way back from a sprained left index finger that had sidelined him since Jan. 18.

On Friday night, Davis was kept on the bench in a tense fourth quarter despite the teams being separated by as little as one basket several times in the waning minutes.

Gentry said he limited Davis' minutes because it had been weeks since he played.

"I was not going to have him — first game back — play 38, 40 minutes," Gentry said. "I thought he played well the minutes that he was in there and did a great job. He was typical Anthony."

Gentry is hoping to find a balance that allows Davis to play — and hopefully stay healthy — while allowing other front-court players like the resurgent Jahlil Okafor and third-year pro Cheick Diallo to get meaningful minutes.

"We talked about that a lot. Some kind of way, we have to keep those guys in the rotation and keep them available," Gentry said. "Obviously, they may not play the amount of minutes that they've been playing ... but I do think that we have to keep them in the rotation and put them in situations where we can see how their development is going and see how they are against the better players in the league and playing with our better players."

The Pelicans have made Holiday the face of the franchise since Davis' trade demand. The veteran guard, who is in the second year of a five-year, $126 million contract, said he understands the inherent conflict between focusing on players who are committed to the franchise long-term and playing Davis. But he added, "I think we're still trying to win. Having Anthony on our team and Anthony on the court, in my opinion, is our best chance of winning.

"So I guess maybe there's a little give and take," Holiday continued. "Maybe you don't play him 38 minutes or whatever. ... But if you want to develop guys, we can probably find different slots."

Gentry said he wasn't concerned that his players might be distracted during home games by boos directed at Davis.

"We're in a hell of a lot of trouble if we're going to let boos determine if we play hard or not," Gentry said.

The coach also sounded confident that team chemistry would not be undermined.

"When you're a competitor, when you step out between the lines, you're going to play basketball and you're going to try to do the best you can with your other teammates to try to win the basketball game," Gentry said. "I think that's where we are right now. The shock of the whole thing is over. Obviously he said he doesn't want to be here; he wants to be traded. All that has been known. Now what we're trying to do is bring back some normalcy to the whole situation and what can we do as coaches and what can we do as teammates to try to win basketball games."

Davis said he has no regrets over how he's handled the matter.

"I never regret anything I do," he said.

He also said he would have understood if the Pelicans insisted on not playing him.

"Obviously, it's a business," Davis said. "I know their standpoint on it and I was prepared for that."

A Big Liability In Brooklyn
How do sportsbooks react to blockbuster trades? How much money is on the Nets? And is there any value? Sammy P asked the experts.
41 mins ago