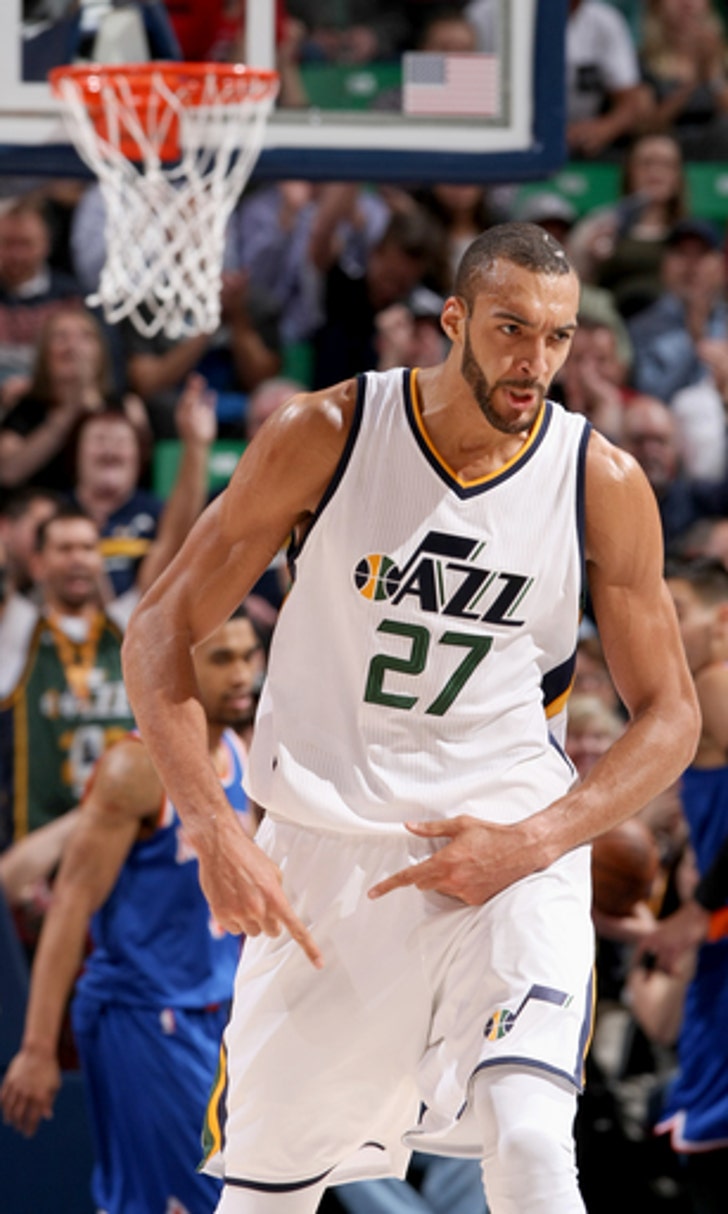 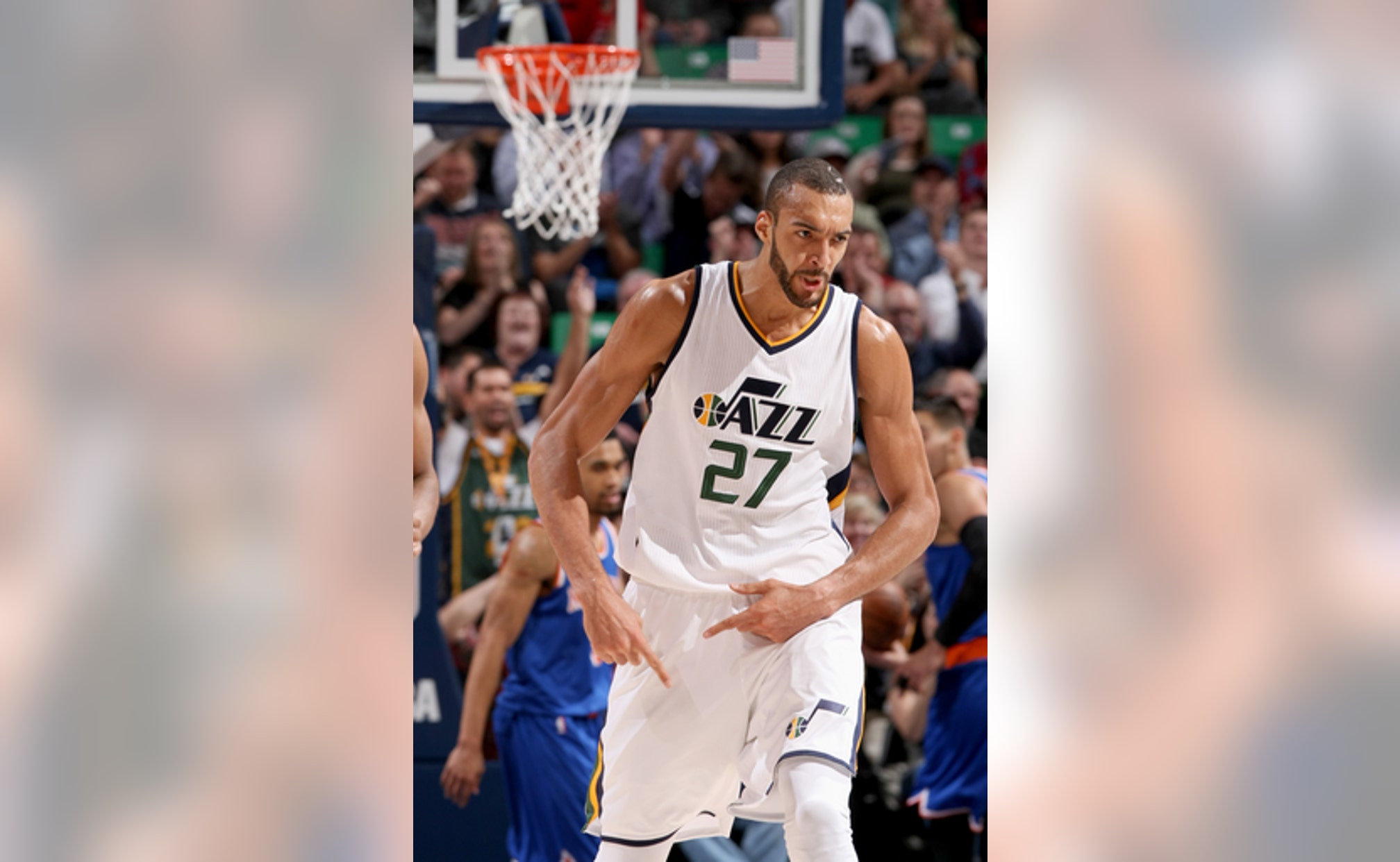 SALT LAKE CITY (AP) Rudy Gobert is in the running for Defensive Player of the Year, but it was his offense that had the bigger impact Wednesday night.

Gobert scored a career-high 35 points and grabbed 13 rebounds, and the Utah Jazz rallied from 13 down to defeat the New York Knicks 108-101. That kind of production was unheard of three seasons ago as he spent time in the NBA Development League as a rookie.

''I'm working,'' Gobert said with a smirk. ''I'm just working every day and keep watching film and keep building chemistry with my teammates. I feel more confident and my teammates believe in me even more.

''I just try to set good screens and get my teammates open. Tonight, I was able to get behind the defense and get on those balls. ... I wasn't really thinking. Just keep playing play after play.''

The Jazz snapped a three-game losing streak, while the Knicks dropped their third in a row.

Gobert carried the Jazz throughout with the 7-foot-1 Frenchman scoring off pick-and-rolls, offensive rebound put-backs and even going full-court for a dunk after a steal. The Jazz struggled on offense, but Gobert connected on 13 of 14 shots. Eleven of his 13 rebounds were offensive.

''His size and his length were a huge factor,'' Jazz coach Quin Snyder said. ''If he doesn't play that way, we don't win.

''If you attack the rim and you don't settle and you play with force on offense, with Rudy, if you just get the ball up on the basket, he's got a chance to tip it in. ... He's so long, it's tough to get him off the glass. It starts with a chain reaction of those guys driving.''

Gordon Hayward finished with 19 point and eight rebounds for the Jazz.

The Knicks controlled the entire first half and led 55-51 at halftime, including a 13-point advantage in the second quarter.

''We sometimes, the bigs, we overcommitted and that way Gobert was able to get all of those tip-ins,'' Porzingis said, ''and second-chance points and that is what hurt us.''

Knicks: Rose looked like his old self in the first half with 12 points and five assists, but headed to the locker room in the third quarter with a sore right ankle. He did return. Rose was seen limping through the hallways postgame and coach Jeff Hornacek said X-rays on the joint were negative.

Jazz: The organization hosted a 20-year reunion for the 1997 Finals team, including a ceremony at halftime. Former coach Jerry Sloan and John Stockton attended, but Karl Malone did not. Knicks coach Jeff Hornacek was on that team and has his No. 14 retired by the team. ... Derrick Favors missed his sixth consecutive game with a left knee bone contusion.

''You can't think you are going to semi-box him out, he's going to reach over the top,'' Hornacek said. ''He's long and he is strong, you got to crack him and hit him hard. We just didn't do that.''

Stockton is not a fan of the NBA trend of resting players during the regular season.

The Hall of Famer said it takes away from the mental and physical toughness of players and other factors that are part of the game.

Stockton remembered going to a baseball game and the player he wanted to see was on a rest day.

''I was incensed,'' Stockton said. ''I've never rooted or really particularly cared for that guy since. Fair or unfair, it's just what I believe in. People paid to have the best competition you can put out on the court on any given night out there. Whoever it is. If you're hurt, that's one thing.

''You can say science, you can say championships, you can say whatever. I think we have a duty to be present and lay our best out there every night.''

Knicks: Travel to face Damian Lillard and the Portland Trail Blazers on Thursday.

Jazz: Travel to face the Los Angeles Clippers on Saturday in a matchup of teams fighting for the No. 4 Western Conference playoff seed.

Goin' Back-2-Back
The Greek Freak beat out The King to win his second straight NBA MVP award on Friday. Did voters make the right call?
2 hours ago

Bring Out The Brooms?
This LA-Denver series won't be anything like the one from last round says Jason McIntyre, who shares his WCF betting tips.
2 hours ago

Masters of Adversity
A double-digit deficit seems to be the main source of motivation for the Miami Heat in the Eastern Conference Finals.
18 hours ago

Something Special
The Miami Heat have won 9 of 10 so far this postseason. So when will folks start to get on the bandwagon?
1 day ago

Remembering the 2009 WCF
The Lakers and Nuggets have history in the West Finals, highlighted by a dogfight between Kobe and Carmelo back in '09.
1 day ago
those were the latest stories
Want to see more?
View All Stories
Fox Sports™ and © 2020 Fox Media LLC and Fox Sports Interactive Media, LLC. All rights reserved. Use of this website (including any and all parts and components) constitutes your acceptance of these Terms of Use and Updated Privacy Policy. Advertising Choices. Do Not Sell my Personal Info