Stanton hit in face by pitch, chaos then ensues in Milwaukee

The Miami Marlins lost much more than a game Thursday night. They've likely lost slugger Giancarlo Stanton for the rest of the season after a frightening scene at Miller Park.

Stanton sustained multiple facial fractures, dental damage and cuts that needed stitches after being hit in the face by a fastball from Milwaukee's Mike Fiers.

The Marlins said Stanton, the major league RBI leader and a top candidate for the NL MVP award, would return to Miami on Friday.

Stanton's father was at the game and came onto the field while his son was treated. Stanton was bleeding heavily from his mouth, and was driven away from the plate in an ambulance. His dad rode with him to the hospital.

Asked if Stanton could play again this season, Marlins manager Mike Redmond said, "It does not look good."

"It's devastating for us. Devastating. For his season to end like that, I mean, that's not good," Redmond said.

"It was very, scary," Redmond said. "We're hoping he is going to be all right."

It was ruled that Stanton swung trying to get out of the way of the 88 mph pitch from Fiers. Reed Johnson batted for Stanton and was hit in the hand by Fiers' next pitch, causing the benches to empty.

It was also ruled that Johnson swung at the pitch that hit him, ending the inning with two runners on base.

Redmond was upset with the strike calls.

"I've never seen anything like that and I've definitely never seen two swings called on those two plays," Redmond said. "I've never seen a guy get hit in the mouth and called for a swing. He's out there bleeding at home plate and for the first base ump to say he swung at that pitch, what a joke."

Plate umpire Jeff Kellogg said he consulted with first base umpire D.J. Reyburn and determined that both Stanton and Johnson had swung.

"We've both looked at it and, yes, he did swing. They both did, at those pitches," Kellogg said.

Redmond and Johnson said the benches cleared because of the reaction by Fiers after Johnson get hit. Fiers threw up his hands and looked into the Marlins' dugout.

Fiers said he didn't want to get into what happened after Johnson was hit.

"It was heat of the moment stuff," Fiers said. "I just want to make sure that Stanton is OK. I just want to send my thoughts and prayers and everything to Stanton.

"You never think of throwing at somebody like that. Never in my life has that happened. I just feel very, very sad that I hit him. I'm sorry to their teammates, their fans, his family. It is just tough." 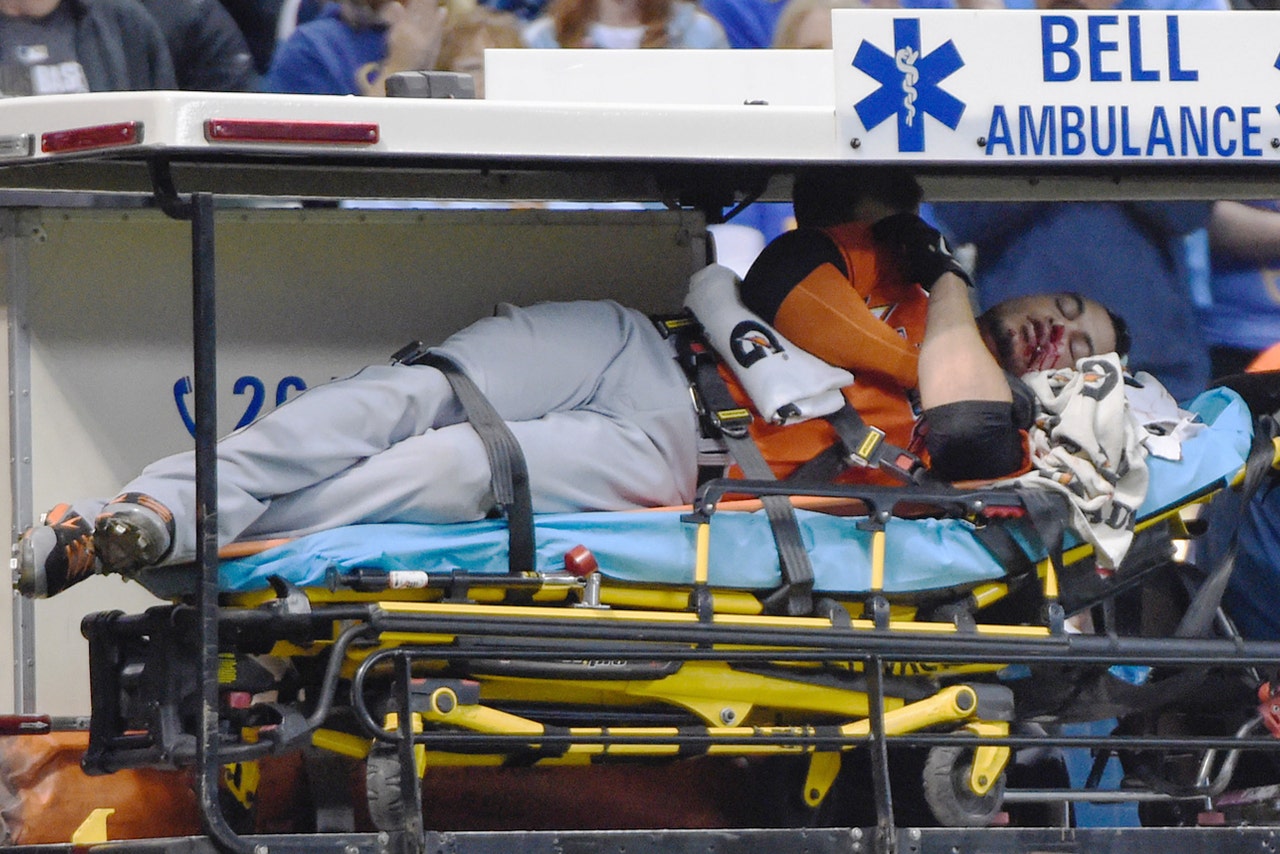 Giancarlo Stanton is taken off the field on a stretcher in an ambulance after being hit in the face with a pitch during the fifth inning Thursday. The following batter was also hit, and chaos erupted from there.

Ryan Braun and rookie Matt Clark hit home runs for Milwaukee. The Brewers are 1 1/2 games behind Pittsburgh for the second NL wild-card spot.

Fiers (6-2) pitched five innings. He is 6-1 since being recalled from the minors to join the rotation Aug. 9. Francisco Rodriguez pitched a scoreless ninth to record his 41st save in 46 chances.

Marcell Ozuna hit his 23rd homer in the eighth, a two-run shot. Ozuna homered in his fourth straight game, tying a team record.

Marlins: RHP All-Star Henderson Alvarez is set to return to the mound Friday as he missed his last start after straining his oblique Sept. 1.

Brewers: Braun was back in the starting lineup after not starting the past two games as he nurses a thumb injury.

Brewers: RHP Kyle Lohse (5-2) will start the opener of Milwaukee's three-game series with Cincinnati to end an 11-game homestand. The Reds will counter with RHP Mat Latos (5-5).

Grateful Dead, Phish & A Wild Series
Songs from the Grateful Dead & Phish brought joy to fans during the World Series broadcast. Martin Rogers has the story.
17 hours ago