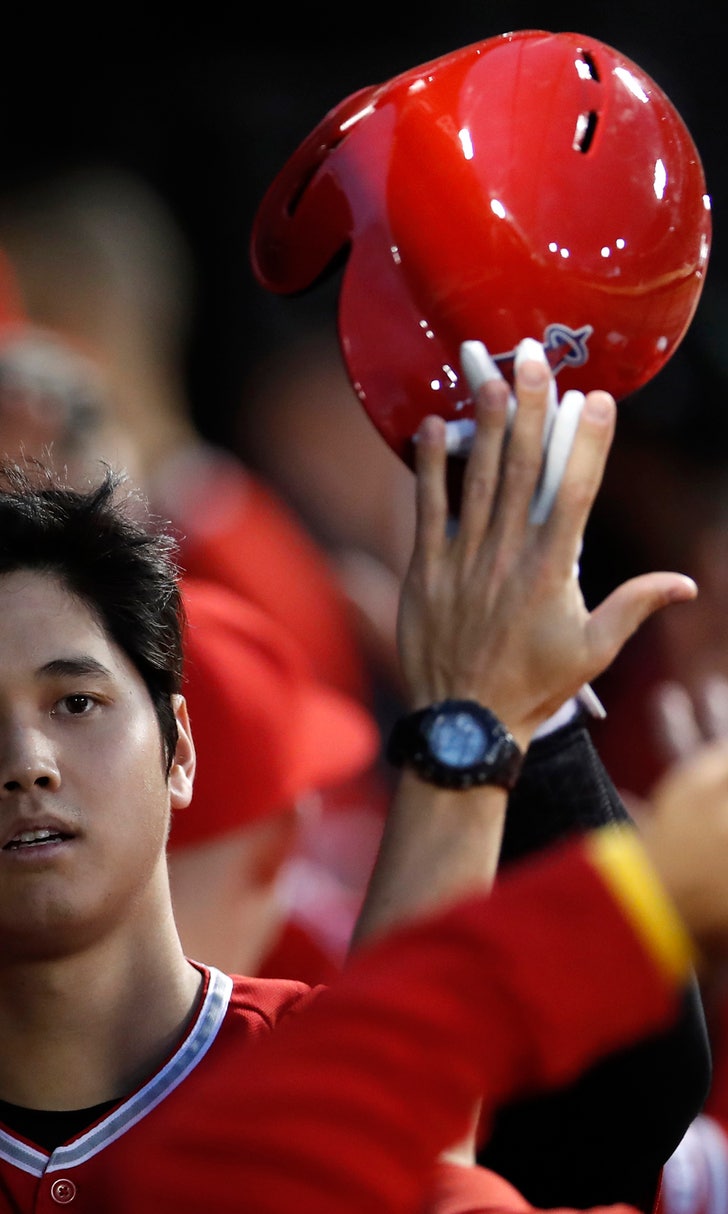 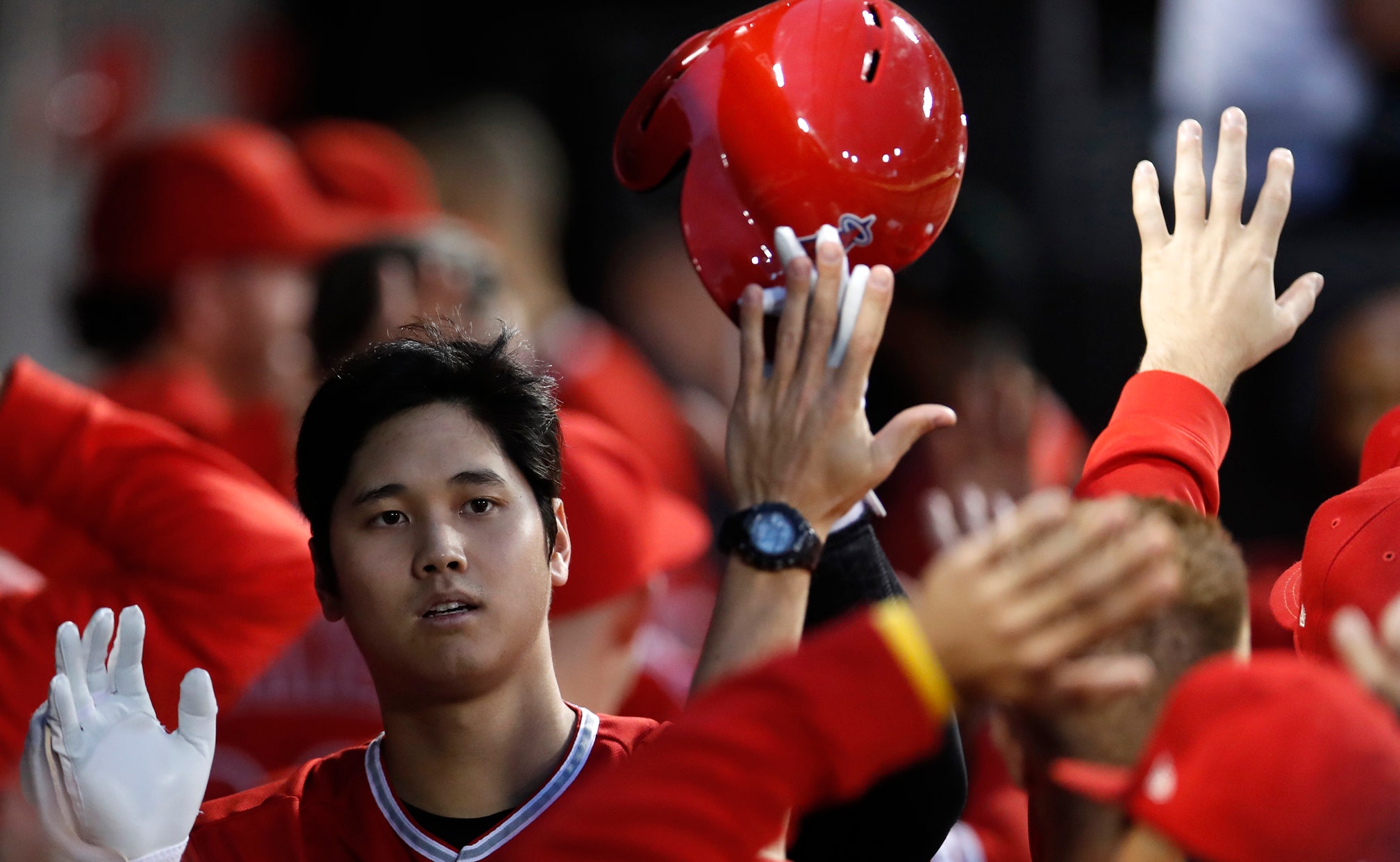 Ohtani hit a three-run home run and drove in a career-high five runs to help the Los Angeles Angels to an 8-7 victory over the Chicago White Sox on Saturday night.

"I'm not only happy with the results but the process and how I'm feeling at the plate," Ohtani said through an interpreter.

Ohtani finished with three hits and was a triple shy of hitting for the cycle.

Albert Pujols and Kevan Smith added two hits apiece for the Angels, who have won 10 of 11 against Chicago.

Jose Abreu homered and drove in four runs, and Yoan Moncada had three hits for the White Sox, who have dropped 10 of 12. Tim Anderson went 2 for 5 to raise his AL-leading average to .334, six points ahead of DJ LeMahieu of the New York Yankees.

Abreu hit a three-run home run — his 30th — off Luis Garcia to pull the White Sox within one run in the seventh.

The Angels loaded the bases in the ninth with a single, intentional walk to pinch-hitter Mike Trout and another walk. Brian Goodwin lined out to first to end the threat.

Hansel Robles pitched a perfect ninth for his 20th save in 23 opportunities.

Ohtani homered off Dylan Covey (1-8) to give the Angels a 5-2 lead in the third. The opposite-field shot was the designated hitter's 17th homer of the season. Ohtani is 11 for 24 against the White Sox this season.

He became the first Japanese-born player to have five RBIs and a stolen base in a major league game.

Carson Fulmer replaced Covey and walked two straight to bring in a run. Another run scored on a wild pitch for a 7-2 Angels lead. Centerfielder Adam Engel ran into the fence to make a catch and end the inning.

Covey, who was recalled from Triple-A Charlotte on Tuesday, was charged with seven runs and seven hits in 2 2/3 innings. His last victory was May 31 against Cleveland.

"I felt good, but I need to find a way to get better," Covey said.

Andrew Heaney (4-4) struck out eight and allowed four runs in six innings for the Angels. He was 2-0 with a 2.10 ERA in four previous career starts against the White Sox.

"He was solid," Ausmus said. "He always gives you a chance to win."

Ohtani hit a two-run double to give the Angels a 2-0 lead in the first.

Abreu's sacrifice fly in the bottom of the first gave him a career-high 108 RBIs and cut the Angels' lead to one. James McCann doubled to tie the game.

The White Sox pulled within 7-4 in the fifth on Anderson's double and Moncada's single.

Smith homered off Jose Ruiz to extend the Angels lead to 8-4 in the seventh.

Ohtani, who is returning from Tommy John surgery, said he will resume throwing after the Angels return to Anaheim on Monday. He has not pitched this season.

Bench coach Joe McEwing is leading the White Sox while manager Rick Renteria recovers from surgery on Friday to repair his right shoulder rotator cuff. He is expected to return Tuesday, when the White Sox host Kansas City.

"He's recovering well," McEwing said. "He was able to get a lot of sleep, much-needed sleep."

Angels: OF Mike Trout (right toe discomfort) was out of the starting lineup Saturday. He pinch hit in the ninth, drew an intentional walk and was removed for a runner. Trout exited Friday's game in the fifth inning and is considered day to day. ... 1B Albert Pujols returned to the starting lineup after sitting out Friday due to an illness. ... INF Tommy La Stella (broken right tibia) took part in live batting practice again on Saturday. Manager Brad Ausmus said he is unsure when La Stella will return. He has been on the IL since July 3.

RHP Jaime Barria (4-7, 6.27 ERA) is expected to start for the Angels in the series finale Sunday against the White Sox and RHP Dylan Cease (3-7, 6.75). Barria is seeking his first victory since July 24. Cease struck out a career-high 11 in 6 2/3 innings against Cleveland in his last start.