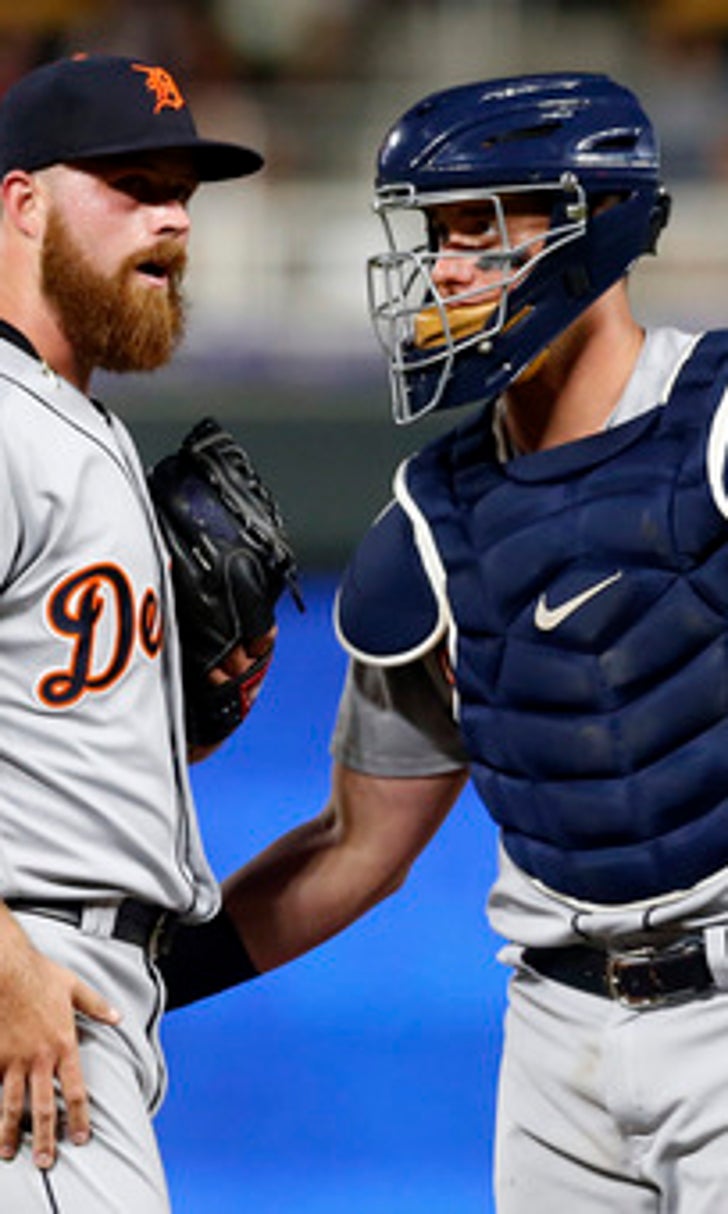 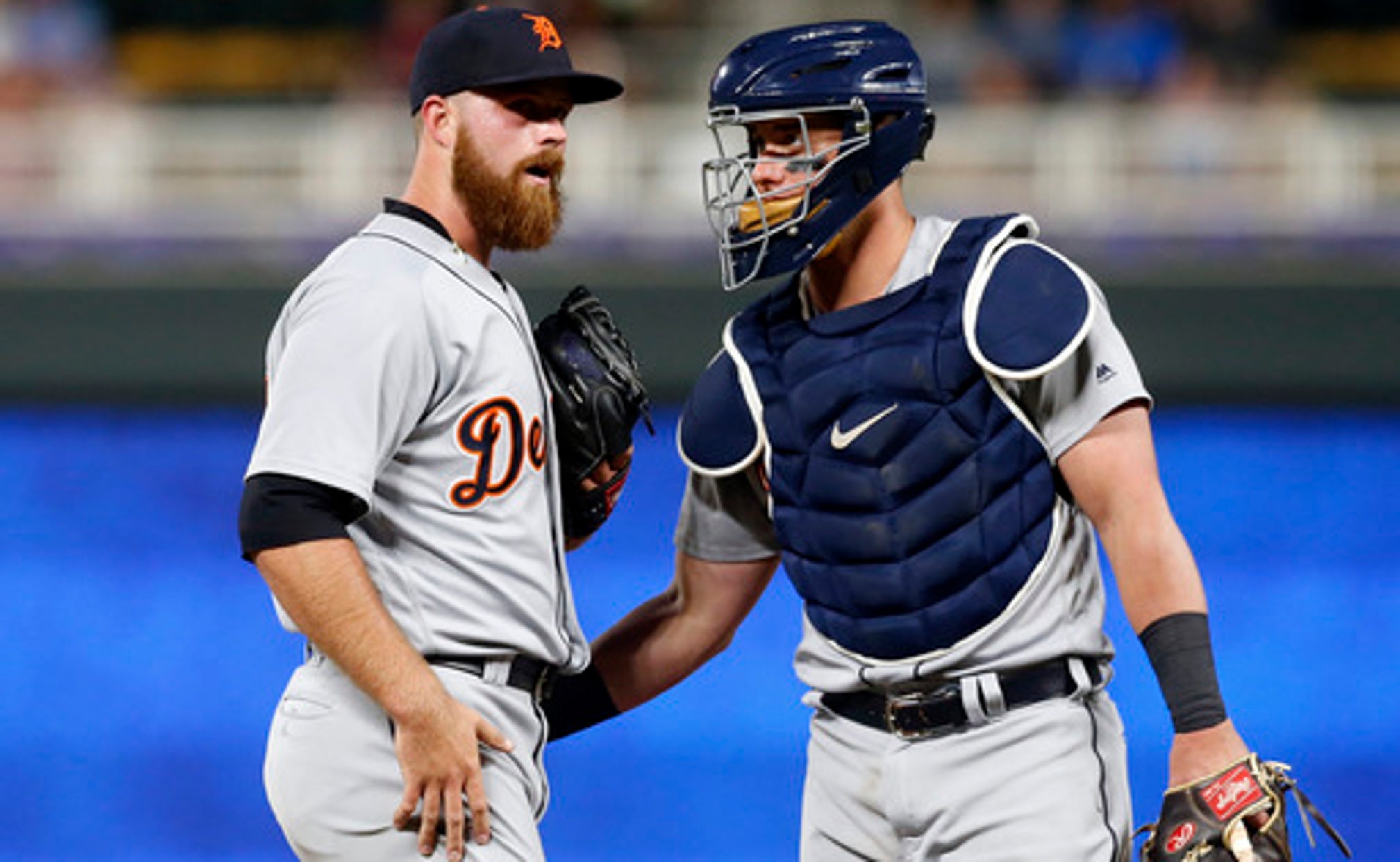 MINNEAPOLIS (AP) Lance Lynn walked off the mound in frustration Tuesday, despite his most efficient outing for the Minnesota Twins.

After pitching well for a season-high 6 2/3 innings, hitting a batter and walking another to end his night left a sour taste in the right-hander's mouth.

Brian Dozier drove in three runs with a pair of doubles to back Lynn, and Minnesota cruised to a 6-0 victory over the Detroit Tigers.

Lynn (2-4) lowered his jumbo ERA from 7.47 to 6.34 in his ninth start of the year, striking out four and walking one while giving up five hits.

''It felt good until the end,'' Lynn said. ''When you hit a guy and walk a guy, it really puts a damper on a pretty good outing up until then. There's still work to do. It's not as good as it can be, but it's a lot better than it's been.''

''In between, there was something, a little spasm,'' Boyd said. ''I wasn't getting through it and they saw something. I didn't really feel any different outside of the spasm. I felt the spasm and that's it. Just playing it safe.''

Boyd gave up two runs, one hit and a season-high four walks.

The Tigers were 0 for 6 with runners in scoring position and have scored 13 runs while losing six of their past seven games.

''Sure, you get behind a little bit, I think everybody's starting to press a little bit,'' Gardenhire said. ''This has been a long stretch of baseball games. We've just got to grind through it. There wasn't as much enthusiasm on the bench, and that's my fault. I was kind of sitting there figuring out how we were going to get through it. I went and told those guys tonight, `We'll bring it tomorrow.'''

Lynn entered with an average of seven walks per nine innings this season, more than double his career mark coming into the year.

He stranded four runners over the first three innings, getting a pair of double plays. He retired 12 of 14 at one point but left after hitting Jacoby Jones with a pitch and walking Jose Iglesias in the seventh. Ryan Pressly struck out pinch-hitter Mikie Mahtook to end the inning.

''He threw a lot of strikes,'' Minnesota manager Paul Molitor said of Lynn. ''I know he wasn't happy to walk his last hitter of the night, but overall, again, he protected the bullpen. Scoreless game for a while, but he kept putting zeros up for us and gave us a chance.''

Dozier's big night was a good sign for the struggling leadoff hitter. He entered with four hits in his last 33 at-bats (.121 average) with one RBI in nine games. Dozier had been taking extra batting practice in recent days.

''During the course of the year you get out of sync and stuff; just a couple things to get back to locked in and feeling good for a little while now,'' he said.

Tigers: Detroit signed LHP Kevin Chapman and assigned him to Triple-A Toledo. Chapman, who last pitched in the majors in 2016 for Houston, was playing in an independent league with the New Britain Bees.

Twins: Minnesota recalled OF Ryan LaMarre from Triple-A Rochester to take the spot that opened when RHP Phil Hughes was designated for assignment. LaMarre has hit .314 in 21 games with the Twins this season. ... The Twins acquired 1B Chris Carter from the Los Angeles Angels for cash. Carter, who led the National League with 41 home runs in 2016, was hitting .255 with 13 homers in 38 games at Triple-A Salt Lake and he'll report to Triple-A Rochester.

Tigers: 3B Jeimer Candelario is heading to Toledo to begin a rehab assignment. Candelario has taken batting practice before games as he makes his way back from left wrist tendinitis. He could join Detroit this weekend against the White Sox. ... 1B Miguel Cabrera continues to take pregame batting practice but there is no timetable for his return or a potential rehab assignment.

Twins: Molitor said 1B Joe Mauer had a good day as he deals with a neck strain and concussion-like symptoms. Mauer will do some light exercise on Wednesday. ... 3B Miguel Sano homered in a rehab start for Triple-A Rochester. Sano could rejoin the team Friday in Seattle.

Detroit RHP Michael Fulmer (1-3, 4.35 ERA) stars the series finale, with Minnesota sending RHP Kyle Gibson (1-2, 3.96) to the mound. Fulmer allowed three runs over 6 1/3 innings in a no-decision against the Mariners last time out. Gibson lost his last start after giving up five runs in 5 1/3 innings at home against Milwaukee.