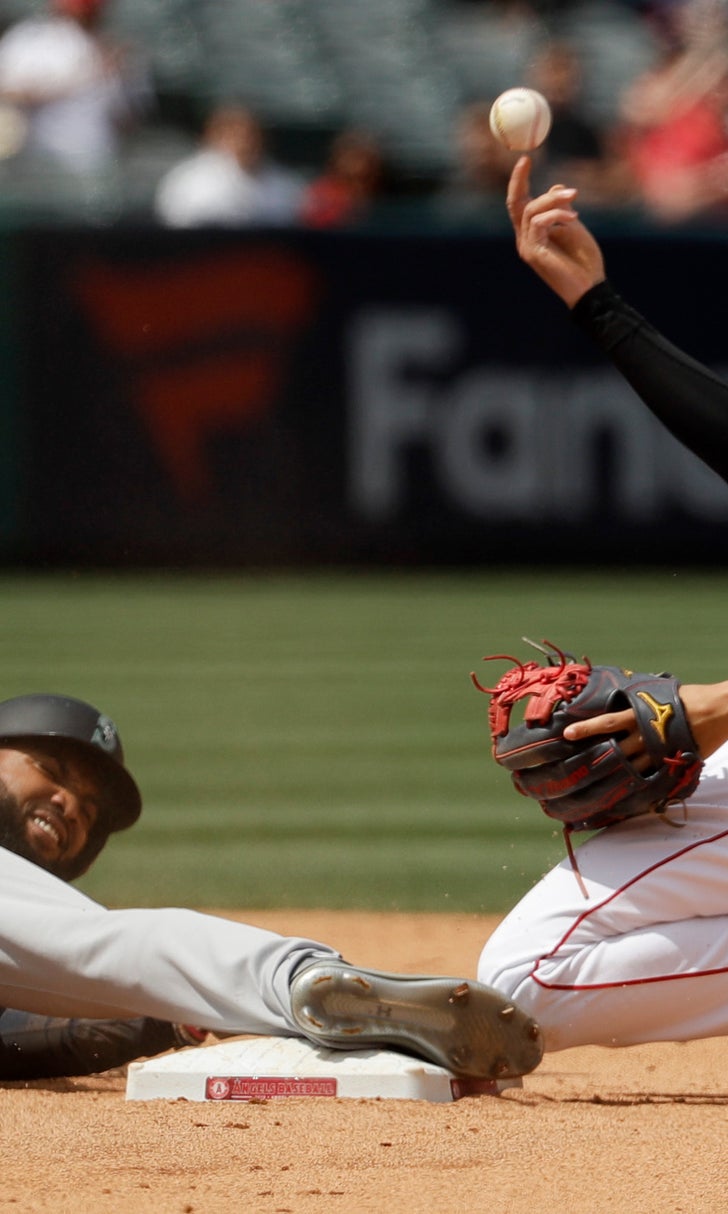 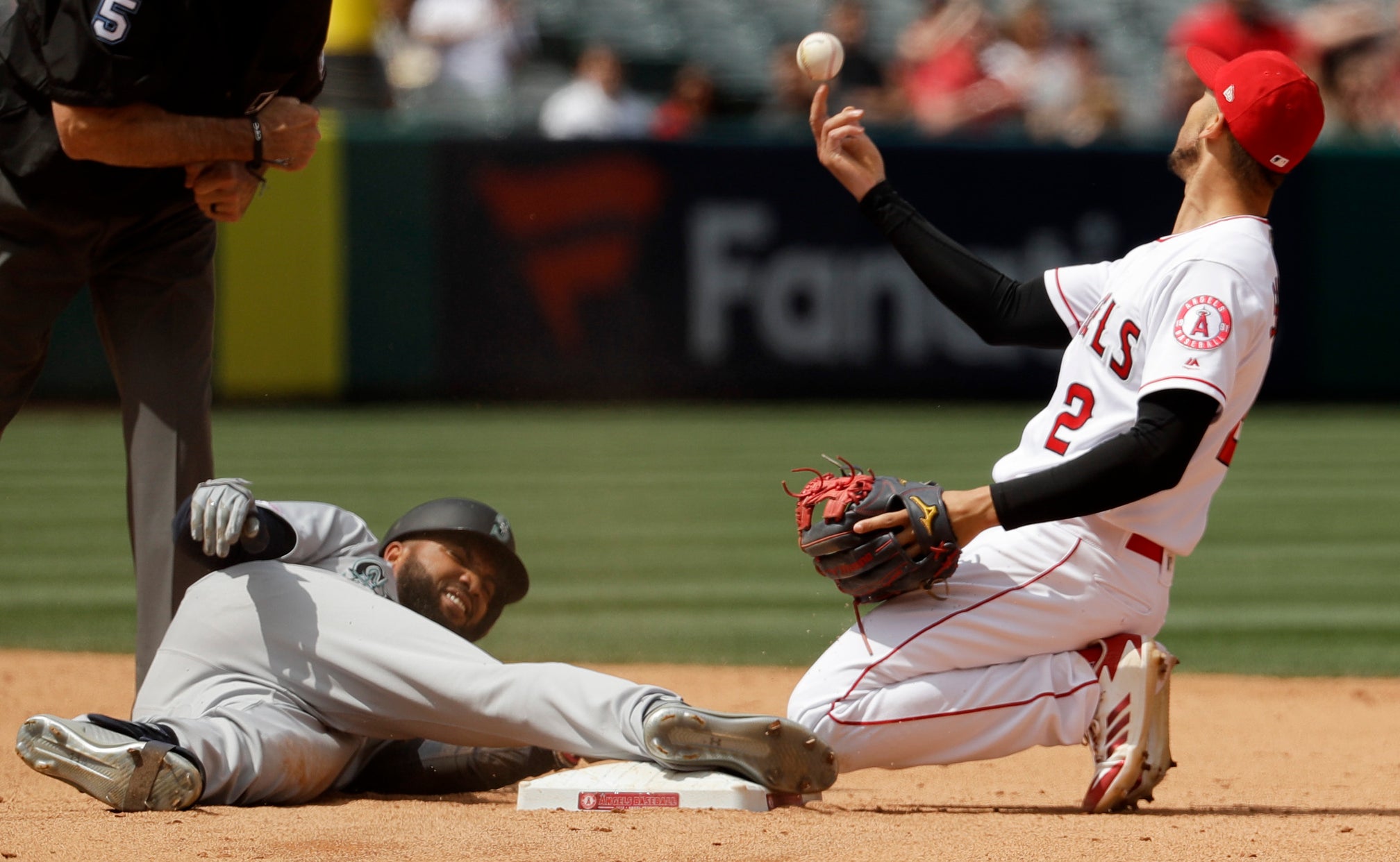 ANAHEIM, Calif. (AP) — The Los Angeles Angels found themselves on the wrong side of three close losses to open their four-game series against the Seattle Mariners.

The Angels were able to turn the tables in the finale on Sunday, but not without a bit of trepidation late.

Tommy La Stella hit two home runs and the Angels held on for an 8-6 win over the Mariners on Sunday to end a six-game losing streak.

The Angels led 8-1 going into the ninth inning before Tom Murphy cracked a two-run homer with one out off Noe Ramirez, and Dee Gordon immediately followed it up with a solo home run to right. Cody Allen gave up a two-run homer with two outs to Mitch Haniger to pull within 8-6 before walking Domingo Santana to bring Edwin Encarnacion up as the potential tying run.

Luis Garcia came in and got Encarnacion to pop up to Justin Bour at first to end the game, picking up his first save of the season.

"They are going to put together good at-bats and they are going to score their runs, and they did in the ninth inning, but we were able to hold them off so we'll take it," La Stella said after handing Seattle their second loss in 13 road games to start the season.

Kevan Smith and Brian Goodwin also homered and Mike Trout hit two doubles for the Angels, who avoided a sixth-straight loss to the Mariners. Jaime Barria (2-1) gave up one run in five innings.

Mike Leake (2-2) gave up four runs on three homers in six innings, with Smith putting the Angels up 2-0 in the second on a two-run shot just past the glove of a leaping Mallex Smith and over the wall in the deepest part of center field. La Stella got the first of two solo homers in the fourth for a 3-1 lead, and Goodwin made it 4-1 in the sixth with another solo home run.

Bour and Andrelton Simmons each drove in a run in the bottom of the seventh to make it 6-1. Calhoun doubled to score another run in the eighth for an 8-1 lead following La Stella's second blast, his sixth of the season to set a new career-high.

Mariners manager Scott Servais thought Leake pitched well enough for the Mariners to win, but blamed those late "tack-on runs" for giving their offense too big a margin to overcome.

"Everybody believes in our offense," Servais said. "If we can keep them right there, we always got a chance to come back, and you saw that in the game today."

La Stella needed 73 games in 2017 with the Chicago Cubs to record his previous career-best five homers. He's got six in 21 games this season, which La Stella credits to mental adjustments and the benefits of regular playing time.

"I think for me it's just kind of swinging a little bit easier, not necessarily trying to muscle through the swing," La Stella said. "I don't have to put such an aggressive swing on it. Just put the barrel on the ball and let the ball do the rest."

Hansel Robles threw a scoreless first inning before being replaced by Barria as the Angels became the latest team to employ an "opener." Manager Brad Ausmus considered giving a reliever a start earlier this month against the Cubs, but those plans were scuttled because of bullpen usage.

"Hansel did exactly what we hoped, got the top of the order out and allowed Jaime to start in the middle of the order as opposed to the top and then go through a couple of times, and we went from there," Ausmus said.

Ausmus expects to continue using relievers as spot-starters, a trend that started last season when Tampa Bay sent closer Sergio Romo out in the first inning of consecutive games against the Angels in May.

Trout hit multiple doubles in the same game for the 24th time in his career. Trout also had an outfield assist for his throw to Simmons in the sixth inning when Santana tried to stretch out for a double.

Mariners: OF Jay Bruce did not start because of a sore quadricep but drew a walk as a pinch-hitter in the seventh. . RHP Chasen Bradford (shoulder) threw a bullpen session Sunday and could be activated off the injured list to play in the two-game series against San Diego.

Angels: 1B Albert Pujols got the day off to rest. . LHP Tyler Skaggs (ankle) will throw one more bullpen session before being activated off the injured list. . Ausmus threw batting practice to DH Shohei Ohtani (elbow) on Saturday, but there is no updated timetable for the Japanese two-way star. "We've been pretty steadfast on sticking to his schedule and being cautious with him to avoid any long-term damage to his elbow," Ausmus said..

Mariners: RHP Erik Swanson (0-1, 3.38 ERA) will make his first career road start at San Diego on Tuesday. Swanson took the loss against Cleveland on Wednesday after giving up one run in six innings.

Angels: RHP Matt Harvey (0-2, 9.64) will start against the New York Yankees on Monday in the opener of a four-game series. Harvey is 1-0 with a 1.25 ERA in three career starts against the Yankees.