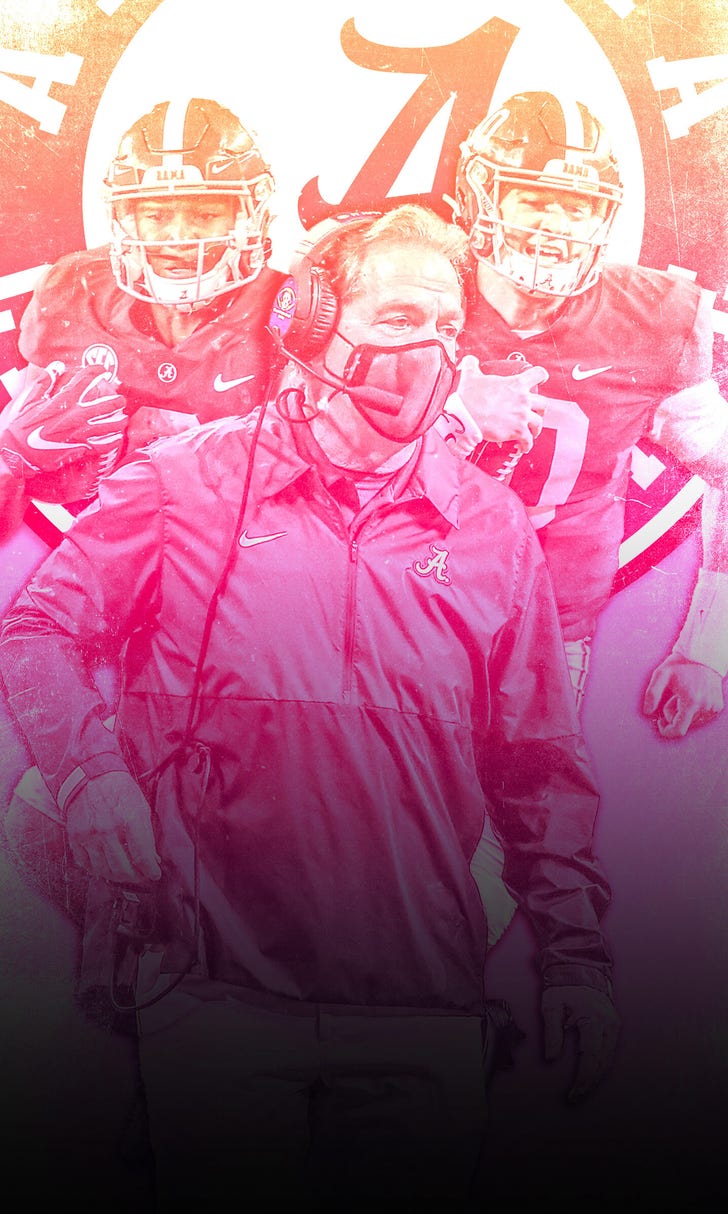 The Evolution Of Nick Saban

As if Nick Saban needed another edge in recruiting, the Heisman voters fully affirmed that Alabama is now an offensive powerhouse.

For the first time since 1946, three players on the same team finished among the top five spots in voting for the Heisman Memorial Trophy.

With that history made, Crimson Tide quarterback Mac Jones, wide receiver DeVonta Smith and running back Najee Harris serve to demonstrate how dramatically Saban has changed his philosophy toward offensive football in just eight years, regardless of how much he fought the change. 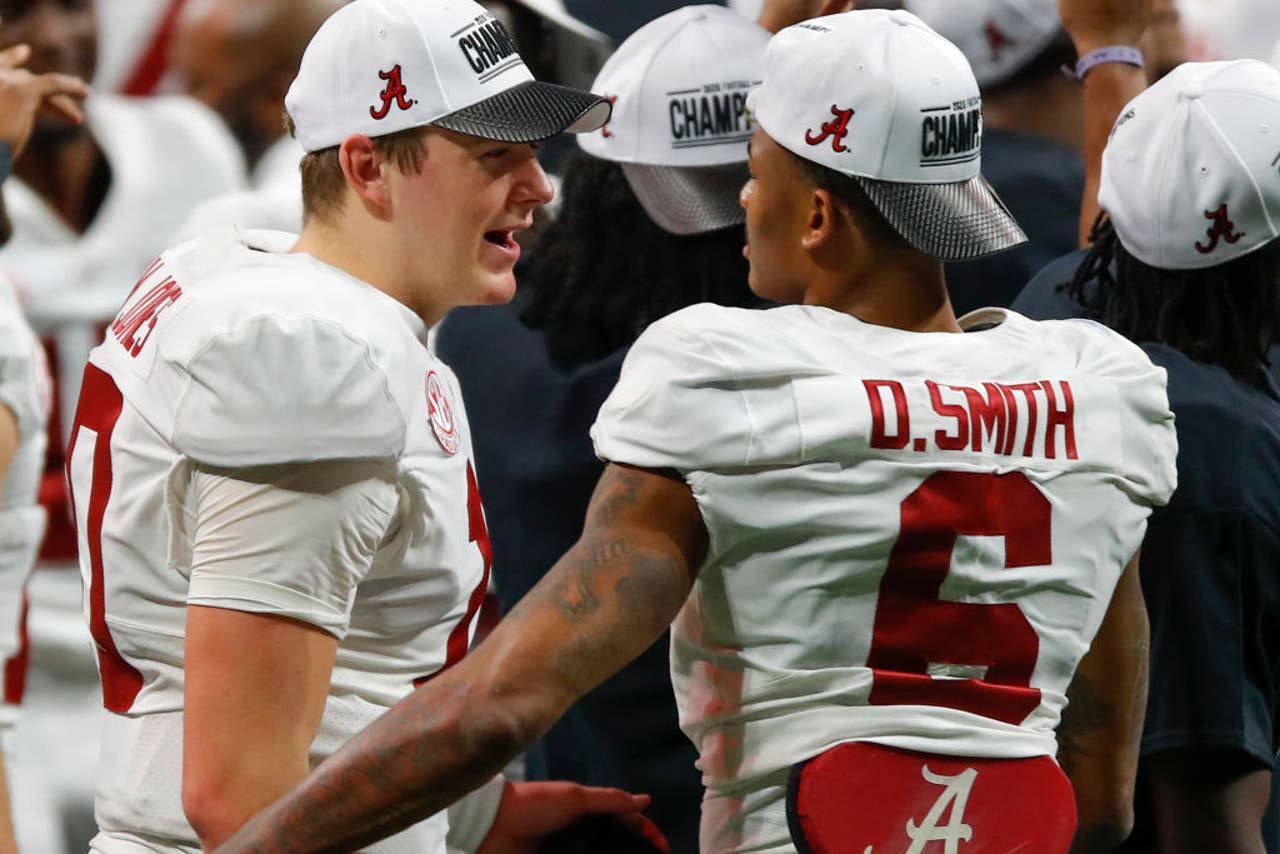 It won't be a surprise if Alabama quarterback Mac Jones, left, and receiver DeVonta Smith become the first teammates to finish 1-2 in the Heisman voting since 1945.

Harris might’ve won the Heisman in another season, let alone in a pandemic, with his impressive numbers. He’s having a career year with 1,262 rushing yards, averaging 5.9 yards per carry, and 27 total touchdowns.

If Jones and Smith finish first and second in the voting when the trophy is awarded Jan. 5, they’ll be the first teammates since Glenn Davis and Doc Blanchard to do so — the Army backfield mates accomplished the feat in 1945. And there’s every reason to believe Jones and Smith will do so as two of the best players on the consensus No. 1 team in America.

Smith leads the country in receiving with 98 catches for 1,511 yards and 17 TDs, propelling No. 1 Alabama to a national semifinal date with No. 4 Notre Dame on New Year’s Day in the Rose Bowl at AT&T Stadium.

Jones has emerged as one of the best quarterbacks in the country just a year after becoming the Tide's starting quarterback. He has passed for 3,739 yards with 32 TDs against just four picks, and he’s not the best player on his team. 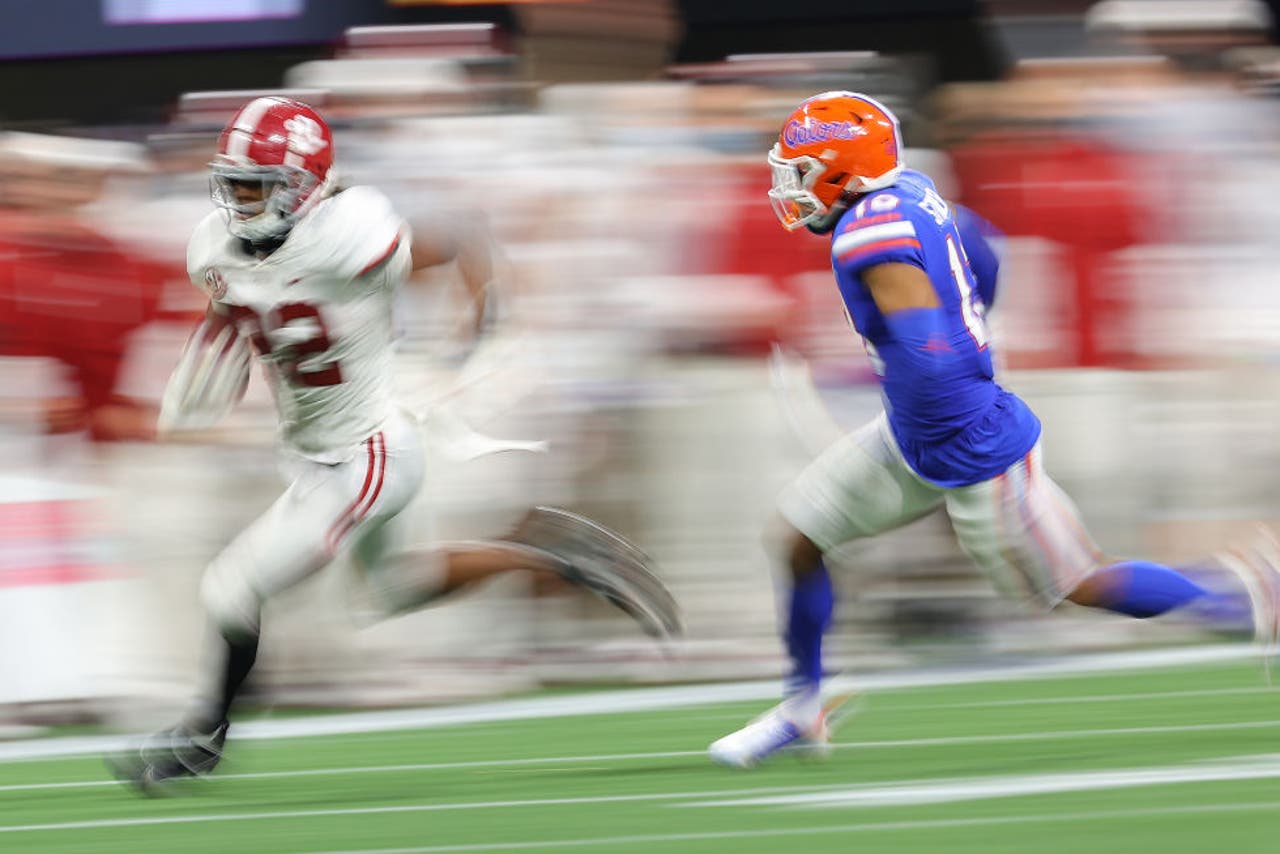 Najee Harris and the Tide are playing at a speed that no opposing defense has been able to slow down in 2020.

That’s Tide receiver Jaylen Waddle, who has missed most of the season due to injury, but was performing at Heisman level prior to getting hurt.

That serves to further underscore what Saban said has changed about his team’s offensive philosophy since the Tide last rolled Notre Dame 42-14 in the 2012 national championship game.

"How we play on the field, we’ve probably changed as the game has changed (to) play a little different style on offense," Saban said.

What a glorious understatement.

The watershed moment for Saban’s adaptation to bringing the Air Raid, Fun ‘N’ Gun, spread offense and run-pass option concepts to Tuscaloosa can be traced not to starting quarterback Jalen Hurts in 2016 or even promoting Lane Kiffin to offensive coordinator in 2014.

That moment came Nov. 12, 2012 — just two months before winning a third national title in four years — when Johnny Manziel led Texas A&M to a 29-24 upset win against Saban’s No. 1-ranked Alabama in Tuscaloosa. Manziel rode that performance to becoming the first freshman to win the Heisman in history. 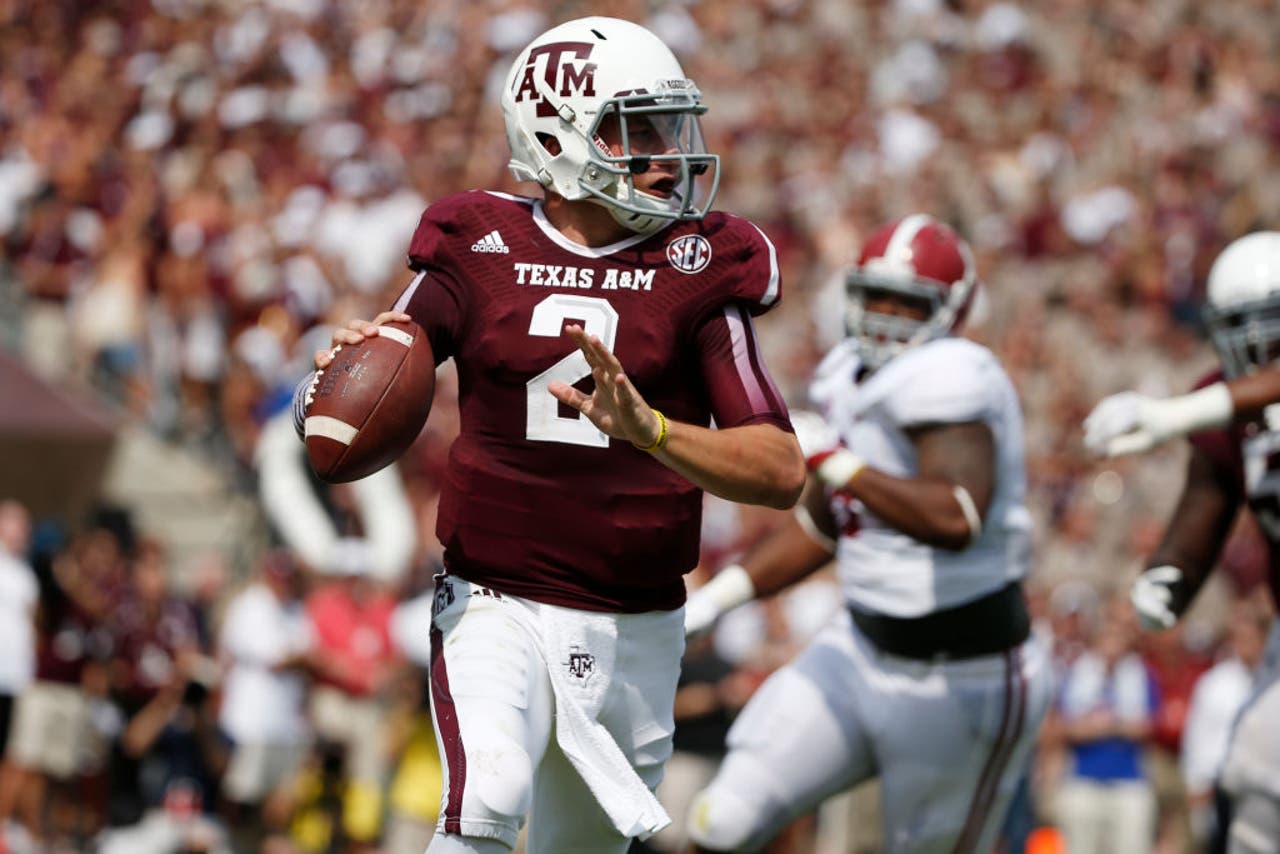 Johnny Manziel and Texas A&M opened Saban's eyes to the power of the spread offense.

It mattered that Air Raid disciples Kevin Sumlin and Kliff Kingsbury had pulled that upset by using an undersized firecracker quarterback in a pyrotechnic scheme designed to run up the score. And they had beaten the man who had become one of the game’s greatest coaches by recruiting the best players in country and coaching them to execute the most mundane offense in the sport without error.

A month before the A&M loss, Saban had lamented what the game was becoming with the proliferation of no-huddle, fast-paced offenses who took no time to move the ball, no substitutions between plays and no mercy on defenses.

The offensive idea was simple: Once you find a defense in a scheme you can take advantage of, keep going after that weakness and don’t give it a chance to change personnel. It’s the guiding principle Kiffin used earlier this season with Ole Miss to score 48 points and put up 647 yards of offense on Saban’s defense.

In 2012, Saban, the last great bastion of the three-yards-and-a-cloud-of-dust offense, argued the spread was making the game unsafe and rued it in a teleconference with a monologue.

"It’s obviously created a tremendous advantage for the offense when teams are scoring 70 points and we're averaging 49.5 points a game," he said. "With people that do those kinds of things. More and more people are going to do it. I just think there's got to be some sense of fairness in terms of asking is this what we want football to be?" 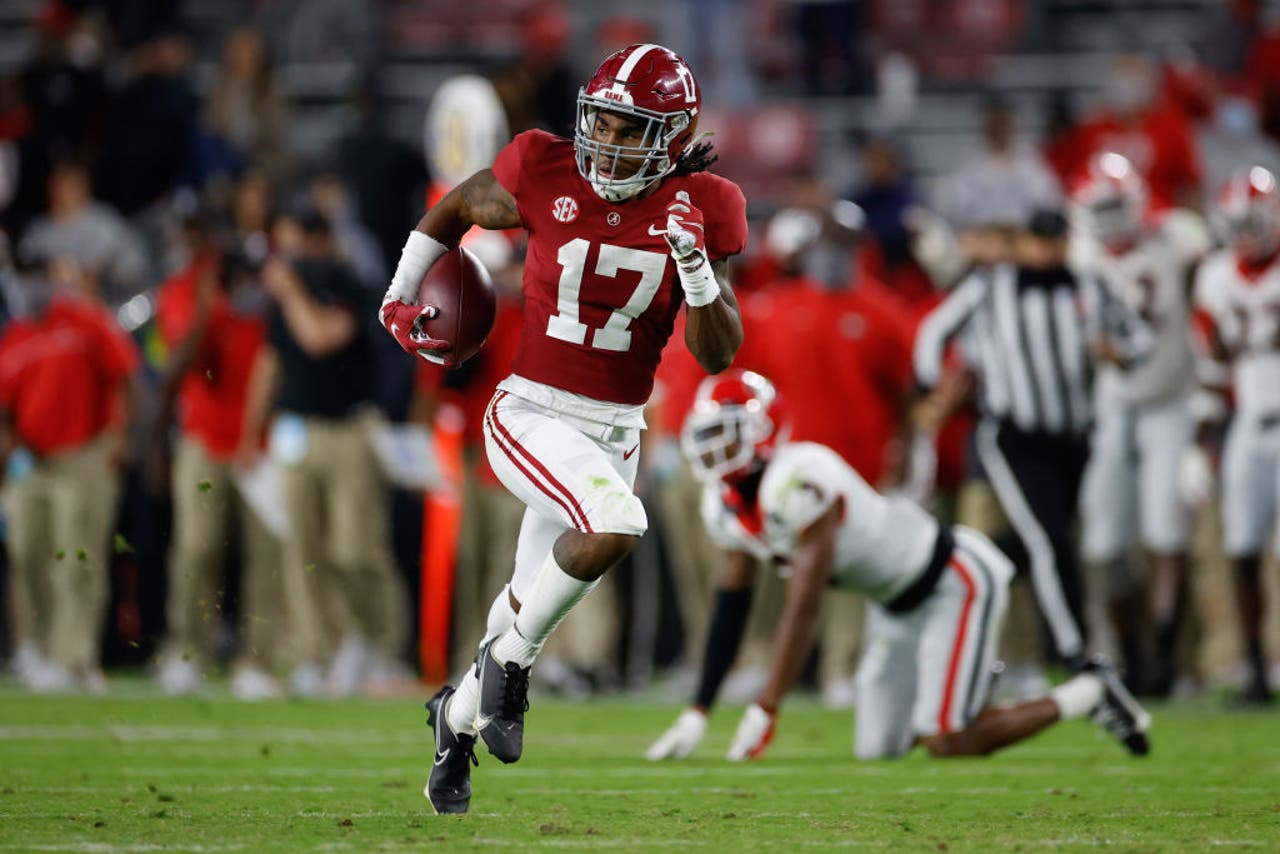 If he had not been injured in a late October game at Tennessee, Jaylen Waddle might also be among the 2020 Heisman finalists.

Eight years later, Saban could be talking about his own offense. Alabama ranks second nationally in scoring with 49.7 points per game, scored 63 against Ole Miss and at least 38 in every game this season and ranks No. 1 in yards per play at 7.7 (among teams who played 10 games or more).

Only Oklahoma has averaged more yards per play in a season over the last five years. This while Alabama ranked 46th in yards per play just four years ago and has finished among the top three in that stat in each of the last two years.

"Is this what we want football to be?" is no longer an interrogative sentence we ask. This is what football is — declarative, definite and staying in power.