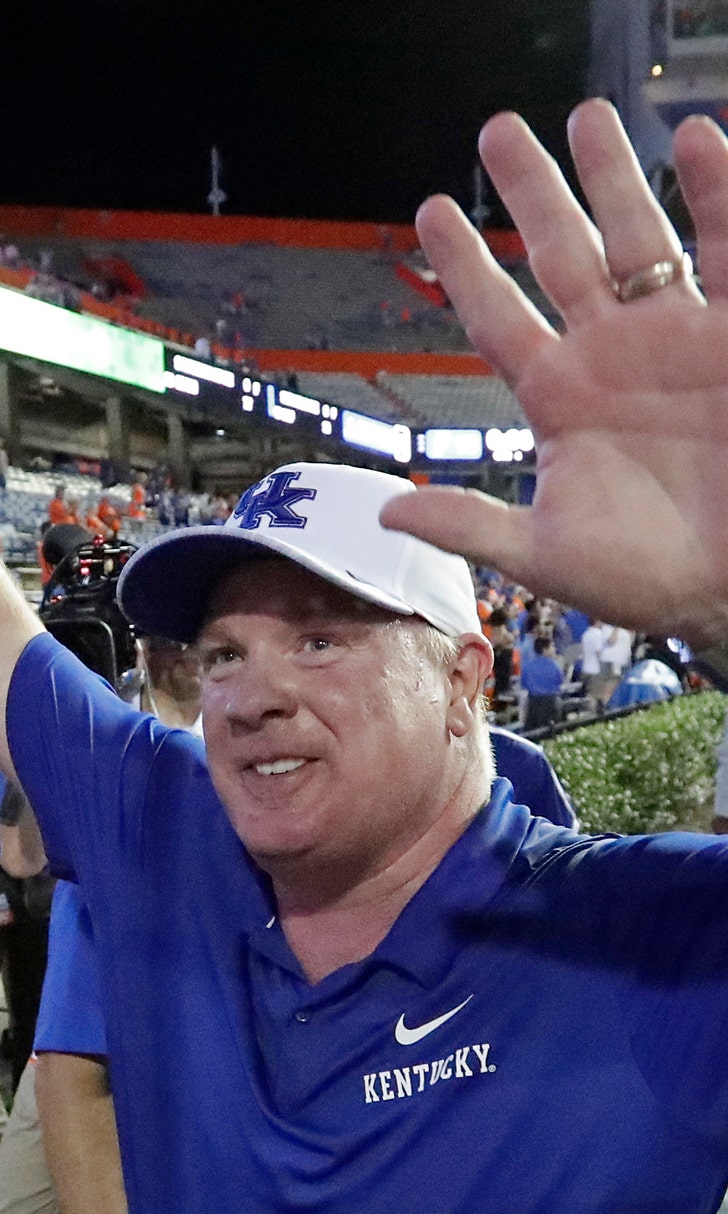 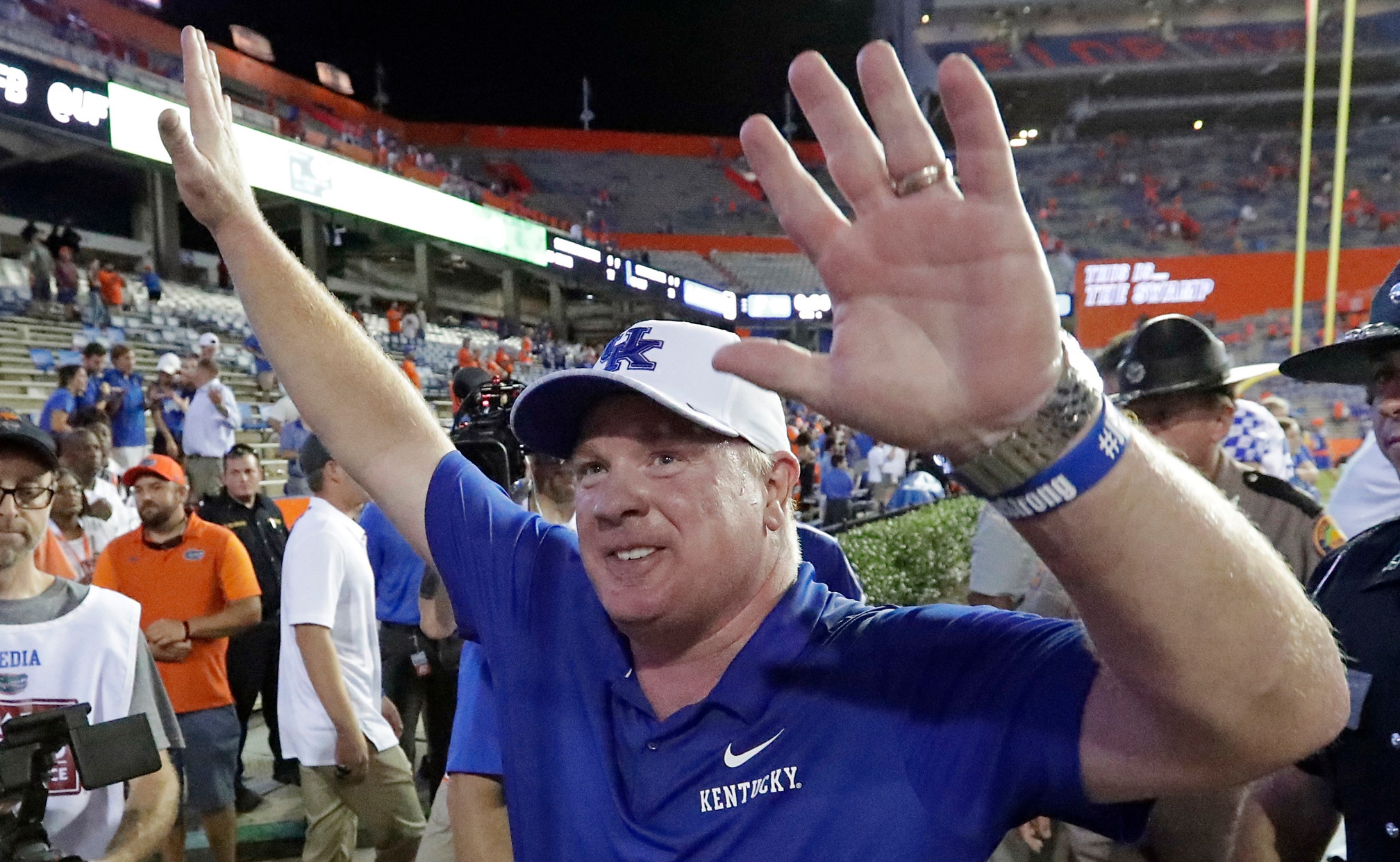 Kentucky looks to continue momentum against Toledo in opener

LEXINGTON, Ky. (AP) — The Kentucky Wildcats' most successful season in a generation has made them an even bigger target for opponents — especially nonconference foes eager to topple a Power Five program.

The Wildcats learned a hard lesson in 2016 when they lost their opener against Southern Mississippi. Last year's 10-3 finish and Citrus Bowl victory were indications of just how far the Wildcats have come since then and they're eager to maintain that momentum in Saturday's inaugural meeting against a Toledo squad also coming off a postseason appearance.

"It's a great chance early on and we'll see where we're at," Kentucky linebacker Jamar "Boogie" Watson said this week. "They're expected to win the MAC West, so it's a great opponent off the bat. We'll see what we've got."

Kentucky will look different on both sides of the ball without Benny Snell and Josh Allen, career leaders respectively in rushing and sacks.

Offensively, the Wildcats want to pass more behind second-year starter Terry Wilson. Defensively, they're hoping Watson can present the same pass rush threat as Allen and that former backups can replace key departures in the secondary.

Most importantly, Kentucky desires to pick up where it left off from that 27-24 bowl win over Penn State on New Year's Day.

"I think you have an idea of who you are, what your team's going to look like," coach Mark Stoops said. "There's definitely a few more emotions with the first game because you really just want to get out there and play and see exactly what you have."

Mid-American Conference member Toledo is just as curious as it seeks to beat its first Southeastern Conference school since upsetting No. 18 Arkansas 16-12 in 2015.

The Rockets are deep in many phases with 13 starters back from a 7-6 team that reached the Bahamas Bowl last season. Six starters return to a high-octane offense that ranked ninth in scoring (40.4 points) and 30th in per-game yardage (443.8).

Fourth-year coach Jason Candle is also eager to see how his defense has matured, especially against a Wildcats squad he said presents a big test.

Some other things to watch as Kentucky meets Toledo for the first time:

Wilson has a deep receivers group and eager running backs to work with in his second season behind center. He passed for 1,889 yards and 11 touchdowns as a sophomore, but this season's objectives are more shorter routes and better decision making after Wilson tossed eight interceptions.

Toledo running back Bryant Koback began his college career at Kentucky in 2017 but was redshirted as Snell emerged as the Wildcats' top ball carrier. The Holland, Ohio, native transferred and has thrived with the Rockets. Koback returns as their top rusher with 917 yards and 14 TDs last season, which ranked fifth in the MAC. He's on the watch list for the Doak Walker Award given to the nation's top back.

Wildcats strong safety Jordan Griffin is the only senior in a group that will be significantly younger after replacing all four starters. The two-deep depth chart lists sophomore Cedrick Dort Jr. and redshirt freshman Jamari Brown as the starting cornerbacks with sophomore Yusuf Corker at free safety. Griffin had 13 tackles and three pass breakups while starting four contests as a junior.

Toledo is 83-37 this decade and one of just nine FBS schools with winning records each of the past nine seasons. Candle has played a big role in this run as an assistant from 2009-15 before going 28-13 as coach.

Alabama Steamrolls Auburn In Iron Bowl
The Crimson Tide were in national title form despite Nick Saban's first career absence, as the offense couldn't be stopped.
7 hours ago

An Eight-Pack of TDs For One RB
Eight scores. 409 rushing yards. Buffalo's Jaret Patterson was out to make a record-setting statement on Saturday.
9 hours ago

Is OSU's Season in Jeopardy?
A COVID-19 outbreak in Columbus could spell trouble for the Buckeyes' season. The Big Noon Kickoff crew breaks it down.
16 hours ago
those were the latest stories
Want to see more?
View All Stories
Fox Sports™ and © 2020 Fox Media LLC and Fox Sports Interactive Media, LLC. All rights reserved. Use of this website (including any and all parts and components) constitutes your acceptance of these Terms of Use and Updated Privacy Policy. Advertising Choices. Do Not Sell my Personal Info