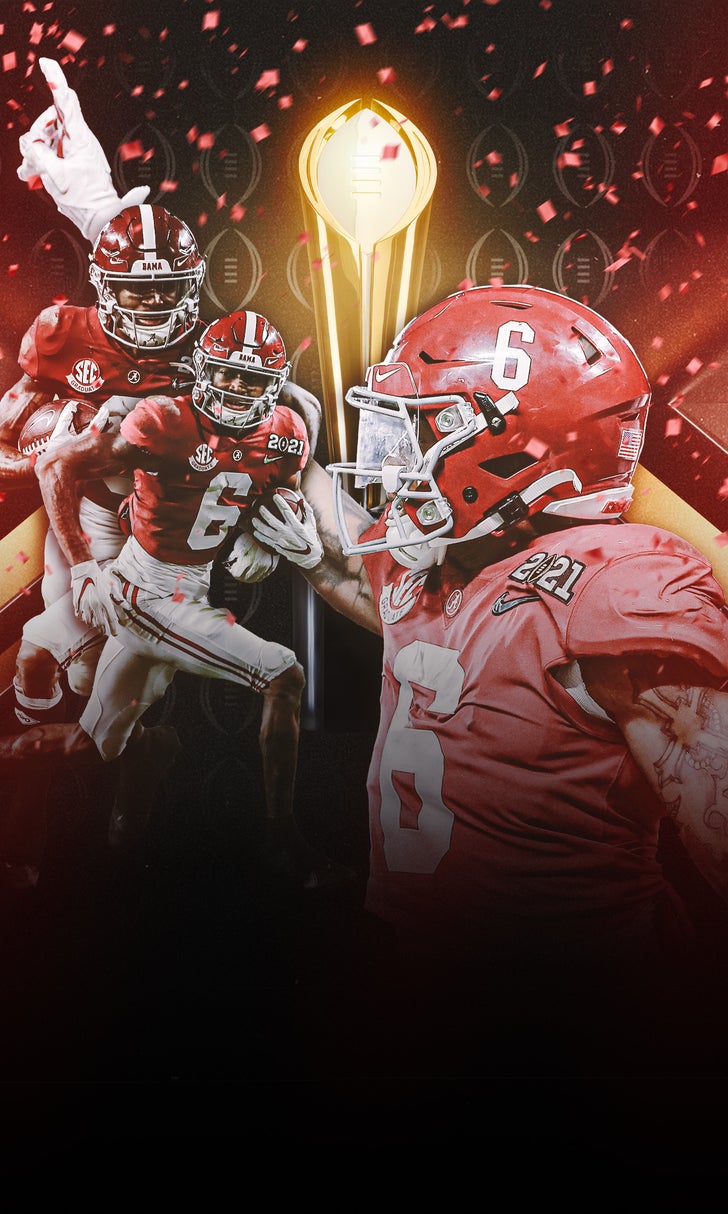 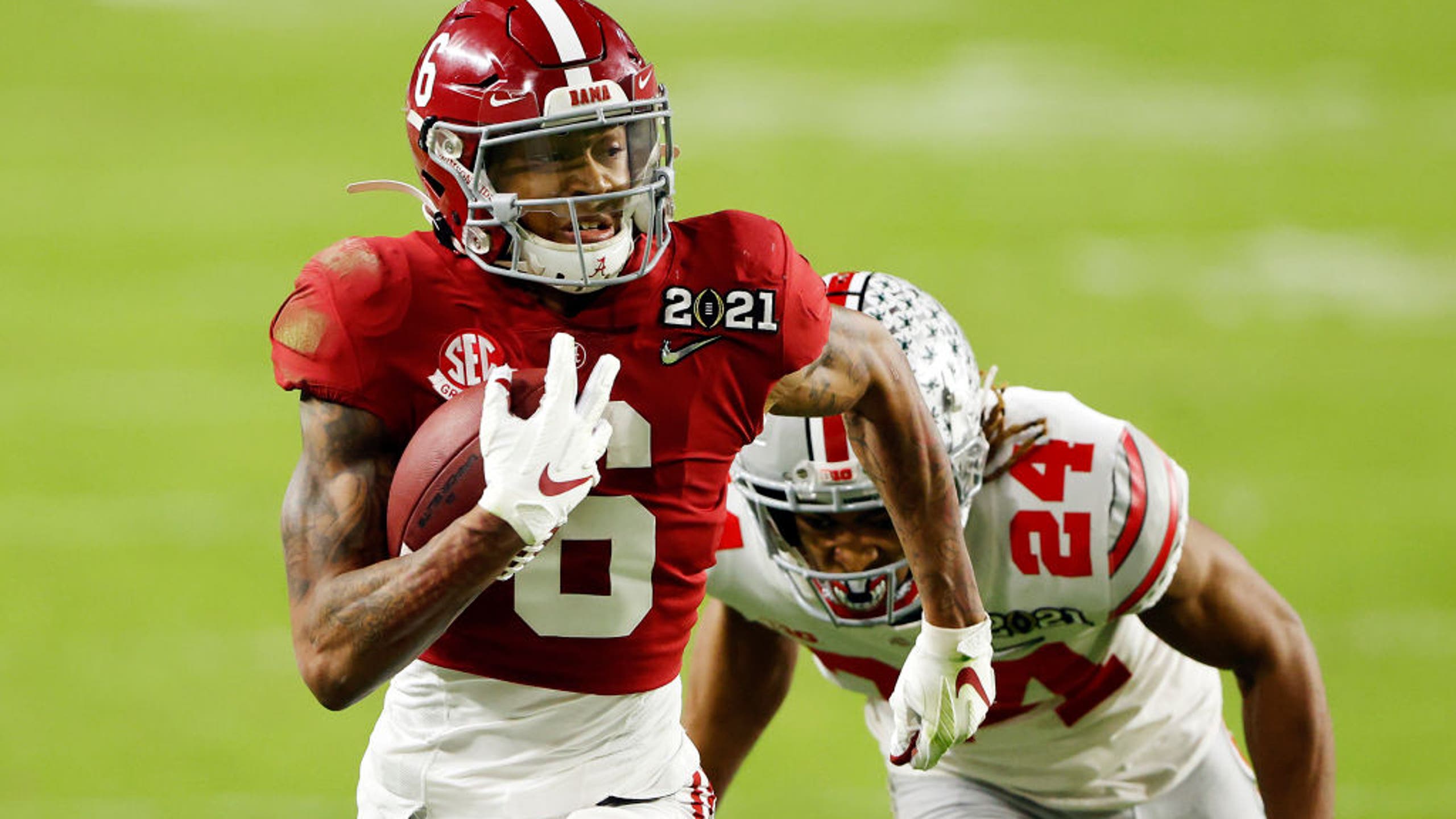 The season was in doubt right up until the first kickoff of the first game. But Alabama didn’t flinch.

Not when Southeastern Conference COVID-19 protocols were enacted, forcing league members to play an all-SEC schedule.

Not when star receiver Jaylen Waddle suffered a fractured ankle against Tennessee in October.

Not when Saban tested positive for COVID-19 in November, or when offensive coordinator Steve Sarkisian accepted the Texas job last week.

And certainly not after finishing the season 13-0 and with a claim as one of the greatest teams of the College Football Playoff Era.

At the center of it all? The sport’s best player and Alabama wide receiver DeVonta Smith, who simply dominated the first half of the Tide's 52-24 rout of Ohio State on Monday night.

By the start of the second quarter, quarterback Mac Jones had completed a casual 11 of 13 pass attempts for 122 yards. But Smith had accounted for five of those 11 completions and 78 of those 122 yards.

He had run wide open and uncovered once for a catch in the first quarter. He got to the corner on a receiver screen on another.

Then Sarkisian managed to scheme up yet another play that got the 2020 Heisman winner free for his first touchdown of the game, and that was the moment everyone watching knew that the third-ranked Buckeyes did not have an answer for the man nicknamed the Slim Reaper.

But that doesn’t make Ohio State any different than No. 7 Florida in the SEC Championship Game or No. 4 Notre Dame in the Rose Bowl. Smith went for 22 catches, 314 receiving yards and five TDs against those Top 10 opponents, and every Buckeyes fan knew he was the largest threat to OSU’s quest to win a ninth national title. 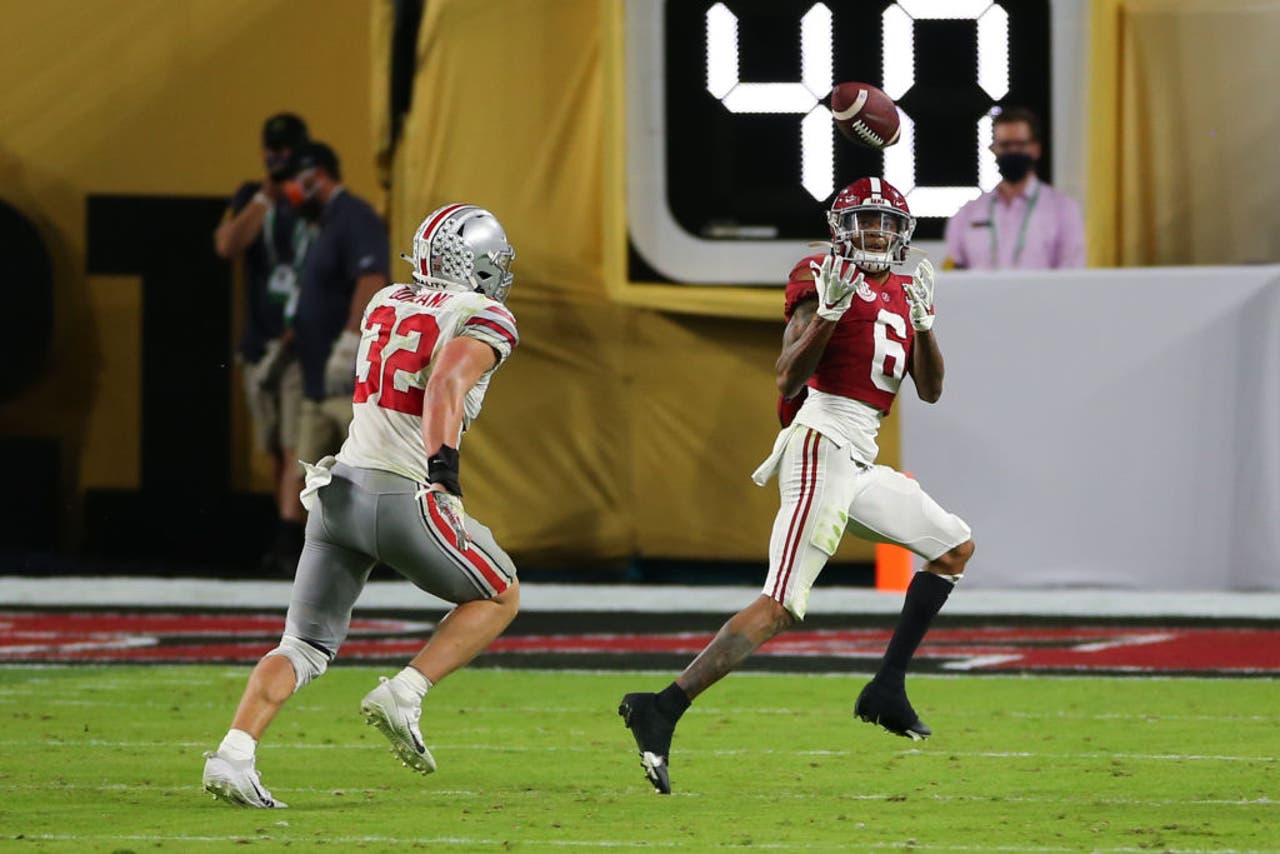 The sight of DeVonta Smith running away from the defense was a common one as Alabama rolled to the 18th national title in school history.

Ohio State was also missing one of its key offensive weapons in running back Trey Sermon, who was sidelined on the first series of the game. After starting the night as the hottest running back in the sport with 524 yards on the ground in his last two outings, Sermon was taken to the hospital with an apparent shoulder injury.

The Buckeyes were down a star player and facing an offensive juggernaut.

With Ohio State hanging tight at 21-17 late in the second quarter, it felt like an offensive surge was coming from the Tide. That surge came in the form of one man as Smith scored two touchdowns in the final 3:28 of the half to turn a four-point game into a comfortable 35-17 halftime lead and a rout in the making.

First, Sarkisian got Smith into space again as he scored on a 5-yard TD catch, finishing it with a sprint inside the right pylon.

Then Smith got behind everyone -- somehow the most dangerous man on the field was running free from a linebacker -- for a 42-yard TD catch.

When the teams hit the break, Smith had amassed 12 catches for 215 yards and three TDs, and only one question remained: Where does Smith's performance land in the CFP era?

Former LSU wideout Justin Jefferson put on a similar performance in the Peach Bowl against Oklahoma last season when he went for nine catches and 186 yards with four touchdowns in the first half.

In the 2020 national title tilt, former Biletnikoff winner Ja’Marr Chase lit up Clemson for 221 yards and two touchdowns on nine catches. He was stupendous, yet Smith was not only better, but he also put on the best performance by a receiver in a national title game – in a single half.

As Saban said postgame, "Heaven knows what he would have done if had played the whole game."

Heading into this title game, Ohio State cornerback Shaun Wade said he wanted to match up with the man who absolutely gave him the business Monday in Miami.

"You already know who I want to go up against at the end of the day?" Wade said during the week.

Smith decided not just to give Wade what he wanted but also to give a legendary performance.

He secured the offensive MVP award, but he still refused to make this night about himself and chose to make it about his team.

"Well, we had a mission," Smith said. "Everybody wanted to end things the right way. We just all came to work every day and just put in the work. We got the result that we wanted."

Smith needed just six yards to break the record for receiving yards in a national title game. However, his virtuoso performance was cut short midway through the third quarter due to a dislocated finger, but his mark on the game is the one that will last forever.

"He’s a great competitor," Saban said. "I heard somebody say he set some kind of record in the first half of the game. ... 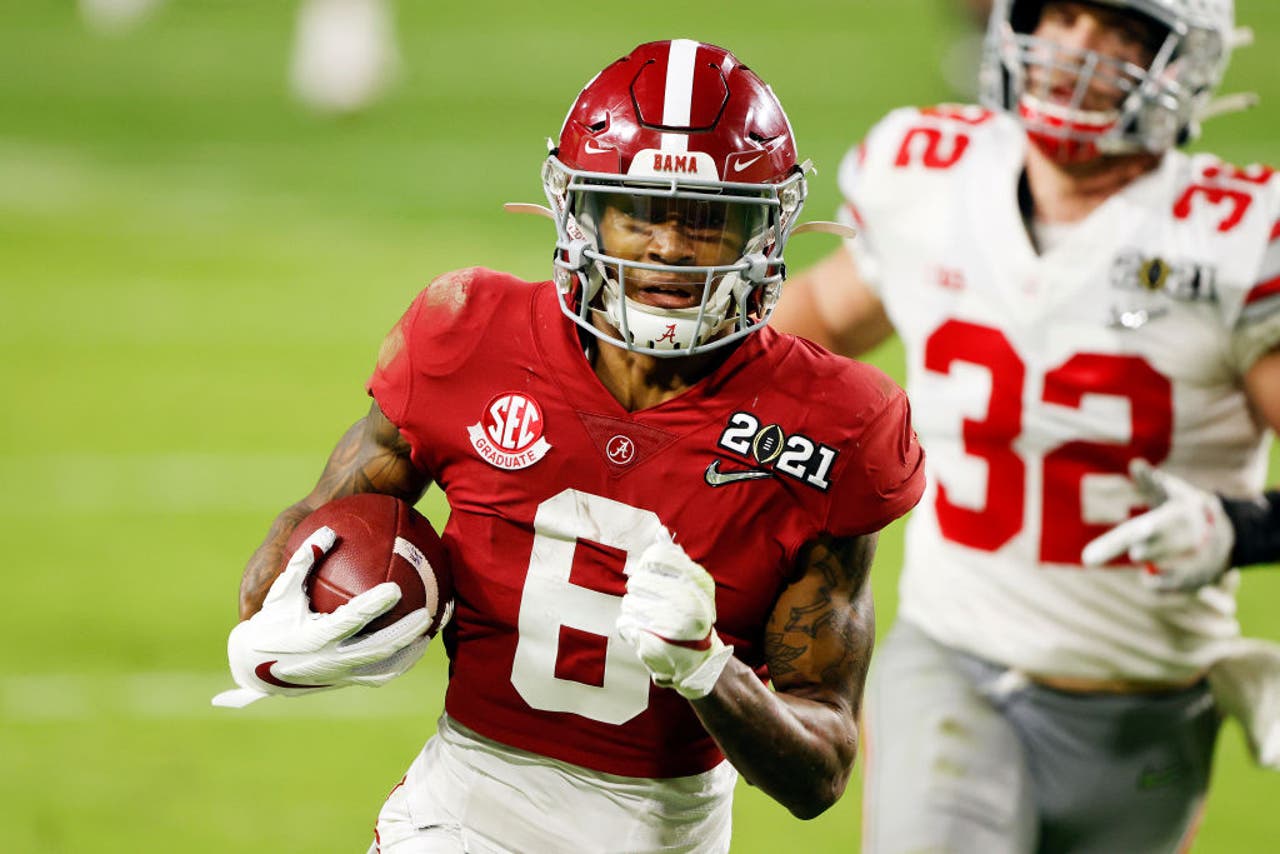 The Heisman Trophy winner proved to be unstoppable, amassing 12 catches for 215 yards and three touchdowns in the first half alone.

"But you’re talking about the ultimate warrior, ultimate competitor. I’m so happy for him that he was recognized as the best player in college football because I don’t think anybody's done more for their team than he has for our team."

Jones’ performance speaks to the elegance and excellence of Saban’s in recruiting and development. The Tide quarterback was an afterthought to the 2017 class, joining a group led by a veritable who’s who of college football’s best from Tua Tagovailoa to Jerry Jeudy to Henry Ruggs to Smith to Najee Harris.

"Well, a lot of good players," Saban said, "five that would be here that aren't, and we won for them, too, because we appreciate what they did for the program. But this senior class provided great leadership for this team as well as great performance."

Heisman winner and 2020 NFL No. 1 overall pick Joe Burrow passed for a record 463 yards in the 2019 Peach Bowl. Jones passed for 464 in the national title game. That’s what Alabama has become — a place where the bottom of the depth chart and the guy no one thought would get to play becomes one of the dominant players in the sport.

It was a fitting way for Saban to win his sixth national title at Alabama, the seventh of his career and No. 18 for the Tide.

When people talk about a dynasty, the conversation needs to begin with Saban at Alabama, where the Tide got to see the best player in the sport sit out the second half and enjoy the process of winning.

This is the ultimate team.