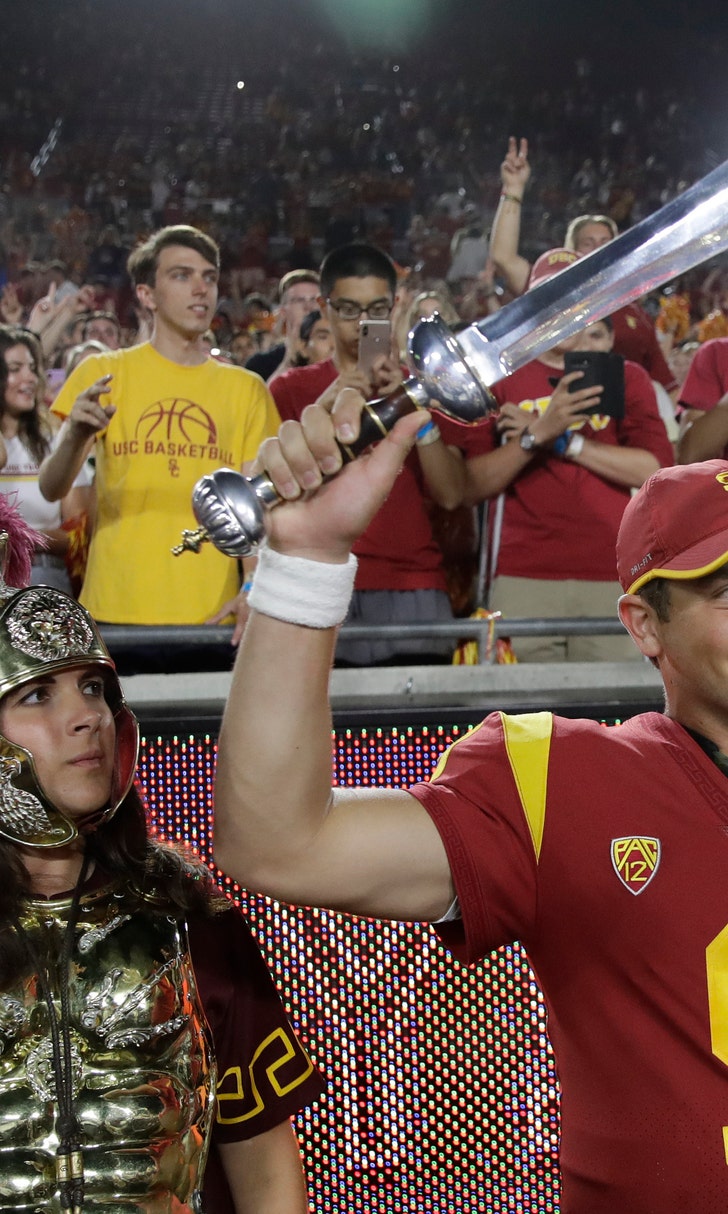 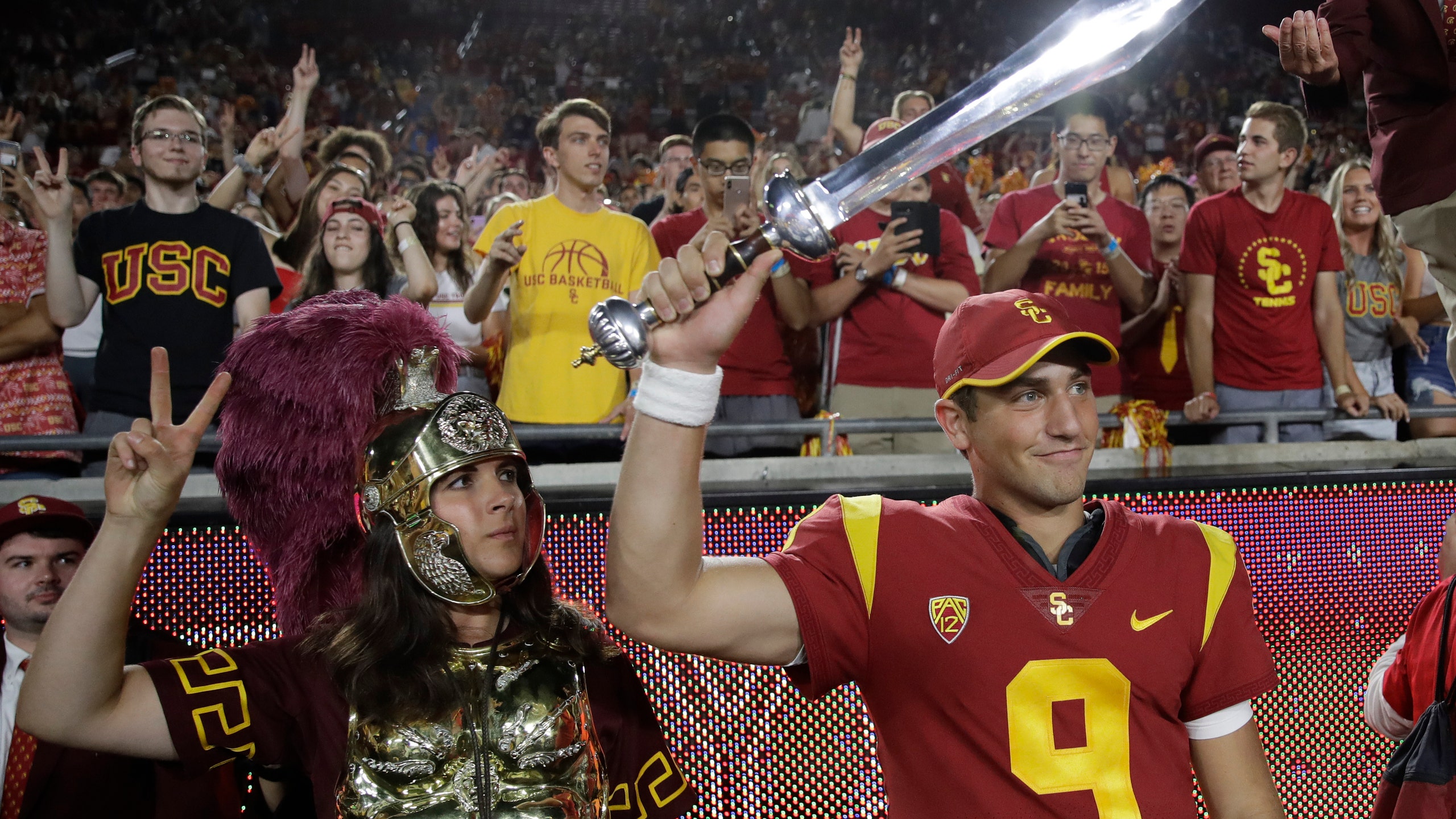 Around the Pac-12: Slovis a highlight among league newcomers

Freshman Kedon Slovis had fans at the Coliseum chanting "We love Slovis!" in the fourth quarter of his debut as USC's starting quarterback.

He's just one of several newcomers to make an early impact this season in the Pac-12. Fellow freshman quarterback Jayden Daniels has also shown promise for Arizona State, Oregon linebacker Mase Funa has collected a pair of sacks in his first season, and Colorado's Mel Tucker is 2-0 in his first gig as a head coach with a big win over Nebraska.

Slovis was the talk of the league following the Trojans' 45-20 victory over Stanford on Saturday after throwing for 377 yards and three touchdowns. He was pressed into service because of J.T. Daniels' season-ending knee injury in USC's opener.

"When we got out there he didn't really look rattled at all," said wide receiver Amon-Ra St. Brown, who caught eight of Slovis' passes for 97 yards and a pair of touchdowns. "He rallied us up after each drive and said, 'Let's go.'"

The victory pushed the Trojans into the rankings at No. 24 this week. They'll visit BYU on Saturday.

"I'll never forget him coming to camp. There were a bunch of supposed four- and five-star guys out there, and exactly what you saw tonight was what he did that day. No fear, was just poised, looking forward to the opportunity, couldn't wait to compete. He showed up," USC coach Clay Helton said, talking about his 18-year-old starter.

Slovis was a largely unheralded three-star recruit out of Desert Mountain High School in Arizona, where his position coach was former NFL star Kurt Warner.

He was surprisingly chill about his first college start, which earned him Pac-12 Player of the Week and Freshman of the Week honors. Asked if he expected to throw for that many yards, he simply said "probably not" and noted he never heard the crowd chanting his name.

"It was pretty good, but at the same time, how good is it with these guys?" he said. "Don't think it really shows how well I am, but it shows how good of a team we have around me."

Some of the others who have made strong Pac-12 debuts — and one anticipated player who is still waiting for his chance.

JAYDEN DANIELS, Arizona State: The freshman earned Pac-12 honors in the season's opening week after throwing for 284 yards and two touchdowns, while also rushing for a score, against Kent State. In a follow-up victory over Sacramento State last weekend, Daniels threw for 304 yards and a TD, a 72-yard pass to Eno Benjamin.

MEL TUCKER, Colorado: The first-time college head coach has victories over Colorado State and Nebraska. It was the statement-making 34-31 overtime win over the Huskers that announced a new era of Colorado football under Tucker, and afterward the fans swarmed the field.

"You could feel it from the moment we stepped onto the field until the very end when those fans rushed the field. It was just a great atmosphere for college football. I can't imagine it being better anywhere else," he said.

RICHARD NEWTON, Washington: A redshirt freshman who didn't see any playing time his first year, Newton made a splash by rushing for 91 yards on 12 carries and a touchdown in the season opener against Eastern Washington. He added nine carries for 42 yards in the loss last weekend to Cal and is ranked second on the team in rushing yards. "He's a hard, tough runner," coach Chris Petersen said.

Incidentally, 55 of No. 23 Washington's 106 players are freshmen or redshirt freshmen. Every freshman on last year's team preserved their redshirt season.

MASE FUNA, Oregon: The outside linebacker didn't play his senior year in high school because of injury, but now he's one of three freshmen nationally to have a pair of sacks in as many games. Both came for the No. 15 Ducks against Nevada last weekend.

"We always felt Mase was going to be one of the best linebackers in the country. You know he has a rugby background? You should see that guy run the ball. It's pretty special," Oregon coach Mario Cristobal said. "He's just a physical player, and he's heavy-handed, he's light-footed."

SPECIALISTS!: Arizona State. The Sun Devils have a pair of special teams newcomers who have stood out in the opening weeks of the season. Punter Michael Turk set the NCAA record for best average yards per punt (63 yards) in a game with a minimum of five attempts in the opener against Kent State. He punted five times for 315 total yards.

Last weekend against Sacramento State teammate Cristian Zendejas made all four of his field goal attempts, from 36, 26, 35 and 26 yards out, becoming the first Sun Devil to make four FGs in a game since 2016.

JUWAN JOHNSON, Oregon: The Ducks receiver, a graduate transfer from Penn State, was expected to start this season but missed the first two games because of what has been described as a "soft tissue" injury. Cristobal puts his chances of a debut for the Ducks this weekend against Montana at 50-50.