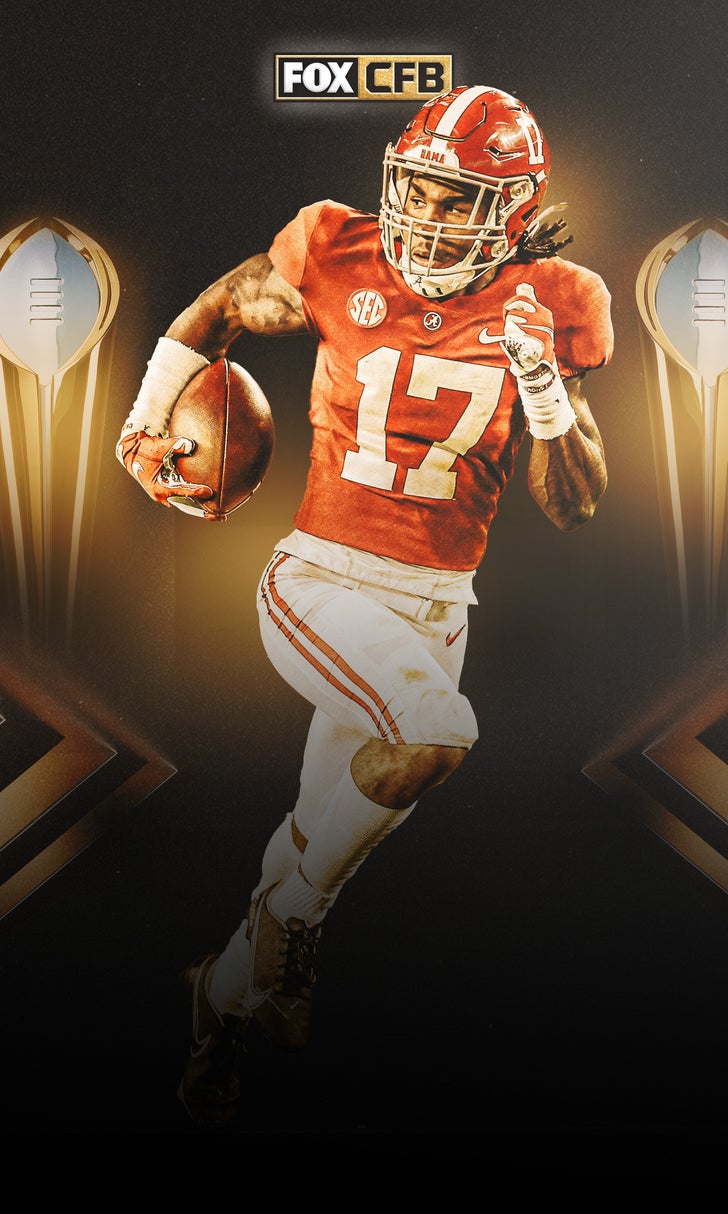 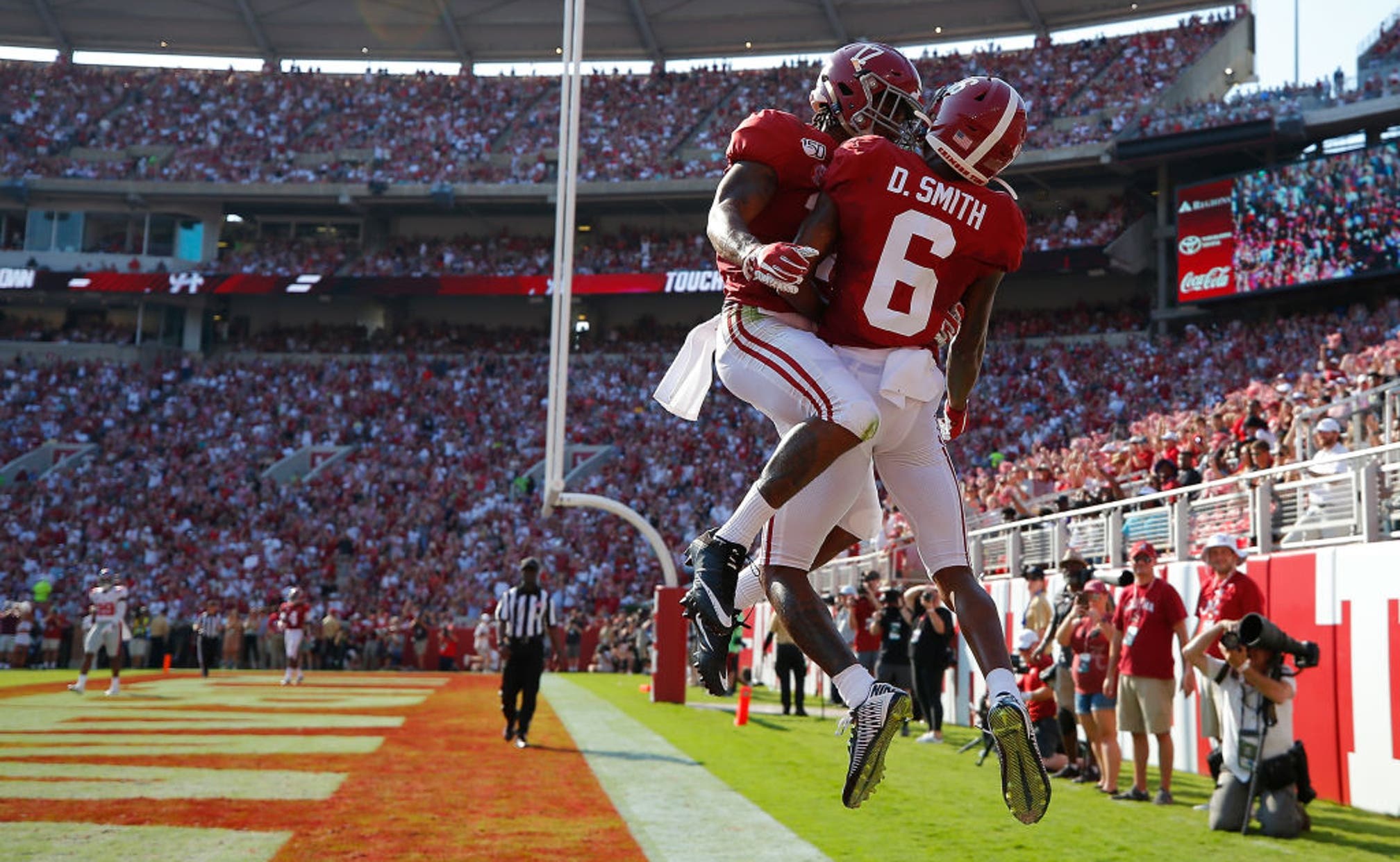 From Unstoppable To Unbelievable

Fresh off winning the Heisman Trophy, DeVonta Smith stepped to the podium and took just two questions about himself before he was asked to comment on the health of his teammate.

Never mind that the Alabama wide receiver had recorded nearly 100 catches and more than 1,500 receiving yards this season. Never mind that he had taken apart the secondaries of No. 7 Florida and No. 4 Notre Dame with a combined 22 catches for 314 yards and five TDs over two weeks.

Never mind that Smith is the man his teammates nicknamed the Slim Reaper (the moniker that Kevin Durant turned down). He’s the man who has become college football’s John Wick, wiping out entire secondaries despite his 175-pound frame.

It's scary for college football to think that Alabama's second-most explosive hitman has been the crowned best player in the sport in 2020.

And in an even scarier proposition for the College Football Playoff title game Monday night against Ohio State, the Tide could be rolling out a hitman tandem (Jules Winnfield and Vincent Vega, perhaps?).

Jaylen Waddle, the most explosive player in the game before his late October injury on the opening kickoff at Tennessee, is bidding to return. 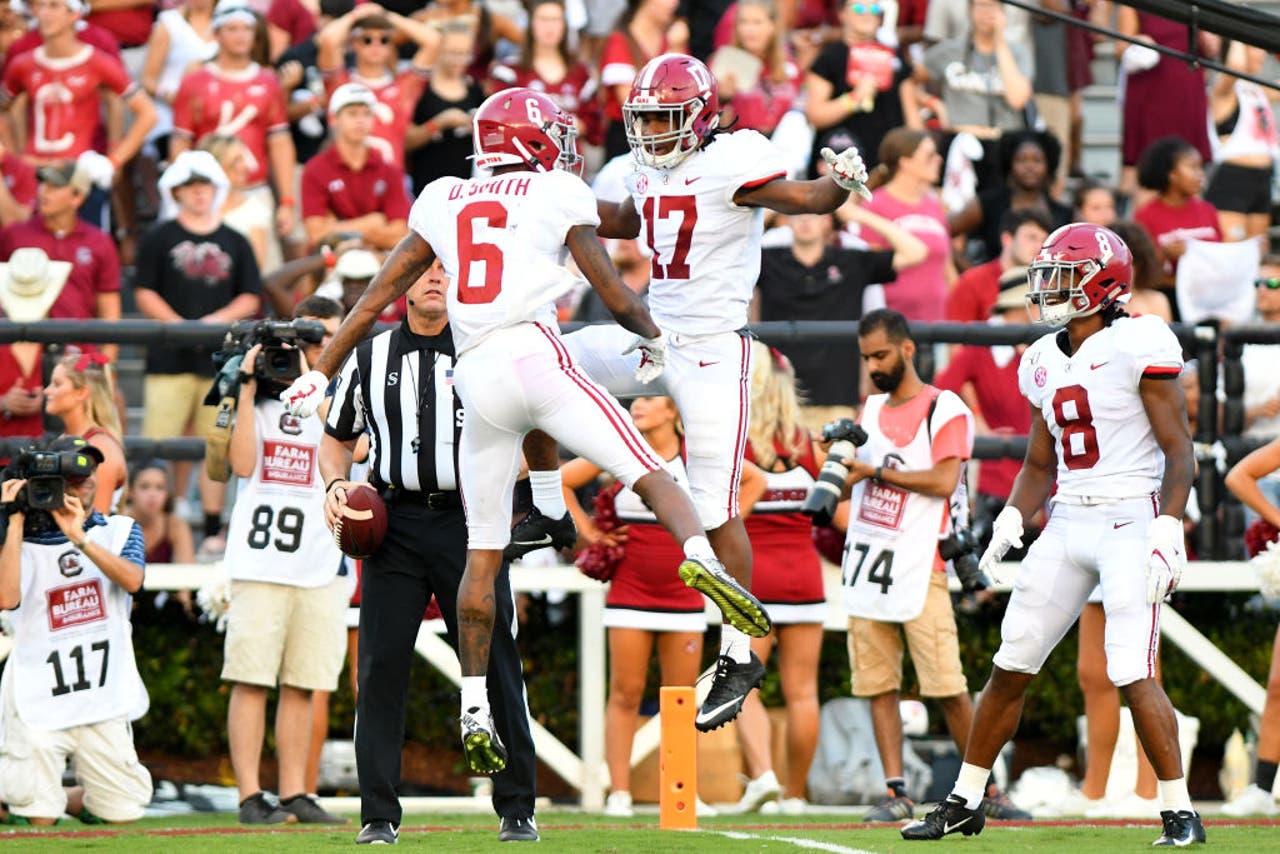 Alabama wide receiver DeVonta Smith, left, and Jaylen Waddle have spent a lot of time celebrating in the end zone.

At the time, Waddle's fractured ankle was believed to be a season-ending injury — but he returned to practice this week and could play Monday.

"It's amazing just to see him recover," Smith said. "I'm glad that he's recovering well and that everything is just going as planned."

Waddle practiced Tuesday, but did he look like himself?

"I think he's getting back into it," Smith said. "Of course, he's going to take some time just for him to get back comfortable with everything, but he looks good to me."

Do you think there's a shot of him playing?

The return of a player like Waddle in the national championship game could be an overwhelming prospect for an Ohio State defense that ranks 41st in the nation in yards allowed (373 per game).

As a true freshman in 2018, Waddle had 848 receiving yards on only 246 routes run, according to FOX Sports research. That is a yards-per-route run average of 3.44, which was fourth among all FBS receivers (with 200-plus routes) that season, and higher than Waddle’s teammate and 2018 Biletnikoff Award winner Jerry Jeudy, whose YPRR was 3.19.

In three years in Tuscaloosa, Waddle has averaged 15.3 yards per target and exactly 10 yards-after-the-catch. Given any amount of space with the ball in his hands, he can detonate a defense, which is one of the reasons Alabama coach Nick Saban asked him to return punts.

Waddle’s 2019 punt return average was 24.4 yards, which is the sixth-best mark in FBS history among players with at least two punt returns in a season.

Waddle’s return would mean Ohio State would have to at least devise a strategy to counter in two phases of the game, and Ohio State defensive coordinator Kerry Coombs is planning accordingly.

"I think you absolutely have to prepare like he's going to play," Coombs said, "and I would promise you that he's an extraordinary athlete, extraordinary receiver."

Ohio State’s defense knows what it’s up against if Waddle returns. But the threat of the offense is the first concern.

Along with Smith, there’s quarterback Mac Jones, running back Najee Harris and three formidable receivers not named Smith or Waddle to contend with. But remember, the Buckeyes just handled Trevor Lawrence, Travis Etienne and Amari Rodgers.

The challenge the defense faces will tax every one of its individual units, but the stress test will come on the edges. Linebackers Baron Browning and Justin Hilliard will be forced to run sideline to sideline. Cornerbacks Shaun Wade and Sevyn Banks will be forced to cover their thirds, and their quarters, with exacting efficiency or risk giving up six.

Leaning on the rush defense is a start for Ohio State. The Buckeyes boast the No. 2 run defense in the country, allowing just 89.1 yards on the ground a game.

If Harris rushes for 100 yards on the Buckeye defense, he’ll be the first. No player has amassed more than 85 rushing yards in a game against Ohio State all season.

Alabama offensive coordinator Steve Sarkisian will be the first to tell you his team needs to run the ball well to throw the ball down the field.

One-on-one matchups on the perimeter come from forcing eight men in the box. Then he can ask players like Smith, John Metchie and Miller Forristall to win their routes against what amounts to man-coverage.

Waddle hasn’t played since Oct. 24, but what he put on tape in the first four games of the season remains the foundation of the legend building around him.

In each of those four games to start 2020, he notched at least 120 receiving yards, averaging a gaudy 22.3 yards per catch and scoring four TDs.

If Waddle plays in the national title game, it will be his first appearance in 79 days. A memorable day for him would mean no longer needing to explain why he was away, but to let his game say what John Wick once did.