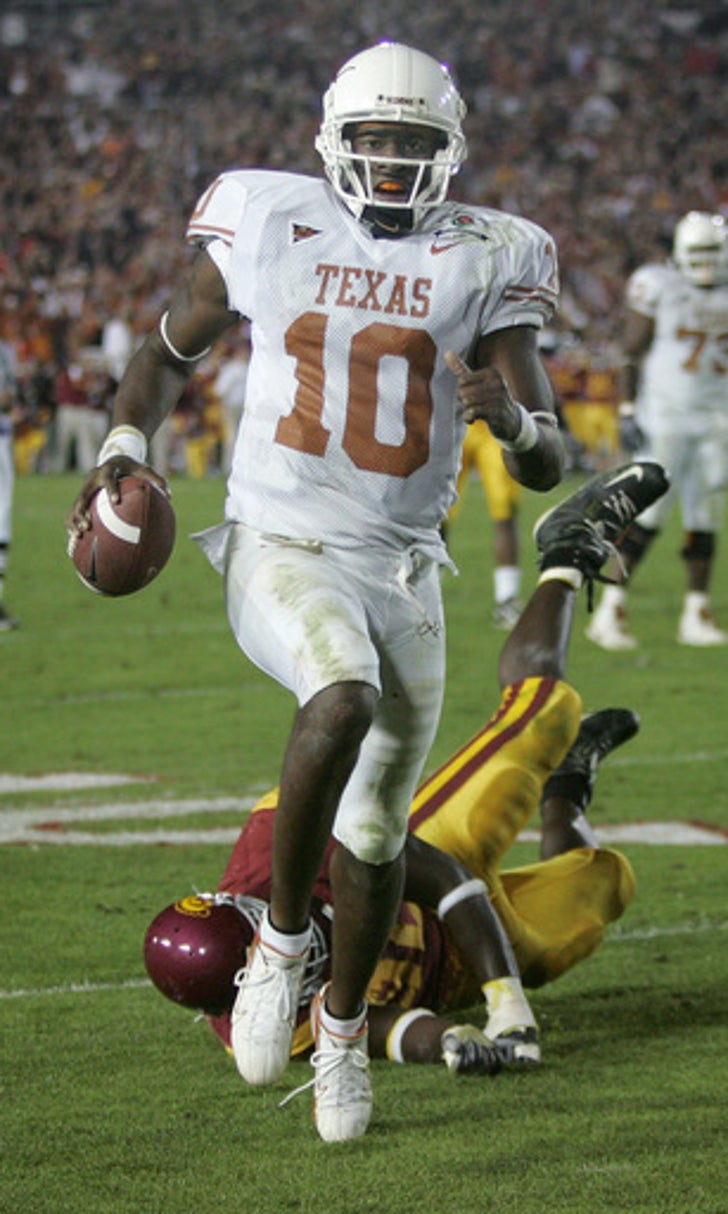 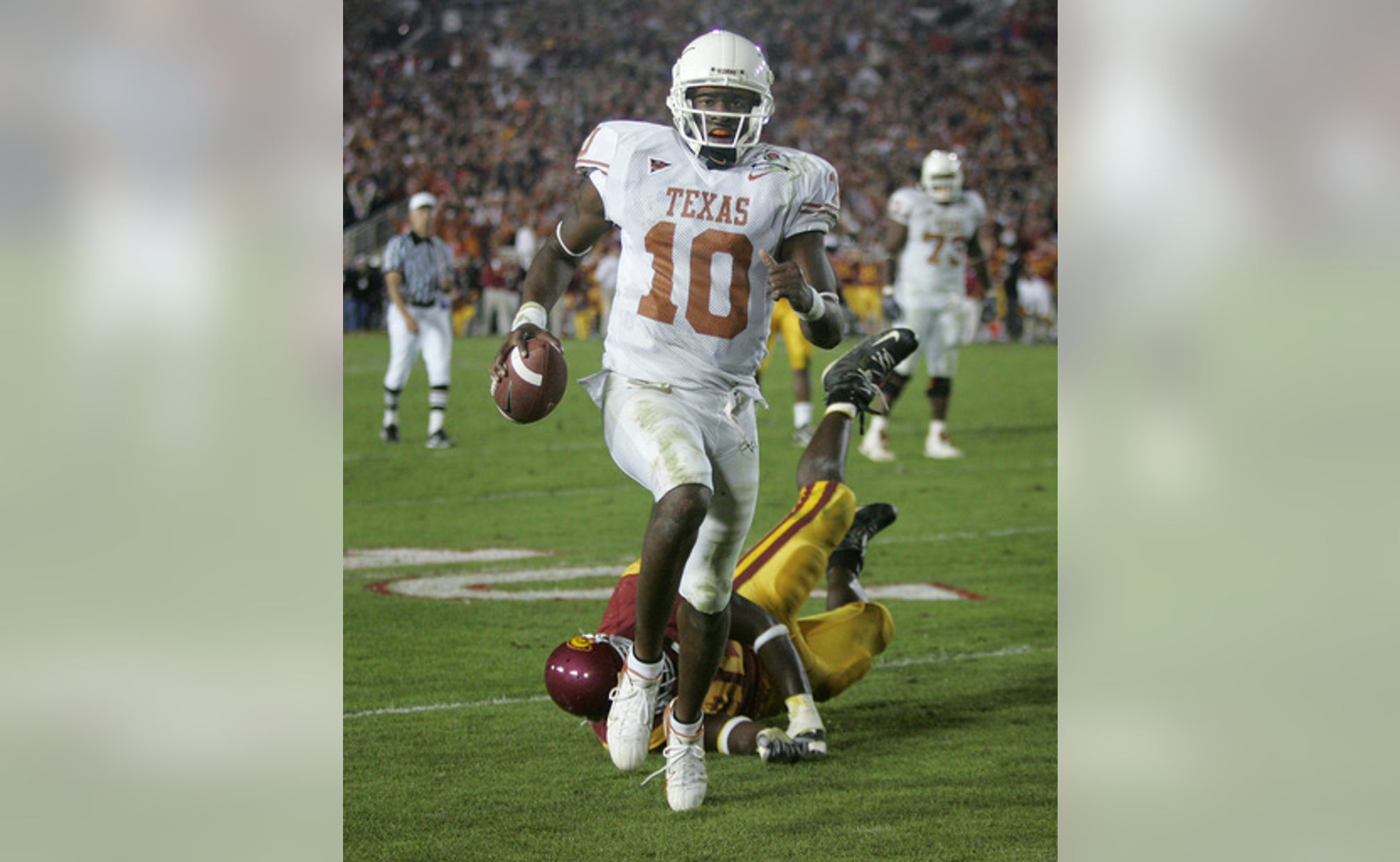 When Texas and Southern California last met on the football field, the Longhorns and Trojans put on a show many still call the greatest game in college football history.

Surrounded by Hollywood-level hype and contested by a host of players who would go on to the NFL, Texas' 41-38 upset victory in the 2006 Rose Bowl is still talked about today for its superstar performances, coaching decisions and two decisive fourth-down plays in the fourth quarter.

The victory, largely on the arms and legs of quarterback Vince Young, earned the Longhorns their first national title in 36 years and denied the Trojans a chance to make history with three in a row.

Texas (1-1) and No. 4 USC (2-0) meet again in Los Angeles on Saturday night, and here's how some former Longhorns and Trojans players look back at that national championship game, from the buildup to Young's winning touchdown:

Both teams came in undefeated but USC was the darling of the national media and favored to win. Texas had won the Rose Bowl the previous season but the Trojans were a two-time national champion with two Heisman Trophy winners in tailback Reggie Bush and quarterback Matt Leinart. Bush had won the Heisman that season over Young.

For a month before the game, USC was compared to the all-time greatest teams in college football, which left the Longhorns seething. USC coach Pete Carroll's embrace of the Hollywood scene of celebrities hanging around practice and on the sideline fueled the hype.

''I just remember us being so (mad) the whole time. We felt so disrespected,'' Texas defensive tackle Tim Crowder said. ''We knew we had just as much talent as they did. We were just some country guys, so we knew we were tough.''

Young was quietly burning inside. After losing the Heisman to Bush, Young told senior teammates ''get the boys ready. We ain't losing.''

Few outside the locker room would believe him. USC had been dominant the previous two seasons and the Trojans believed a win was inevitable, former USC fullback Brandon Hancock recalled. The idea they could lose never crossed their minds.

''It was the dynasty of Pete Carroll and fulfilling manifest destiny,'' Hancock said.

After a slow start, USC led 7-0 when Bush took a screen pass and was off to the races for another score, or so everyone thought. But tracked down by two defenders, Bush shocked everyone when he tried to lateral to a trailing Trojan teammate. The ball hit the ground and Texas safety Michael Huff recovered. An early knockout punch didn't get delivered and Texas scored on its next three possessions to lead 16-10 at halftime.

Huff, who won the Thorpe Award as the nation's best defensive back that season, said Bush and the Trojans were likely surprised by Texas' speed on that play. Had Bush been free, he never pitches it.

''In every other game, he would break away. We had Texas speed. He wasn't used to people running with him,'' Huff said.

That Texas speed killed another USC drive in the second quarter when Longhorns safety Michael Griffin roamed from the middle of the field to intercept a would-be touchdown pass to flanker Steve Smith. Griffin somehow got one foot in bounds in the corner of the end zone.

''I knew I caught it. I didn't know if I was in bounds. If Leinart had put more touch on it to get it there, it would have been a touchdown. I went the wrong direction at first,'' Griffin said.

''One of the greatest picks ever,'' Huff said.

Two yards. That's all USC needed with the ball at the Texas 45-yard line to put the game away, leading 38-33 with just over 2 minutes left. Instead of punting and perhaps pinning Young and Co. deep into their own end, Carroll went for the first down.

Fullback LenDale White, who had already pounded Texas for 123 yards and three touchdowns, was the obvious choice the get the ball and Texas knew it. In fact, Bush was on the sideline watching when White took the handoff and plunged into the line, only to get stuffed inches short by Texas defensive end Brian Robinson, Huff and a host of Longhorns.

For the next decade, USC fans would ask why Bush wasn't on the field to at least serve as a decoy to open up the middle.

Robinson was supposed to get up field, but ignored orders, stunted inside and ran into White.

''Every great team has that renegade, that guy that says, `I'll go make a play,''' Crowder said.

''It was one yard,'' White told the Los Angeles Times. ''One yard stopped us from being great forever.''

Texas still had to score.

Young had already rushed for 198 yards when he stood in the shotgun on 4th-and-5 from the USC 8-yard line with 19 seconds to play. Pressured on his left side, Young took off to his right, beat diving Trojans defensive end Frosty Rucker to the edge and loped into the end zone. Young looked so casual with the ball, carrying it in the palm of his huge hand the whole way.

Hancock was watching from the sideline.

''The second I saw him plant and go, it was over,'' Hancock said.

''There was a lane and my instincts took over. It was wide open,'' Young said. ''I give Rucker a hard time every time I see him or talk to him.''

Young says he sometimes watches replays of the game on the Longhorn Network.

Day, Buckeyes Leading The Way
As the Big Ten returns this weekend, Ohio State coach Ryan Day joined 'Breaking The Huddle' to break down what's ahead.
8 hours ago