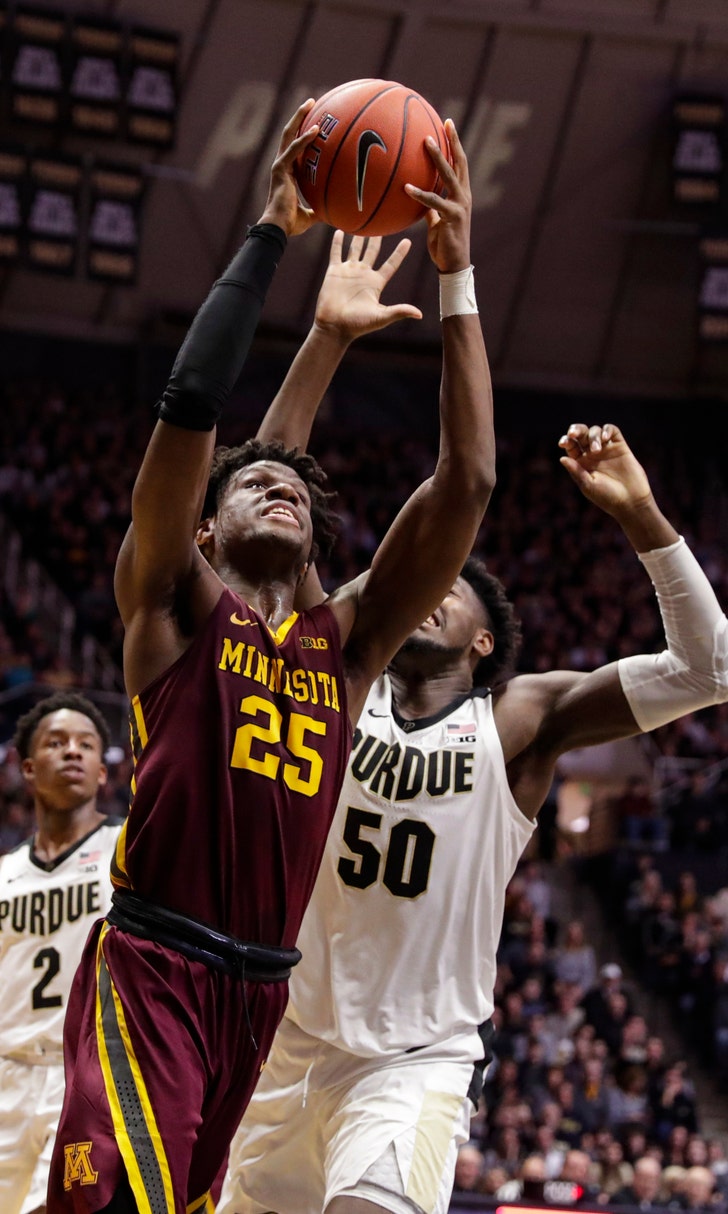 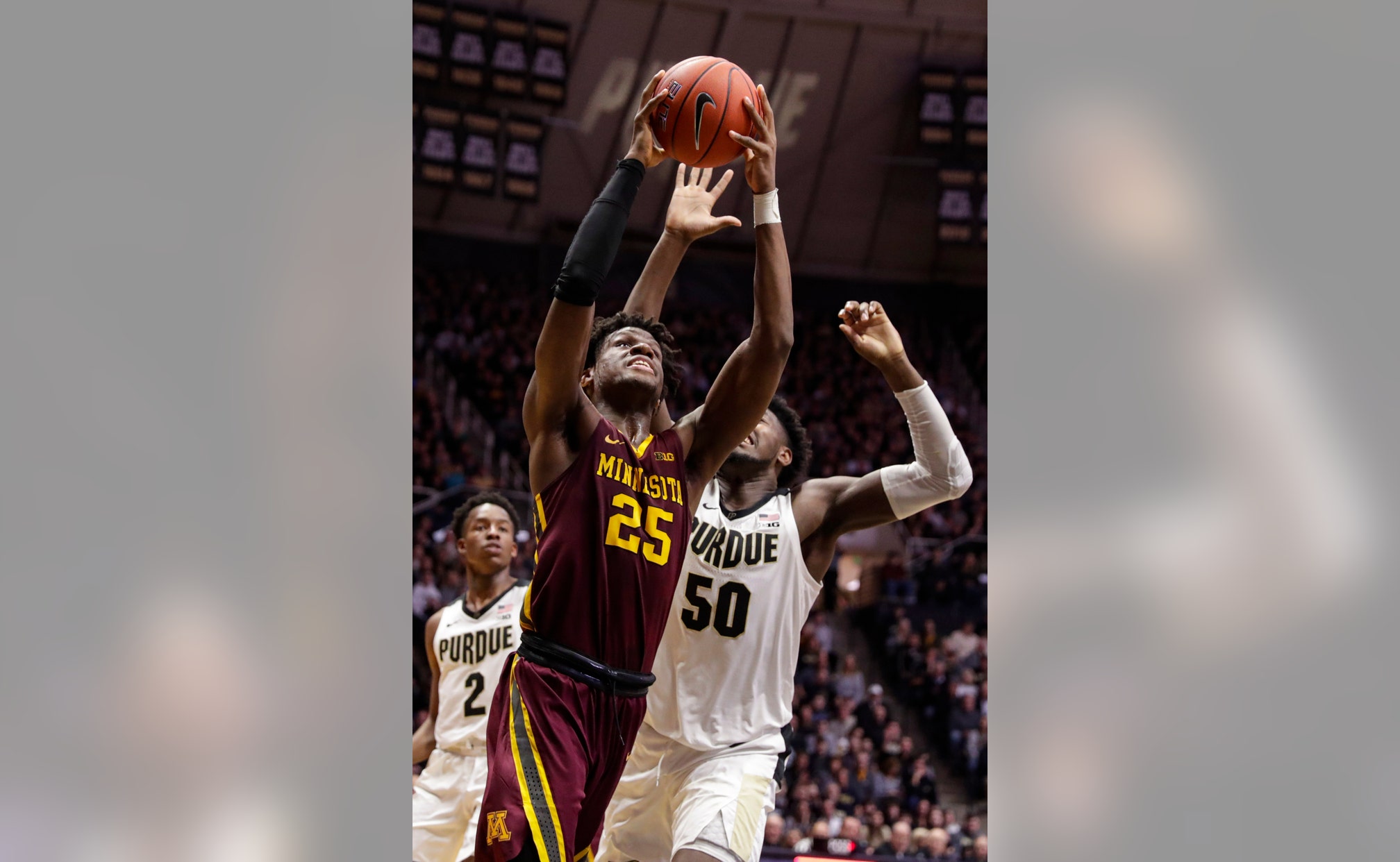 MINNEAPOLIS (AP) — Of all the evidence from the past two decades that Minnesota has been mostly a middle-of-the-pack program, the lack of a presence in the NBA has been one of the biggest knocks against the Gophers.

Daniel Oturu could be the next one to turn pro and start that process of catching up. Even if that means losing his 6-foot-10 double-double machine earlier than the exhaustion of his eligibility, well, coach Richard Pitino will be the first one encouraging him on.

Oturu, the sophomore center who is one of three Minnesota natives in the regular rotation, is third in the country in rebounds (12.4 per game), eighth in blocks (3.14 per game) and 14th in field goal percentage (63.3). He's second in the Big Ten with an average of 19.1 points per game.

NBA teams have already begun to seek insight from Pitino, and the coach and the player have had multiple conversations about the possibility of Oturu declaring for the draft.

“We’re not going to hold you back. Let’s just talk about it, constantly work on it,” Pitino said. “If he’s got that opportunity at the end of the year? I’m all for it. I support it. But the NBA draft is not in January, and that’s for everybody. There are so many good opportunities for Daniel to show he’s one of the best bigs in the country. I believe in him, and I’m excited to continue to work through this and see where we go. It’s a great, great problem to have.”

The Gophers lost guard Amir Coffey one year early, after reaching the second round of the NCAA Tournament last season. Coffey wasn't drafted, but he signed a two-way contract with the Los Angeles Clippers and appeared in two recent games after extensive time in the NBA G League. That's where former Gophers forward Jordan Murphy has been playing for the Minnesota Timberwolves' affiliate, after finishing a four-year career as the all-time leading rebounder and second-leading scorer for the Gophers.

Minnesota had only two players appear in the NBA during the 2010s, though, with Kris Humphries the last one drafted in 2004. Joel Przybilla, also a first-rounder in 2000, was the other former Gophers player to play in the league in the just-ended decade. The 1996-97 team that reached the Final Four had four eventual first-round picks: Bobby Jackson, John Thomas, Sam Jacobson and Quincy Lewis.

That's why Pitino, even though a premature departure by Oturu would take away his best player, has no trouble embracing the topic. When Coffey made his debut with the Clippers two weeks ago, Pitino sent him a text message asking him to send a jersey so the Gophers can display it at their practice facility.

“That’s too long to not have guys in the NBA. You want your guys to feel that. That’s the carrot you dangle in front of guys to motivate them,” Pitino said.

Oturu, who's listed at 225 pounds, is the son of Nigerian immigrants who grew up in the Twin Cities area and became one of the country's top recruits out of Cretin-Derham Hall High School. He has a deep appreciation of NBA history, always up for engaging with teammates in a present-past debate about which player was better.

“That’s a dream of his. Nobody’s going to hold him back,” Pitino said.

Oturu has a decent mid-range shot, with the athleticism to move around the court that will be critical in the pros. Developing more post moves and continuing to get stronger will be important next steps. He's improved his conditioning to the point where he's playing an average of 33 minutes per game, about a nine-minute increase from his freshman year.

The Gophers (8-6, 2-2) have arrived at a crucial stretch of their season, with the potential for several wins that could boost their NCAA Tournament prospects. Each of their next three games are against teams currently ranked in the top 20 of the Associated Press poll, at No. 8 Michigan State on Thursday and home against No. 19 Michigan on Saturday and against No. 20 Penn State on Jan. 15.

Oturu will undoubtedly go a long way toward whatever success the Gophers are able to attain.

“Whether we’re down or we’re up," point guard Marcus Carr said, "he’s constantly giving us energy.”

You Can Only Hope to Contain Luka
So far this season, there's been no stopping Iowa's Luka Garza. He can't keep up with this legendary pace – can he?
23 hours ago