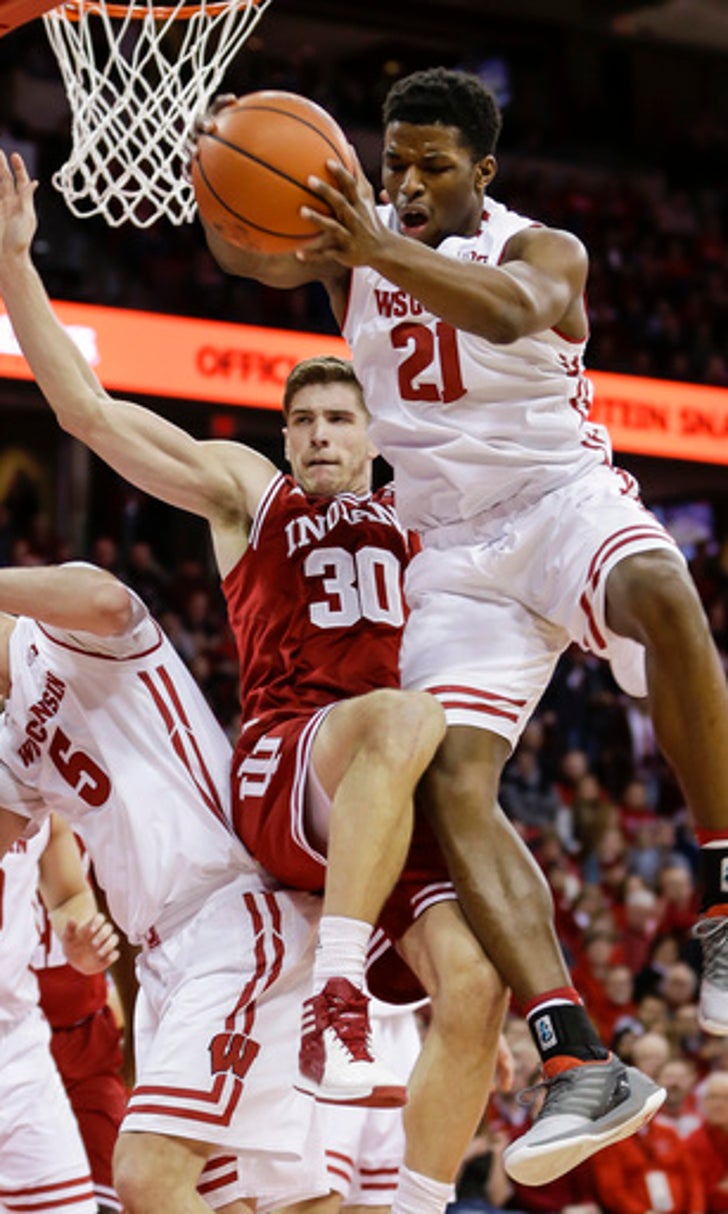 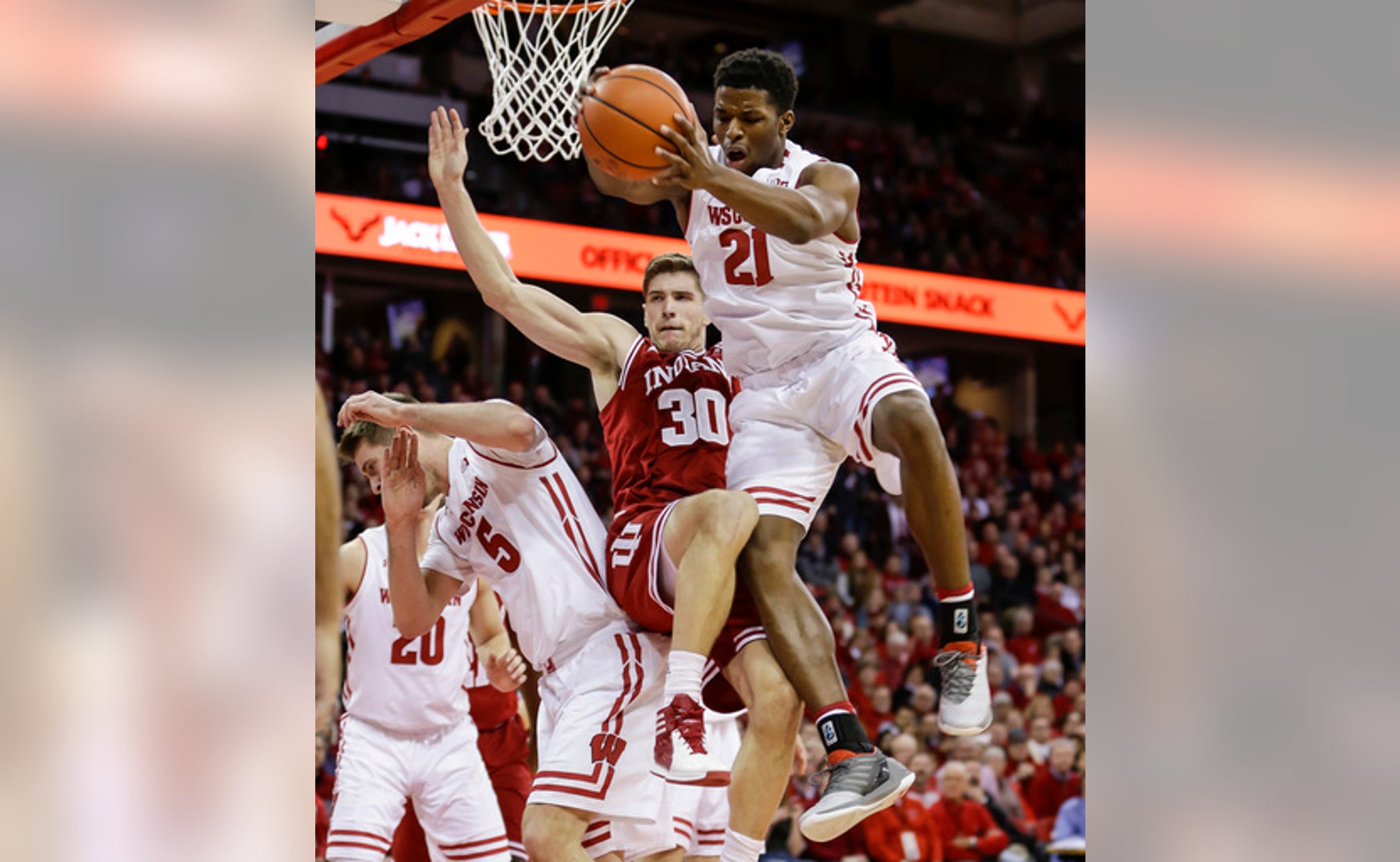 MADISON, Wis. (AP) Greg Gard looked down at the stat sheet to find something to harp on about Ethan Happ.

He missed four foul shots and committed three turnovers. But those miscues got glossed over by all the good things that Happ did on Tuesday night.

The athletic forward had 28 points in one of his best all-around efforts of the season, and undermanned Wisconsin overcame another injury to beat Indiana 71-61. Happ hit 11 of 17 shots, adding nine rebounds, four steals and two blocks for the Badgers (9-7, 2-1 Big Ten).

Especially in the second half, when the Badgers held a 20-8 advantage on the boards.

''We were, to be honest with you, soft on the glass,'' Indiana coach Archie Miller said. ''In the second half, the game really changed on second shots.''

Collin Hartmann led Indiana with a career-high 18 points, hitting 4 of 8 from behind the arc off the bench. Robert Johnson added 14 points and five assists.

But the Badgers still won their fifth straight game despite being without starting guard Brevin Pritzl, who was scratched 90 minutes before tipoff with a head injury after getting hurt in shootaround.

Brad Davison added 14 points for Wisconsin, which extended its winning streak over the Hoosiers (8-7, 1-2) in Madison to 16 games.

''I think it's just something at Wisconsin where it's next man up - that's how we transition with new guys in different roles, the 6-foot-10 Happ said.

Indiana had no answer for Wisconsin's athletic, do-it-all forward.

After trailing by three at halftime, the Badgers took over slowly and led by about 10 for most of the last five minutes. Happ muscled his way around three defenders for an offensive rebound and putback for a 62-51 lead with 4:34 left.

Happ added four assists, including a pass out of the post to an open Davison on the wing for a nine-point lead with 6:51 left. Indiana's Josh Newkirk slipped on the other end with the ball for a turnover to camp the momentum-swinging stretch for Wisconsin.

Hartman had 13 points in the first half to help Indiana take a 33-30 lead at the break. But the Hoosiers ended up falling to 0-4 this season on the road.

Indiana: Hartman, who was averaging 5.3 points, hit 3 of 5 from 3-point range and took advantage of open looks from the perimeter in the first half. He helped make up for the foul trouble that plagued leading scorer Juwan Morgan, who had two points and two fouls in the half. Morgan, who averaged 18.4 points in December, finished with 17 against Wisconsin

Wisconsin: Gard's team continues to get tested with backcourt injuries after Pritzl joined fellow guards D'Mitrik Trice (foot) and Kobe King (knee) on the sideline. Davison is already playing through a shoulder injury, and 6-foot-5 Khalil Iverson's game is more suited to a small-forward role. The only other healthy true guard is former walk-on T.J. Schlundt, a junior who earned his scholarship before this season. Six-8 Aleem Ford, who normally starts at forward, also picked up backcourt minutes.

Down another key rotation player, the Badgers did get important contributions from normally little-used bench players Aaron Moesch, who had two points, three rebounds and two assists in 25 minutes; and Schlundt, who had three points on a 3-pointer and a steal in 20 minutes.

''Collectively, I think every guy can raise their level a lot,'' he said. ''You just don't know what you're going to get game to game.''

The team had two or three hours to have to adjust to playing without Pritzl. It was quite the difference from a month ago, when the Badgers were blown out by Marquette in their first game without Trice and King.

Added toughness has been the biggest difference to Gard.

''In terms of the toughness factor, that needs to be our identity,'' Gard said.

Indiana: Wraps up a two-game road swing with visit on Saturday to Minnesota.

Wisconsin: Begins a three-game stretch on the road with a trip to Rutgers on Friday.