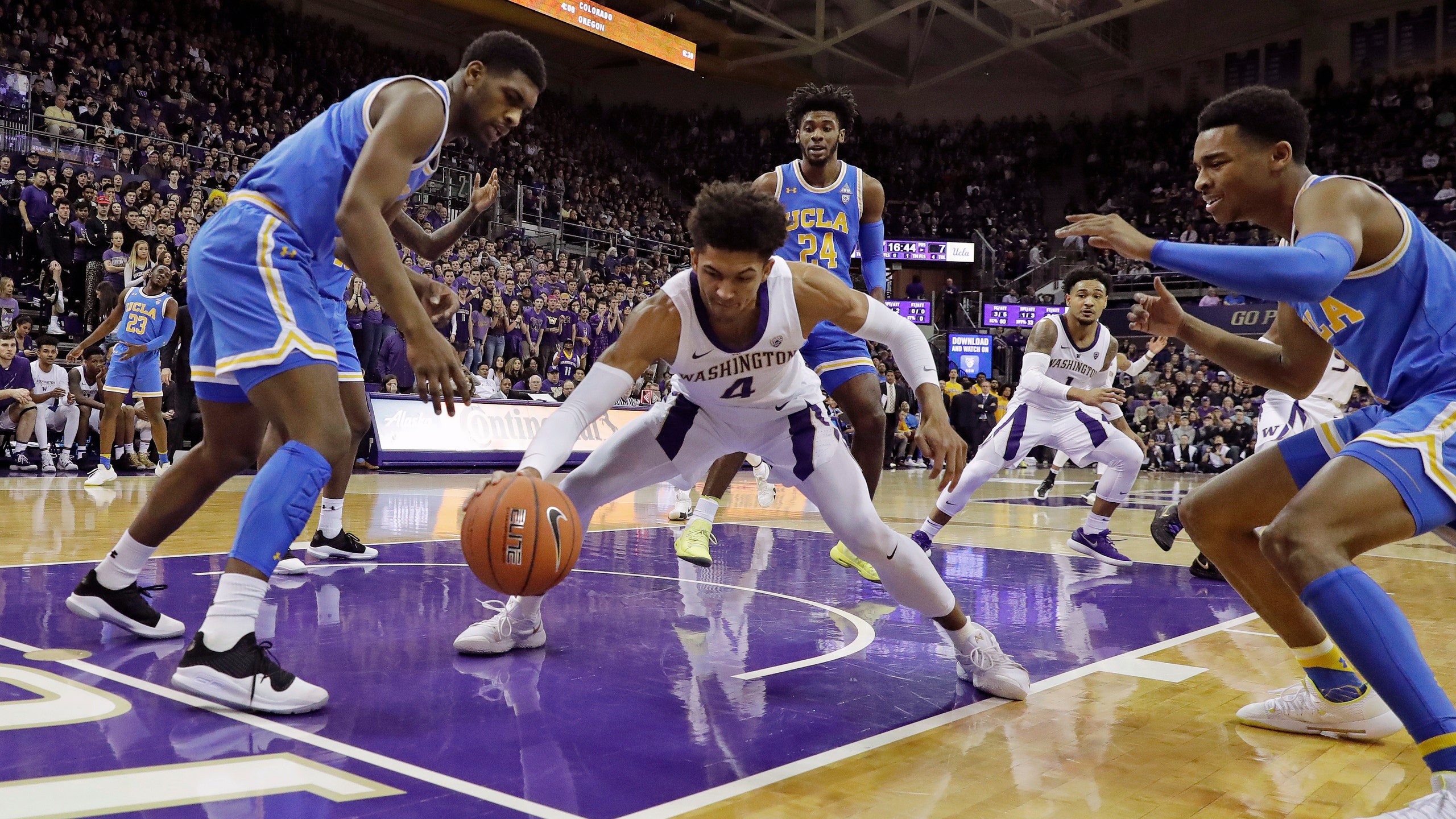 SEATTLE (AP) — While Mike Hopkins continues to preach that nothing tangible has been accomplished during Washington's 11-game win streak and surge to the top of the Pac-12 standings, he still wanted those responsible for the Huskies latest triumph to get recognized from the sold-out crowd.

So in the closing moments, Hopkins subbed out his stars to give them the ovation they deserved after reaching an accomplishment that hasn't happened often in Pac-12 play.

David Crisp and Jaylen Nowell both scored 15 points, Matisse Thybulle added 14, and Washington finished the first half of Pac-12 play unbeaten after a 69-55 win over UCLA on Saturday.

Washington has taken advantage of a beneficial schedule and the overall state of the conference to separate itself as the class of the league at the midway point even if the past two wins have been filled with some flaws.

"I don't think we played great tonight. I'd say good and below, the last two games," Hopkins said. "We've won, but where we want to be and what we want to accomplish it's not good enough. We still need to improve in so many areas."

It was not one of Washington's more eye-pleasing performances, especially in the first half when both teams were more interested in committing turnovers than getting good looks at the basket. But the Huskies made 11 3-pointers, including four in the first half from Crisp, to help offset the early sloppiness.

Thybulle finished with seven steals, two off the school record. He had six in the first half.

"It's hard to have an answer for five guys. We were able to get them from all areas of the court," Thybulle said. "We were hitting 3s, we were getting to the hoop, we were getting guys in the post. When you don't know where a team is going to be attacking you from, it's really hard to cover every angle."

Kris Wilkes led UCLA (12-10, 5-4) with 20 points and Prince Ali added 12, but the Bruins were unable to complete their first road sweep since late in the 2016-17 season when they swept the Arizona schools.

But the Bruins couldn't overcome a first half that was defined by sloppy turnovers by both teams. Washington continued to show it struggles when facing full-court pressure defense, while UCLA was simply careless against the Huskies zone. UCLA committed 18 turnovers in the first 20 minutes, three more than its season average for an entire game. The Bruins had nearly as many turnovers (18) as shot attempts (23) in the first half.

"I think it was a combination of a little sloppy on our part, and then I think you've got to give Washington a lot of credit. They're really good here at home," UCLA interim coach Murry Bartow said.

Washington never trailed the final 30 minutes, but it wasn't until a late flurry of 3s that finally gave the Huskies a comfortable cushion. Leading 49-41, Thybulle hit a pair of 3s, Dominic Green added another and Sam Timmins 3-point play on a dunk helped Washington take its biggest lead at 63-48 with four minutes remaining. Timmins had nine points and six rebounds in 24 minutes off the bench with Hameir Wright in foul trouble and Washington losing forward Noah Dickerson to an injury early in the second half.

UCLA: The Bruins turnover problems were better in the second half with just five after halftime, but the wasted possessions in the first-half — especially early after building an eight-point lead — ended up being a major factor.

Washington: The Huskies zone defense continues to work against conference foes. Washington has held every conference opponent to 70 points or less. The 55 points by UCLA was a season-low.

Washington played the final 18 minutes without Dickerson. He briefly left the game in the first half after appearing to injure his left arm, but it was a sprained right ankle injury early in the second half that sent him to the bench with a bag of ice for the rest of the game. Dickerson was injured behind the play on a fastbreak. He finished with three points and six rebounds in 14 minutes. Hopkins said he didn't believe it would be a long-term injury concern.

This should be the week Washington returns to the AP Top 25. The Huskies started the year at No. 25 in the preseason but quickly departed. Washington was the third team outside the poll last week.

Washington: The Huskies face a major road test traveling to Arizona next Thursday.