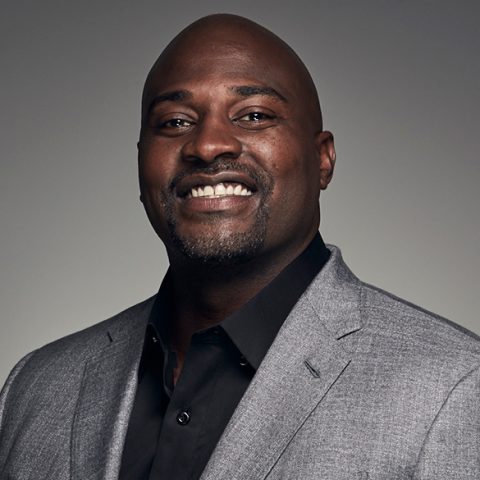 Prior to joining FOX Sports, Wiley was co-host of “SportsNation” on ESPN and co-hosted the radio show “Afternoons with Marcellus & Travis” on ESPNLA 710am. Wiley previously served as an NFL analyst for ESPN, making regular appearances on “NFL Live,” “SportsCenter,” and ESPNEWS, while also contributing to ESPN’s Super Bowl coverage. He was also a host of “Winners Bracket” on ABC. Wiley joined ESPN in 2007, primarily as a studio analyst on ESPN2’s” First Take.” He also served as a game analyst for ESPN’s Arena Football League telecasts in 2008.

When not working on his broadcasting career, Wiley oversees his portfolio of business interests, touring as a motivational speaker and using is talents to make a difference in his community. “Project Transition,” Wiley’s charitable organization, provides leadership training to at-risk youth with the goal of creating tomorrow’s thought leaders.

Marcellus has also added ‘author’ to his list of media accomplishments, and his first autobiography titled, “Never Shut Up” will be released in October. The book is about the life, opinions and unexpected adventures of an NFL Outlier.

A second-round pick of the Buffalo Bills in the 1997 NFL Draft, Wiley played for four teams – Buffalo (1997-2000), San Diego Chargers (2001-03), Dallas Cowboys (2004) and Jacksonville Jaguars (2005-06) – and was one of the NFL’s top defensive players during the prime of his career. In 2001, Wiley led the Chargers with a career-high 13 sacks and five forced fumbles.  He was voted a starter for the AFC in the Pro Bowl and named to Pro Football Weekly’s All-AFC Team. The previous season he led the Bills with 10.5 sacks. Wiley was named one of the Top 50 players in the NFL at any position twice by Pro Football Weekly. He was also nominated for the Walter Payton Man of the Year three times for his volunteer and charity work.

Wiley played college football at Columbia University, helping the Ivy League program improve from a 2-8 record his freshman year to 8-2 his senior season. He earned first team all-conference honors in 1994, and was named Sports Illustrated National Defensive Player of the Week when he had two sacks, forced and recovered a fumble, intercepted a pass and scored a touchdown as a running back while playing on both sides of the ball against Yale. He was also voted team captain, All-Ivy League (twice), Sid Luckman MVP and an All-American in 1997. Wiley graduated from Columbia University in 1997 with a bachelor of science degree in sociology.

Wiley grew up in Compton, California. As a child, he discovered his passion and talent for sports excelling both in football as well as track & field. He graduated from Saint Monica Catholic High School in Santa Monica, where he was an All-Westside, All-Conference and All-League selection. His No. 3 was retired in 2002.

Marcellus currently lives in Los Angeles with his wife Annemarie and their three children.