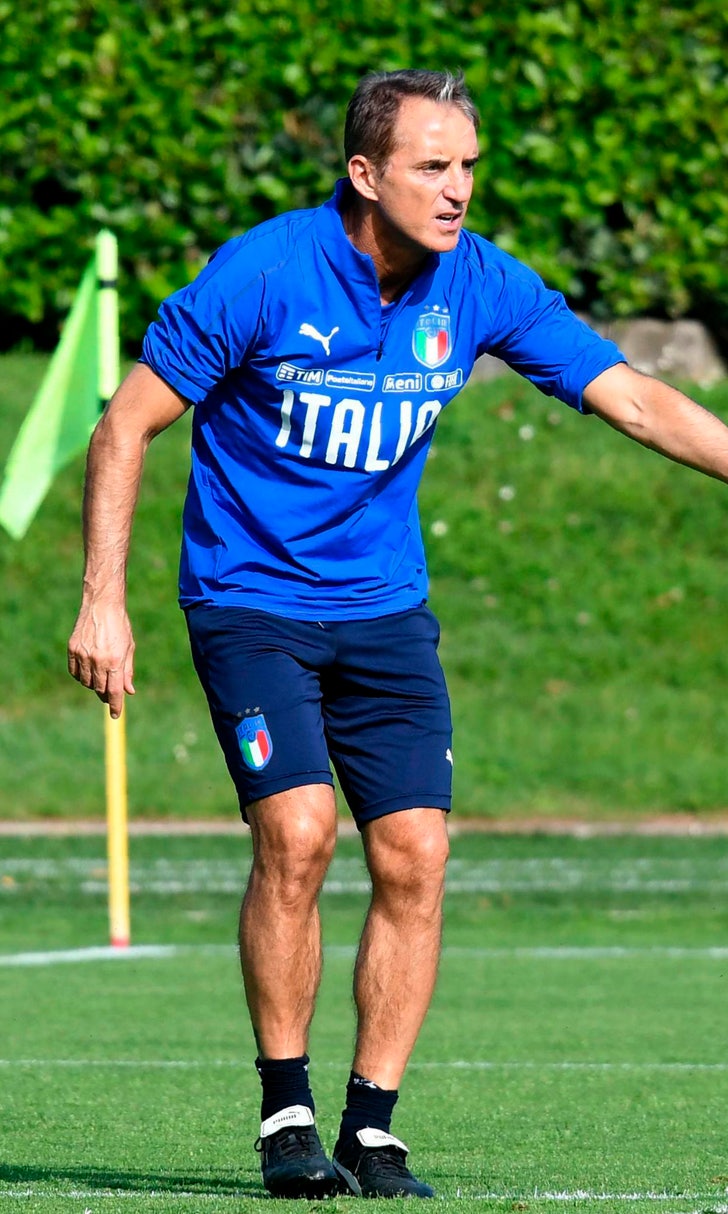 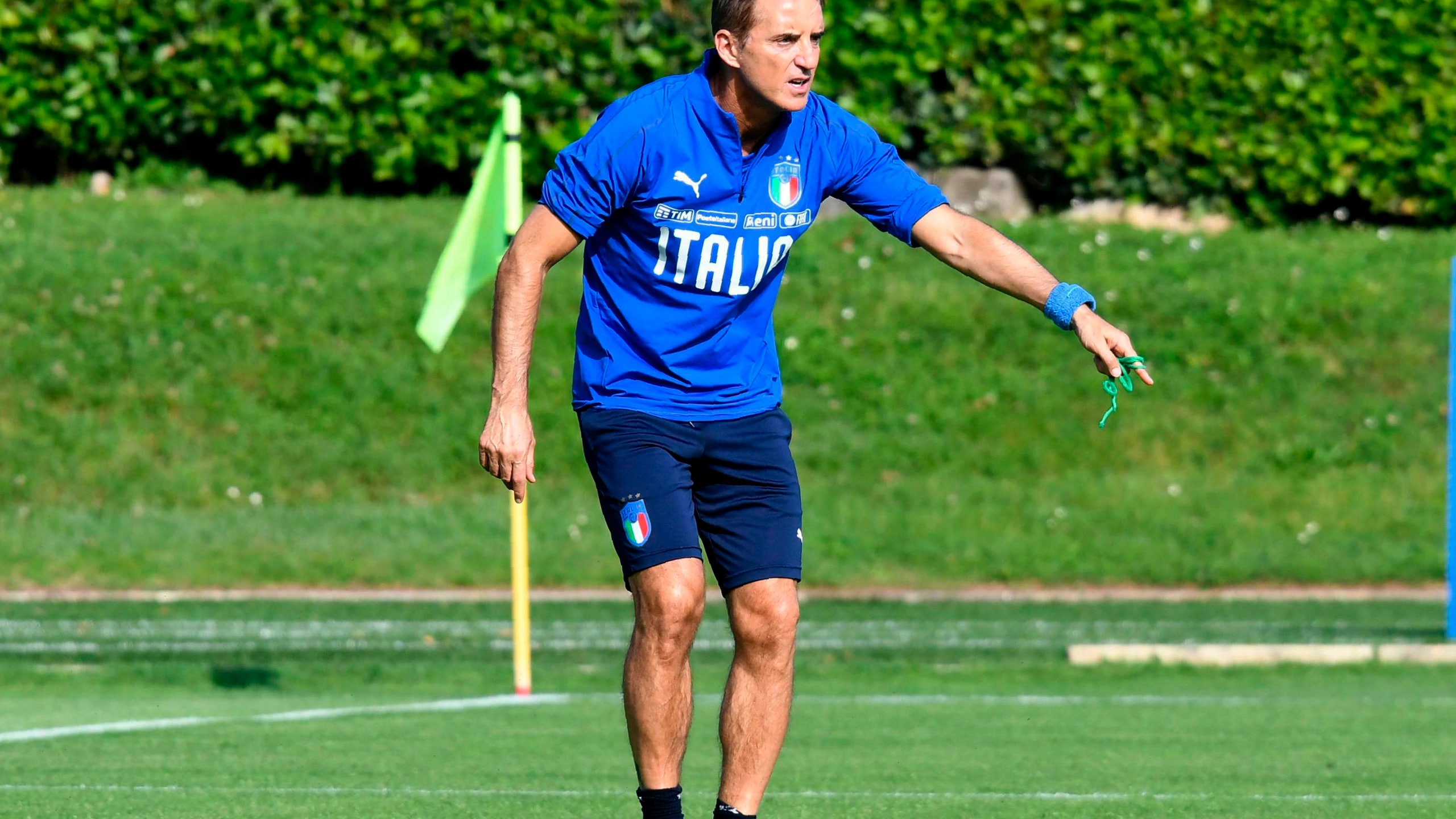 BERLIN (AP) — World Cup winner France can take a major step toward booking a spot at the 2020 European Championship when it takes on Turkey this weekend in the last round of qualifiers before the summer break.

France and Turkey both have six points from two games in Group H, making their meeting in Konya on Saturday one of the highlights of the matches that will be played between Friday and Tuesday.

Spain, Italy and Germany are also all in action, while the Netherlands, Portugal, England and Switzerland are busy playing in UEFA's inaugural Nations League final four.

Here is a closer look at the 10 groups ahead of the third and fourth rounds of qualifying for the 24-team tournament next year.

England has taken command of Group A with big wins over the Czech Republic (5-0) and Montenegro (5-1), but its participation in the Nations League finals will give other teams a chance to catch up.

The Czechs hope to rebound with a couple of home wins over Bulgaria on Friday and Montenegro on Monday. But the team is missing two key playmakers, Vladimir Darida and Borek Dockal, due to injuries.

Aiming to reach a first tournament since Euro 2004, Bulgaria, which drew its first two qualifying games in March, is second in the group with two points.

With Portugal busy at the Nations League finals, Ukraine and Serbia aim to build big leads in Group B. They meet Friday with Ukraine top of the group on four points - Portugal has two after a slow start - and Serbia unbeaten in its eight games since the World Cup. New Real Madrid signing Luka Jovic could start for Serbia.

Germany is still trying to come to terms with its shambolic World Cup defense in Russia last year. Coach Joachim Löw took the drastic decision to axe experienced Bayern Munich trio Thomas Müller, Mats Hummels and Jerome Boateng in March, when he hoped for a reaction against the Netherlands in the side's opening game in Group C. It responded with a somewhat fortunate 3-2 win in Amsterdam, thanks to an injury-time winner from Nico Schulz.

With the Netherlands busy in Portugal, Löw's side can further boost its confidence with wins in Belarus on Saturday and at home to Estonia on Tuesday.

Löw will be absent, however — the Germany coach suffered an injury while training and assistant coach Markus Sorg will instruct the side in his place.

Denmark plays two home qualifiers in the coming days, with star playmaker Christian Eriksen looking to get over the disappointment of losing the Champions League final with Tottenham against Liverpool.

Ahead of games against Ireland and Georgia, Eriksen has said in an interview that he "might want to try something new" in his club career.

"I hope there will be a clarification during the summer," Eriksen told Danish magazine Ekstra Bladet. Before then, he'll look to help the Danes get their first wins of Euro qualifying.

Real Madrid's loss might be Wales' gain when it comes to Gareth Bale.

The forward was barely used by Real Madrid in latter stages of the La Liga season — he didn't even come off the bench for the final game — and his future has been the subject of much scrutiny.

It will mean Bale is fresh and maybe keen to put himself in the shop window for potential suitors, when the Welsh play qualifiers against Croatia and Hungary.

Wales coach Ryan Giggs saw Bale in a recent training camp in Portugal and said: "(He) struck me as a professional who still loves football."

Wales won its first Euro 2020 qualifier, 1-0 against Slovakia, and is one of four teams on three points. The others — Slovakia, Hungary and Croatia — have all played two games.

Hungary plays Azerbaijan on Saturday before hosting Wales on Tuesday, when Slovakia is away to Azerbaijan.

Group leader Spain resumes qualifying campaign without Luis Enrique, who also missed the first two qualifiers for personal reasons. The coach again won't be available when "La Roja" faces the Faeroe Islands away on Friday before hosting Sweden on Monday.

Luis Enrique remains active, though, receiving video feeds of the team's practice sessions at his home in Barcelona. He continues to do most of the planning for the training sessions, although the work has been delegated to assistant coach Robert Moreno and other members of his staff.

The Spanish soccer federation says it is fully supporting Luis Enrique and has not considered a change in command despite his long absence. It also said there's no timetable for the coach's return. Local media reports suggest his absence is down to a family member.

Poland is the early leader in Group G as it aims to reach a fourth consecutive European Championship, but few would have expected its closest rival to be Israel, which has never qualified but beat Austria 4-2 in March. Poland plays third-place North Macedonia on Friday before hosting Israel in Warsaw three days later.

With two defeats from two games, Austria tries to turn around a floundering campaign against Slovenia on Friday and North Macedonia on Monday.

Latvia hosts Israel on Friday before Slovenia on Monday.

France coach Didier Deschamps hopes to have star striker Kylian Mbappe back to face Turkey on Saturday after the Paris Saint-Germain forward picked up an ankle knock in a recent friendly.

Deschamps could also welcome Olivier Giroud back to the starting lineup.

France has already scored eight goals in two qualifiers and the bad news for Turkey is Giroud's return after Chelsea's recent Europa League win. Giroud scored in the final to top the Europa League's scoring charts and the veteran striker will be in the mood to add to his 35 international goals.

Deschamps could start with the attacking trio which won the World Cup final against Croatia, with Antoine Griezmann alongside Mbappe and Giroud. They have all scored one goal each in the first two qualifiers.

Griezmann netted his 29th international goal in the friendly against Bolivia.

Iceland hosts Albania on Saturday before Turkey on Tuesday.

Belgium is cruising at the top of Group I after beating Russia 3-1 in March, and is unlikely to face serious trouble against Kazakhstan on Saturday or Scotland on Tuesday. National-team duty has offered Eden Hazard an escape from the speculation about his future after he bid Chelsea fans goodbye following last week's Europa League final win.

Russia is using its home games against San Marino and Cyprus as a chance to visit two of the smaller host cities from last year's World Cup, Saransk and Nizhny Novgorod. The Russians played an unofficial friendly on Monday against second-tier club Chertanovo, winning 6-0. However, midfielder Yuri Gazinsky hurt his shoulder and has been ruled out of the upcoming games.

Playing Cyprus on Saturday offers Scotland a chance to rebuild its confidence after a surprise 3-0 loss to Kazakhstan in March.

Italy's new attack-minded approach is a sign of how far the Azzurri have come under Roberto Mancini since he took charge following the disappointment of failing to qualify for the 2018 World Cup.

It faces a tougher test on Saturday at second-place Greece, which is two points behind Italy, but Mancini is set to stick to his style of attacking football.

Mancini tested several options for the trident attack in a friendly against the Bologna youth team on Tuesday and Italy won 17-0, with 13 different players getting on the scoresheet.

"If we play attacking football that is entertaining and gratifying, then results are possible," Mancini said. "We are Italy, we can be like France and Spain in opening up a new era. It's a good moment in our football."

Christian Eriksen
share story
those were the latest stories
Want to see more?
View All Stories
Fox Sports™ and © 2021 Fox Media LLC and Fox Sports Interactive Media, LLC. All rights reserved. Use of this website (including any and all parts and components) constitutes your acceptance of these Terms of Use and Updated Privacy Policy. Advertising Choices. Do Not Sell my Personal Info