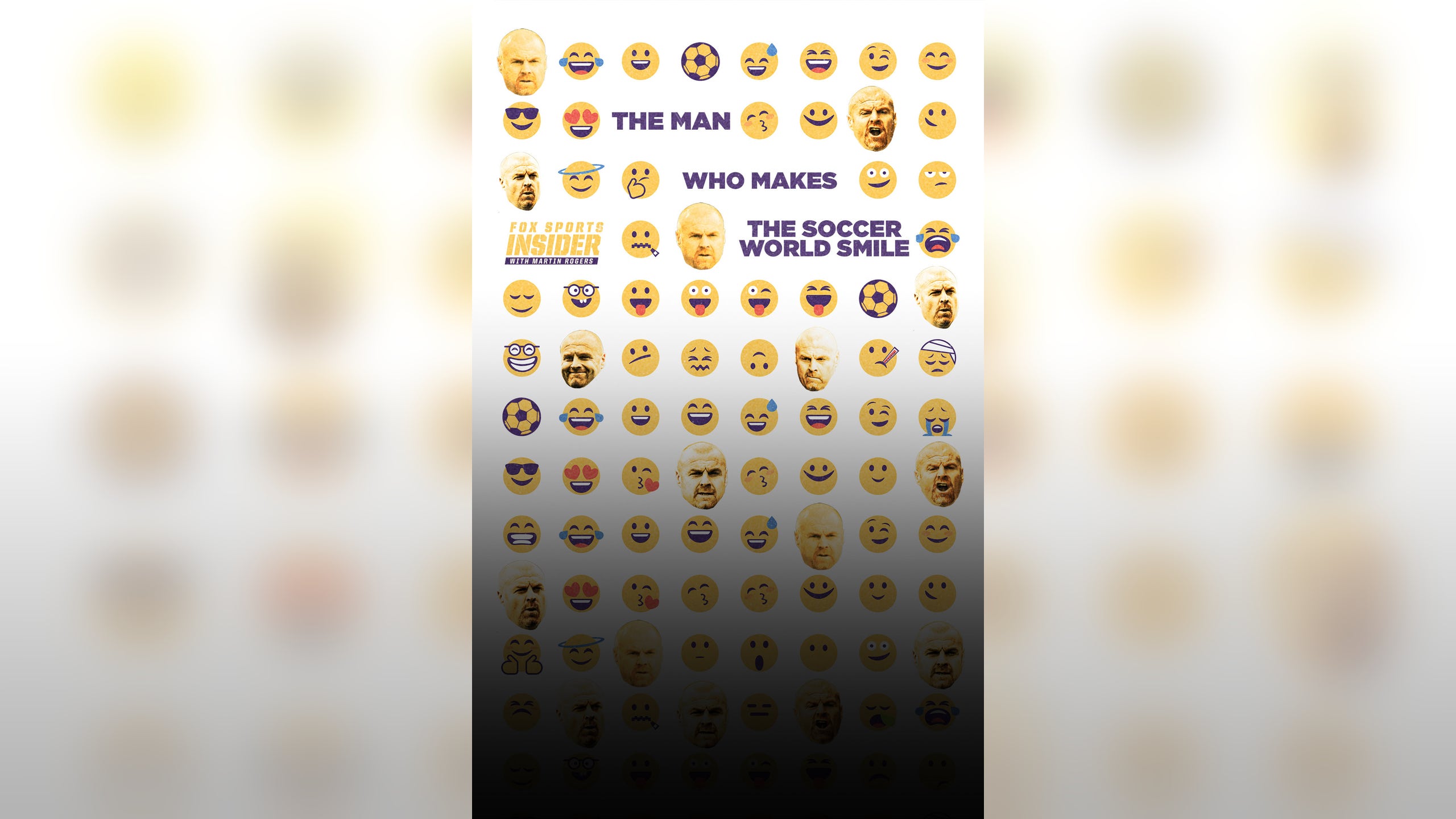 Being the longest serving head coach in the English Premier League (eight years and counting) means Sean Dyche has held more media conferences than any other manager during that time.

Yet on a recent virtual gathering with reporters, the Burnley boss still managed to find a topic that, according to my (kind of) extensive research, had never been discussed in such circles.

A week ago, Dyche spent the opening part of his media availability discussing the wonders of the aforementioned pub game, in which, on a (pre-lockdown) night out with friends, you try to spot facial similarities between any famous doppelganger and anyone passing by.

Dyche describes it better than me, so you might as well watch the clip, which was as hilarious as it was unexpected, perhaps because English soccer is starved of "haven’t-heard-that-before" comments from its leading figures. Thanks to Dyche's natural comic turn, the segment went viral.

Who then is the man who made the ultra-serious world of English soccer smile?

In pursuit of that answer, Dyche graciously agreed to a Zoom call this week, during which it disappointingly emerged that while the lookie-likies chatter was widely enjoyed, it also prompted a small negative reaction.

"It's a strange world we live in," he told me Thursday morning. "You try to enjoy a moment in time, and people say you should be focusing on your job. I’m 49. Believe it or not, I can have a bit of fun and still focus on my job."

It was a pretty straightforward equation, unscripted and devoid of agenda. Lookie-likies were on Dyche’s mind, so lookie-likies became the topic.

As an aside, it’s not just one of those endearingly quirky British things, either. Mario Manningham, who played for the New York Giants from 2008 to '11, once told me his team constantly played "doppelgangers" before they upset the New England Patriots at Super Bowl XLVI, with himself cast as rapper Ja Rule.

A prevailing sense of humor might offer some insight into how Dyche has stuck around in his job so long. Financial pressures lend a ceaseless intensity to English soccer, with hundreds of millions of dollars separating the EPL and the second-tier Championship. Burnley, a 1950s and '60s heavyweight that fell off the radar for decades, is now in its fifth straight season in the top division.

This year hasn’t been perfect, and ahead of Saturday’s game against Crystal Palace, the team is in 17th place out of 20. The bottom three get relegated each season, though Burnley does have an eight-point buffer to work with.

Dyche is a fun guy away from his working life, and he sees no reason to be anything different as he goes about his day job. His longevity doesn’t bring immunity from pressure, but it allows him to be himself. Talking to the media is the medium through which he can reach the club’s loyal fan base.

Yet it is a tricky line between being a likable figure, sometimes dubbed the funniest man in the EPL, and a cliche. Dyche walks it successfully.

"Many moons ago when I was a player, they called it having 'characters' in the game," Dyche said. "Now the industry and the world somewhat tries to shape people a bit too much, and the professional side of it changes the reality of this word 'character.' People think there are certain things you should say and how you should say them. But now and again, a bit of fun is needed."

The relationship between the British media and its leading soccer clubs used to be intertwined. Media members would travel on the same plane as the national team to overseas games. Players and managers would eat – and more often drink – with reporters. Not so now.

Circulation wars of the 1980s sparked the pressure for outrageous headlines, and stories spun to their most provocative interpretation. It damaged the standing relationship, possibly beyond repair.

Yet Dyche is a throwback of sorts. He understands how a positive media presence can help Burnley get a little more focus in a soccer landscape dominated by a small core of elite clubs, such as Manchester United and Manchester City, both situated less than 30 miles away.

There are boundaries, however. He gets annoyed if his meanings are taken out of context or if jokey quips become tomorrow’s headline. He’s warned the press that if it happens too often, he’ll clam up and give the monosyllabic, non-answers many of the top bosses in the league resort to.

"Before it starts, he leans back in his chair and maybe makes fun of someone in the room that he knows," Evans told me. "It just lightens the tone. Sometimes he’ll stick around chatting to the press about movies or music or whatever for 20 minutes afterward.

"These days it is very rare in football where you can have that kind of personal chat and banter."

Dyche does indeed like a "natter," and our talk spanned topics such as Doors icon Jim Morrison, self-help books and Béné n Hot, a popular French liqueur that Burnley fans drink – topped up with boiled water – at halftime.

As a central defender, Dyche had a playing career of nearly two decades just below EPL level, and his personality fits well with Burnley, a working-class town that has managed to stay true to its roots while embracing modern corporate realities. The organization was locally owned until recently, when American investment group Velocity Sports Partners bought in.

The team is often listed as a favorite for relegation, but its most recent finishes were seventh, 15th and 10th. Dyche has that underdog vibe, too, which maybe spawns kinder handling from the media, but how he keeps things entertaining surely plays its part, too.

"With me and Burnley, the treatment has been pretty fair," he added. "They know it is a big challenge for us. You just hope for a balanced view.

"A while ago, the media and the profession went out of kilter. Nowadays, it would be highly unlikely for managers and the press to be eating or drinking together. I have a respect for the media, they too for me, although it's been stretched a few times.

"If I have shown honesty and humor, they usually respond the right way. I know there's great pressure on them. We are in the clickbait era."

The aggressiveness of the English tabloids is not always accurately portrayed, especially by Hollywood, but it’s true the coverage skews more toward controversy than analysis compared to here.

That might be why so many EPL managers offer little interest or insight when they speak publicly. Dyche takes the opposite tack but admits his patience can wear thin if the issues being discussed get repetitively dull.

"The most boring [questions] are stuff they know I’m going to answer," he said. "I don't talk about [signing] other people’s players. Then there are the fillers, trying to put words in your mouth. 'Would you say …?’ No, I wouldn't say. I'm not at my first rodeo.

"Good questions have more depth, reasoning and thought. They’re looking for a deeper understanding of what you do, your culture, environment and key core values, a bit more meat on the bone."

Dyche talks quickly and enthusiastically, traits of a man who cares about what he is doing but understands that ultimately, it’s sports and must therefore be kept in perspective. He, for the record, is most often compared to Simply Red singer Mick Hucknall when it’s time for lookie-likies. He’s good company over Zoom — and probably even better in the pub.

Our conversation continued, too much to regale all of it, but he’ll probably say some of it again sooner or later.

Because Sean Dyche likes talking, and it’s worth listening, too.

The Best is Yet to Come for Cesaro
WWE Superstar Cesaro goes 1-on-1 with Ryan Satin to chat about his recent momentum and passionate Talking Smack promo.
1 hour ago

Time for a new logo?
Kyrie Irving believes that the NBA logo should be changed to an image of Kobe Bryant. Is there merit to that argument?
1 hour ago

Buying The Hype?
Will Zion Williamson live up to the hype and be a future MVP? The "Undisputed" crew debates the young phenom's trajectory.
4 hours ago

Gus Johnson wins Jake Wade Award
FOX Sports announcer Gus Johnson is the winner of a prestigious award for "outstanding contributions" in the media to college sports.
6 hours ago
those were the latest stories
Want to see more?
View All Stories
Fox Sports™ and © 2021 Fox Media LLC and Fox Sports Interactive Media, LLC. All rights reserved. Use of this website (including any and all parts and components) constitutes your acceptance of these Terms of Use and Updated Privacy Policy. Advertising Choices. Do Not Sell my Personal Info