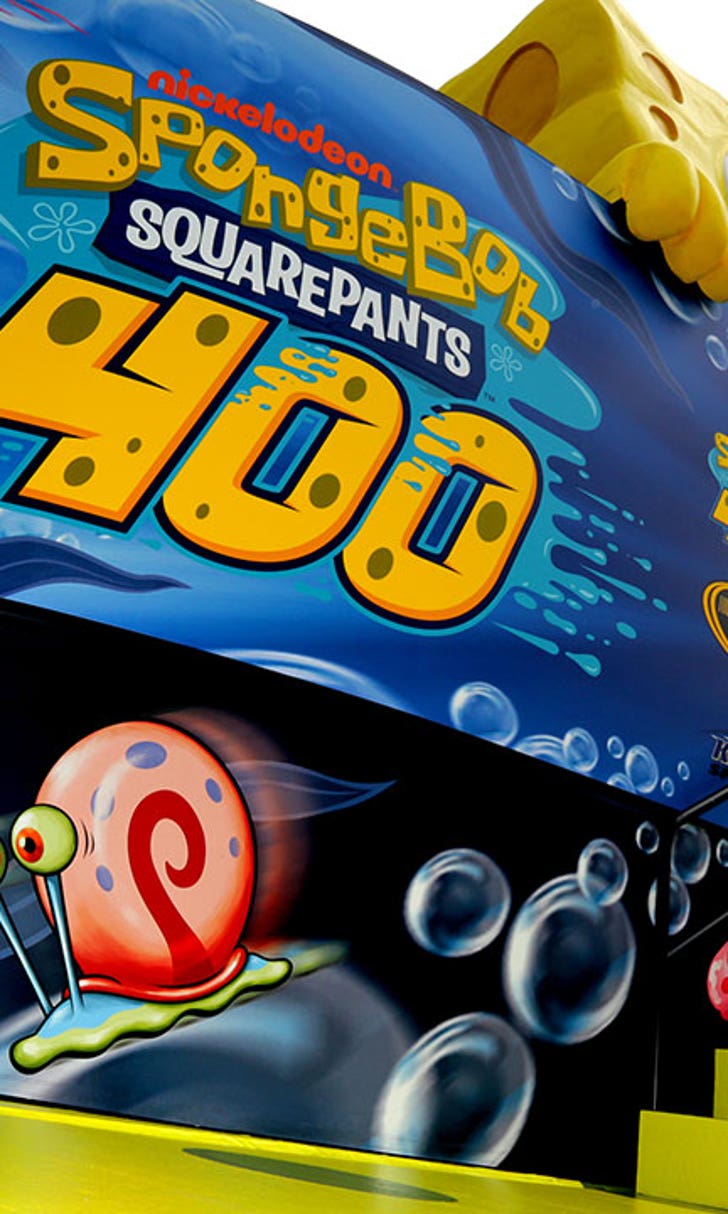 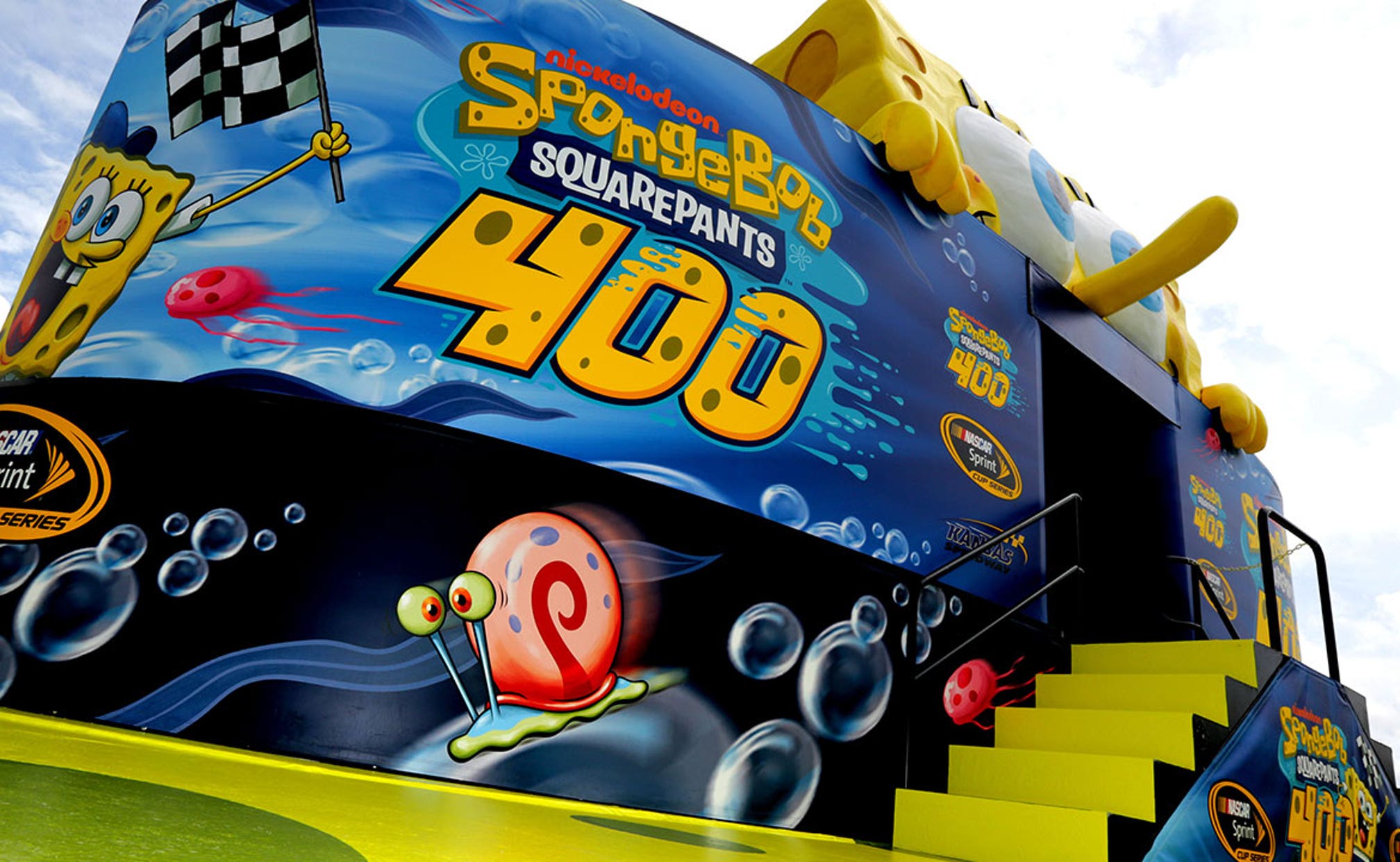 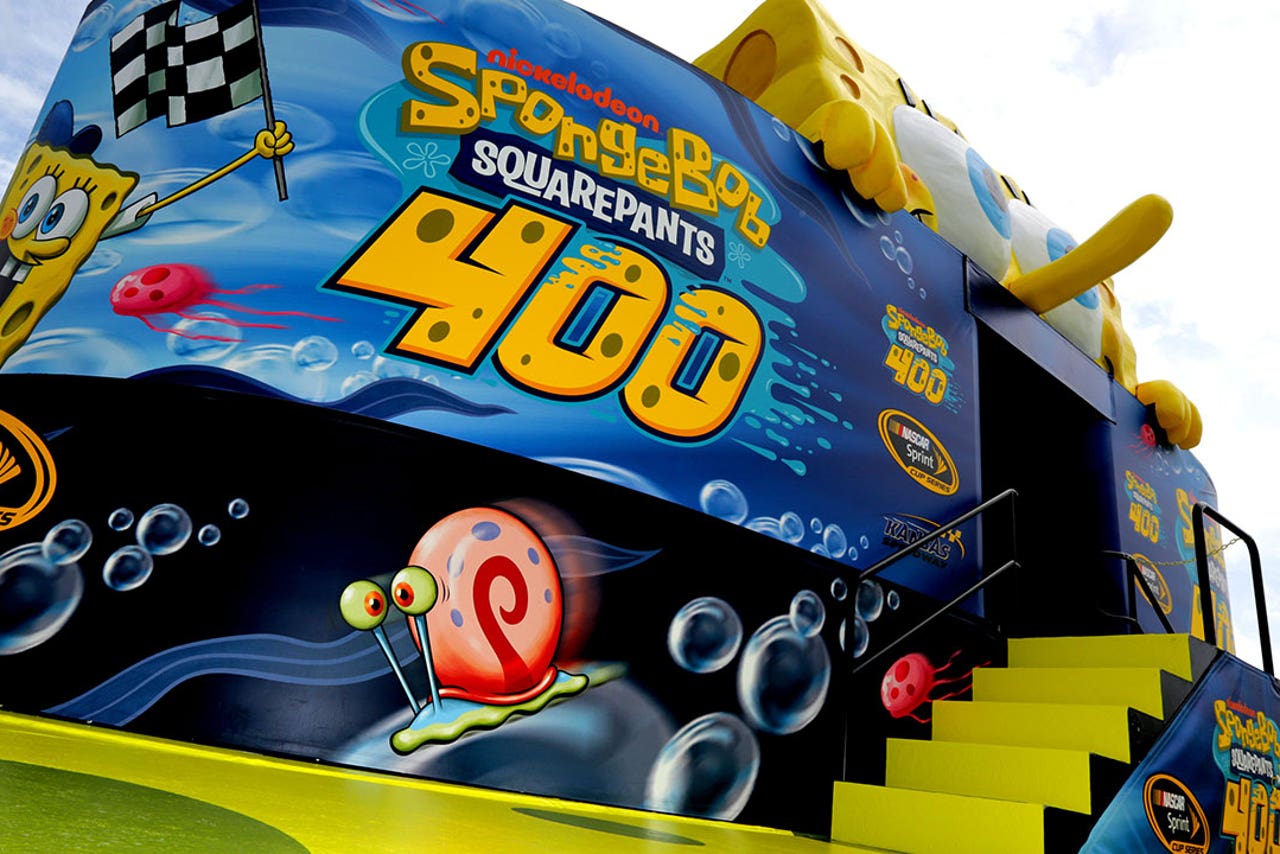 Editor's note: Scroll down for updates...

Who lives in a pineapple under the sea? SpongeBob SquarePants!

The cartoon character and his friends have made their way to Kansas Speedway for Saturday night's NASCAR Sprint Cup Series race.

David Ragan, Greg Biffle, Ty Dillon, Michael McDowell and Casey Mears all have SpongeBob characters on their cars for Saturday night's race, and each driver hung out in the kid zone outside the speedway.

If you're not at the @NickSportsTV Kids Zone at @kansasspeedway you're doing it wrong. #SB400 pic.twitter.com/mU5UQ3sMKE

Signing some autographs in the Nick Kidzone pic.twitter.com/sC0YI3vBOK

It looks like @CJMearsGang and @SpongeBob are both hoping for beach weather during the #SB400 at @kansasspeedway pic.twitter.com/LxFEKJJbxq

The voice of Squidward met #CaseyMears who's gonna be driving the Squidward car at the #SB400! pic.twitter.com/ZNMaGKcSKa

Each of the four Hendrick Motorsports cars are carrying memorial stickers remembering longtime employee Wayne Stemler, who recently passed away from cancer.

All four cars will honor longtime teammate Wayne Stemler, who passed away after a courageous battle with cancer. pic.twitter.com/hYtLY9Hj8R

Like most weekends, many drivers spent the day hanging out with sponsor and hospitality guests.

The afternoon is busy for @joeylogano. Signing for kids at the @nascar #AccelerationNation display pic.twitter.com/LYCHEYqV69

One of the hometown favorites, Clint Bowyer, brought out a big crowd for his Toyota appearance out in the fan zone.

Richard Petty Motorsports driver Sam Hornish Jr. took time out of his morning to attend the track's tweet-up, along with FOX NASCAR's own Tom Jensen.

While the drivers were busy making sponsor and hospitality appearances, the teams were hard at work in the garage and along pit road getting ready for 400 miles of racing at Kansas Speedway.

The top of the @LowesRacing pit box is starting to come together. ?? pic.twitter.com/lAF3CHCRhb

The No. 88 team is hard at work getting the pit box set up for tonight's race at @kansasspeedway #NW88JR pic.twitter.com/0F9qSwQ3I3

? time while the No. 88 is in the inspection line. #NW88JR pic.twitter.com/KrmtSRF2zI

Squidward is making his way through tech @kansasspeedway #sb400 pic.twitter.com/MeZ5rMq1yL

Weather has been a concern, things are looking up for Saturday night's race.

Weather has been suspect for today's race @kansasspeedway. I think we get the show in. Air Titans could get some work at times.

With weather quickly approaching the track, driver introductions got underway on the frontstrech.

Just a few drivers getting ready to head on stage for driver intros! #SB400 #NASCAR pic.twitter.com/TYrtv2d4A2

It may be #NASCARwithMom weekend but the kiddos still love coming to work with Dad! -MM pic.twitter.com/siDWwp5ZUP

SpongeBob and his friends continue to be a big hit around the speedway.

These two are ready for some #NASCAR racing ???? pic.twitter.com/ARtrhlqbXz

You know. Just hanging out here @kansasspeedway on this beautiful #SB400 night! pic.twitter.com/3DfjUgs7XR

Looks like @Patrick_Star is ready to get this race going! #CheezIt pic.twitter.com/l5P5Y2LoPN

Pivotal Pivot
John Hunter Nemechek has a plan. And it involves taking a few steps back in order to take one forward, writes Bob Pockrass.
5 days ago