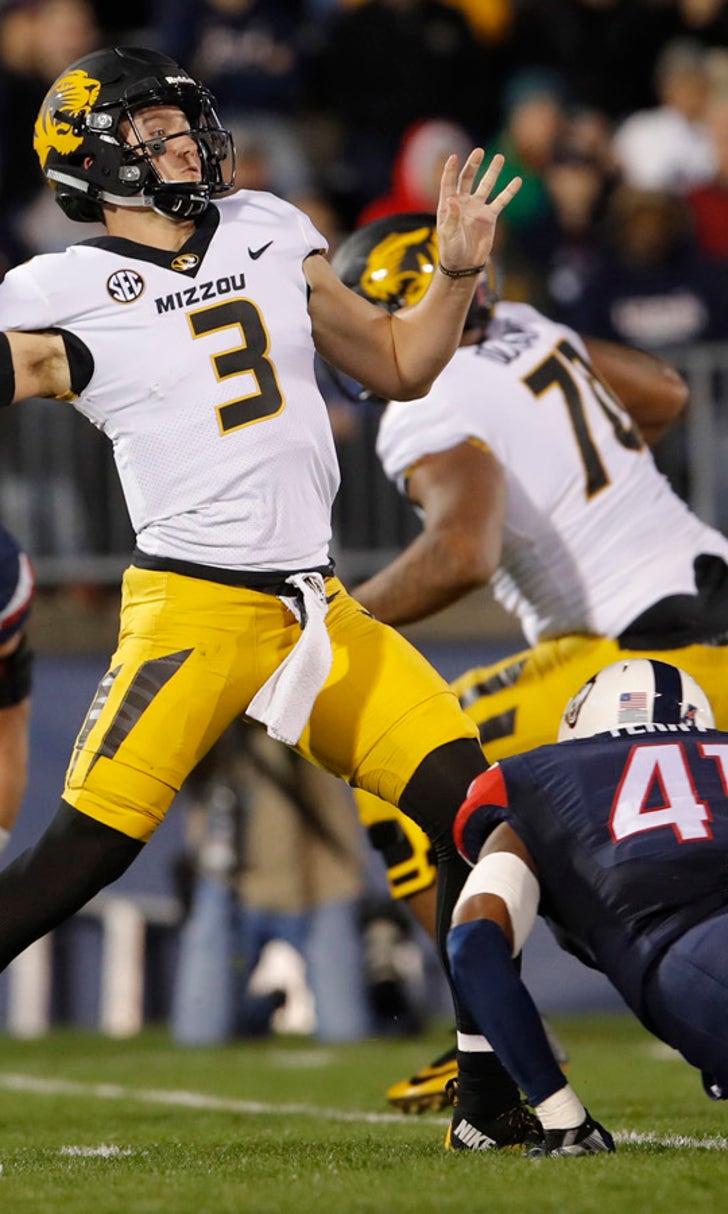 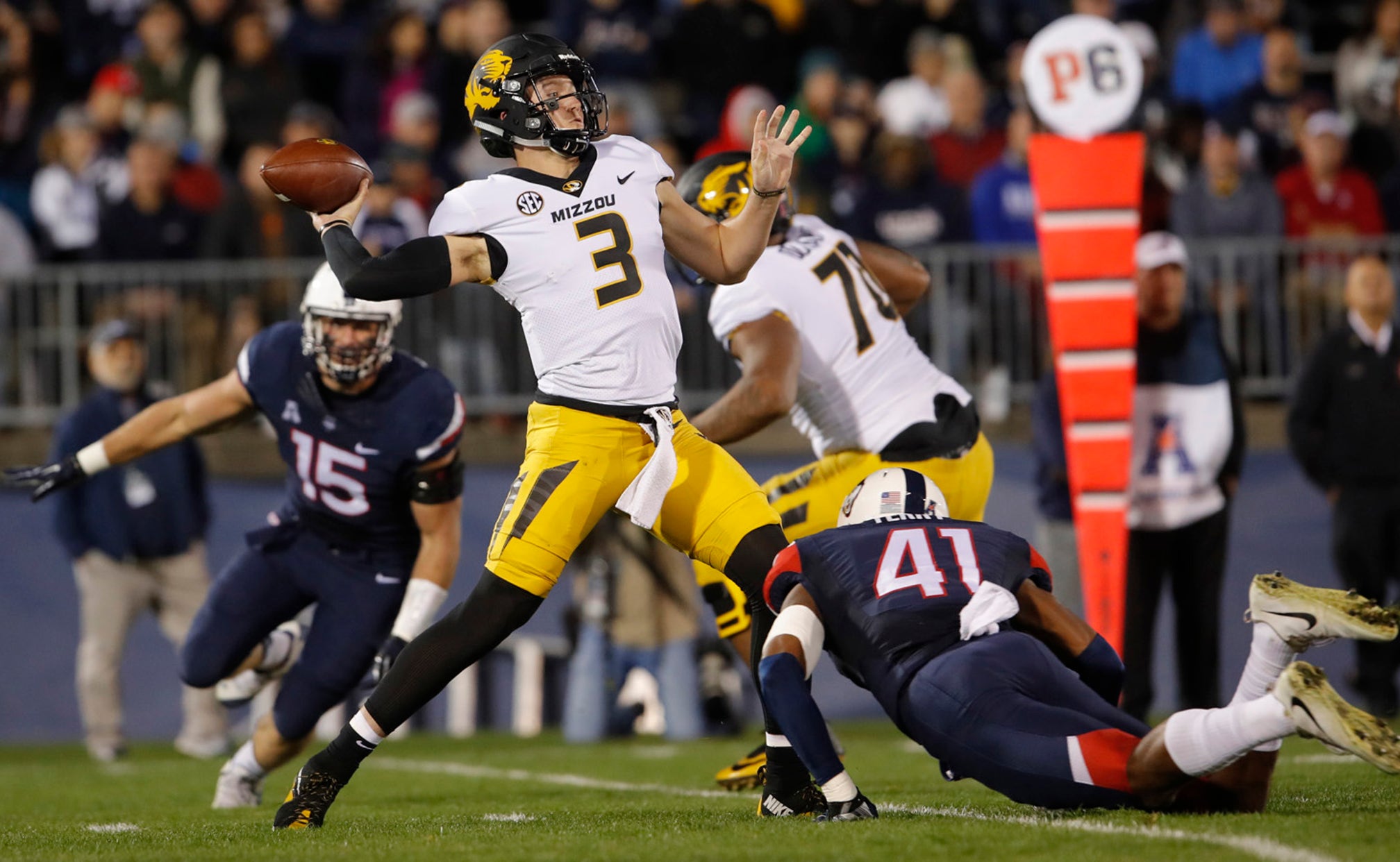 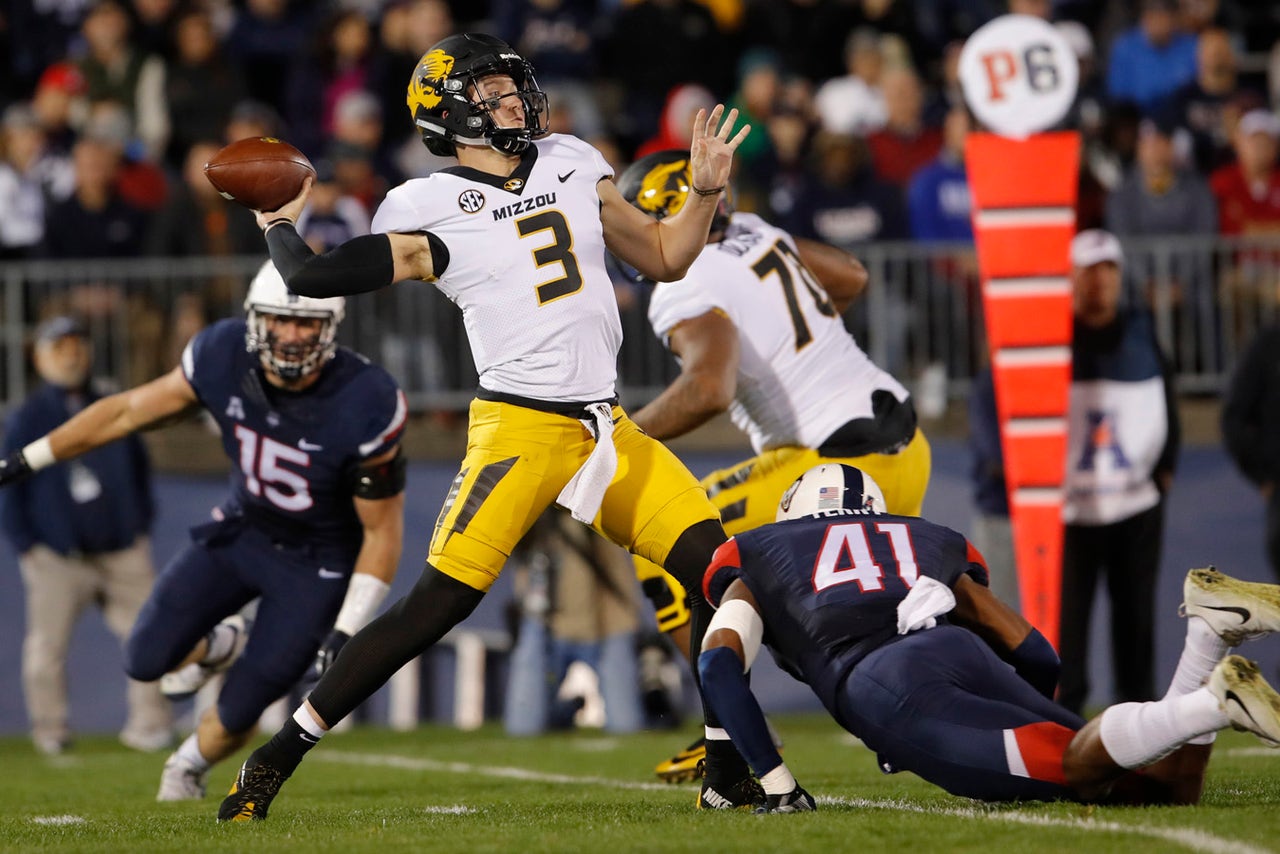 STORRS, Conn. -- Missouri earned its first road win and is on its first winning streak in more than two years. That has the Tigers thinking about bigger things.

Quarterback Drew Lock threw for 377 yards and five touchdowns to lead the Tigers in a rout of Connecticut, 52-12 on Saturday night.

The junior, who played just under three quarters, picked apart the nation's worst pass defense, finishing with a career-high 31 completions on 37 attempts.

"We're talking about our outside guys being able to run by anybody," Lock said. "And then being able to take the hitches all night made my job a lot easier, because you get six or seven on those, miss a tackle and you get a first down on those as well. That just allowed us to get in our shots a little more."

Missouri (3-5) gave up a safety after an errant snap on the opening drive, but scored on its next five possessions to lead 31-5 at halftime.

Lock completed 14 of 15 passes in the first quarter, three of them for touchdowns, including two to freshman tight end Albert Okwuegbunam.

He also hit J'Mon Moore for two scores and hooked up with Johnathon Johnson for a 72-yard catch and run in the third quarter.

Johnson had five catches for 128 yards. Moore caught eight balls for 96 yards. Witter ran for 73 yards in place of Damarea Crockett, who had what could be season-ending surgery on his right shoulder last week after suffering an injury in the Tigers' Oct. 14 loss to Georgia.

"I think when the offense is going that spreads throughout the entire team and sideline," said head coach Barry Odom. "(Drew)'s got a really high skill set and receivers are catching the ball well."

Bryant Shirreffs completed 19 of 39 passes for 202 yards for UConn (3-5), but was sacked five times. The Tigers also had nine tackles for loss.

"We're not going to show this film to these guys," UConn coach Randy Edsall said. "We're going to move forward and just make sure we have the right guys out there."

"That's really cool to me, growing up a huge Missouri Tiger fan, watching all those guys," Lock said. "Putting my name with those guys, that's the biggest part, 'cause that's the coolest thing to me."

Over his last five games, Lock is 114-for-166 passing for 1,668 yards. He has thrown for 20 touchdowns and just three interceptions.

UConn: The Huskies were coming off back-to-back wins over Temple and Tulsa, but have not won three in a row since 2015. UConn has now given up more than 350 yards passing to six of its eight opponents.

The Tigers, who beat Idaho 68-21 last Saturday, had not won two straight since beating Southeast Missouri and Arkansas State to start the 2015 season. The win at Arkansas State also was the team's last road win.

UConn safety Jamar Summers intercepted Missouri backup Micah Wilson near the end of the third quarter, but was then flagged for taunting with his team down 45-12 and found himself in the locker room for the rest of the game.

"I sent him off," said Edsall. "Not going to disrespect the game that way and play in this program."

UConn: The Huskies begin the toughest stretch of their schedule by hosting No. 17 South Florida next week in a game rescheduled from September because of Hurricane Irma. The Bulls are coming off their first loss of the season. The Huskies then travel to the sunshine state to face No. 18 UCF.