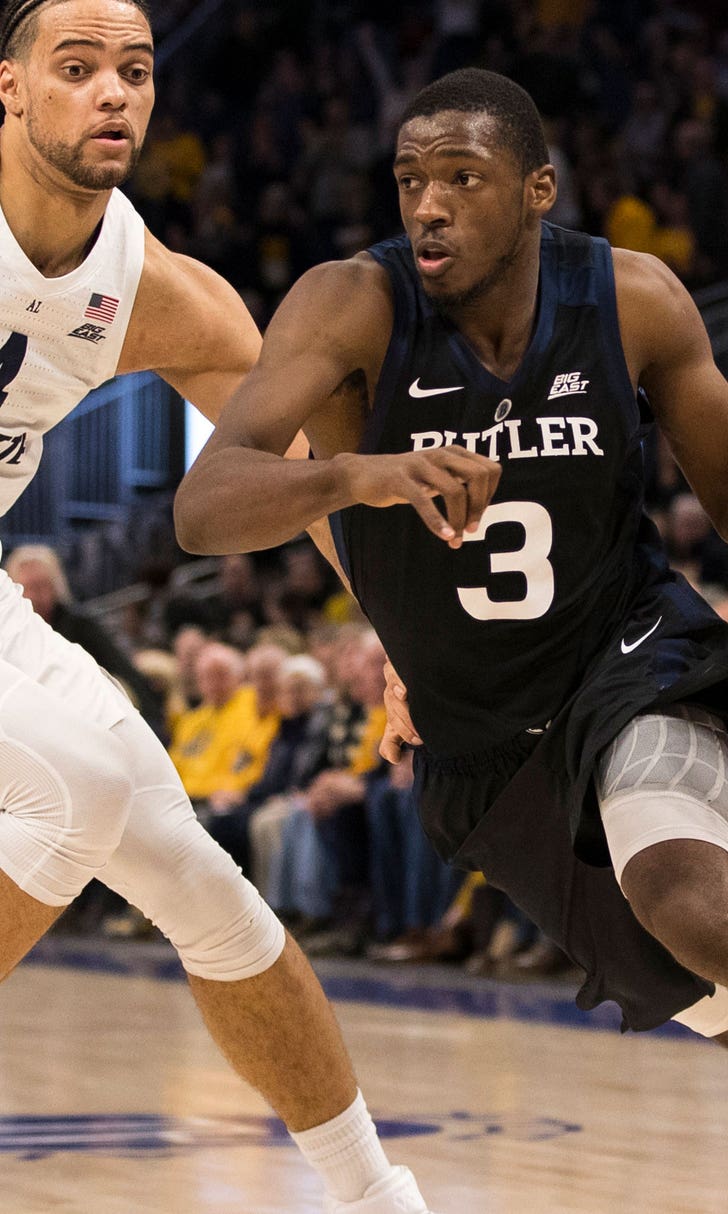 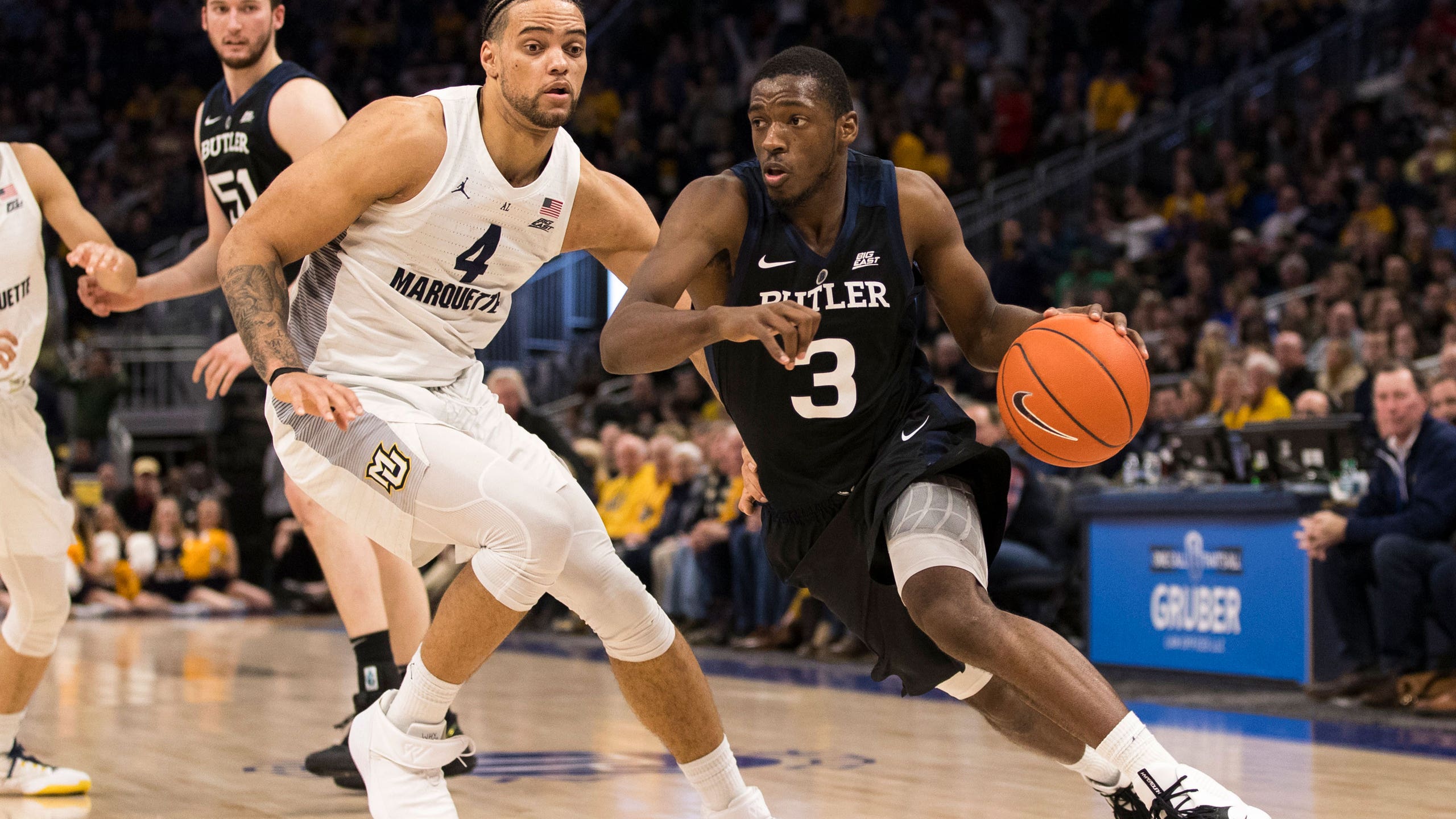 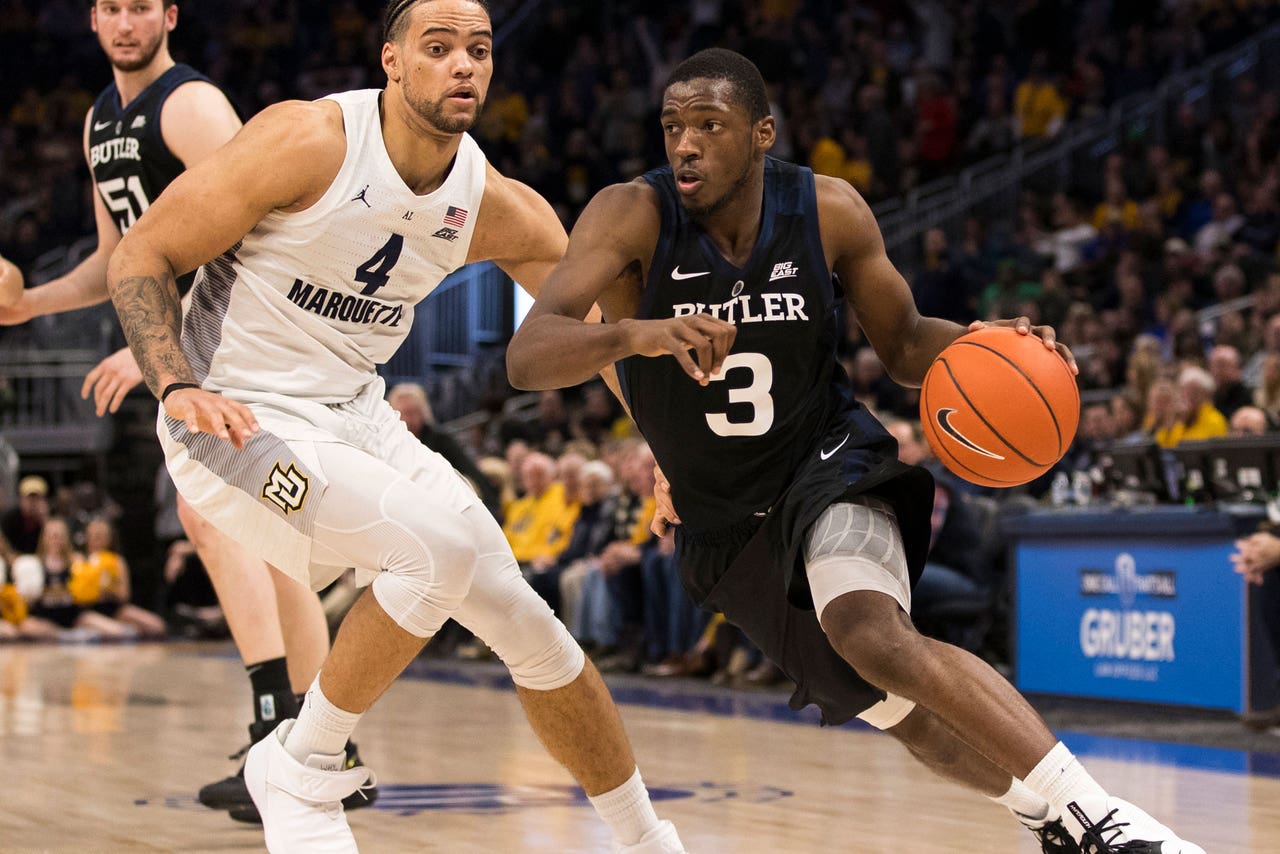 MILWAUKEE — Theo John made Butler pay the price for focusing on Markus Howard.

Howard scored 28 points and John added 15 points and matched his career-high with 11 rebounds as No. 11 Marquette pulled away in the second half for a 79-69 victory over Butler on Wednesday night.

With No. 17 Villanova's 85-73 loss at Georgetown on Wednesday, the Golden Eagles moved into the Big East lead a half-game ahead of the Wildcats.

Howard, the Big East's leading scorer, made 9 of 20 shots, including 6 of 13 from beyond the arc.

"They have a lot of guys who can make them, and you've got a lot of attention on Howard, which is tough," Butler coach LaVall Jordan said. "We executed well in the first half and then not as well in the second."

John, a 6-9 sophomore forward known for his defense, made 6 of 7 shots and 3 of 4 free throws. John, the Big East's leading shot blocker, also had three blocks to go along with his fourth double-double of the season.

"Most of the time when we have elite scorers on our team, I don't have to bring it up," John said of his offense. "But if the game brings it to me, I'm going to try and contribute at much as I can."

Baldwin hit two free throws to put Butler in front 44-43 with 12:45 remaining, but the Golden Eagles ran off 11 consecutive points, pushing the lead to 54-44 on John's rebound dunk.

Jordan Tucker ended Butler's scoring drought of almost 5 ½ minutes with a 3-pointer. On the ensuing possession, Howard was fouled on a 3 and converted the four-point play to make it 58-47 with 6:48 remaining.

Marquette was playing for the first time in eight days, but John said the layoff was not a factor in the slow start.

"I'd say it was just concentration, a lack of focus," he said. "We came out kind of slow, and Butler came ready to play. They punched us in the mouth and we just came back and kind of gathered ourself, and we responded."

Butler scored the first seven points of the second half to go up 37-29, but Marquette answered with eight consecutive points, pulling even at 37 on John's lay-in.

"The second half, they made an adjustment or two and countered," Jordan said. "Give them credit. And then we had to adjust, but they got a rhythm going in that second half that we didn't allow them to get in the first."

Butler: The Bulldogs entered Wednesday in a six-team logjam in the middle of the conference, one game behind St. John's and Seton Hall in the win column, and a game ahead of Georgetown, DePaul and Xavier.

Marquette: The Golden Eagles have five regular-season games against teams they already have beaten. But, except for a 79-68 home victory over Providence, the other four games were all decided by four points or less.

Howard pushed his career scoring total to 1,772 points, moving past Dominic James (1,749) into fourth on the Marquette all-time scoring list. Howard, a 5-11 junior guard, now is just one point behind George Thompson, who played from 1966-69. Jerel McNeal is Marquette's career scoring leader with 1,985 points.

Marquette is at Providence on Saturday.

$1 Million Shot
With one clutch 3-pointer, 38-year-old Travis Diener made himself and his TBT teammates quite a bit richer.
July 15, 2020
those were the latest stories
Want to see more?
View All Stories
Fox Sports™ and © 2021 Fox Media LLC and Fox Sports Interactive Media, LLC. All rights reserved. Use of this website (including any and all parts and components) constitutes your acceptance of these Terms of Use and Updated Privacy Policy. Advertising Choices. Do Not Sell my Personal Info