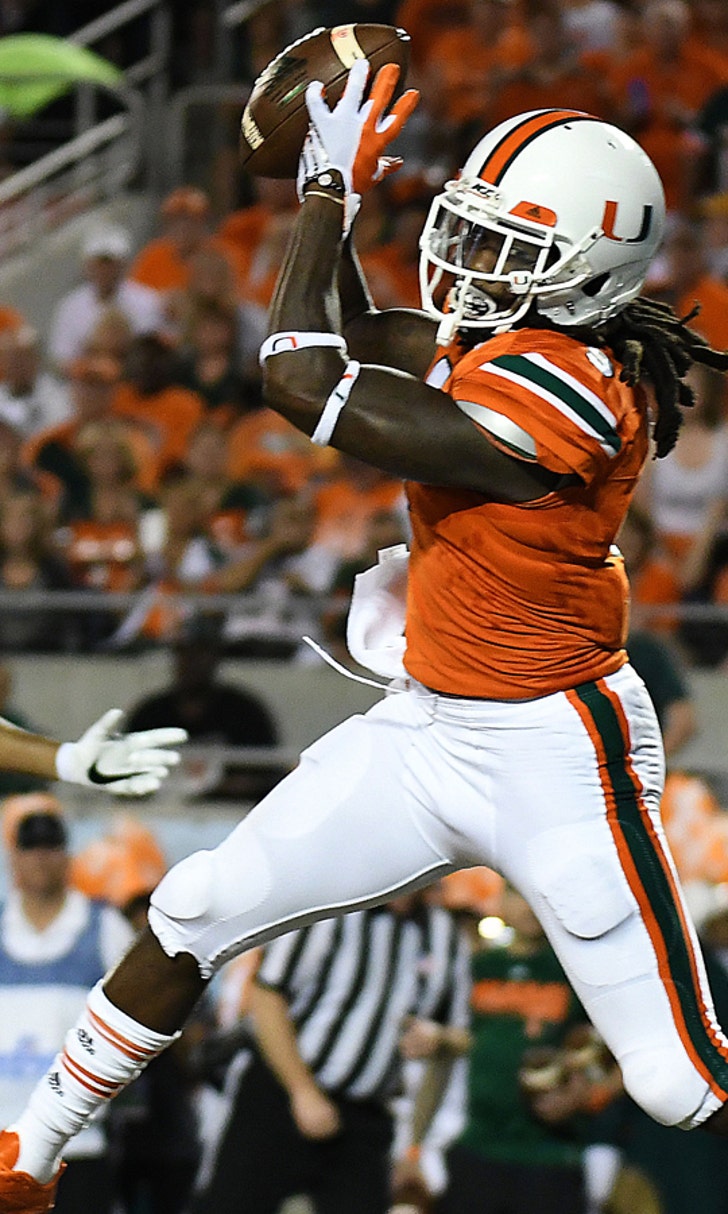 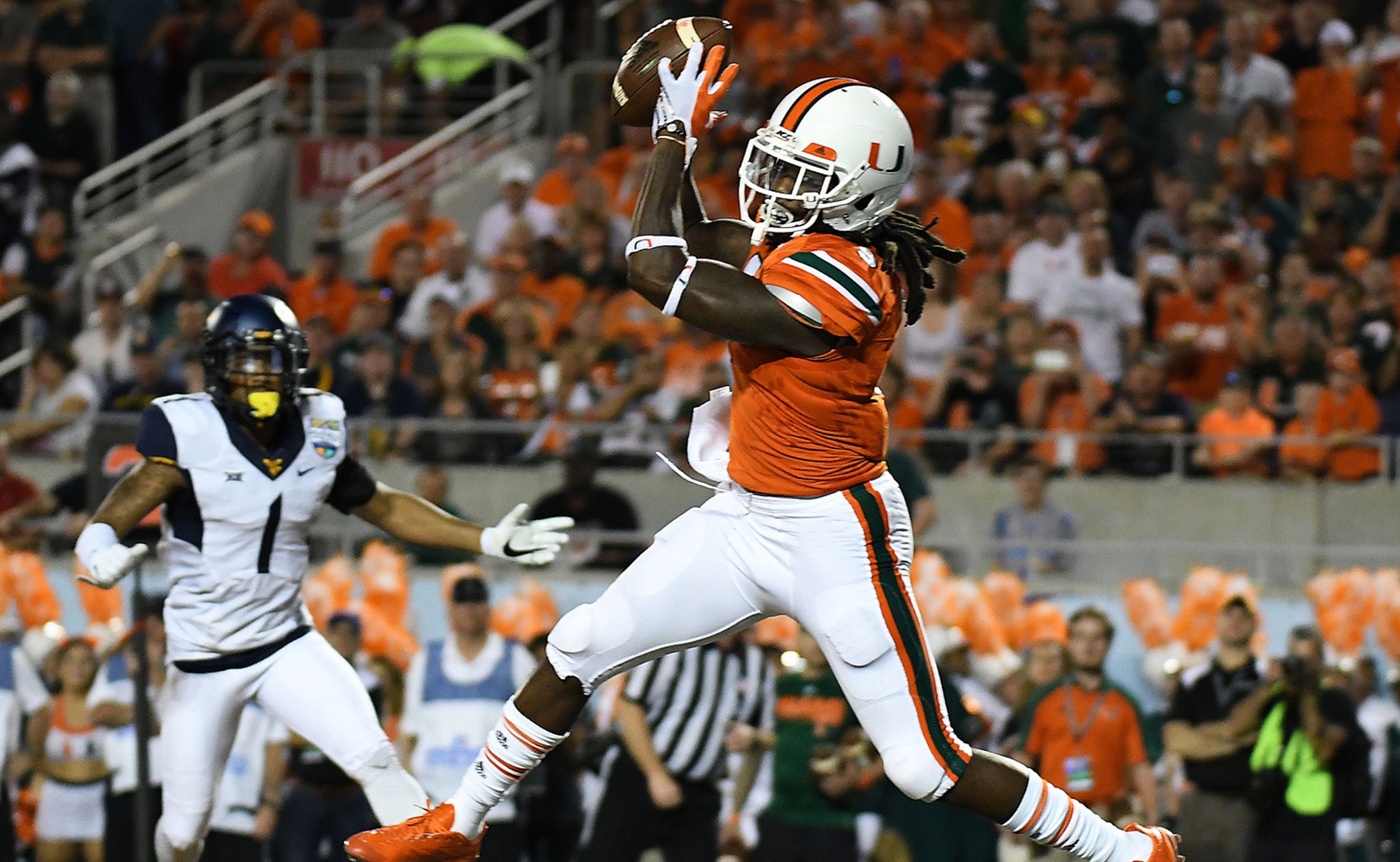 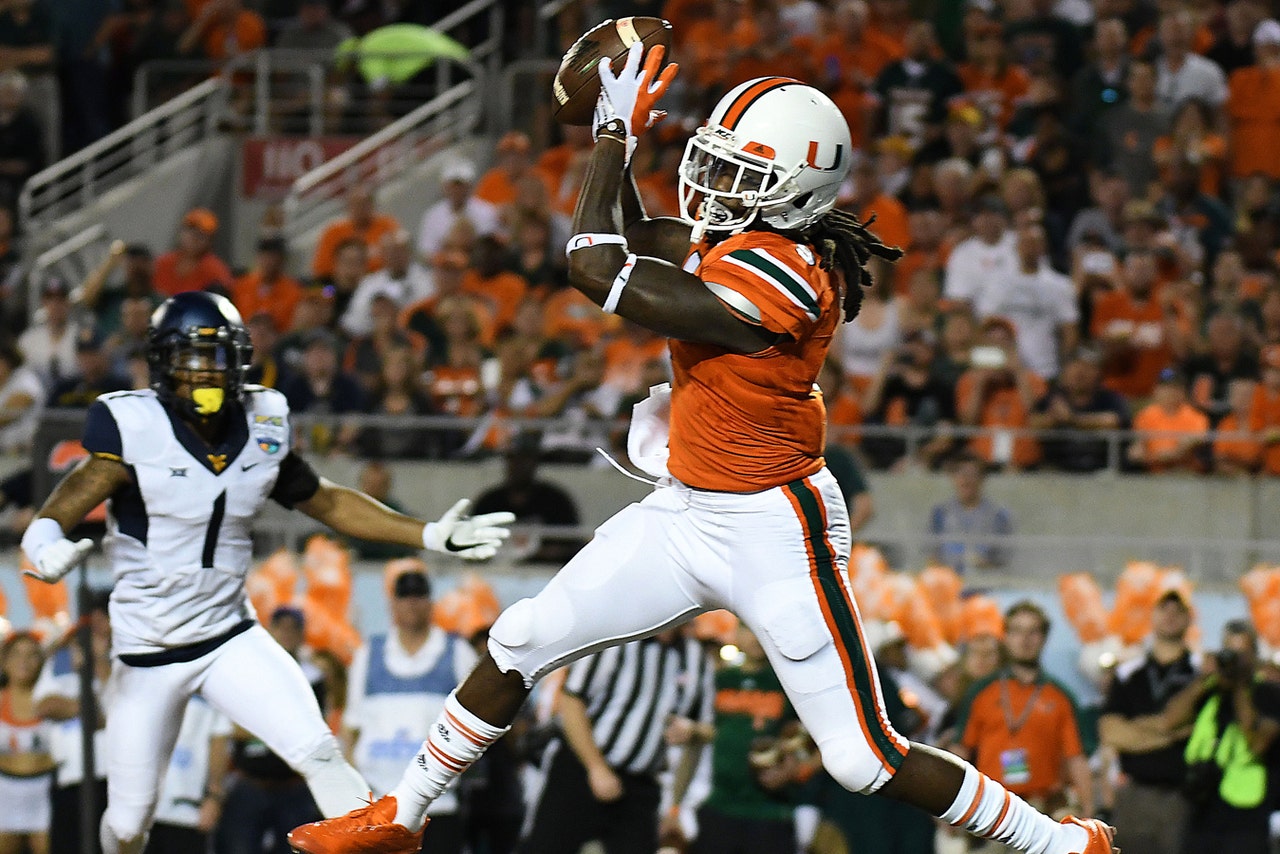 Miami Hurricanes wide receiver Malcolm Lewis (9) catches a touchdown pass against the West Virginia Mountaineers in the first half during the Russell Athletic Bowl.

Now they have another request.

"One more year! One more year!" they chanted at Kaaya on Wednesday night, after he threw four touchdown passes to help Miami top No. 14 West Virginia 31-14 in the Russell Athletic Bowl.

And it's easy to see why they're clamoring for the school's most prolific quarterback to return.

Kaaya completed 24 of 34 passes for 282 yards for Miami (9-4) -- and went 18 for 19 in one dazzling stretch, the lone incompletion in that span being a drop. The four TDs tied both a Miami bowl record and Kaaya's collegiate best.

"I've got some soul-searching to do," said Kaaya, who already was Miami's career leader in passing yards and took over the No. 1 spots in attempts and completions on Wednesday.

Skyler Howard passed for 134 yards and ran for a touchdown for West Virginia (10-3), which fell to 3-17 against Miami. Kennedy McKoy also had a touchdown run for the Mountaineers, who committed 11 penalties and allowed four sacks.

West Virginia came in averaging more than 500 yards per game. Miami held the Mountaineers to 229.

The Hurricanes had lost six straight bowl games, and punted on their first six possessions Wednesday. But Kaaya finally got rolling, and Miami soon had total control.

Kaaya connected with Ahmmon Richards, Malcolm Lewis and Braxton Berrios for touchdowns in the final 6:30 of the first half to get Miami rolling, and found David Njoku for another touchdown on the first possession of the second half.

"They were ready to play," Holgorsen said. "This meant a lot to them. ... Outcoached us, outplayed us on all three sides."

West Virginia: The Mountaineers fell short of tying a school record for wins in a season. There have been five teams in West Virginia's 125 years of football to win 11 games. ... West Virginia fell to 2-10 in bowl games played in Florida. ... It was the first time the Mountaineers and Hurricanes played since 2003, when both were in the Big East.

Miami: Freshman linebacker Michael Pinckney was ejected for targeting with 10:55 left in the third quarter, and per NCAA rule will have to sit out the first half of next season's opener. ... Not only did Miami punt on its first six possessions, but it went three-and-out on the first five of those.

Among the 109 teams that won bowl games since Miami's last postseason victory in 2006: The other Miami (Ohio), Old Dominion (which didn't even have football in 2006), and all six of the other FBS teams from the state of Florida -- Florida, Florida State, Central Florida, South Florida, Florida Atlantic and Florida International.

Lewis wrapped up his Miami career in a most memorable way. His TD catch in the second quarter was his first in a 35-game span for Miami, and was the third scoring grab of his career. The bowl game was Lewis' 50th and final game as a Hurricane, making him the 11th to play so many at Miami. His freshman season in 2012 ended after four games when he endured a badly broken ankle at Georgia Tech, so he was able to get a fifth year of eligibility.

West Virginia: The Mountaineers ended this season against an ACC opponent, and start next season with one. West Virginia plays Virginia Tech at FedExField on Sept. 2.

Miami: The Hurricanes' Week 1 opponent for next season hasn't been announced, one of many things to be sorted out in the coming weeks.

Miami (FL) Hurricanes
share story
those were the latest stories
Want to see more?
View All Stories
Fox Sports™ and © 2020 Fox Media LLC and Fox Sports Interactive Media, LLC. All rights reserved. Use of this website (including any and all parts and components) constitutes your acceptance of these Terms of Use and Updated Privacy Policy. Advertising Choices. Do Not Sell my Personal Info