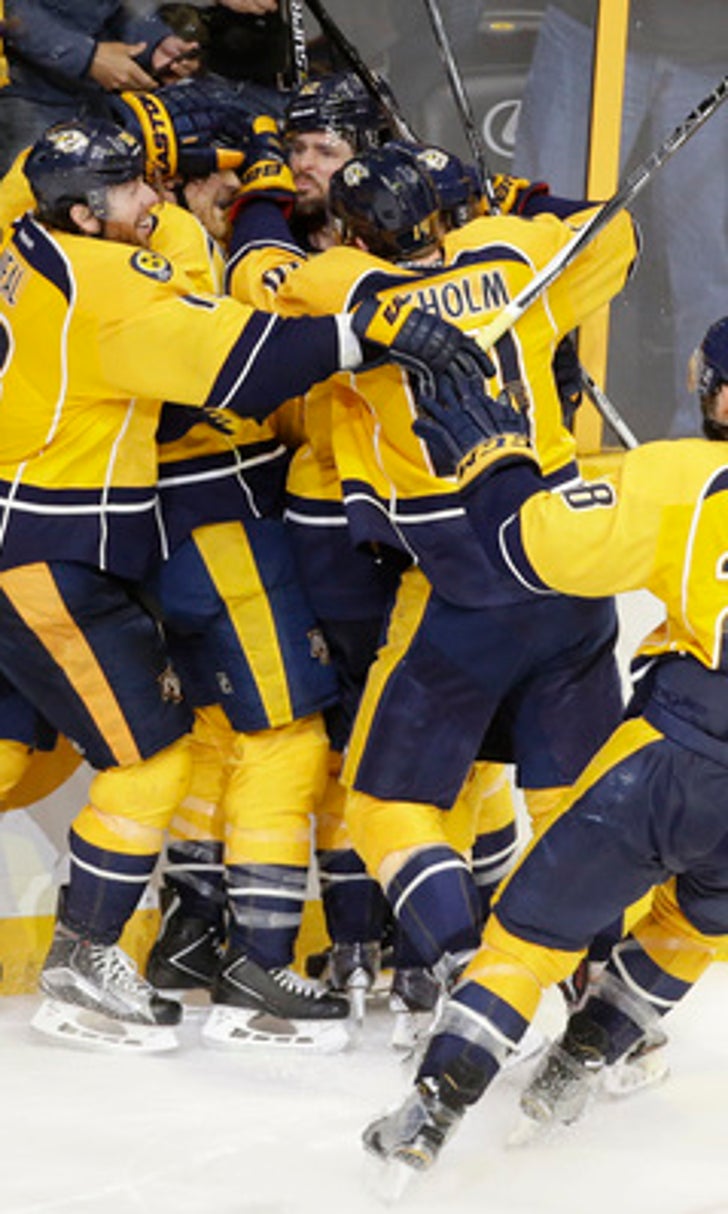 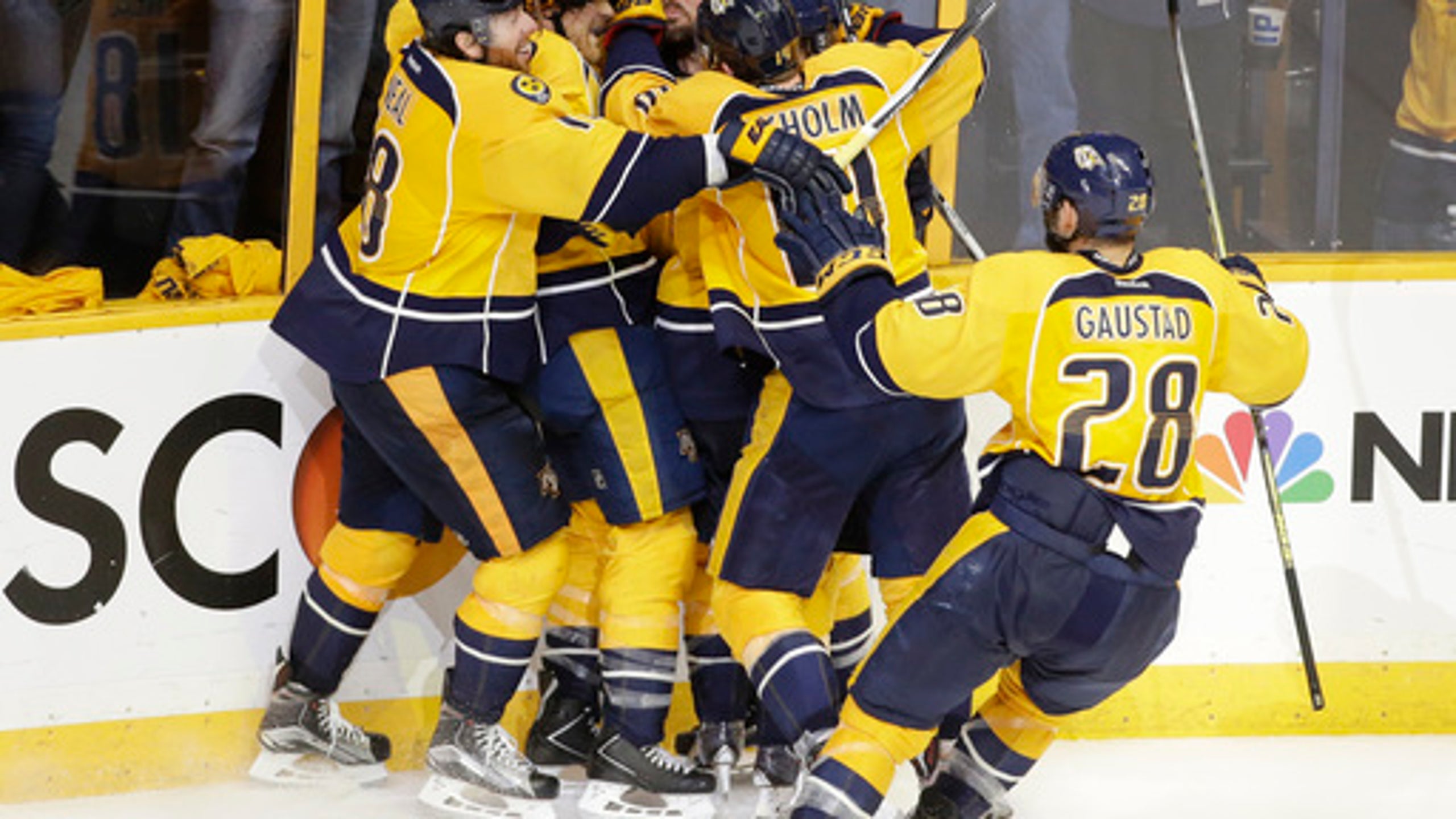 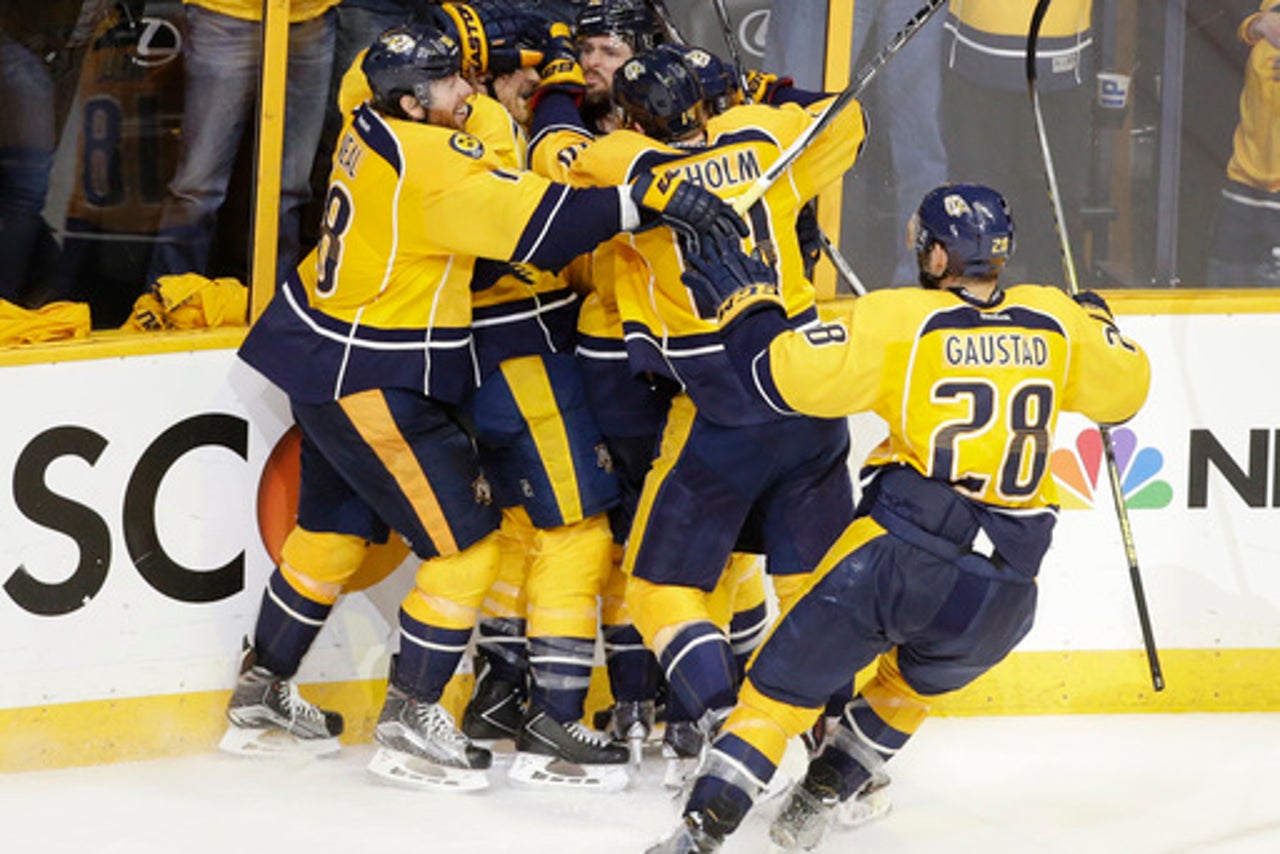 Fisher scored his second goal at 11:12 of the third overtime, and the Predators beat the San Jose Sharks 4-3 early Friday morning in the longest game in franchise history.

"It took a long time, but thanks we have Fish," Nashville goaltender Pekka Rinne said.

With the victory, the Predators won their first overtime game on home ice. More importantly, they tied this second-round, best-of-seven series at 2-2. The Sharks needed only five games in beating Nashville in the first round in both 2006 and 2007. Nashville coach Peter Laviolette, in his second season, said teams have a lot invested in a game that goes this deep.

"To win a game like that is big," Laviolette said. "To think about the other scenario, you're 3-1 the other way. This ties it up 2-2. It shortens the series. Our guys played like champs tonight."

James Neal scored with 4:21 left in the third period, tying it up at 3-3, and the teams went scoreless during the first two overtimes and headed to a third extra period — the first in the NHL playoffs this year.

The Predators killed off six penalties, including one shortly before Fisher's winning goal at 1:03 a.m. Rinne made 44 saves to give Fisher a chance at his second playoff overtime goal in Fisher's career and first since Game 6 with Ottawa in 2004.

This was the longest game for the Sharks since a four-overtime game in Dallas in 2008. Now the Sharks, the NHL's best road team during the regular season, have lost two straight away from San Jose for the first time since Dec. 18 and 20.

Game 5 is Saturday night in San Jose, about 44 hours after this game ended.

Sharks coach Pete DeBoer still was furious after the game over a goal Joe Pavelski scored at 7:34 of the first overtime period that could have ended it much earlier.

Pavelski grabbed the puck out of the air and then tapped the puck across the line at 7:34, but officials immediately ruled no goal for goaltender interference. They upheld that ruling after review for Pavelski crashing into Rinne and pinning him down before the puck crossed the line.

DeBoer said he was told Pavelski did get his stick on the puck before it crossed the line but officials waived it off for incidental contact.

"I don't understand," DeBoer said. "I guess incidental contact is you're cross-checked from behind while you are in the air and you have the opportunity to stop. I guess that's what it is. You know what, that rule has been clear as mud to every coach in the league all year, so why should it be different tonight."

Rinne said a goalie is nervous anytime they review a goal.

"It was called off on the ice, and I felt pretty comfortable that it's not going to be a goal," Rinne said. "Missed a bullet there, so that was nice."

Most of Nashville's fans stuck around for the finish and had just given the Predators a standing ovation a couple minutes before Fisher's game-winning goal gave them a reason to celebrate.

Sharks goalie Martin Jones, who made 41 saves himself including a great stop on a backhander off Colin Wilson's breakaway earlier in the period, was at the edge of the crease. Fisher scored into the net behind Jones and was so tired he almost forgot how he scored.

"That was a good play to get (Mattias) Ekholm free in the middle there," Fisher said. "He got a shot through, and I just kind of go in there and got the rebound and (got) it home."

Fisher started the scoring for Nashville at 9:50 of the first period. Colin Wilson also scored.

In the first overtime, each team had plenty of chances. Predators center Ryan Johansen hit the far post at 5:00, while the Sharks nearly scored twice before Pavelski's disallowed goal. Joel Ward couldn't convert on a wraparound try, while Rinne stopped the puck with his left leg after Sharks center Logan Couture skated up the slot.

Both teams had plenty of chances in the second overtime. Rinne kept them playing with save after save, including one off a point-blank try by Tomas Hertl late. Nashville captain Shea Weber, with 45 minutes, 16 seconds of ice time at that moment, went to the box with 2:03 left in the overtime period for high-sticking Sharks defenseman Paul Martin.

Nashville killed off the penalty, setting up the third extra period.