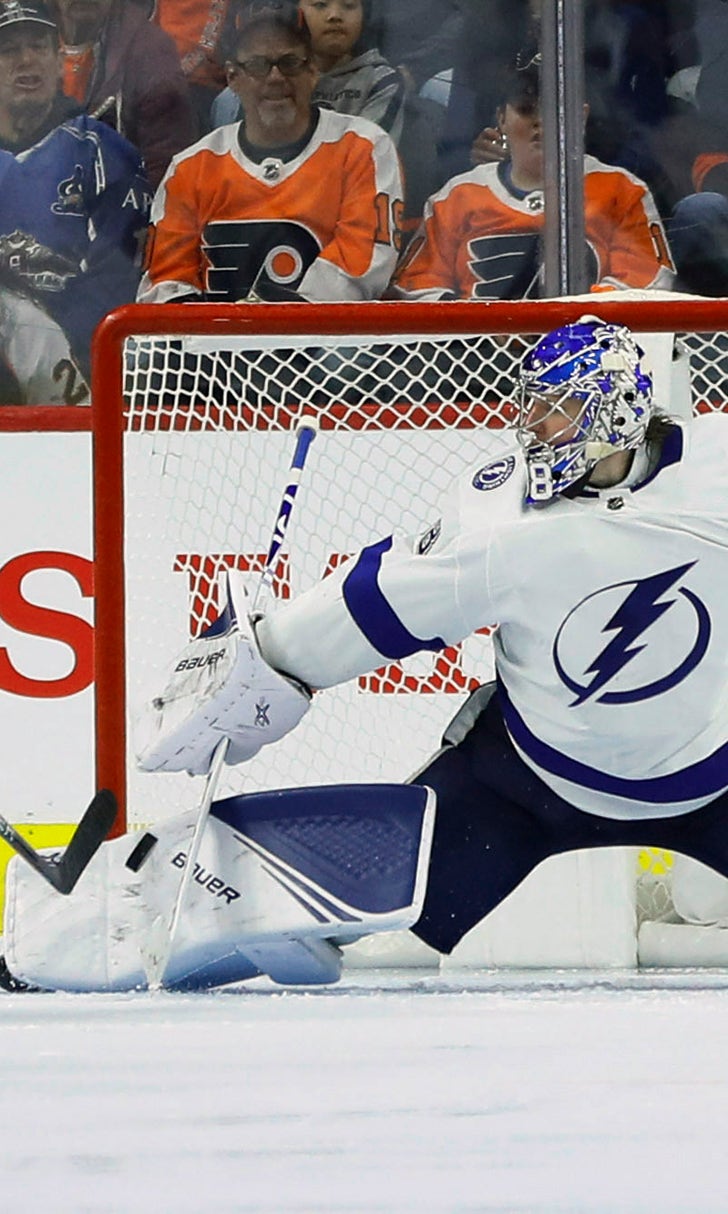 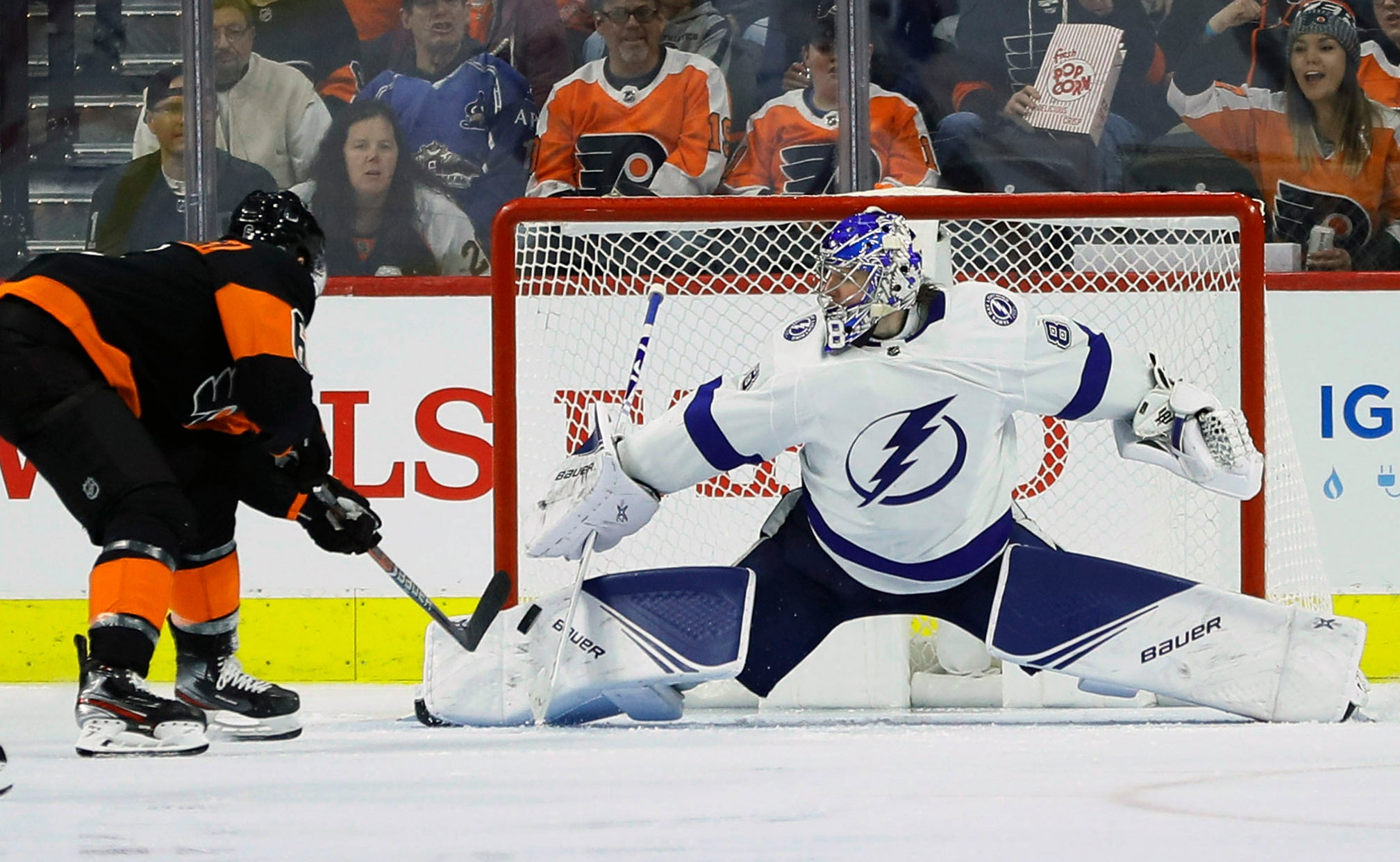 previous story
Bradley banks in game-winner to lift Cal past Washington
next story
No. 1 UConn women follow loss with blowout over Houston

PHILADELPHIA (AP) — Tampa Bay got offense from an unlikely source to keep its winning streak going.

Pat Maroon scored the game's only goal, Andrei Vasilevskiy made 23 saves and the Lightning tied a club record with their 10th straight win, 1-0 over the Philadelphia Flyers on Saturday night.

The Lightning haven’t lost since Dec. 21 at Washington, and have outscored opponents 43-17 during their streak. Tampa Bay has tallied 12 unanswered goals, two short of matching a team mark.

Tampa Bay will look to set a club record for consecutive victories on Sunday night at New Jersey.

“The guys you’re used to scoring score a lot for us (didn't score),” Lightning coach Jon Cooper said. “But when they don’t, you need other guys to step up. And that’s probably how you get to 10 in a row when everybody’s contributing.”

Maroon scored with 12:33 left in the second period on a fluky goal. Anthony Cirelli sent a high backhander into the zone from near center ice. Flyers defenseman Matt Niskanen batted it out of the air, but Maroon blocked the puck with two hands. It landed at his feet and he shot past Carter Hart’s glove side for his sixth of the season and first goal in 24 games.

“In a game like that, it’s funny that’s the goal that goes in,” Cooper said. “I think he was the only one that really saw that puck. Everybody else was looking for it. He went hard to the net and he jammed it in. Good awareness by him.”

Maroon later left the game after he was hooked by Kevin Hayes and went barreling into the back boards two minutes into the third period. He immediately grabbed his right shoulder and headed to the bench before going to the locker room.

Cooper didn’t have an update on Maroon, who was sporting an ice pack on his right shoulder afterward.

Vasileskiy earned his second straight shutout and the 20th of his career. He has been in goal for eight of the victories during the streak. The Lightning defense was stout in front of their netminder, and Vasileskiy was rarely tested. His best save came five minutes into the third period, when he stopped Travis Sanheim’s one-timer from close range with a right pad save.

“I've said this before, a shutout is something the whole team deserves,” Vasileskiy said. “The team played great defensively, all the D-men and forwards. Tonight, one goal was enough for us to win because we played good defensively.”

Steven Stamkos and Brayden Point have been on a roll during the streak, each with 14 points, and Nikita Kucherov, the team’s points leader, had points in six straight games. But their offense wasn’t needed on this night.

“Winning 10 in a row is special,” Yanni Gourde said. “Everybody is chipping in.”

The Flyers played a strong first period, killing off three penalties, including a four-minute double-minor for high sticking against the NHL’s second-best power-play unit. But Philadelphia didn’t generate any high quality chances in either of the first two periods against Tampa Bay.

There just wasn’t much room for them to operate.

“Every time we were dumping it in, or we chipped it in, they just turned around and made the play and then we had to back-check,” Philadelphia’s Jakub Voracek said. “They played really well. There is a reason why they are the hottest team in the league right now.”

NOTES: Tampa Bay LW Ondrej Palat (left leg) didn’t play after being hurt in the third period of Thursday’s 4-0 win over Arizona, and D Ryan McDonagh (head) missed his fourth consecutive contest. McDonagh won’t play Sunday at New Jersey and will be re-evaluated after that contest. … The Lightning are 4-3-1 in the first game of a back-to-back. … This was the first meeting between the clubs. They will meet twice more, on Feb. 15 and March 12 in Tampa Bay. … Philadelphia F Oskar Lindblom received a standing ovation when he was shown on the big screen in the first period. Lindblom is being treated for Ewing’s sarcoma, a form of bone cancer.