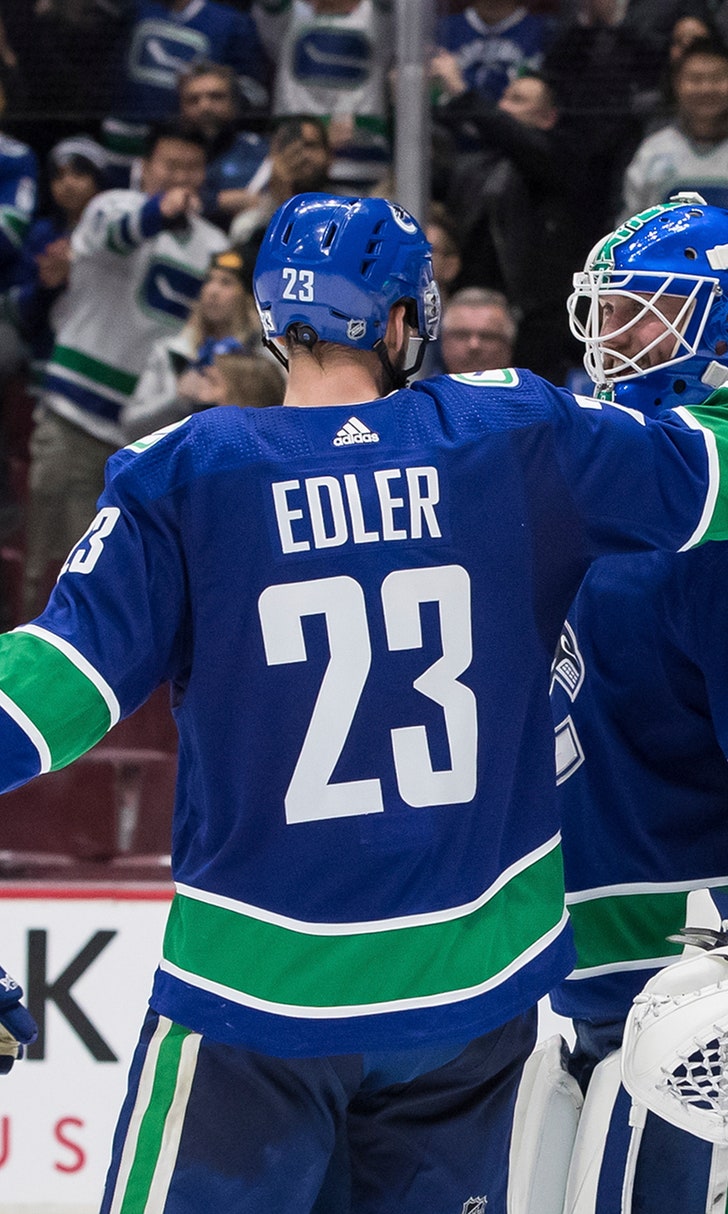 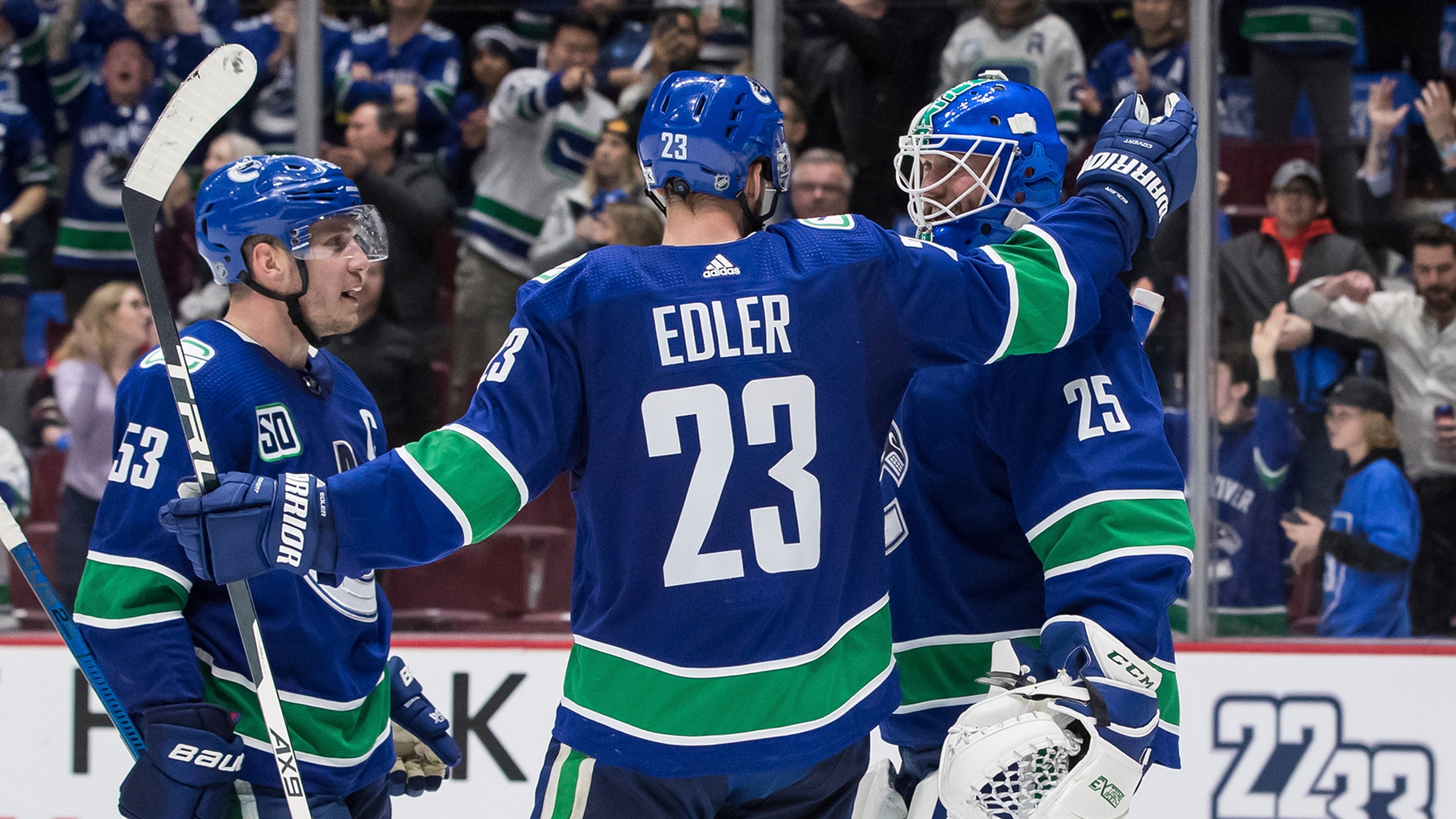 Brandon Sutter had a goal and two assists, and Bo Horvat and Adam Gaudette also scored to help the Canucks win their second straight after a four-game skid (0-3-1).

Markstrom got his second shutout of the season and fifth of his career.

The goalie said the win was extra special with the Sedins being celebrated.

"They are such great people," Markstrom said. "They are quiet guys and they don't really like to be in the center of the room. ... They really deserve it and earned every applause. Everything that was said about them was well deserved."

There was an electric atmosphere in the building for the retirement ceremony. The sold-out crowd was on its feet cheering as Henrik Sedin's No. 33 and Daniel Sedin’s No. 22 were raised to the rafters at Rogers Arena.

“To the people of Vancouver and British Columbia, we came here in 1999 and it felt like home from Day 1,” Henrik Sedin said. “We want to thank you. To play in front of you has truly been an honor.”

In their 17 years as Canucks the Sedins totaled 633 goals and 1,478 assists in 2,637 games. They are franchise leaders in seven major categories.

Joining the Sedins were their wives, children and parents. Also in attendance were past Canuck greats like Trevor Linden, Markus Naslund, Ryan Kessler, Alex Burrows, Roberto Luongo and Kevin Bieksa.

"You have all these alumni that meant a lot for this city," said Markstrom. "You want to play good in front of them for sure."

"Unfortunately, we couldn't find way to find the back of the net and open the game up a little bit, especially with the way we were playing," Blackhawks captain Jonathan Toews said. "Give their goaltender credit and their defenseman were good around the net clearing second chances. Maybe that's something we can do a little bit better, getting numbers at the net and finding ways to get those ugly goals."

Vancouver remains first in the Pacific Division with 69 points, three more than Edmonton and five ahead of Vegas.

The Blackhawk are six points back of Arizona for the final wild card in the Western Conference.

Vancouver was badly outplayed all night and needed some big saves from Markstrom to stay in the game. In the second period he stopped Patrick Kane’s shot from the high slot after a giveaway by Quinn Hughes. In the first he also got a pad on a shot from an open Dominik Kubalik.

"Sometimes your goalie has to come up clutch for you," Horvat said. "Marky was outstanding tonight. Without him it's a different story. We owe him a lot, a lot of times this year, and tonight was one of those times."

The Canucks led 1-0 after the first period despite being outshot 17-7. Horvat scored on a power play on a pretty three-way passing play with Sutter and J.T. Miller with 4 1/2 minutes left in the period.

The penalty came after Chicago asked for a review of a referee’s decision to disallow a Blackhawk goal due to goaltender interference. The call stood and the Blackhawks were assessed a penalty for delay of game.

Gaudette made it 2-0 at 6:26 of the second. After Antoine Roussel found him alone at the side of the net, Gaudette beat Crawford for his 10th of the season.

In the third period Gaudette threw a couple of big punches in a fight with Chicago’s Connor Murphy.

Sutter capped the scoring with an empty-netter with 2:09 left.

NOTES: Canucks F Brock Boeser missed his second game with an upper-body injury. ... Vancouver took two of three in the season series with the home team winning each game. ... The Canucks didn’t get a shot on net until 9:56 of the first period. ... The Blackhawks were wearing No. 22 and No. 33 stickers on their helmets to honor the Sedins.

Blackhawks: At Calgary on Saturday night before wrapping up a five-game trip at Winnipeg on Sunday.

Canucks: Host Anaheim on Sunday in the fourth game of a six-game homestand.

Vancouver Canucks
share story
those were the latest stories
Want to see more?
View All Stories
Fox Sports™ and © 2021 Fox Media LLC and Fox Sports Interactive Media, LLC. All rights reserved. Use of this website (including any and all parts and components) constitutes your acceptance of these Terms of Use and Updated Privacy Policy. Advertising Choices. Do Not Sell my Personal Info