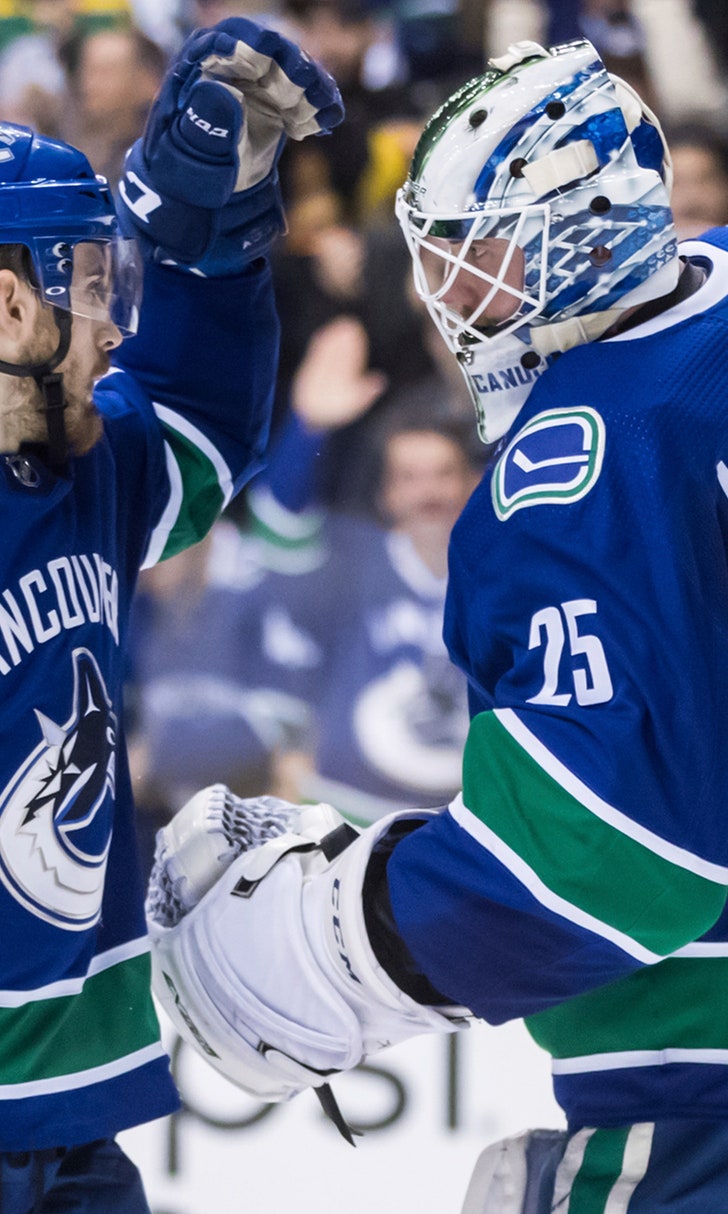 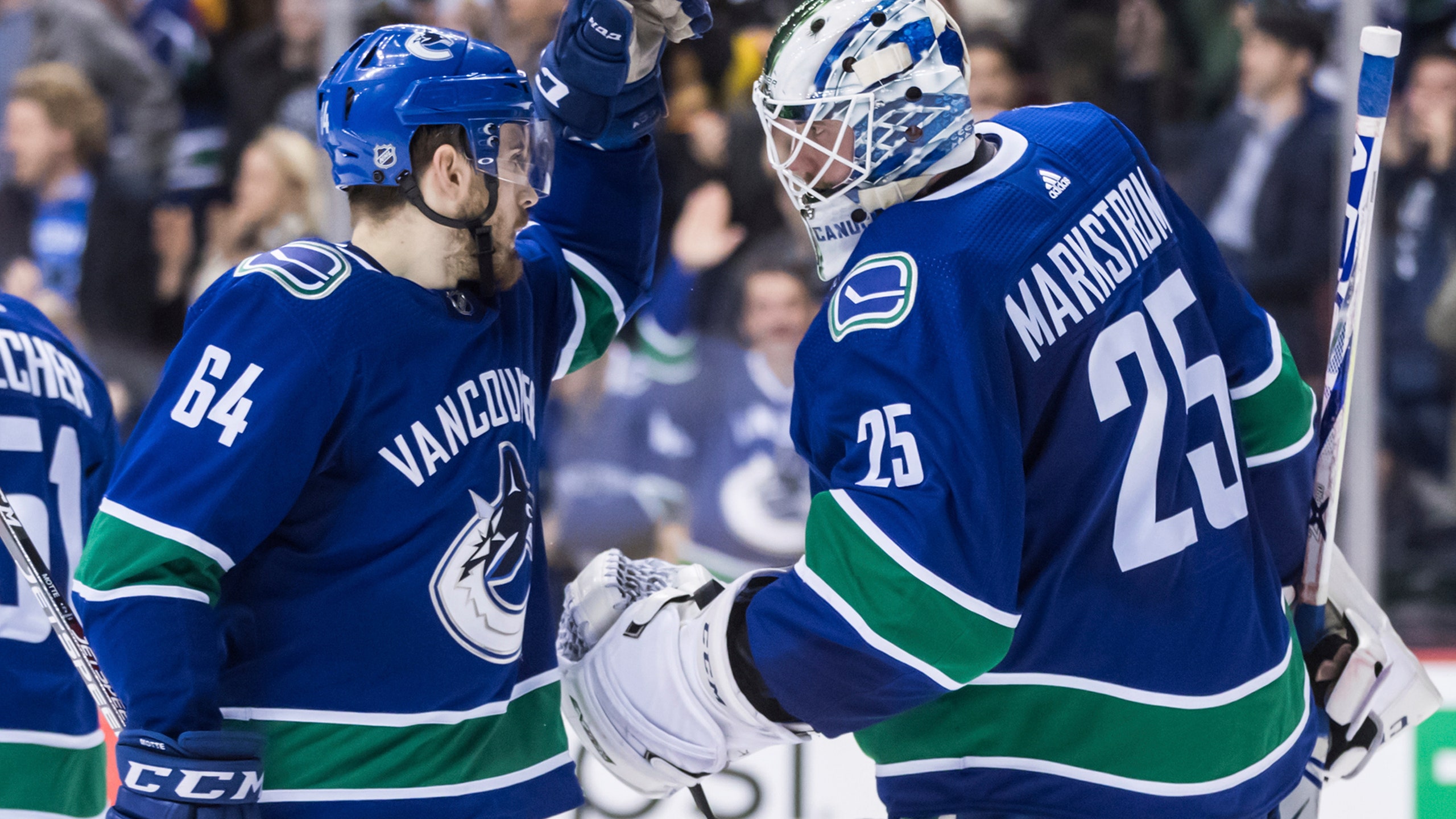 VANCOUVER, British Columbia (AP) — Bo Horvat's nerves were frayed in the final seconds of Vancouver's 4-0 victory over the Anaheim Ducks on Monday night.

The Canucks had a comfortable lead with just more than a minute to go when the center was called for interference. As he sat in the box, Horvat worried his penalty would spoil a clean sheet for goalie Jacob Markstrom.

It didn't. The 6-foot-6 Swede stopped all 29 shots by Anaheim for his first shutout of the season.

"I felt so bad when (the penalty) happened," said Horvat, who scored twice. "I was just so happy that he ended up getting the shutout there. I wouldn't have been able to forgive myself."

Alex Biega and Nikolay Goldobin also scored as the Canucks snapped a three-game skid and won in regulation for the first time in their last 11.

"Big win," Markstrom said. "We've been playing good but haven't got the goals we wanted. Today I thought we played a really good game for 60 minutes and it shows on the board."

Kevin Boyle made 25 saves but the Ducks dropped their third in a row.

"It weighs on you," assistant coach Marty Wilford said. "We are all competitive people and everybody wants to win, so obviously it's weighing on you and you can't have that defeated mindset when you fall behind like, poor me I can't come back. We just can't accept losing."

Anaheim is nine points out of a playoff spot.

The shutout was the third of Markstrom's career. His previous one came against Dallas on Feb. 11, 2018.

"I didn't even know that was his first, to be honest," he said. "He's had such a good year that he probably deserves a few more and you are happy for him."

The shutout was nice, Markstrom said, but the victory was a total team effort.

"It means that we won the game," he said. "It's nice to get one, for sure, but that mirrors how we played defense and played the game."

One of Markstrom's biggest saves came with nine minutes to go, when Derek Grant found the puck down low and Markstrom dove to make the stop.

Horvat's second goal of the night came midway through the third period after he dove to keep the puck in Anaheim's end. Josh Leivo got it back to Horvat in the faceoff circle and he sent a rocket past Boyle to make it 4-0.

The 23-year-old Horvat has a career-high 23 goals this season.

"I'm far from the peak of my career," he said. "I think I still have a lot of work to do, a lot to improve on and I'm just trying to get better day by day."

Goldobin opened the scoring 8:04 into the first after star rookie Elias Pettersson sliced a cross-ice pass to him in the neutral zone. The right wing ripped a shot over Boyle's shoulder for his eighth goal of the season and first in nine games.

Goldobin has been in and out of the lineup this season as the coaching staff challenges him to work on his game away from the puck. It's been a tough stretch, the right wing said, adding that he wants to stay with the Canucks.

"I like this organization and I know coaches believe in me a lot. I like the guys here. I feel like I'm home here," he said.

Biega added another goal before the end of the period with a long shot that somehow wound its way through traffic and slid in under Boyle's pad.

Early in the second, Anaheim's Brendan Guhle was sent to the penalty box for leveling Tyler Motte along the boards and the Canucks capitalized on the power play. Brock Boeser made a nifty pass to Horvat below the goal line and he poked it in to put Vancouver up 3-0.

NOTES: Ryan Spooner got his first point with the Canucks, assisting on Biega's goal. Vancouver acquired the 27-year-old forward in a trade with the Edmonton Oilers this month. ... British Columbia native Angus Redmond was called up to the NHL for the first time Monday. The 23-year-old goalie backed up Doyle for the Ducks. ... It was linesman Lonnie Cameron's 1,500th game in the NHL. His milestone was celebrated before puck drop.

Canucks: Begin a three-game road trip at Colorado on Wednesday.