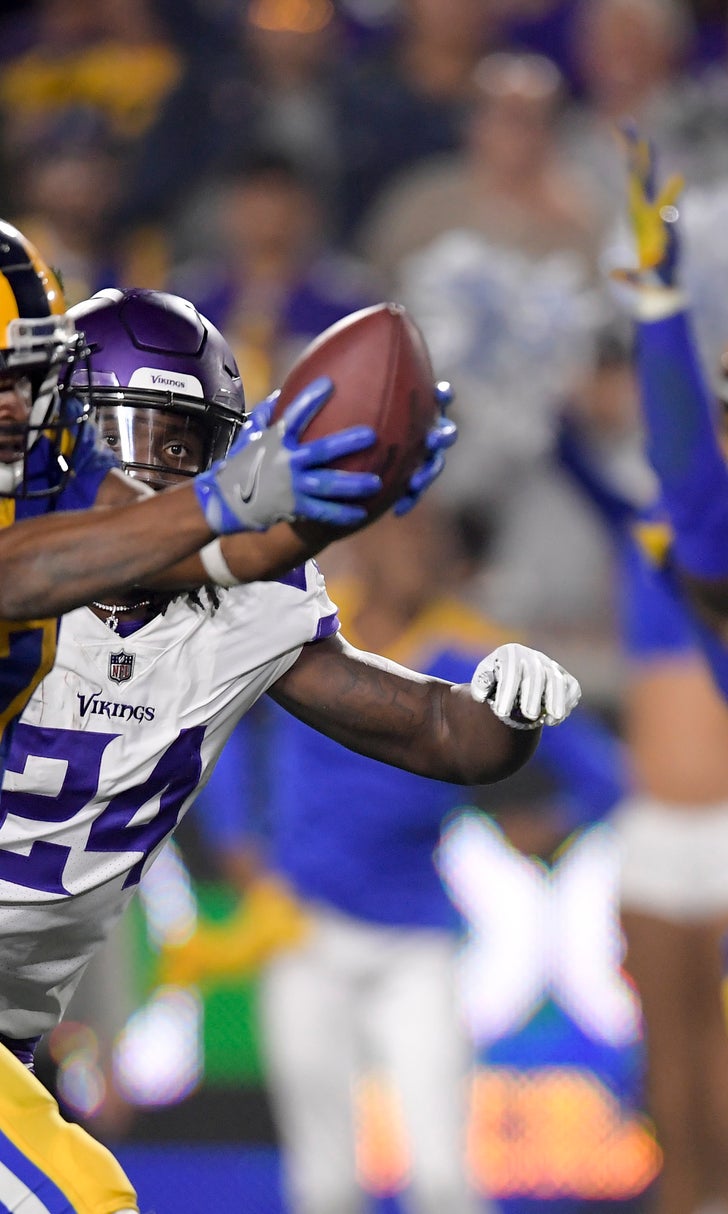 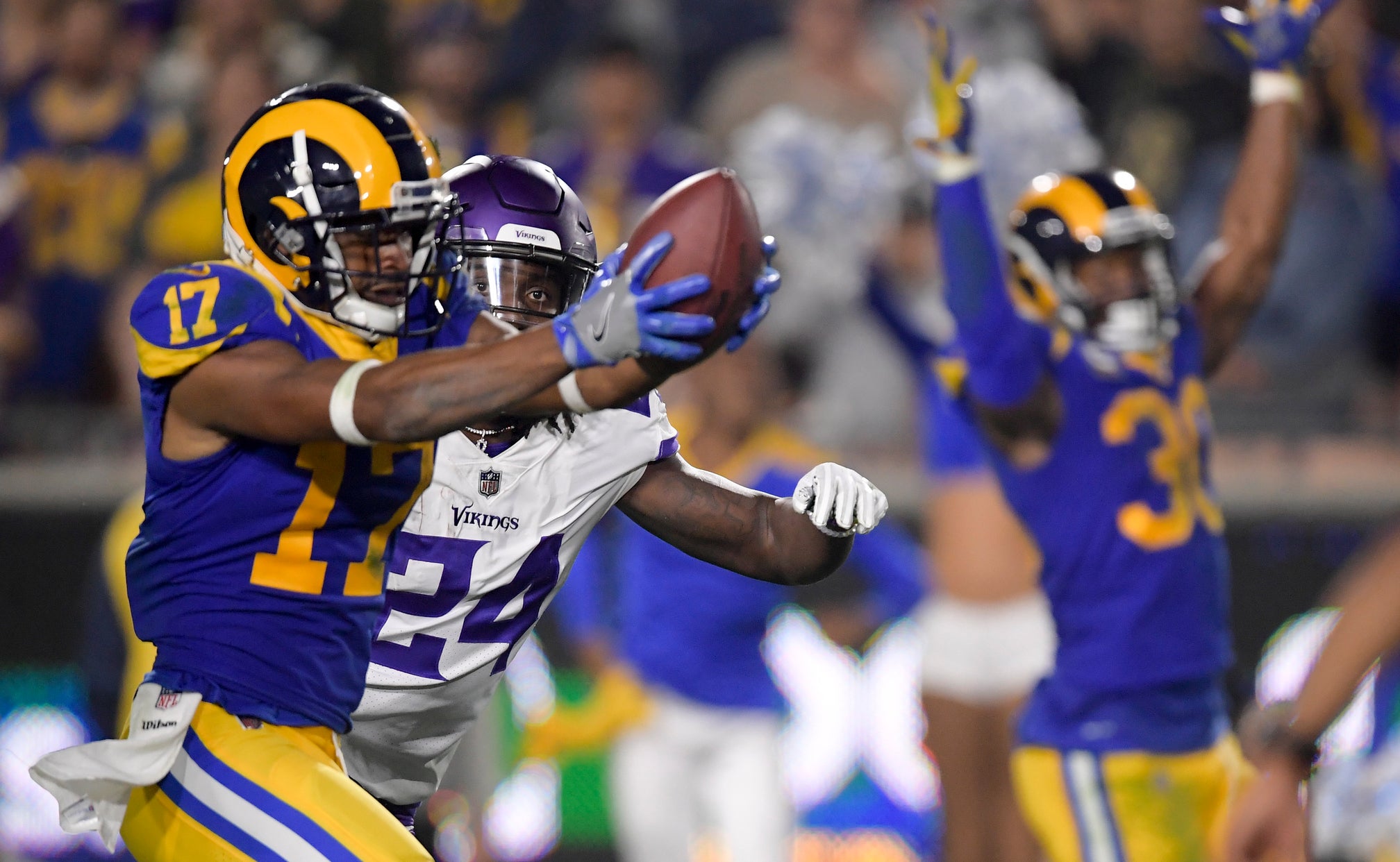 LOS ANGELES (AP) — Kurt Warner, Mike Martz and the Greatest Show on Turf never put up as many yards passing in a single game as Jared Goff and Sean McVay did Thursday night.

The St. Louis Rams had one of the greatest offenses in NFL history around the turn of the century. Fifteen years later, their West Coast descendants look ready to make their own mark on the league.

After Goff passed for 465 yards and five touchdowns in Los Angeles' 38-31 victory over the Minnesota Vikings, the Rams are 4-0 for the first time since 2001. That's also the last season in which the Rams made the Super Bowl, and the final unofficial season of the Greatest Show on Turf — the high-octane offense masterminded by Martz and put into action by Warner, Marshall Faulk, Isaac Bruce and their slew of talented teammates.

Warner was watching when Goff went 26 for 33 and shattered his previous career highs for yards passing and TD passes with a dynamic performance against the Vikings. He spread the ball to three receivers who had 100-yard games, while do-everything running back Todd Gurley had 73 yards receiving, 83 yards rushing and a TD catch.

"Time to get out the record books," Warner tweeted , adding that the Rams and Goff are "looking to SMASH some of those GSOT numbers! Keep it up boys - it's time!"

No wonder Warner was impressed: Goff's performance was the third-biggest in Rams history and the most prolific since 1982, surpassing any game by Warner, Marc Bulger or Jim Everett.

"Those are quite flattering words," McVay said Friday of Warner's tweet, which included a hashtag hailing the "Greatest Show on Turf II."

"It's a reflection of the way our players are playing, but ultimately the truest measurement of performance is that consistency, and we've got to consistently do it," McVay added. "We've done it for one quarter of the season so far where we've played at a pretty high level. Now the challenge is, can we continue it on when we get back for Week 5?"

While Goff has made obvious strides in confidence and decision-making from his strong sophomore season, his effort isn't the only upgrade on an offense that already made a stunning transformation back in McVay's first year.

The Rams are averaging 468.5 yards per game through the first quarter of the season, second-most in the league and 107 yards per game more than they put up last season, when they were the NFL's highest-scoring team.

Left tackle Andrew Whitworth, whose steady blocking and leadership are lesser-noticed keys to the offense's success, credits the Rams' smooth start to collaboration in practice and film study.

"I have been honestly floored from a perspective of just how humble and how hungry this offense has been about conceptual football," Whitworth said. "It's not really about whether they are going to get catches or touches, or whether Todd is going to get the ball so many times. ... It's about understanding exactly how to attack a team, understanding what their defense does. It's not just guys trying to figure out how to block their guy. It's understanding why their guy plays this way in this system. It takes you to a level where you are almost out there playing as a coach."

Goff, McVay and the Rams are far from satisfied, however. McVay only sees progress toward a destination that's still many months away.

"To come away clean when you're 4-0 after this is a really important thing," McVay said. "The guys have done a great job of creating explosive plays, whether it's through the run game (or) through the pass game. I think we've been extremely efficient the past couple of weeks, but you talk about putting together complete games, being better situationally. As many great things as we did last night, we were 1 for 6 on third down. I really, realistically think that I've got to do a better job."

McVay has a long weekend to spend looking for ways to improve his formidable offense. The workaholic coach plans to spend time with his parents and girlfriend, but he also plans to watch a little football while he starts to prepare for the Rams' upcoming three consecutive road games.

"I like watching football," McVay said. "I can at least feel like I'm sitting there as a fan, instead of being a total basket case like I am when we play."

NOTES: McVay declined to confirm the Rams will stick with K Sam Ficken after he missed a 28-yard field goal attempt in the fourth quarter. Ficken has spent two games filling in for All-Pro Greg Zuerlein, who still isn't ready to return from injury. McVay and special teams coordinator John Fassel plan to talk before the Rams decide whether to find another kicker. ... LB Dominique Easley didn't play due to a knee injury, and McVay said the veteran "might be out for a little bit of time. We're looking into it. This poor guy has been through a whole lot." Easley has had multiple surgeries on both knees.

Herd Hierarchy: Week 13
The Titans and Seahawks are the biggest movers in Colin Cowherd's latest rankings. As for the Chiefs? Not much has changed.
1 hour ago

NFL's Top Plays Of Week 12
It's another wild Sunday in the NFL. Check out the best moments from across the league!
2 days ago

The Rams Are Rollin' In The NFC West
Jared Goff and the Los Angeles Rams are shining bright at the perfect time of year, Martin Rogers writes.
4 days ago

Herd Hierarchy: Week 12
It's a bloodbath in the latest "Herd Hierarchy," where Cowherd has tossed out four top 10 teams from last week.
November 25
those were the latest stories
Want to see more?
View All Stories
Fox Sports™ and © 2020 Fox Media LLC and Fox Sports Interactive Media, LLC. All rights reserved. Use of this website (including any and all parts and components) constitutes your acceptance of these Terms of Use and Updated Privacy Policy. Advertising Choices. Do Not Sell my Personal Info