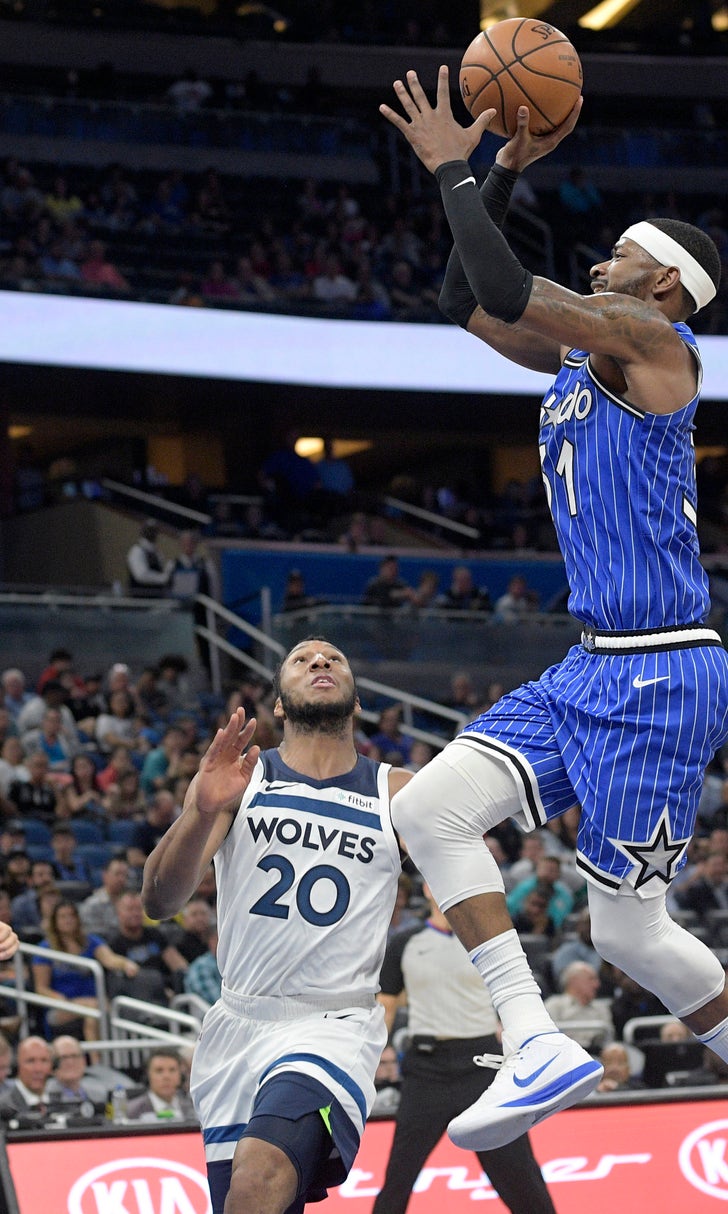 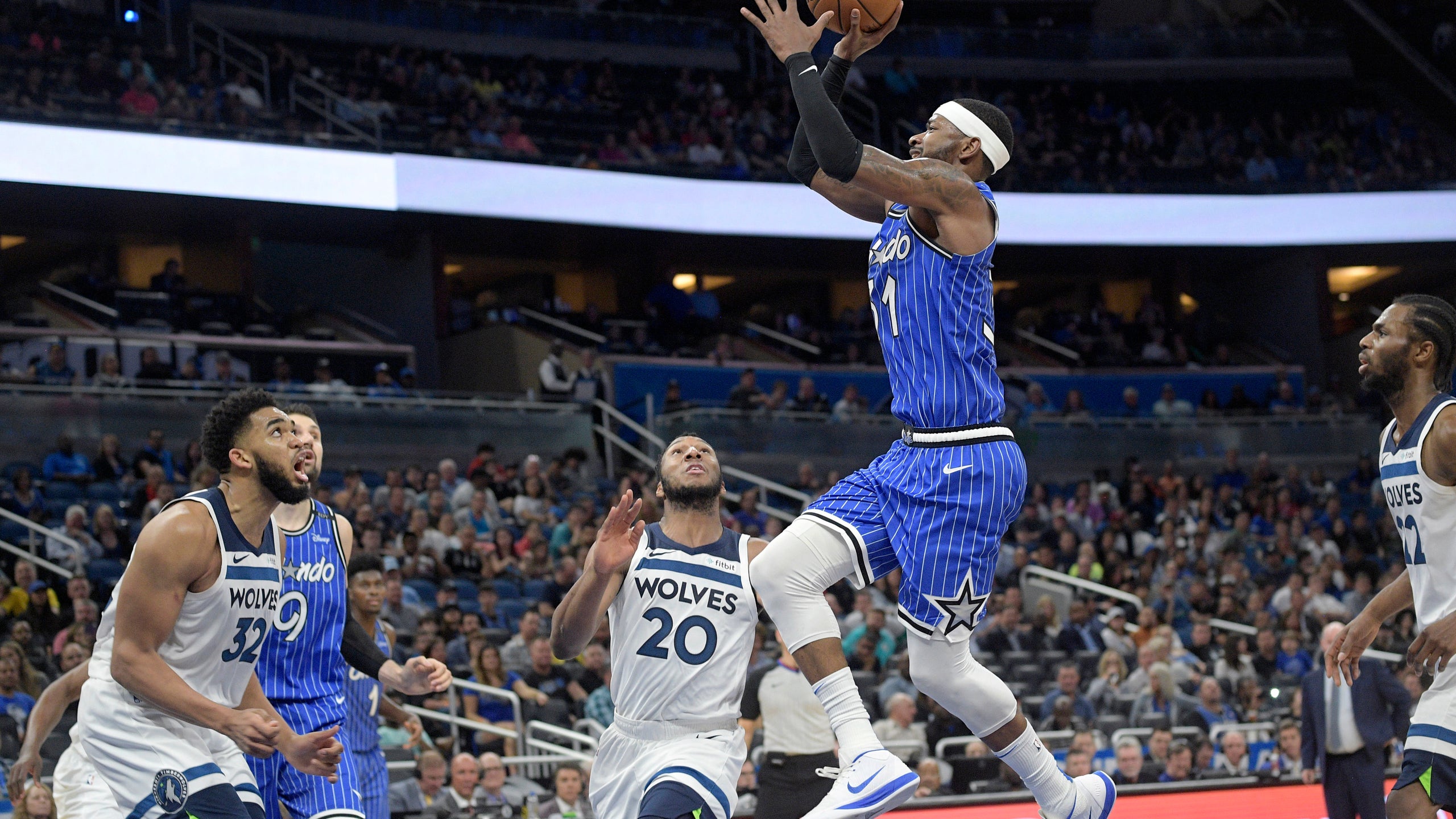 ORLANDO, Fla. (AP) — The trade deadline came and went and Terrence Ross remained in Orlando, comfortable in his routine.

Ross, whose expiring contract and big scoring production had set him up as a potential trade asset, scored 32 points and came up with a big defensive play to help the Magic to a 122-112 victory over the Minnesota Timberwolves on Thursday night.

"Right now is not the time to change anything you're doing," said Ross, who was relieved when the deadline passed. "You've got to stay in your routine as much as possible."

"There are nights in this league when you're driving home and say to yourself, 'I'm blessed to be doing this,'" Magic coach Steve Clifford said. "Terrence is an exceptional shot-maker and he's a lot better off the dribble than I realized. He's playing at a really high level."

Nikola Vucevic added 21 points, Aaron Gordon 19 and Evan Fournier 18 for Orlando, which shot 54 percent and scored a season-high 71 points in the first half.

Karl-Anthony Towns had 27 points and 11 rebounds for the Timberwolves, who lost for the fifth time in six games. Andrew Wiggins added 23 points.

Isaiah Canaan's jump shot gave Minnesota its last lead at 39-38 early in the second quarter, but things quickly unraveled for the Timberwolves, especially on defense.

Ross had 20 points in the first half, leading the Magic to a 71-58 halftime lead. Orlando shot 65 percent in the half.

"They came out hot. We've got to do a better job contesting," said Minnesota coach Ryan Saunders. "Terrence Ross got hot in the second quarter. We were aware of how hot he's been shooting the ball lately. You let him see one or two or even three go through early, it's going to be a long night."

Wiggins scored 10 points in the third quarter, but the Timberwolves could get no closer than 11 until Towns converted a three-point play with 2:39 left in the fourth.

Wiggins followed with a mid-court steal and lined up a dunk that could have cut the lead to seven, but Ross chased him down and prevented a score that could cut the gap to seven.

"I didn't know if I was going to block it but it was worth the effort," said Ross, who was not officially credited with a block. "You don't know. Sometimes they hear footsteps and sometimes they will alter (the shot). I got lucky."

Timberwolves: G Jeff Teague participated in the morning shootaround but missed an eighth game with a sore left foot. ... G Derrick Rose was not with the team, missing a fifth game with a sore right ankle. ... Towns was shocked to hear it announced that he had fouled out with 5:10 remaining after committing his third foul.

The Magic acquired point guard Markelle Fultz, the No. 1 pick in the 2017 NBA Draft, from Philadelphia, but it doesn't sound like he will be playing anytime soon.

Asked when the team expected Fultz to play, president of basketball operations Jeff Weltman said: "We're going to do it right, we're not going to do it fast."

The Magic gave up F Jonathon Simmons, a protected 2020 first-round pick and a 2019 second-round pick for Fultz, who is out with Thoracic Outlet Syndrome, a nerve problem in his shoulder.

Fultz appeared in only 33 games in his 1 ½ seasons in Philadelphia, averaging 8.2 points in 19 games this season. He last played on Nov. 19.

"We look forward to getting him in here, getting our arms around him, understanding everything he's dealing with and getting him through it," Weltman said.

Magic: At Milwaukee on Saturday night.

Terrence Ross
share story
those were the latest stories
Want to see more?
View All Stories
Fox Sports™ and © 2021 Fox Media LLC and Fox Sports Interactive Media, LLC. All rights reserved. Use of this website (including any and all parts and components) constitutes your acceptance of these Terms of Use and Updated Privacy Policy. Advertising Choices. Do Not Sell my Personal Info