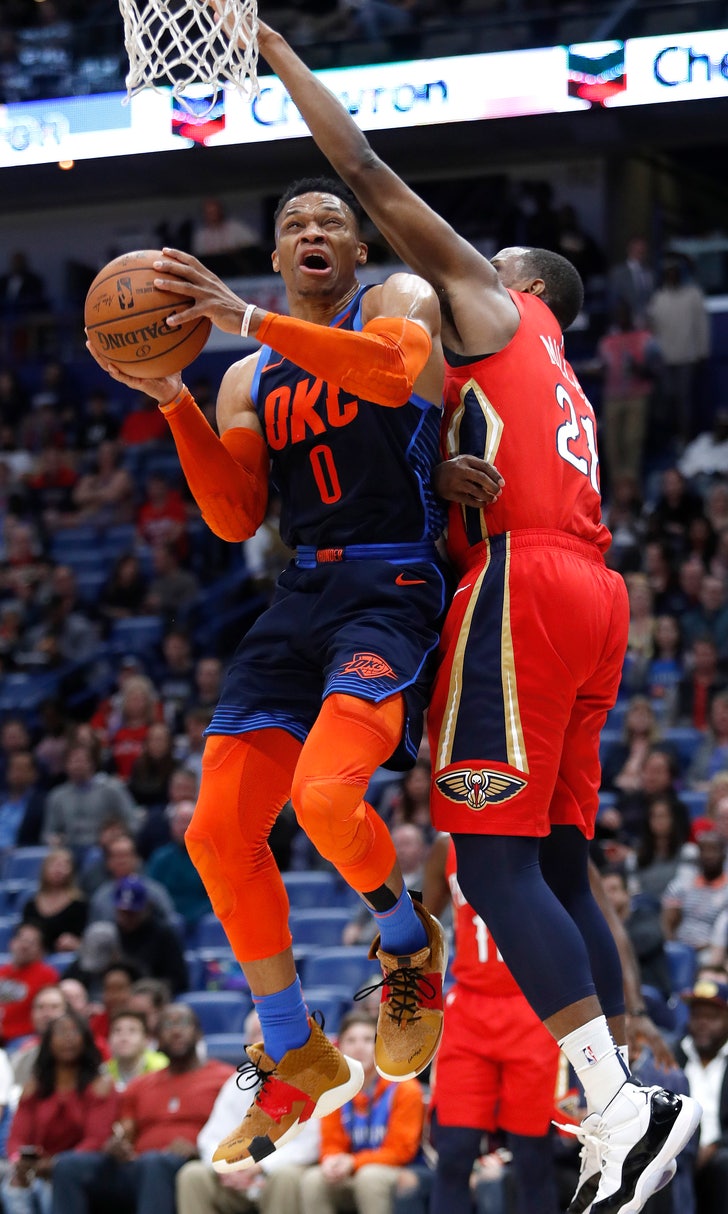 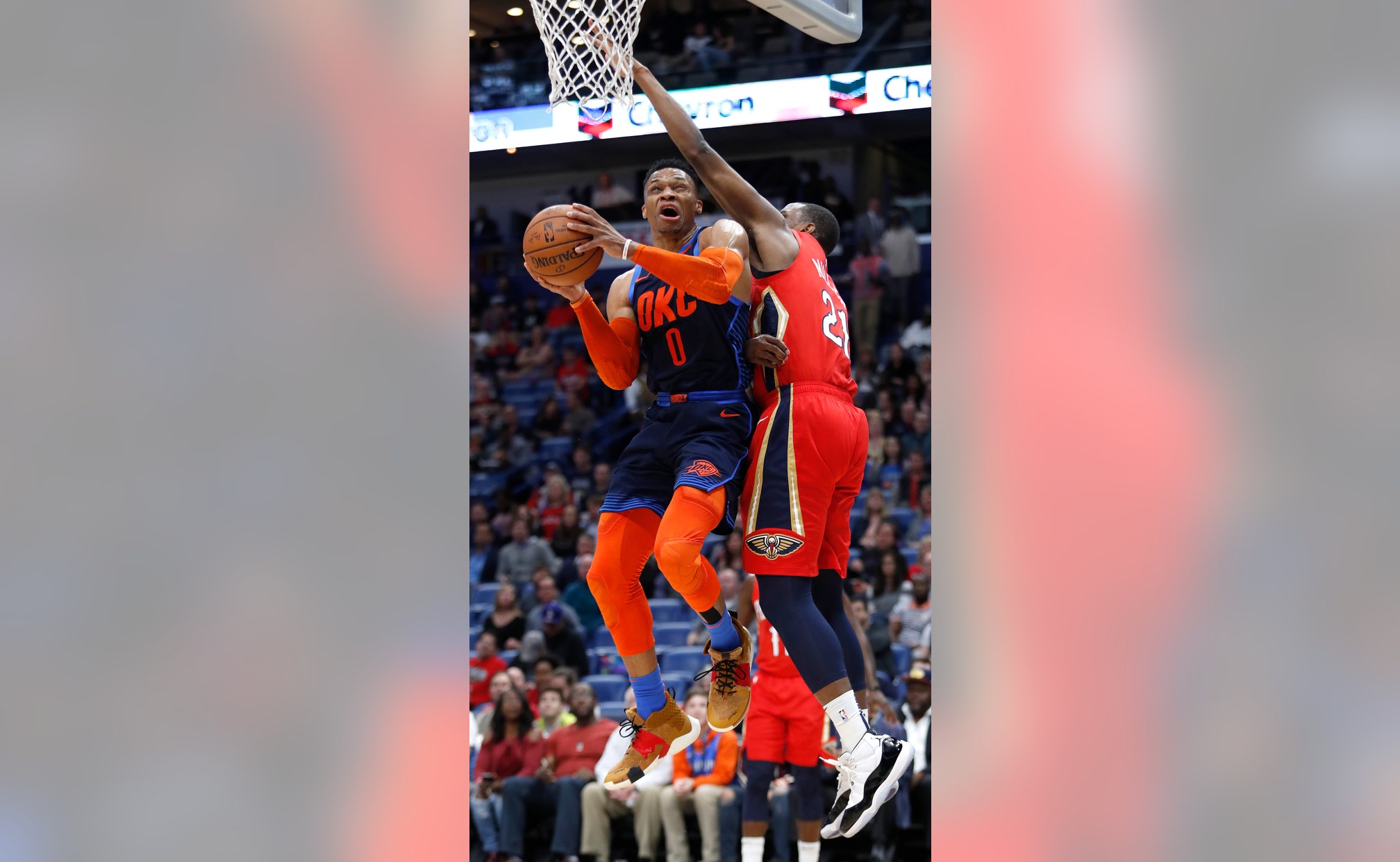 NEW ORLEANS (AP) — Anthony Davis grimaced and didn't move his left arm as he walked off the court at halftime.

Whether those were Davis' final moments in a Pelicans uniform — or whether he even plays in this weekend's All-Star Game — remains to be seen.

Davis, who has asked to be traded, left the Smoothie King Center with his agent, Rich Paul, during the second half to get an MRI exam, the results of which were expected by Friday.

But it's only a matter of time before the Pelicans have to learn to play without Davis for good anyway, and they managed rather well following the six-time All-Star's departure against record-setting guard Russell Westbrook and the Thunder.

"To tell you the truth, this whole thing has been a dumpster fire," coach Alvin Gentry said, alluding to the effect Davis' trade demand has had on the rest of the team. "It's hard for guys to go through what they've been through, and to be able to come out and beat a team of that quality, I'm happy for all the guys."

But Gentry lost his patience when asked to elaborate on Davis leaving the arena during the game.

"I'm going to talk about the guys that played. They did a great job," Gentry said. "We found a way to win the game. That's what's important."

Gentry then stormed off, ending his postgame interview session in uncharacteristically abrupt fashion.

Westbrook increased his record triple-double streak to 11 games with 44 points, 14 rebounds and 11 assists. But he missed a late 3-point attempt when the Thunder trailed by five just inside the final minute of the game. New Orleans rebounded and held on from there.

"They played good, man," Westbrook said of the Pelicans, who snapped the Thunder's four-game winning streak. "Honestly, the stuff that's going on around here, I don't really know much about, but they won tonight and that's all the matters."

Paul George scored 28 points for Oklahoma City, but made only 3 of 17 3-point attempts.

"A couple of them was in and out where it felt really good. A couple of them I wish I could have back," said George, who also gave Holiday credit for his defensive effort. "He's scrappy and he takes pride in defense. Not a lot of guys do. I have the utmost respect for his approach and how he defends and wants to play defense."

Davis was in the game when the first half ended, but kept his left arm still as he walked to the locker room shortly after fouling Nerlens Noel on an attempted shot block with his left hand in the final second of the second quarter. When the second half began, the Pelicans announced that Davis was out of the remainder of the game with a left shoulder injury, putting his availability for this weekend's All-Star Game in doubt.

Davis was in the starting lineup and played 16 minutes, scoring 14 points to go with four rebounds, two assists and a block. His performance helped New Orleans take a 66-63 lead into halftime.

Coming off a listless, 30-point loss to Orlando two nights earlier in which Davis scored just three points on 1-of-9 shooting, the Pelicans bounced back with a far superior showing against a team with the third-best record in the Western Conference.

The Pelicans led for most of the game and by as many as 17 in the third quarter.

The Thunder pulled as close as 121-118 with 2:52 left, when George hit a straight-on 3, hollering and pounding his chest after the shot went down.

But the Pelicans didn't fold thanks to Randle, who responded by tipping in Kenrich Williams' missed 3-pointer, then added a layup with 1:30 to go and an 8-foot fall-away with 1:12 left.

Thunder: Noel had 22 points and 13 rebounds. He was the only other Thunder player besides Westbrook and George to score as many as 10 points. ... Oklahoma City had 72 points in the paint but missed 34 of 44 3-point attempts. ... Westbrook was 4 of 12 from deep.

Pelicans: E'Twaun Moore intentionally fouled Ray Felton so he could check out of the game and limped to the bench favoring his left knee with 31 seconds left in the first quarter. He returned in the second quarter and finished with 15 points. ... Jahlil Okafor scored 12 points. ... Gentry said before tip-off that guard Elfrid Payton is expected to return from a right ankle sprain after the All-Star break.

"I didn't know I was close, honestly. So that's crazy, man," Westbrook said. "Just truly honored and blessed obviously to be in one place, organization. To be able to be the all-time leading scorer in a place is a pretty big accomplishment, I must say, so I'm just truly thankful and humbled."

A Big Liability In Brooklyn
How do sportsbooks react to blockbuster trades? How much money is on the Nets? And is there any value? Sammy P asked the experts.
5 hours ago

Worthy of Attention
Zach LaVine is setting the league on fire. Is Chicago officially looking at its next superstar guard?
6 hours ago