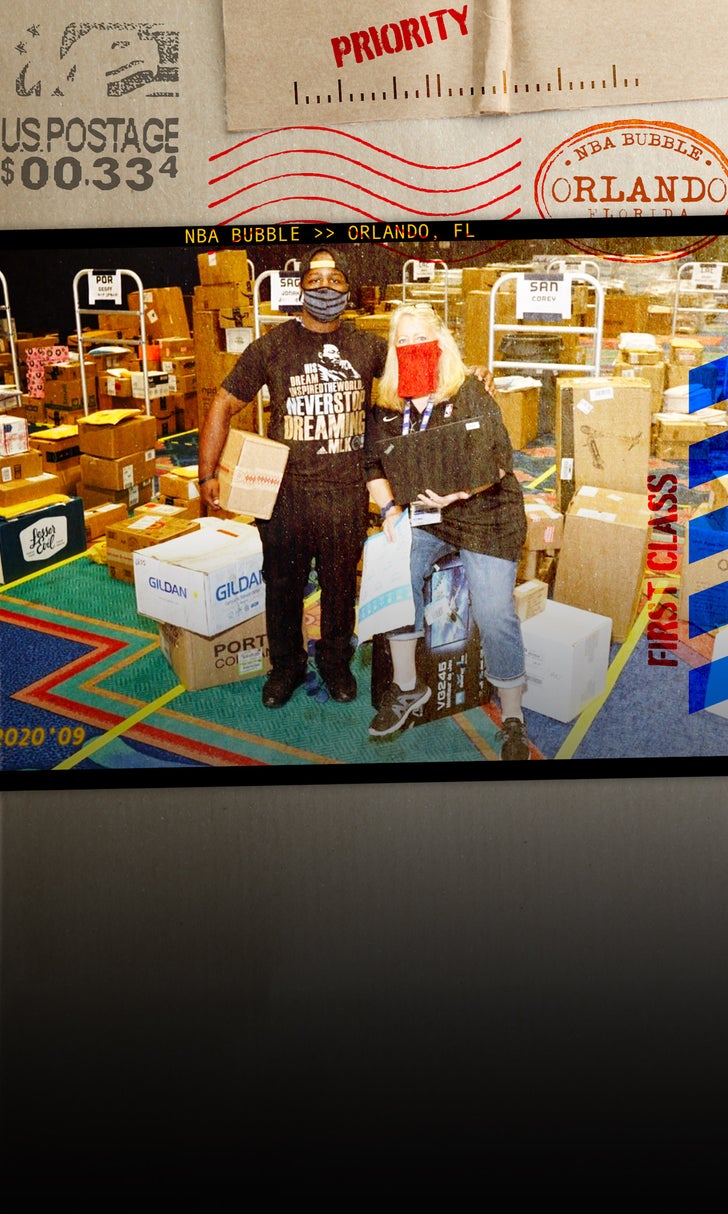 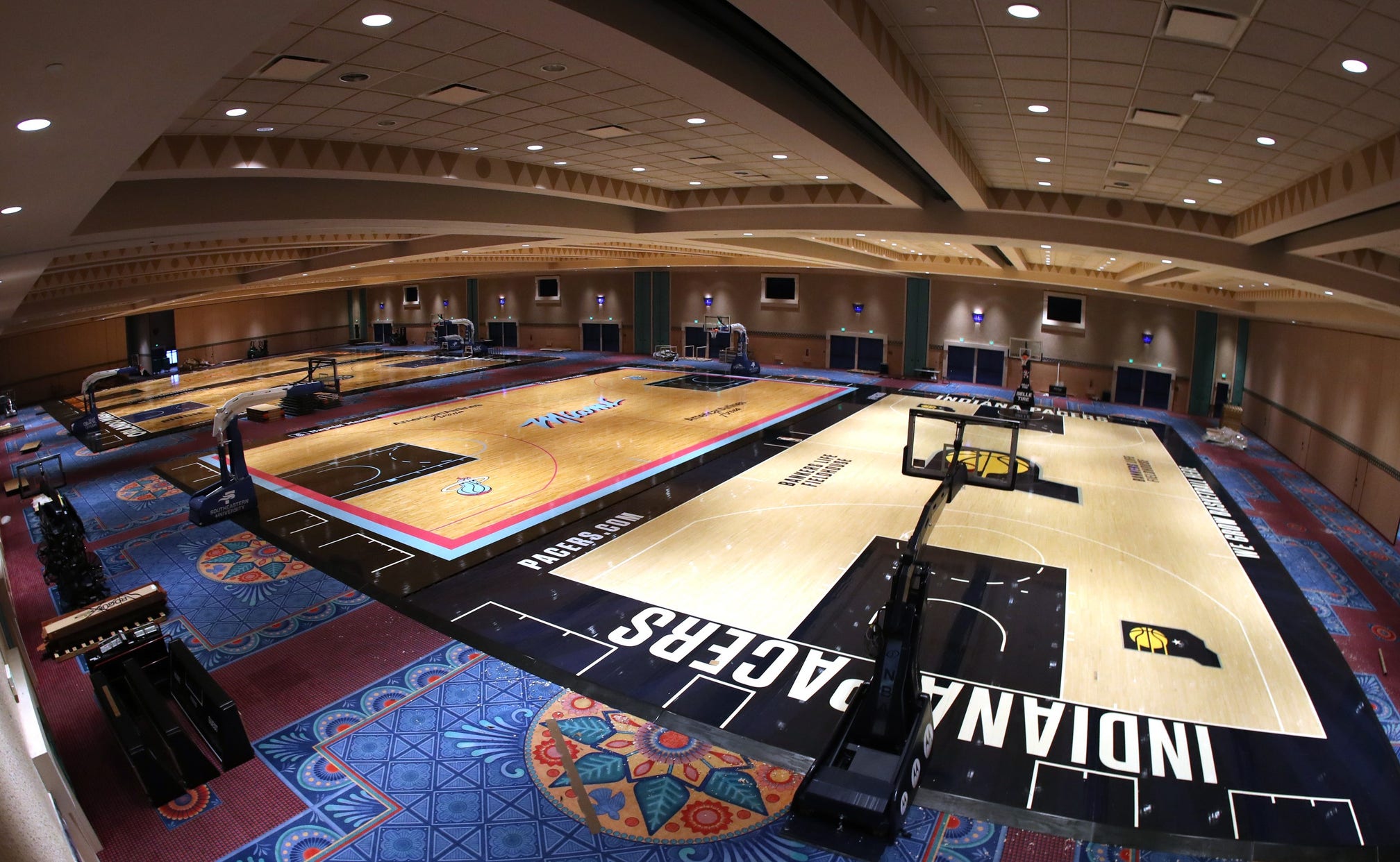 They say there’s a lot of magic at Disney World, but that doesn’t mean basketball courts assemble themselves or packages walk into hotel rooms like some sporty sequel to Beauty and The Beast. The bubble was not a ready-made basketball utopia free of germs. People had to build it.

And those people are Heather Messer and Vernon Peterson.

Messer, who’s been with the NBA for 30 years, is the Senior Director of Event Management, while Peterson has been with the league since 2005, and leads the mailroom at the Midtown Manhattan headquarters. When I spoke to them by phone last month, they were photographing each and every one of the many deliveries that just arrived at the warehouse.

“We have yet to have a Monday that we don’t have 1000 packages,” Messer said. “Every Monday. Players are calling saying hey, did this come in? Or, I’m looking for that, did that come in?”

Logistics stop for no one. Each tracking number has to be logged to be sure things didn’t go missing or aren’t addressed to the wrong player, staff, or reporter. There are many names they don’t recognize, and companies regularly get addresses or room numbers wrong.

There’s a lot to be sorted out before and after the goods are sorted.

Which is why it was crucial that Messer and Peterson got to Orlando before anyone else – and why they’ll stay later, too. Someone has to pack up the center of the basketball universe.

When the two got to Disney World, the convention centers where the games are played were simply cavernous rooms. It was up to them to receive the sixteen courts shipped down on semi trucks and make sure they were installed properly.

Weight rooms, team rooms, refrigerators – all of it had to be shipped in. The NBA had four huge trucks of IT equipment driven down from New Jersey simply to service the needs of league staff.

“It was easier then,” Messer said, “because the campus wasn’t clean yet. Those trucks come in, we’d grab a crew, unload them, and disinfect them before teams or anybody was around it.”

Now, everything has to be disinfected before it enters the bubble.

You’d think that the heavy lifting would be over once Peterson and Messer and their team put the campus together. But it never ends — when we spoke, the two were in the middle of overseeing the departure of the six teams that didn’t make the playoffs and moving the Trail Blazers into the Grand Floridian, a different hotel from the one Portland stayed in during the play-in rounds.

Moving players from room to room and back to their home cities would be a daunting task no matter what, but doing so while maintaining the strict sanitary guidelines seems almost impossible.

Messer and Peterson, however, have it down to a science.

Each team has a point person for logistics who hands out boxes to the players. Players then pack up their stuff and label what they want in cargo on the plane and what can be shipped on a truck. Messer and Peterson’s team also has boxes of donations that go to local organizations in Florida with the help of the Orlando Magic.

“A lot of guys marked things for donations, drinks and food, and T-shirts,” Messer said. “They’re leaving behind shoes and stuff. Really large, good amounts of stuff. I think it’s good for us overall. You know, working on donations, it’s like a contact with the outside world and it helps. It starts feeling very isolated in the bubble.”

Messer and Peterson had just hit the halfway mark when we spoke — two months down, two months to go. It gets lonely. Fortunately, they’ve got a good group in the warehouse who keep each other laughing, and they’ve got the packages themselves to keep things light.

“Actually, it was 50,” Peterson said. “It makes you laugh, because it’s like, somebody’s going to have a good time.”

I asked which team bought the toys.

“I don’t know if we’re allowed—” Messer started and then stopped. “Okay, it was for Utah.”

Besides Nerf guns, Messer and Peterson have received full-size refrigerators, multiple massage chairs for league staff and a few teams, lots and lots of wine, wine fridges, and more golf clubs than a pro shop.

“It’s a lot that goes on behind the scenes,” Peterson said, laughing.

Next time you watch an NBA game in the bubble, take a second to appreciate that every court physically exists because Messer and Peterson made sure it did. They’re the unsung heroes of the operation who’ve undertaken a monumental task: conjuring up safe arenas from nothing but wall-to-wall carpets and fluorescent lights in Orlando. A truly magical transformation.