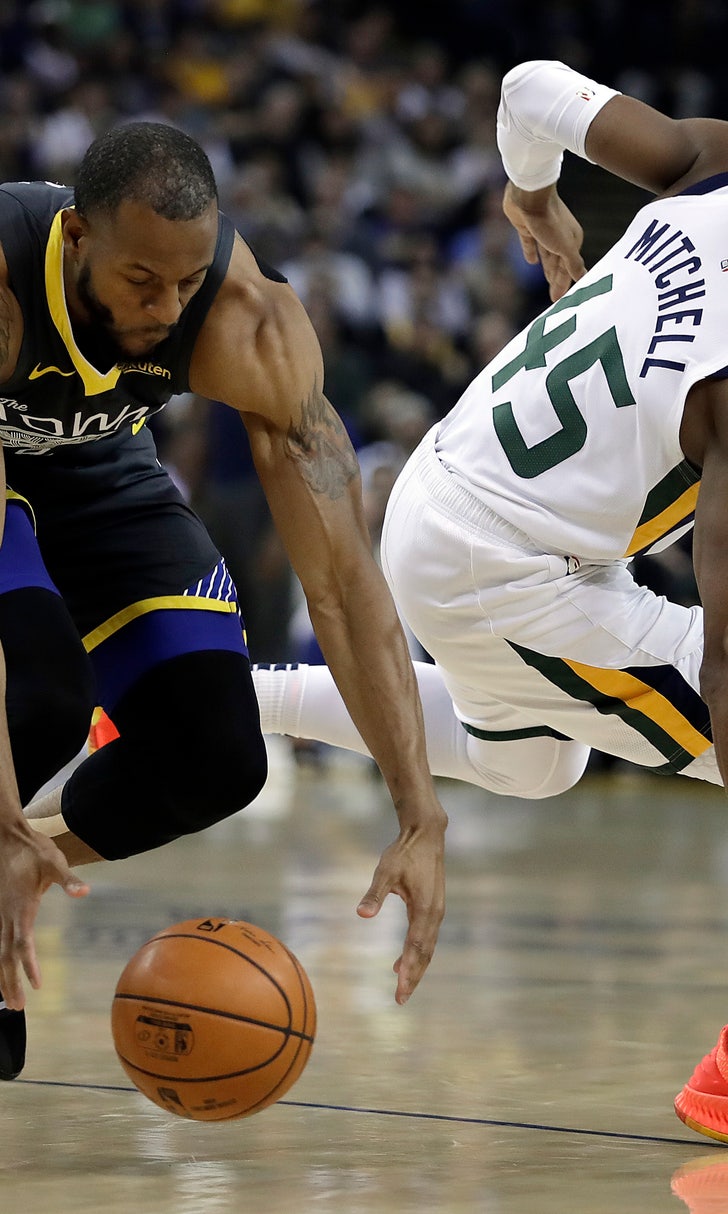 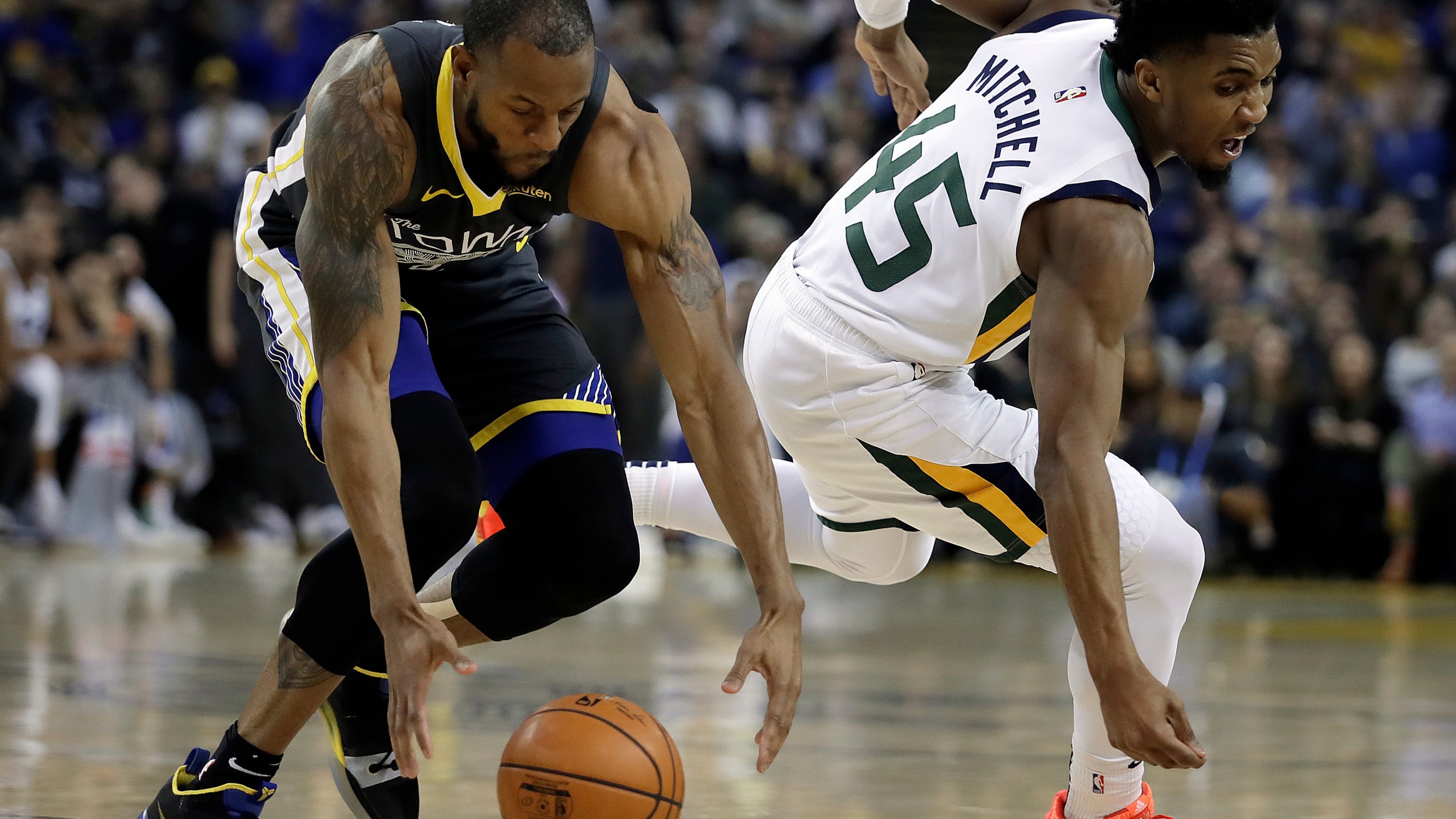 OAKLAND, Calif. (AP) — Golden State wasn't as crisp offensively as it usually is, and the two-time defending NBA champs certainly know they'll need to get better coming out of the All-Star break.

Some heady defense early and late, along with some timely perimeter scoring from Stephen Curry helped make up for it.

Curry made a pair of pivotal 3-pointers in the fourth quarter, Kevin Durant had 28 points and seven assists, and the Warriors beat the Jazz 115-108 on Tuesday night.

"We have spurts where we look unstoppable and then we have some spurts where it just gets a little congested and bogs down a little bit," Curry said. "We're getting better. Everybody's attention is on those details to try to get better. We have 26 games left to figure it out."

At 41-15, the Warriors have the second-best record in the NBA behind Milwaukee. The Warriors have won four straight and 16 of 17 but have been slowing down heading into the break.

The win over Utah was the third straight in which coach Steve Kerr's team has had to rally from behind.

"They were rolling offensively," Kerr said of the Jazz. "We turned up the volume defensively down the stretch. Steph got hot and we were able to push (ahead)."

Curry had 24 points on 8 of 19 shooting. The two-time MVP missed his first five shots beyond the arc and finished 5 of 14 on 3s.

"We need to play better," Durant said. "I believe my coaches and teammates think the same thing. I just don't want to get complacement."

Donovan Mitchell had 25 points and seven rebounds for Utah. Rudy Gobert added 13 points and 16 rebounds. Gobert's double-double is his 46th of the season.

"They made some tough shots and then I thought we just wore down a little bit and had some breakdowns defensively late where they were able to get clean looks," Jazz coach Quin Snyder said. "They're too good to give them good looks, and they got some."

The Warriors came back from 17 down to beat Phoenix on Friday and were down 19 to Miami on Sunday before winning. Both of those deficits were at halftime.

This time Golden State fell behind 91-84 early in the fourth before going on a 21-4 run.

Andre Iguodala helped spark the surge with a steal and dunk while Thompson had a 3-pointer and reverse layup, but it was Curry's burst that was key.

Curry made back-to-back 3s then drove around Ricky Rubio for an easy layup that put the Warriors up 105-95.

"We turned up the volume defensively down the stretch, Steph got hot and we were able to push (ahead)," Golden State coach Steve Kerr said.

Before the game Curry, Durant and Thompson received their All-Star jerseys from general manager Bob Myers.

The Warriors got off to a rough start with their perimeter shooting, going 1 of 9 beyond the arc in the first quarter, and didn't find their stroke until late in the second.

Curry made back-to-back 3s, Iguodala added one and Thompson — who appeared to dislocate the ring finger on his left hand in the first quarter — made another.

Golden State led 62-53 early in the third before Mitchell got Utah rolling with a pair of 3s and seven points as part of an 18-7 run. Neto later made consecutive layups to put the Jazz up 84-81.

Jazz: Rubio missed an open layup and shot an airball on a 3-point try in the first quarter. ... Utah committed 16 turnovers that led to 27 points for Golden State. . Six Jazz players scored in double figures.

Warriors: Curry got off to another slow start in the first quarter, missing all three of his 3-point attempts and shooting 2 of 6 overall. ... Kerr said he plans to rest Cousins and Shaun Livingston for the second half of Golden State's back-to-back Wednesday in Portland. ... Thompson made three 3s to move past Dale Ellis into 17th place on the NBA's list for career 3-pointers with 1,721.

Green made one of the biggest defensive plays of the game when he blocked a 3-point try by Jae Crowder early in the fourth quarter. It came in the midst of an 11-2 run by the Warriors and not long after Green deflected an alley-oop pass to Gobert.

"Just what he always does," Kerr said. "Guards everybody on the floor, gets out to shooters, protects the rim. You have to have somebody like Draymond to anchor your defense."

Warriors: Play at Portland on Wednesday.