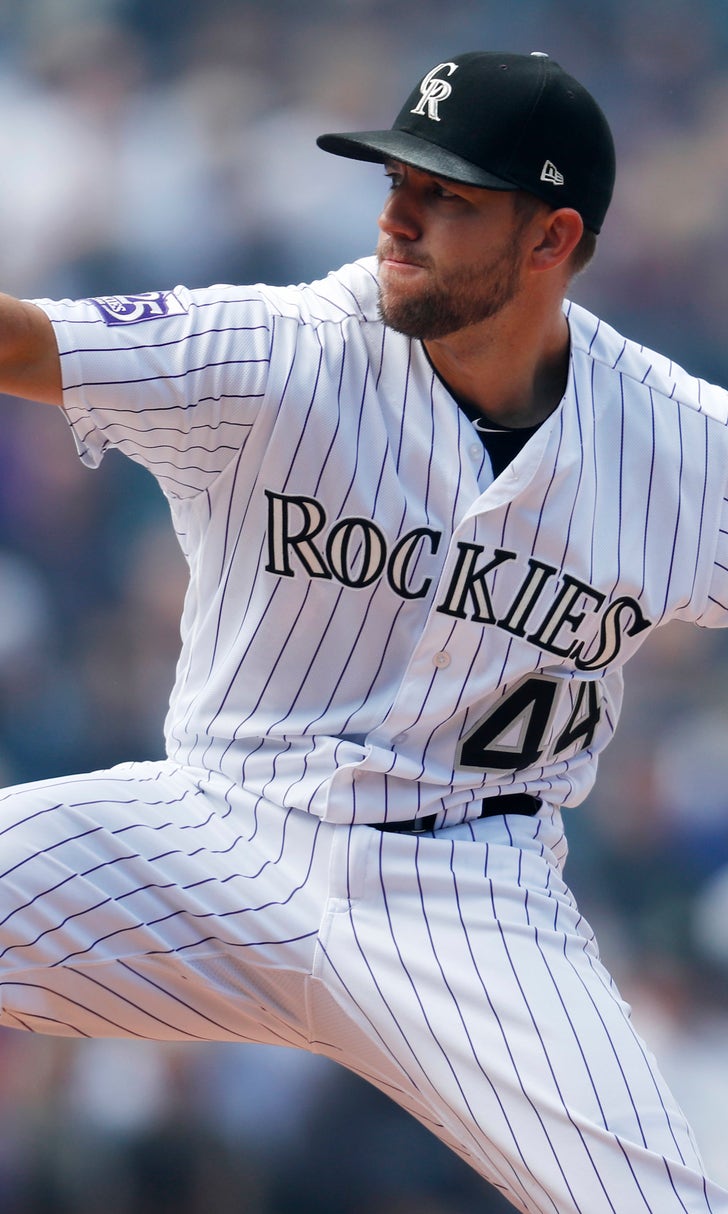 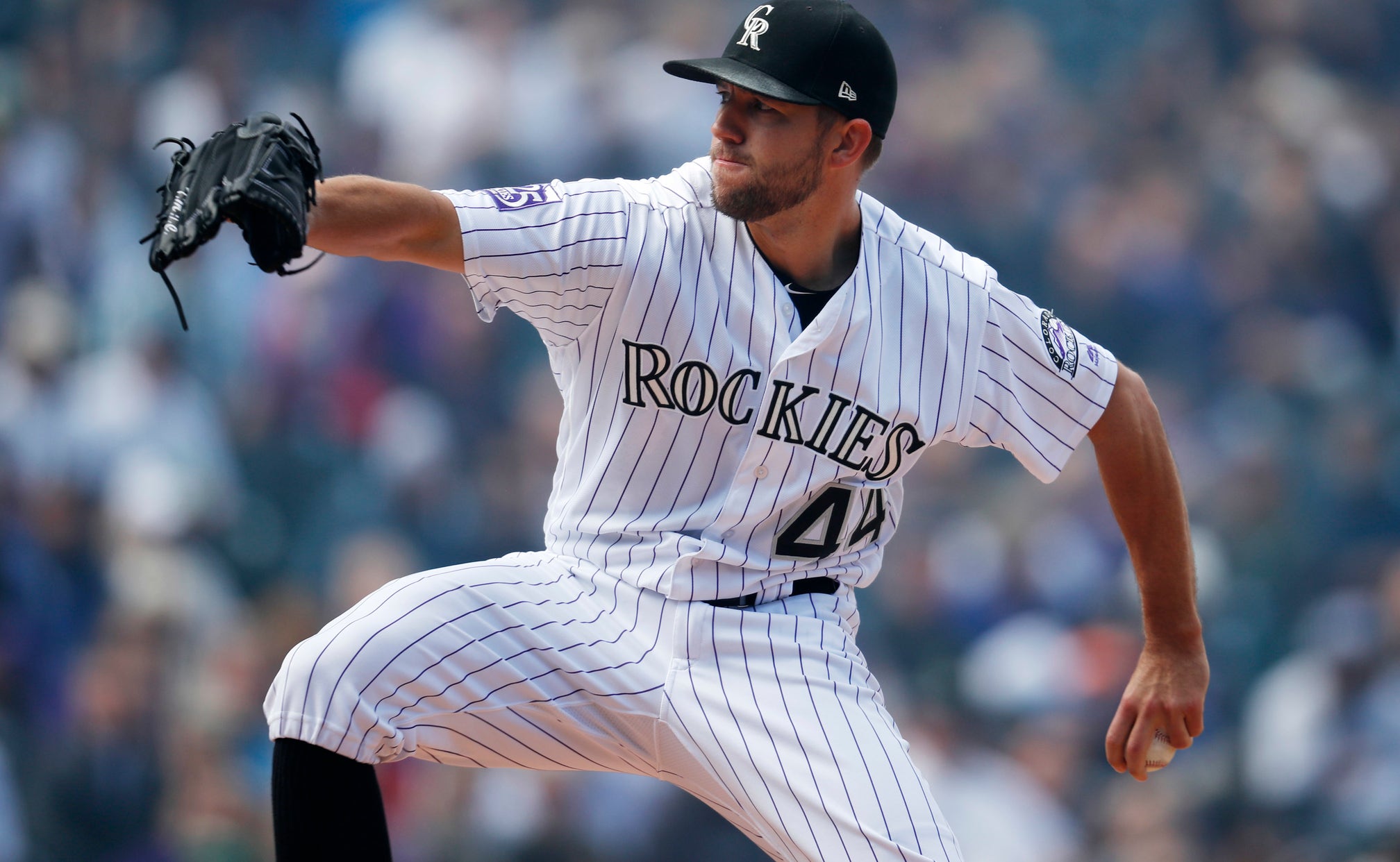 DENVER (AP) — Charlie Blackmon and his teammates walked around the field tossing T-shirts, replica jerseys, lunch bags and backpacks into the sellout crowd.

A more precious gift, though, remains up for grabs — an NL West title.

The playoff-bound Colorado Rockies are headed to Los Angeles for a tiebreaking game to decide the division crown after routing the Washington Nationals 12-0 on Sunday behind Blackmon's cycle.

"Not many times in our past have we had a chance to play for a divisional title this late in the season," Trevor Story said.

Tied atop the division with the Dodgers entering the last day, the Rockies won for the ninth time in 10 games, while Los Angeles routed San Francisco 15-0 to send the season to game 163.

The one-game tiebreaker will be Monday at Dodger Stadium, and the loser goes to the Chicago Cubs or Milwaukee for Tuesday's wild-card game.

Walker Buehler will start for the Dodgers as the defending NL champions try for a sixth straight West title. The Rockies will counter with German Marquez, who struck out eight straight to begin his last start.

"It's two of the best young starting pitchers in the big leagues pitching in this type of game," Rockies manager Bud Black said. "It's great."

Nolan Arenado hit two of the Rockies' five homers and took over the National League lead with 37, one more than teammate Trevor Story — who also went deep. David Dahl homered for the sixth time in seven games.

Blackmon finished his first career cycle and the ninth in Rockies history with a double in the eighth. He tripled in the first, homered in the third, singled in the fifth and struck out in the sixth.

"Charlie is a really hard worker and we understand how much work he puts in," Carlos Gonzalez said. "When he does something special on the field, we all feel really proud."

Tyler Anderson (7-9) didn't look the least bit bothered by a sore shoulder that sidelined him for about a week. He scattered four hits over 7 2/3 innings for his first win since July 4, combining with Seunghwan Oh and Chris Rusin on a five-hitter.

"He was efficient. He was throwing strikes in good spots. That's the type of game when he's on that he can throw," Black said.

Arenado got the Rockies rolling in the first, with a two-run shot off Erick Fedde (2-4), who was starting after the Nationals elected to skip NL Cy Young Award candidate Max Scherzer. Blackmon added a two-run drive in the third.

Fedde lasted four innings and gave up four runs in place of Scherzer, who wound up with a big league-best 300 strikeouts.

Colorado went 19-9 in September, one shy of the team record set in 2007, when the Rockies made a late surge, beat San Diego in a wild-card tiebreaker and reached the World Series for the only time, only to be swept by Boston.

Before the game, Story said he planned to do sneak peeks at the large scoreboard in right field to see how the Dodgers were faring. It wasn't pretty, as Los Angeles scored early and often.

"It was good to hear," Anderson said.

Anderson appeared iffy for this start after complaining of shoulder soreness that led him to be bumped from his outing last Monday. He steadily progressed throughout the week.

The left-hander was 0-6 with a 6.08 ERA over his past 13 starts. But he found his command and worked out of trouble courtesy of three double plays.

Arenado and Story hit back-to-back homers in the seventh to help the Rockies earn their 91st win of the season, which is the second-most in team history. The record is 92 turned in by the 2009 team.

Washington (82-80) finished with a winning record for a seventh straight season.

"The last two months have been fun. I enjoyed it," said Dave Martinez, who replaced Dusty Baker as manager last offseason. "Unfortunately my first year as manager is over and I'm looking forward to seeing my family."

Soon-to-be free agent Bryce Harper doubled in perhaps his final Nationals at-bat. He was 2 for 4 with two doubles.

Asked whether the outfielder remains in the team's plans, general manager Mike Rizzo said: "Of course he is in our plans. He's a guy that we would love to have."

Nationals: Open the 2019 season on March 28 against the New York Mets at Nationals Park.