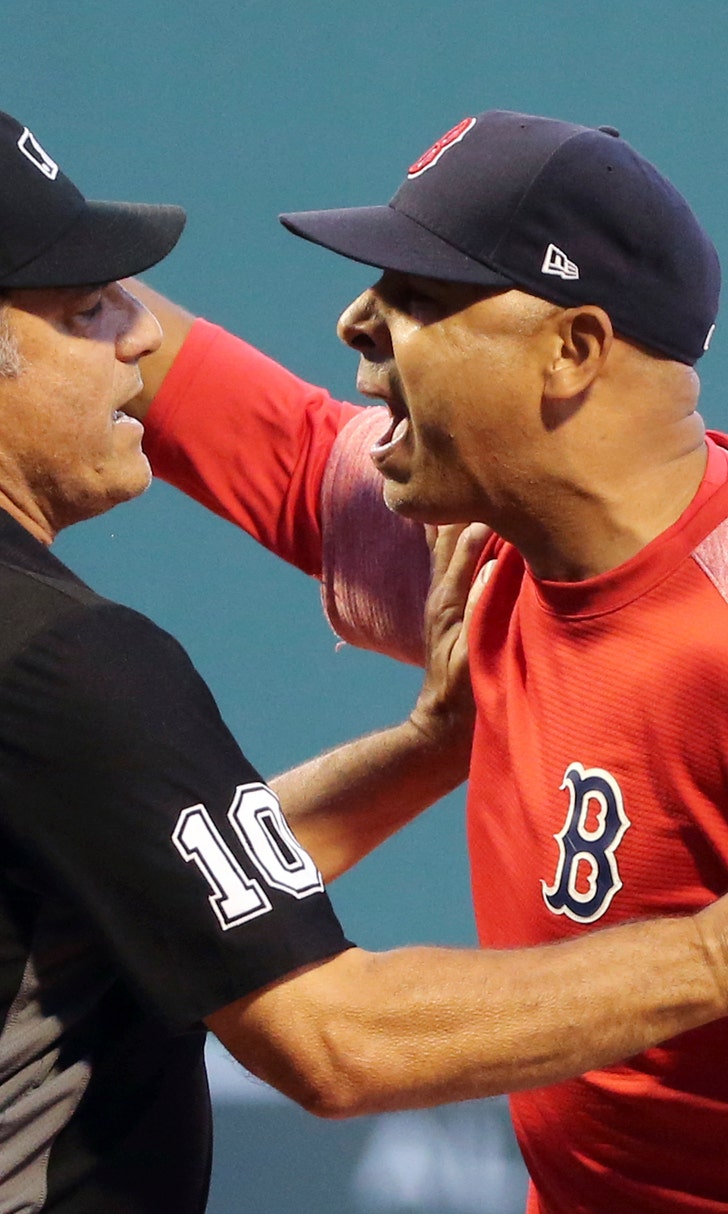 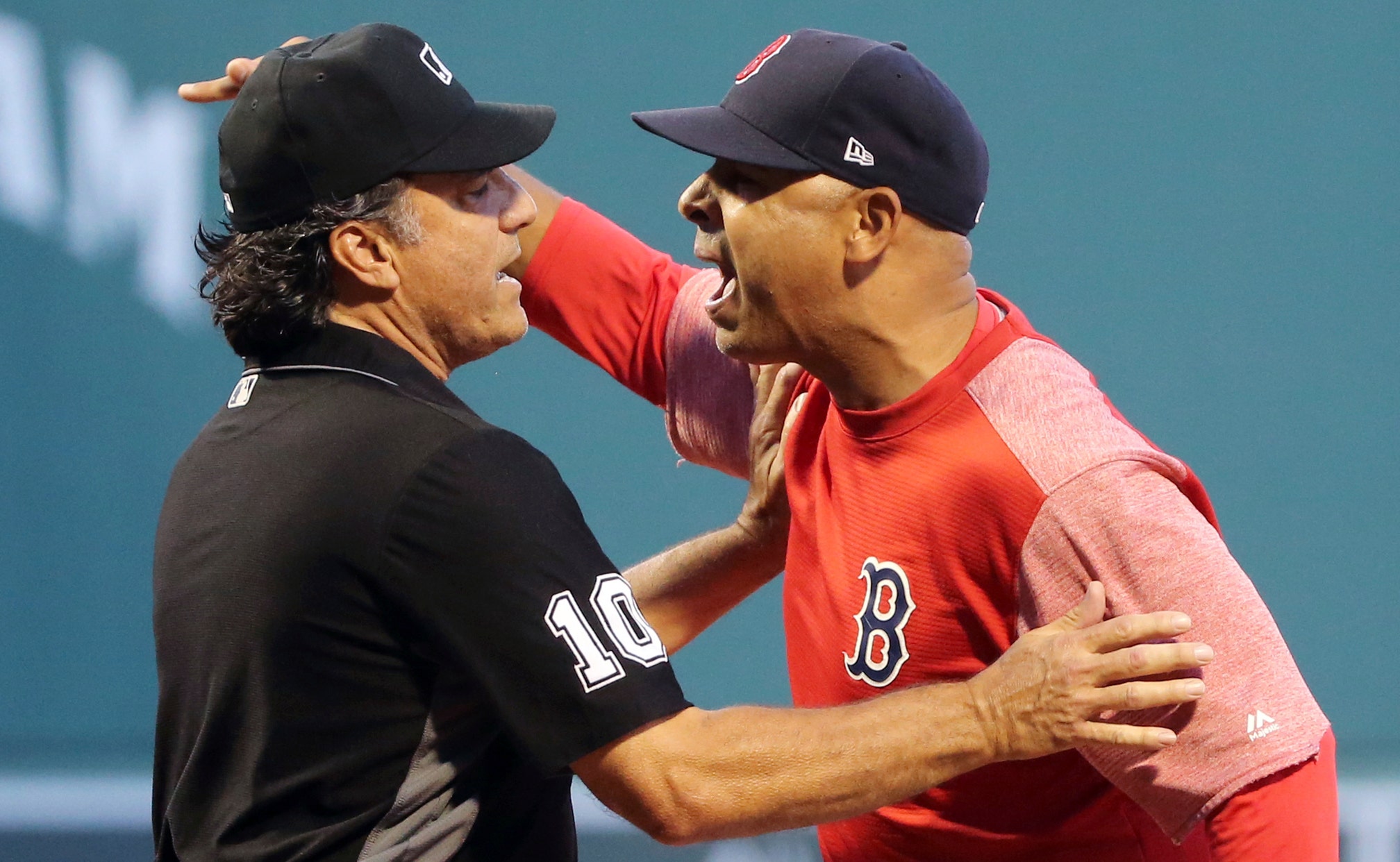 BOSTON (AP) — After Boston manager Alex Cora was ejected in the first innings, Rick Porcello ensured there was no need for further outbursts.

Porcello pitched a one-hitter, retiring his final 21 batters and striking out a season-high nine in leading the Red Sox over the New York Yankees 4-1 victory Friday night.

Cora was ejected one pitch into the bottom of the first.

"It definitely got emotional, but I think more than anything it probably fired us up and might have got us locked in," Porcello said.

Porcello walked none, faced one batter over the minimum and needed only 86 pitches in a game that took 2 hours, 15 minutes — the fastest nine-inning Yankees-Red Sox game since May 6, 1994. Steve Pearce homered for the fourth time in two nights, and the Red Sox won for the sixth time in seven games to open a season-high 7½-game lead in the AL East and at 77-34 moved 43 games over .500 for the first time since 1946.

Porcello hit Brett Gardner with an 0-2 pitch starting the game, and New York's Luis Severino (14-5) answered with a high-and-inside fastball when Mookie Betts led off the bottom half.

Plate umpire Adam Hamari warned both dugouts, and Cora came charging out of the dugout claiming it was retaliation for the pitch that hit Gardner.

"I understood the situation," Porcello said. "I definitely had it in the back of my mind form the moment that it happened, but you've still got to slow down and pitch a ballgame."

Severino said there was no intent on the pitch to Betts, other than to come inside.

Betts, who barely had a chance to get up and dust himself off before Cora was ejected, wouldn't speculate — or say openly, anyway — on Severino's intent.

Miguel Andujar's leadoff homer in the third was the only hit allowed by Porcello (14-4), who matched his season high for strikeouts and pitched his first complete game since July 23 last year.

"We're playing good ball. If we're not pitching well, we swing the bats well that night," Porcello said. "It's been a good run so far, but we've got a lot of baseball to play and we've got to keep going."

Porcello had a 3-0 lead after the first, when Andrew Benintendi doubled and Pearce, who homered three times Thursday, hit a two-run drive over the Green Monstert. Eduardo Nunez added an RBI single in the first, and Mitch Moreland singled in a run in the fifth.

"I wish I could have stayed in the dugout and enjoyed it from there," Cora said.

Severino (14-5) allowed four runs, seven hits and three walks in 5 2/3 innings, dropping to 0-3 in four starts since a July 7 victory at Toronto.

New York has lost three straight games for only the second time this year; Tampa Bay swept the Yankees from June 22-24.

"We're being tested to a degree, which is ultimately going to happen in a big league season," manager Aaron Boone said. "But the bottom line is we're still in position here to potentially have a special season."

Porcello got defensive backing in the ninth when Jackie Bradley Jr. made a leaping grab at the center-field wall of a Neil Walker drive for the second out. Betts switched from right field to take over at second base after Ian Kinsler injured his left hamstring while scoring in the first.

Betts, who had to move to the outfield coming up through the system because the Red Sox had a second baseman in Dustin Pedroia, was happy to return. Bench coach Ron Roenicke, running the Red Sox after Cora was ejected, had to shuffle his defense after the first.

"I've seen Mookie field ground balls before, and he's pretty darned good, so I actually felt pretty good about it," Porcello said. "I don't doubt anything that Mookie does anymore."

Yankees: RF Aaron Judge (broken right wrist) is getting closer to swinging a bat again, manager Aaron Boone said. Judge, out since taking a fastball from Kansas City right-hander Jakob Junis on July 26, could take some swings later this weekend in Boston or next week when the Yankees visit the Chicago White Sox, Boone said.

Red Sox: C Blake Swihart went on the 10-day DL due to a strained right hamstring.

Yankees: RHP Chance Adams is scheduled to make his major league debut Saturday. RHP Nathan Eovaldi (4-4, 3.80 ERA) gets his second start for Boston since he was acquired from Tampa Bay. Eovaldi threw seven scoreless innings to beat Minnesota in his Red Sox debut.