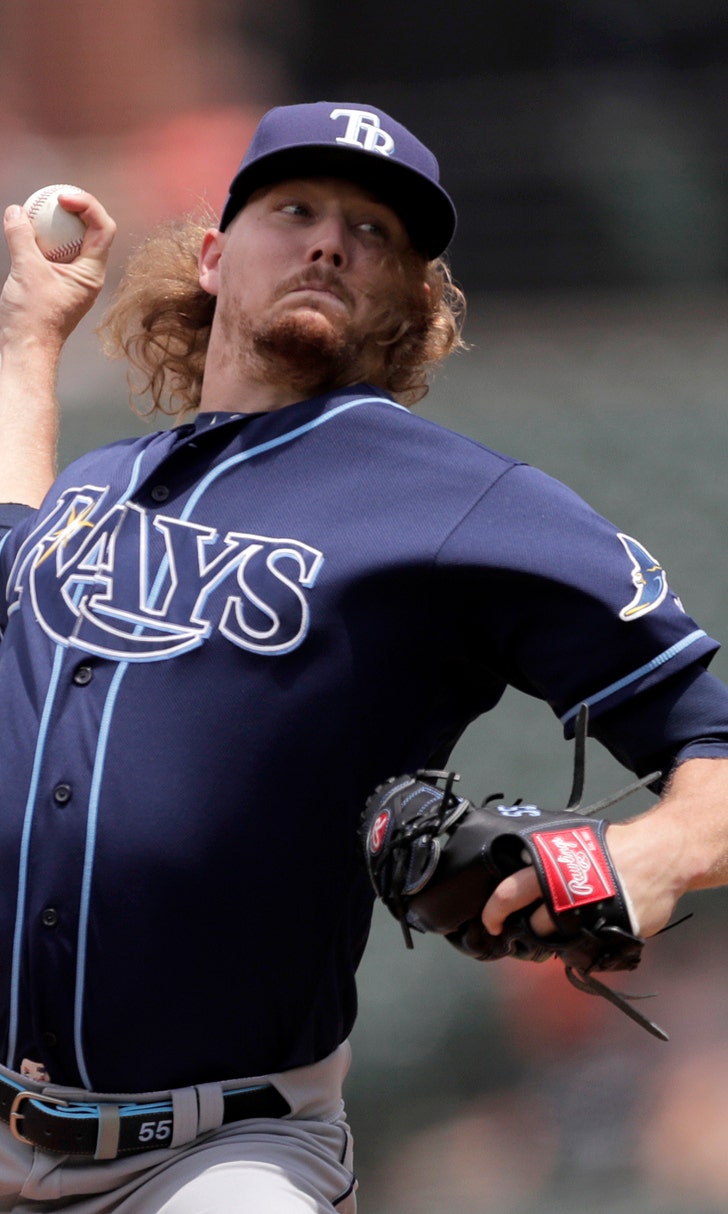 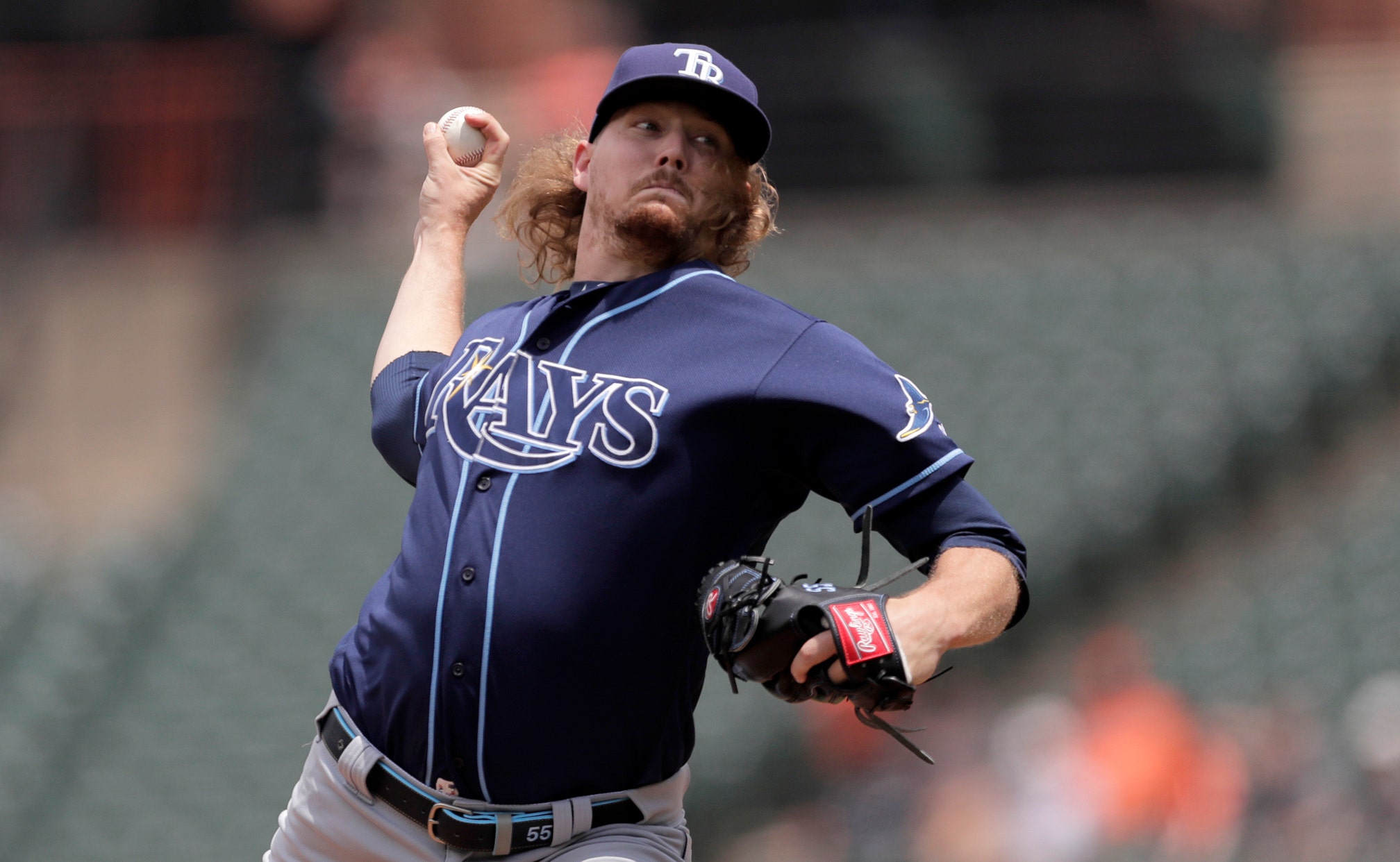 previous story
After a Tour on TV, Pinot now looms large in the picture
next story
Tigers plate 7 in 3rd, beat Royals 12-8 after Bailey trade

Perfect for 8 innings, Rays settle for 4-1 win over Orioles

BALTIMORE (AP) — Zipping through the Baltimore Orioles' lineup with incredible ease, Ryan Yarbrough was blissfully unaware of his role in a potentially historic performance until the Tampa Bay Rays left-hander was deep into the finest outing of his baseball career.

After taking over for Ryne Stanek in the third inning Sunday, Yarbrough was poised to be part of the major leagues' first combined perfect game.

"I was so locked in, not until I went out there in the eighth to warm up and I heard a kid yell, 'Don't blow it,' did I realize what the situation was," Yarbrough said.

Hanser Alberto beat the shift with a leadoff opposite-field single in the ninth inning, wrecking history in the making and taking some of the edge off Tampa Bay's 4-1 victory.

Mixing a cut fastball with a sinker and a deceptive changeup, Yarbrough was literally unhittable — until the ninth.

"Man, that would have been cool, but I can't get upset about the hit against the shift," Yarbrough said. "It has helped me so much in the past."

Tampa Bay's try for the combo perfecto came two days after a pair of Los Angeles Angels pitchers teamed up for a no-hitter while wearing the jerseys of late teammate Tyler Skaggs.

Though they've only got a total of 26 wins between them, Stanek and Yarbrough sure looked like All-Stars on this day.

"Both of them were really impressive," Rays manager Kevin Cash said. "Stanek was in the zone and established pitches, and Yarbrough came in and picked right up. A fun game to be part of."

The bid for perfection ended when the right-handed hitting Alberto — batting around .400 against lefties — pushed a grounder to the right side , precisely where the second baseman usually stands.

"Finally, we get it," Alberto said. "We were trying to get the whole game. He was pitching really good, a really good performance, pitching in and out."

Stevie Wilkerson followed with a single, and an RBI single by Anthony Santander off Oliver Drake enabled Baltimore to break up the shutout.

Emilio Pagan struck out Trey Mancini for his sixth save, and the Rays followed with an obligatory celebration that could have been far more enthusiastic had the team completed the perfect game.

"See if we can do it again next time," Cash said with a grin.

The franchise's only no-hitter was on July 26, 2010, by Matt Garza against Detroit.

Recalled from Triple-A Durham before the game, Yarbrough had already had three stints with Tampa Bay this season while shuffling between the minors and big leagues. In his last outing before this one, the lefty yielded six runs in five innings for Durham against Gwinnett.

This time, Yarbrough (8-3) was nearly perfect . Baltimore hit only five balls out of the infield against the 6-foot-5 southpaw, all of them becoming routine outs.

The only hard-hit balls against Stanek came in succession in the second inning. Pedro Severino hit a liner to second baseman Joey Wendle, who was standing behind the base as part of a shift to the left side of the infield

"Stanek was just dominating," Orioles manager Brandon Hyde said. "Yarbrough, that was the best I've ever seen him."

Brosseau and Austin Meadows homered off Tom Eshelman (0-2) as the Rays won three of four from the Orioles, who own the worst record in the majors.

It's been a tough season for Baltimore, but on this day the struggling team at least avoided making 27 outs without getting a man on base.

"I saw a little frustration from our guys, which is OK. They're showing some emotion about being embarrassed," Hyde said. "You're just hoping and wishing somebody is going to get a hit."

With Alex Cobb and Dylan Bundy on the injured list, the trade of Andrew Cashner has intensified a problem Hyde has faced all season: filling out the rotation.

The Orioles have used 15 different starters this season, and the shuffling probably won't stop any time soon.

"I've never had to deal with the rotation stuff we've had this year," Hyde said. "That's been challenging, piecing together a rotation instead of rolling out five guys. We've had just a mixed bag of, who can do this now?"

Rays: Cash offered no update on RHP Tyler Glasnow, who has been out since May 11 with a strained right forearm. He was eligible to come off the 60-day IL on July 10.

Orioles: Bundy (right knee tendinitis) should be ready to return on July 23 after spending the minimum time on the 10-day IL, Hyde said.

Orioles: After taking Monday off, the Orioles begin a two-game series with the neighboring Washington Nationals on Tuesday night.