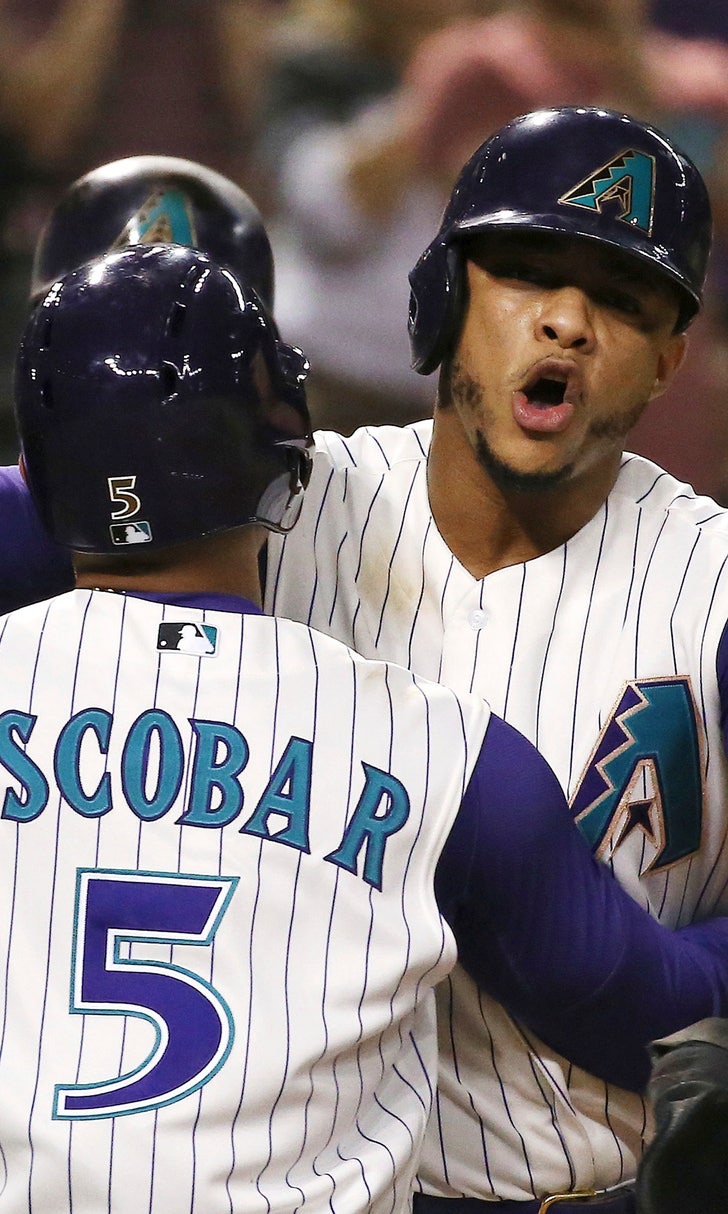 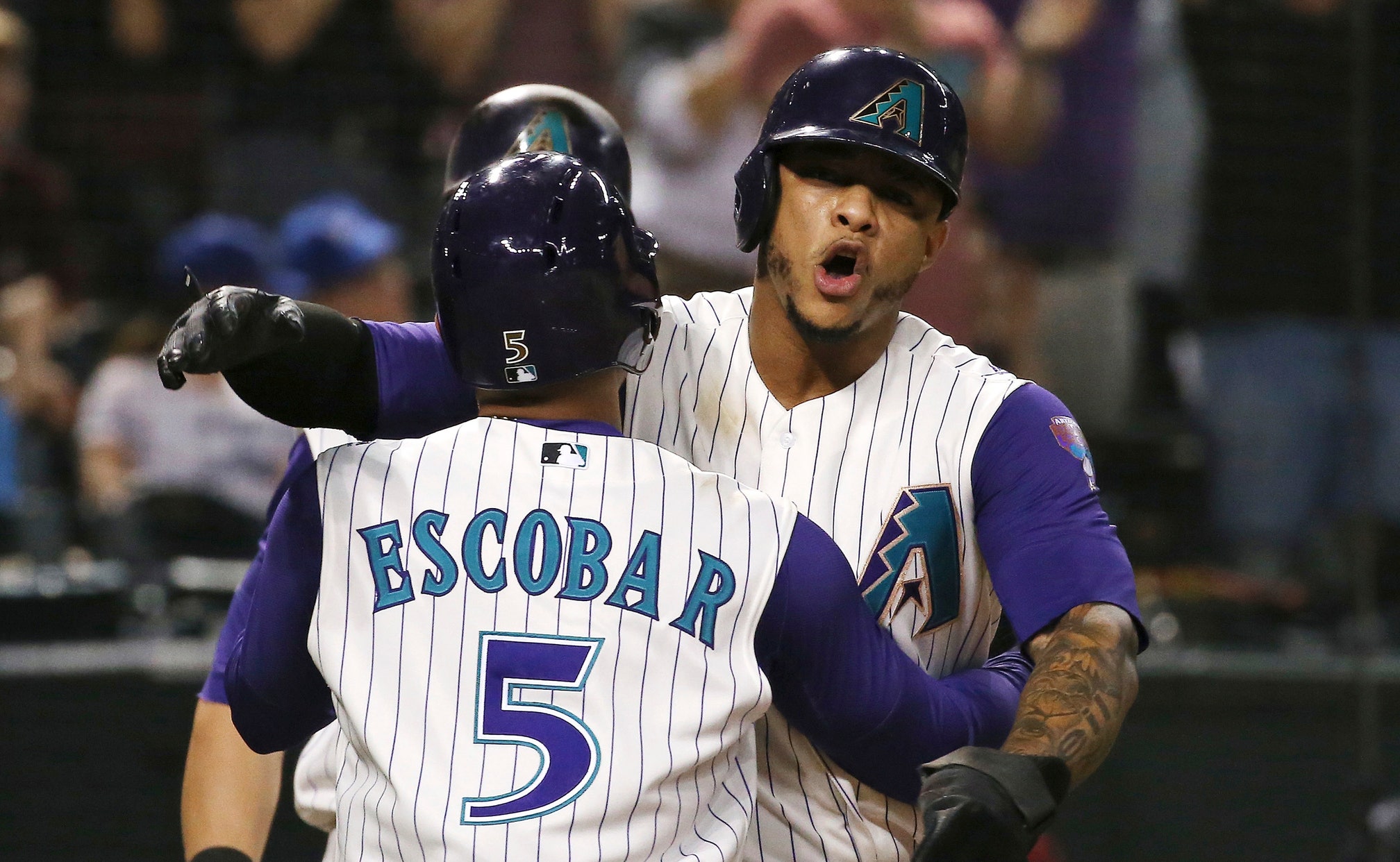 PHOENIX (AP) — Eduardo Escobar joined an elite class Thursday, and Arizona knocked around one of the top pitchers in the National League.

Escobar became the fourth switch-hitter in major league history with at least 30 homers, 20 doubles and 10 triples in the same season when his three-run homer in the sixth inning highlighted the Diamondbacks' 11-5 rout of the Los Angeles Dodgers and nemesis Hyun-Jin Ryu.

"You're putting him in company of some of the all-time great switch-hitters, one in particular by the name of Mickey Mantle," Arizona manager Torey Lovullo said.

"When you are getting mentioned in the same breath as Mickey Mantle, you know you are doing something pretty darn good."

Wilmer Flores had three hits and three RBIs, Nick Ahmed had two hits and two RBIs and Adam Jones had a two-run double as Arizona overcame a 3-0 deficit by scoring seven runs in the third and fourth innings off top Cy Young candidate Ryu, who tied season highs in runs and hits allowed (10).

The Diamondbacks knocked Ryu out with five consecutive hits with two out in a three-run fifth after the Dodgers.

"Compared to the first three innings, they seemed to be swinging the bat different and thinking about contact as compared to something big," Ryu said through a translator.

Ryu (12-5) had won his previous three starts against Arizona this season while giving up one run in 20 innings. He has given up 18 runs in his last 14 2/3 innings over three starts, pushing his league-leading ERA to 2.35, the first time it has been over 2.00 since May 12.

"Come-from-behind wins are fun, especially against a good team like that," Ahmed said. "Their best pitcher on the mound, the best pitcher in the National League. We fight and claw and figure out a way to score a lot of runs and beat him.

"We used the whole field. He is not a guy who throws a lot of fastballs right down the middle. He mixes a lot and hits his corners. We hit all different kinds of pitches."

Justin Turner homered, doubled and had three RBIs and Joc Pederson had two hits and scored twice for the Dodgers, who had won six of nine. The Dodgers' magic number to clinch their seventh straight NL West title remained at nine.

"There were a handful of pitches that leaked back to the big part of the plate," Dodgers manager Dave Roberts said of Ryu. "I understand it is three in a row, something he hasn't done all year, but it's not too far off."

Matt Andriese (5-4) gave up one run in one inning of relief but was the beneficiary of the three-run fifth inning, picking up the victory.

Arizona has won four in a row and seven of 10. The Diamondbacks remained 4 ½ games behind the Chicago Cubs in the race for the second NL wild card.

Turner had sacrifice fly in the first inning, and the Dodgers used four walks by Arizona starter Merrill Kelly and Turner's RBI double to score two in the third inning for a 3-0 lead before Ryu fell apart after hitting Tim Locastro to open the fourth inning.

The Dodgers' remain on pace to pass the 1975 Cincinnati Reds as the quickest to a division title in major league history in both date and games played since division play began in 1969.

"Once we (clinch), then we'll talk about it," manager Dave Roberts said. "Right now we're just trying to beat these guys."

The 1902 Pittsburgh Pirates hold the record, having clinched the NL pennant on Sept. 2.

The Dodgers have no plans to change bullpen roles during closer Kenley Jansen's recent struggles, manager Dave Roberts said. Jansen has blown seven save changes this season, tying a career high, and he has converted only four of eight save chances since the All-Star break.

"With Kenley, it is hard to back off any less," Roberts said before the game. "This is as little workload as he has had in the last four years. We just have to keep running him out there. He still has to go out there and make pitches. We're going to need him. We're counting on him."

Jansen wild-pitched home the tying run while failing to hold a 4-3 lead in the ninth inning in a 6-4, 10-inning victory at San Diego on Wednesday. He has given up eight runs in 12 1/3 innings since July 16, and opponents are hitting .302 against him in that stretch.

Arizona outfielder Tom Locastro was hit by a pitch to open Arizona's four-run fourth inning, becoming the first player in major league history to have been hit 18 times in his first 200 plate appearances of a season, according to Sportsradar.

"Definitely a cool little feat, but I think the bigger part of that was that inning," Locastro said. "Got the inning started, and the guys behind me continued it.

Diamondbacks: LF David Peralta (right shoulder AC joint) is scheduled to undergo surgery to have loose bodies removed by Reds team physician Dr. Wayne Kremchek on Friday. ... RHP Luke Weaver (forearm strain) is to throw all pitches in an aggressive bullpen session Friday, manager Torey Lovullo said. Weaver, out since late May, is expected to return in a bullpen role in September. ... RHP Taijuan Walker (right capsule strain) played catch at 120 feet Thursday and is to throw off flat ground Friday. He is unlikely to return this season. ... CF/2B Ketel Marte was removed in the seventh inning after suffering a hamstring cramp in Arizona's previous game Tuesday.

Dodgers: RHP Tony Gonsolin (2-1, 2.74) will make his fifth major league start after holding the Yankees to one run and two hits Saturday. He lost to the Diamondbacks in his major league debut on June 26, giving up six runs (four earned) in four innings in an 8-2 loss.

Diamondbacks: Rookie RHP Zac Gallen (1-1, 2.56) will make his second career appearance against the Dodgers. He gave up one earned run in 5 1/3 innings of a 2-1 loss to the Dodgers on July 19 while with Miami.