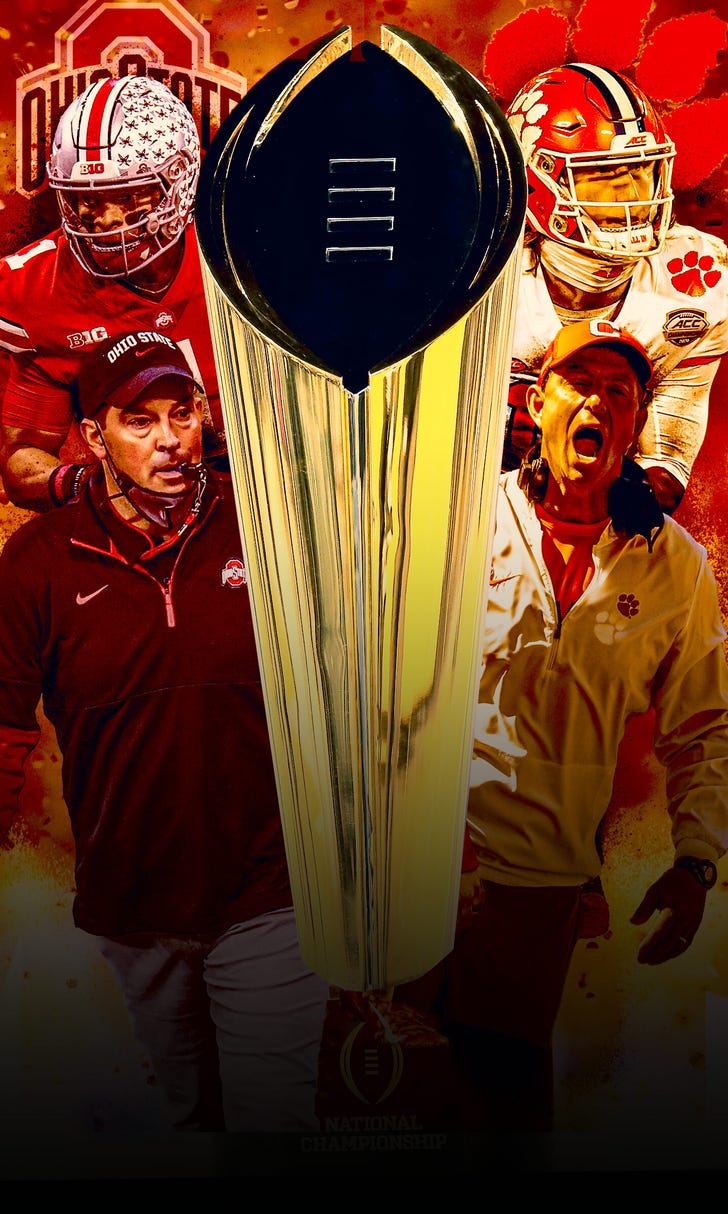 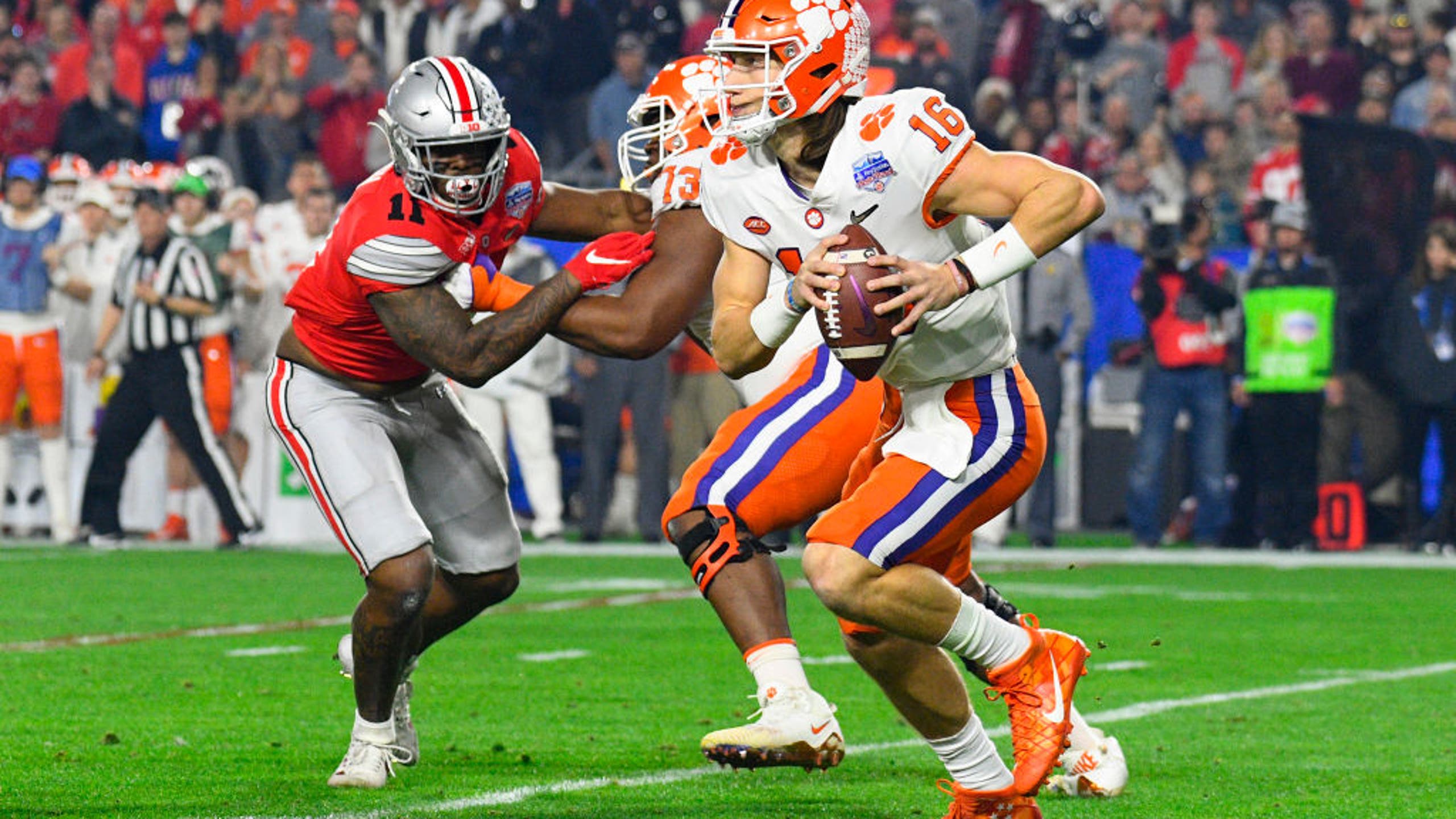 Ryan Day doesn’t believe you could make this up.

Despite a world full of storytellers, including many who chronicle the sport for a living, the Ohio State coach is certain no one could have concocted the circumstances, obstacles and challenges to create the five-act structure that brought us all to this moment. 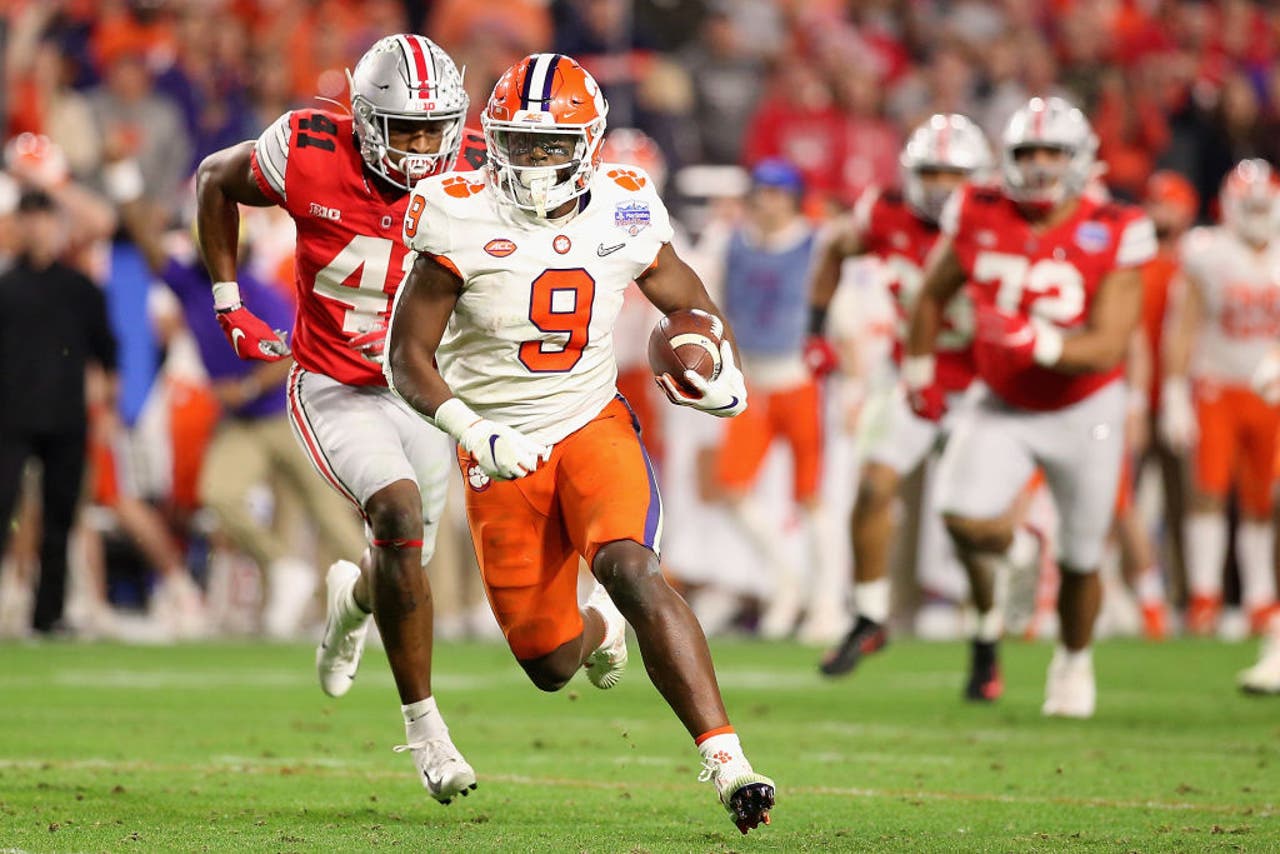 "I mean the journey that we’ve gone on as a program to get back to right here, to have another chance to play Clemson and this game is like nothing we know, you can't even make it up. I mean, some of the best storytellers of all time couldn't come up with a story. But here we are."

In a year when almost nothing has been predictable; a year when so much has been left to chance; a year when even the prospect of a regular college football season was in doubt — and even canceled outright in two of the Power 5 conferences — most folks would have rightly predicted Dabo Swinney’s Clemson Tigers and Day’s Ohio State Buckeyes would be two of the four teams invited to the College Football Playoff.

The details have been hashed out with the No. 2 Tigers facing off against the No. 3 Buckeyes in the Sugar Bowl in New Orleans.

Now, the principals are about to take center stage once again, in what has become a heated rivalry among the two programs. 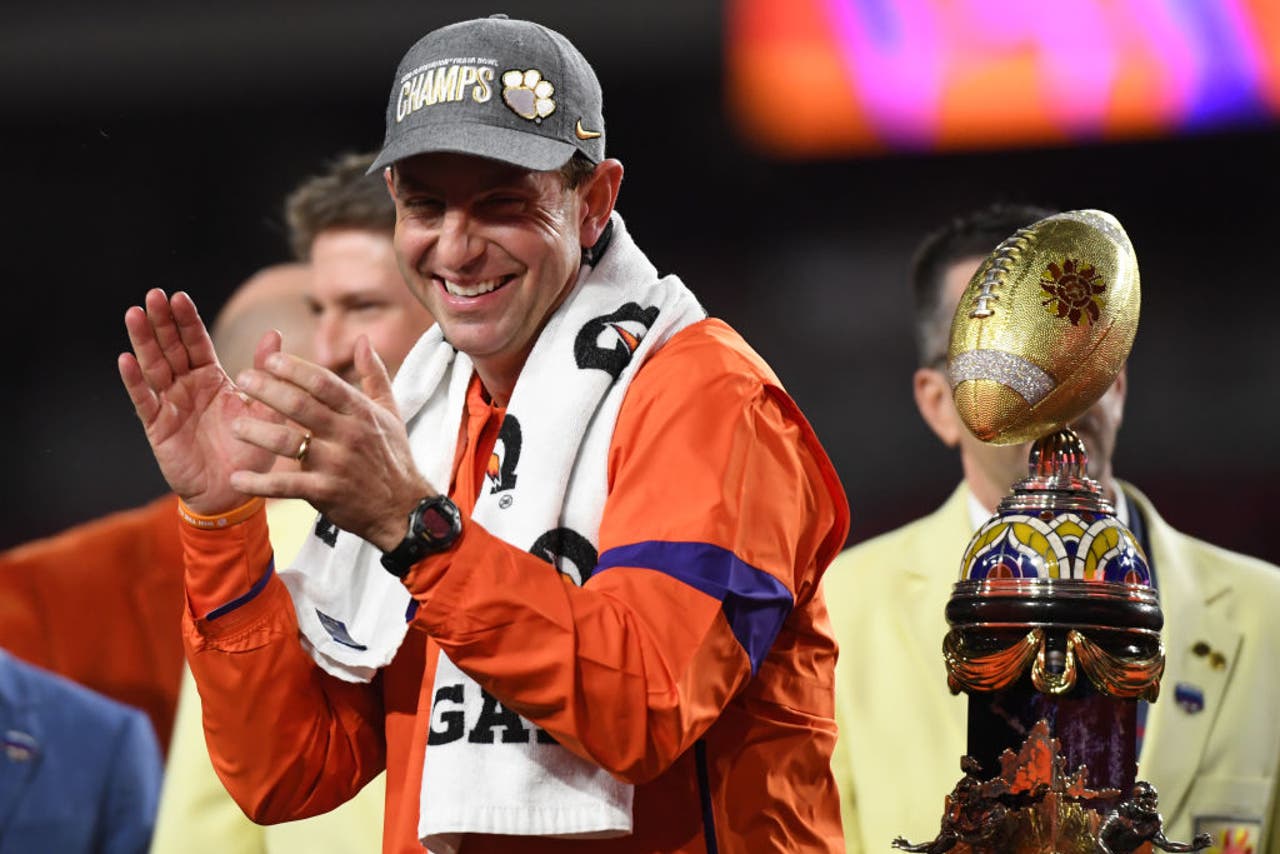 Tigers coach Dabo Swinney hasn't held back when asked about the Buckeyes' inclusion in the College Football Playoff despite playing only six games.

Oh, how accurate he is.

In both 2016 and 2020, they met in the Fiesta Bowl with a national championship spot on the line. Each time, the Tigers have cracked the Nuts, and each time, Clemson’s mental advantage over the Buckeyes has grown.

In the 1978 Gator Bowl, Clemson edged the Buckeyes 17-15 for the program’s first-ever 10-win season, while dealing Ohio State its third loss. The game in Jacksonville is not remembered for Clemson’s triumph, but for legendary OSU coach Woody Hayes’s rage. 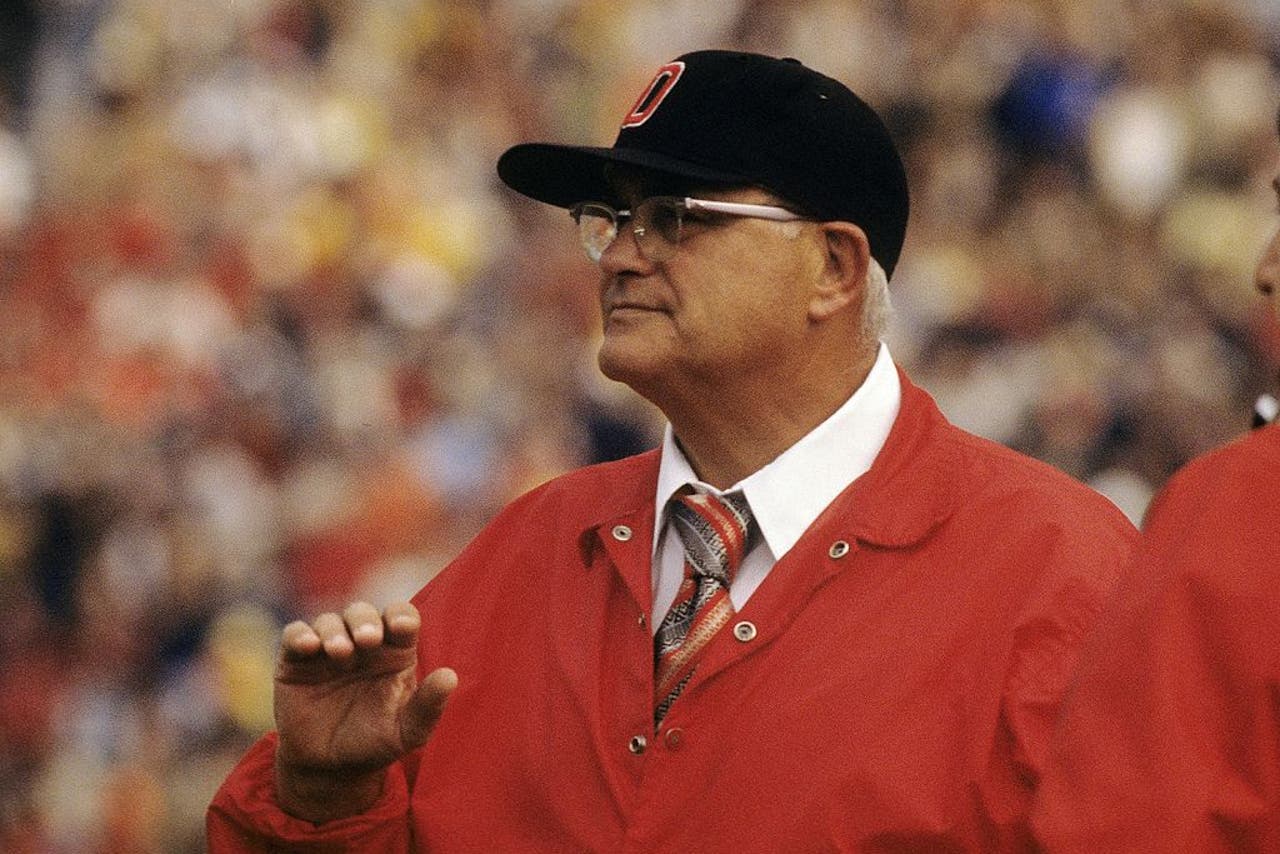 Legendary Ohio State coach Woody Hayes made an unceremonious exit from the game after the Buckeyes' 1978 Gator Bowl loss to Clemson.

After Buckeyes quarterback Art Schlichter threw a pass that was picked off by Charlie Bauman, the Clemson nose guard was tackled by Schlichter near the Ohio State sideline. Hayes approached the Tigers defender, reared back and punched Bauman in the throat.

Clemson and Ohio State have been trading blows on the field every year since. And the Tigers have not just come out on top, but enjoyed the status once claimed by the Buckeyes as one of the two best programs (Alabama being the other) of the last decade.

Last season's meeting in the desert was a back-and-forth classic.

Clemson managed to stave off a late comeback by quarterback Justin Fields and the Buckeyes with just seconds left on the clock. Fields threw a pass where he expected receiver Chris Olave to be. Olave slipped, and the last pass Fields threw that season was intercepted.

Since then, Fields and the Buckeyes have done everything in their power, including publicly campaigning to play this season, after the Big Ten announced its cancelation, so they could get right back here for the playoff, and a chance to win a national title. This is what they’ve worked for, sweated for, thought about most when discipline waned and their resolve might have been questionable, and here is where we get to the ...

Despite strict COVID-19 protocols and missed games this season, the Buckeyes have clawed their way to a 6-0 record and a Big Ten Championship. But not everyone believes Ohio State was worthy of Playoff selection, including Swinney.

In the latest barb between these two programs, Swinney compared OSU’s abbreviated season to finishing half the credit hours needed to receive a four-year degree.

On Sunday, Swinney was candid about his team having played nearly twice as many games as Ohio State with just 11 days to heal before playing again.

"I mean, there's nobody out there that would that would say somebody who's played 11 games, or somebody who's played six is better physically or something like that," he said, "because it's a long season, and we've been going, we're going on Week 21. And these guys have had no break. I mean it's been a grind, not just football-wise, but the mental challenge in the personal sacrifice and commitment that everybody's had to make, to be able to play and continue to play."

And push the narrative toward its ...

The Buckeyes played their last two games with various combinations of missing starters on both sides of the ball and against the only ranked opponents they’ve faced, Fields has played his worst football. The OSU secondary is suspect, and the Buckeyes have looked anything but invincible this season. 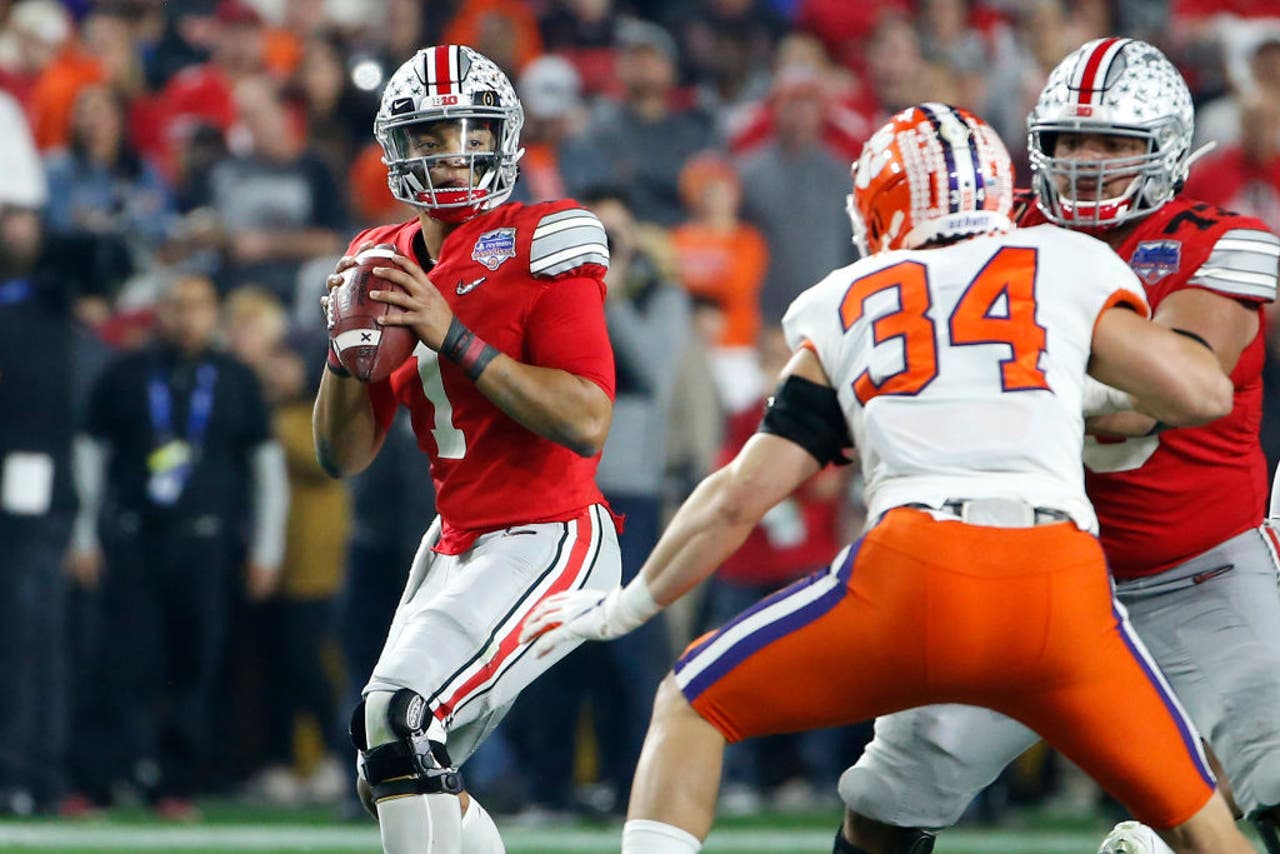 Justin Fields would love to get back that final pass he threw against Clemson in the 2019 Fiesta Bowl.

They’re here now, though, in the Playoff, preparing to face a Clemson team that proved just as vulnerable without the likes of quarterback Trevor Lawrence and missing three starters on its defense in the only loss the Tigers suffered this season.

"But we’re at our best right now," Swinney said. "This is the healthiest we’ve been by far."

Which leaves no excuses for Clemson or Ohio State as we reach the ...

With two quarterbacks who will both almost certainly be drafted at the top of the first round of the upcoming NFL Draft, and two teams who have an intense history, and a spot in the national championship on the line, could the underdog Buckeyes finally defeat the powerful Tigers? Well, it has been an almost unpredictable season — almost.

"And we wanted, once that game was over, we wanted to get back here," Day said. "And how we got back here is just amazing."

That’s what the playoff game is for.