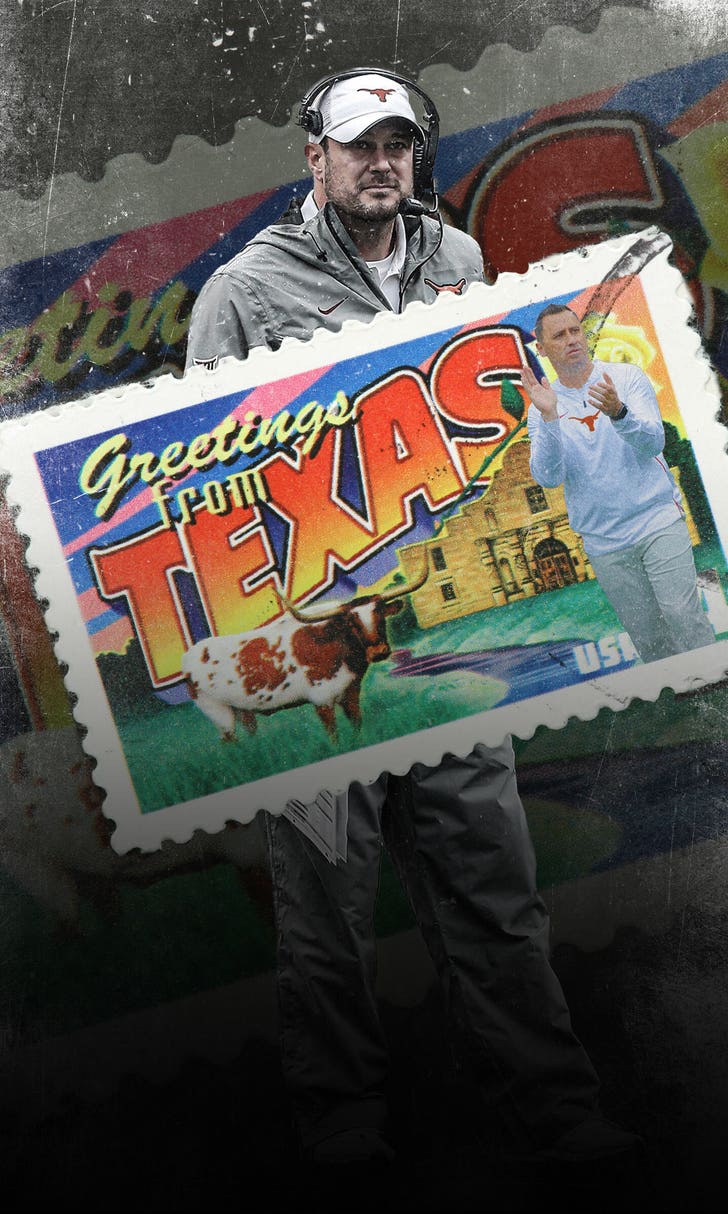 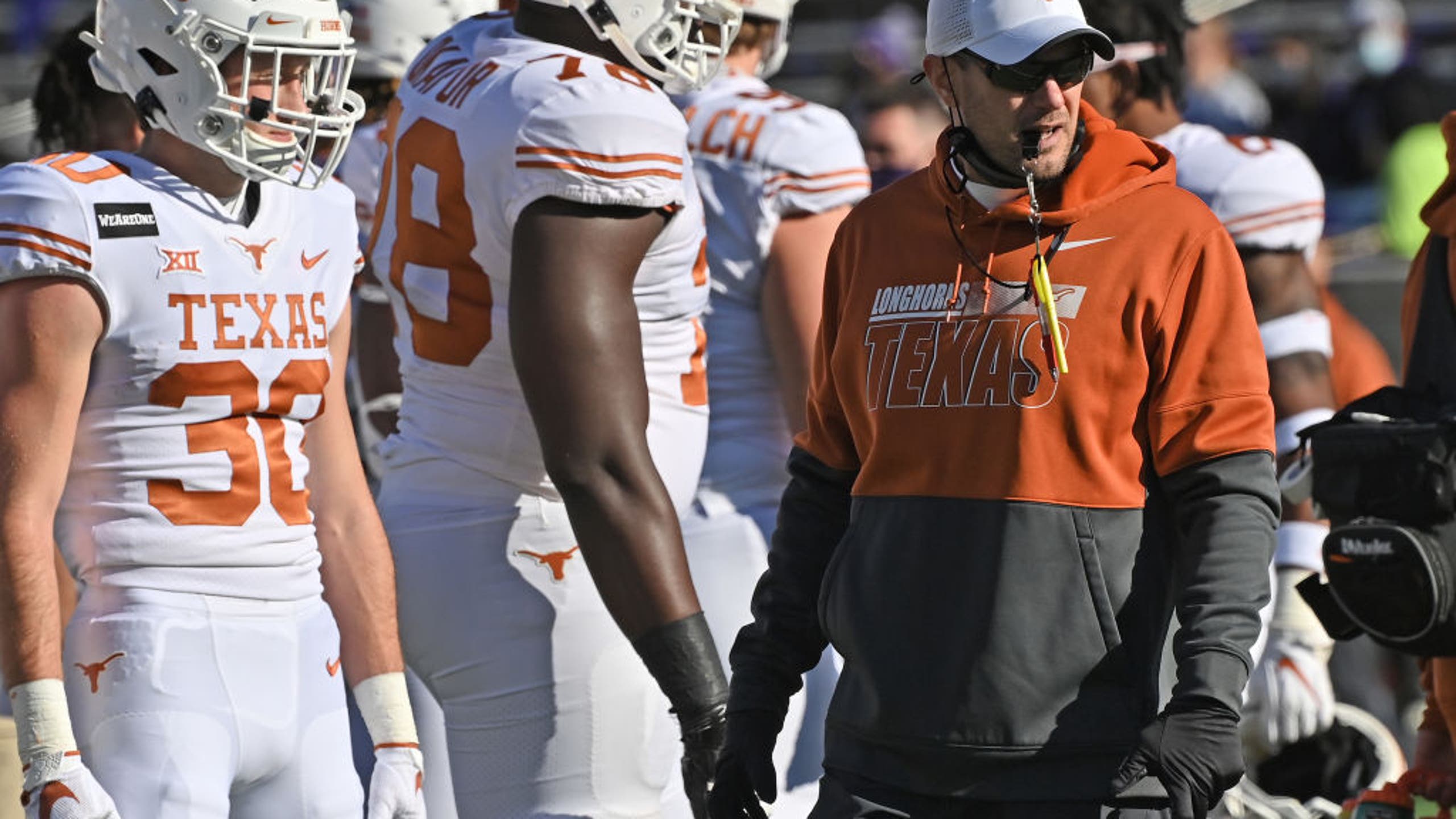 The morning after Alabama’s offense rolled Notre Dame in a College Football Playoff semifinal, the University of Texas fired coach Tom Herman and replaced him with the Tide’s offensive architect.

After reportedly striking out on its first choice in Urban Meyer, Texas brass targeted Alabama offensive coordinator Steve Sarkisian as the Longhorns' next coach. Given Sarkisian's background and the performance his offense has displayed in 2020, the hire makes sense and could work.

Sarkisian’s offense features three Heisman finalists, averages 48.2 points per game, and boasts four players among the starting 11 who could be first-round picks in the 2021 NFL Draft.

In Sarkisian, UT sees what it expected from Herman when he took the job in 2017. Now, they’re buying out Herman after four seasons and a 32-18 record in Austin. 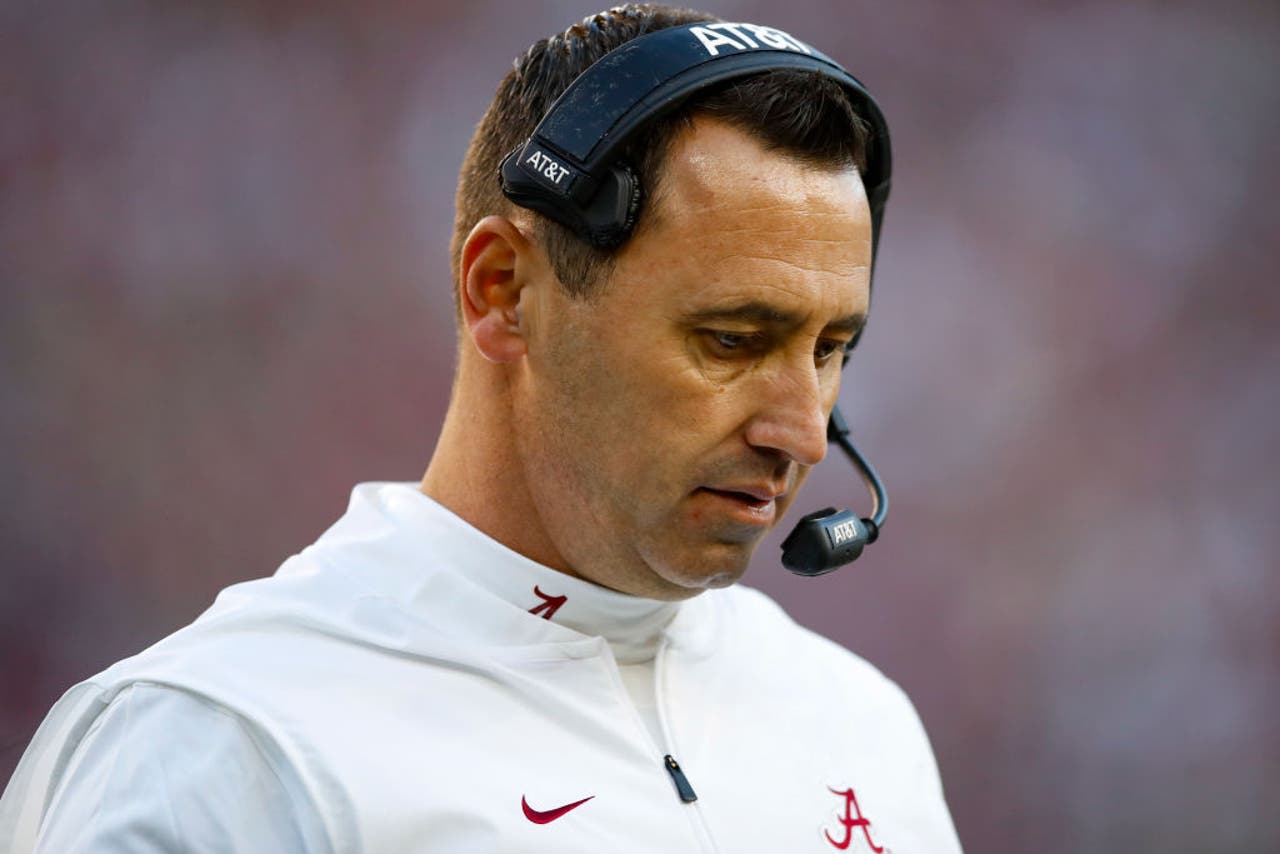 Steve Sarkisian's offense at Alabama has been the most explosive in the country, showing a knack for developing top NFL talent.

WHAT WENT WRONG WITH HERMAN?

In April 2016, eight months before taking the Texas job, Herman spoke to a crowd of students at the University of Houston.

He was proud of how he’d ended up at one of the most moneyed programs in college football. He told those students, though, that he had not made more than $40,000 annually until he reached his 30s.

Among the stops Herman made along the way as an assistant were Sam Houston State, Texas State, Rice and Iowa State. Then, as reported in the Austin American-Statesman, he dropped a joke that rings more like a harbinger for his fortunes at Texas.

"Did a three-year sentence in Ames, Iowa," he said. "Anybody been to Ames, Iowa? Yeah, it’s awful. Siberia."

Texas lost to both Iowa State and Texas Christian in back-to-back years during Herman’s last two years at UT. And he had lost the fan base.

Texas boosters were frustrated by Herman's 1-4 record against rival Oklahoma, including a four-overtime loss to the Sooners in October.

While Herman was 4-0 in bowl games, including an impressive 55-23 victory over Colorado in the 2020 Alamo Bowl, he was never able to wrest the Big 12 title away from Oklahoma, which has won the conference six consecutive times.

Herman took over a program that had endured three losing seasons, and he was seen as the only man Texas could get to return the Longhorns to the glory of the Mack Brown era.

He’d gone 22-4 in two years at Houston with a 13-1 season in 2015 and a victory over a top 10 Oklahoma team. He was just three years removed from winning a national title as an offensive coordinator at Ohio State and had built a reputation as an outstanding play-caller.

After going 7-6 in his first season at Texas, he led the Longhorns to their best season in nearly a decade in 2018. Texas finished that year 10-4, with a win against No. 7 Oklahoma, an appearance in the Big 12 Championship Game and a Sugar Bowl victory over Georgia.

Many thought Texas was about to turn the corner. The Longhorns finished No. 3 in the 2019 recruiting cycle, and that class was meant to become the backbone of Herman’s program.

Two years later, the highest-rated member of that class, Bru McCoy, transferred to USC, while others have yet to blossom into the kind of players who look like Day 1 NFL Draft selections. Tom Herman couldn't lead Texas out of the shadow of Big 12 power Oklahoma or prove that he could develop top NFL talent.

For Herman, that developmental track record has been the toughest hurdle to overcome.

Texas hasn’t produced a first-round NFL Draft pick since 2013. During Herman’s tenure, just nine Longhorns have been drafted, and players who walked onto the Forty Acres with first-round talent seemed to regress.

Linebacker Malik Jefferson was rated a five-star recruit and the No. 10 overall player in the country in the 2015 class. He was selected in the third round in 2018. Defensive back DeShon Elliott was a blue-chip player coming out of high school, too. He was a sixth-round selection.

Devin Duvernay was rated the No. 37 overall recruit, the fifth-best wideout in the country and fourth-best player in the state of Texas in the 2016 class. He fell to the third round of the 2020 draft.

Recruits, like fans, see the level of talent that has signed with Texas over the last half-decade and rightly wonder why those players aren’t being developed to their full potential.

"They were close," Wilson said. "I’m not going to lie. The official visit made me think about them a little more. In the end, I’ve watched a lot of people go to Texas with a ton of ability and maybe not achieve what I thought they could. I didn’t want to be one of those guys."

After previously committing to Texas in August, Quinn Ewers, the No. 1 player in the 2022 class and quarterback at in-state power Southlake Carroll, decommitted two months later when Herman’s Longhorns began the 2020 season 3-2 with losses to Oklahoma and Texas Christian.

In November, Ewers committed to play for the Buckeyes, along with the 2022 cycle’s No. 1 wide receiver, Caleb Burton, in what has become a Texas to Ohio pipeline. Ohio State has mined Texas for talent such as Wilson, running back J.K. Dobbins, cornerback Jeff Okudah and others in the past.

The next coach will be tapped to not only cut off that pipeline and reroute it back to Austin, but to develop the players who commit to Texas.

The expectation is to develop NFL talent, win Big 12 championships and compete for national titles.

But Herman's record against his rivals, his struggles in recruiting and his poor track of NFL development weren't the only issues in Austin.

There was also the question about whether Herman had failed to keep his team unified, with critics pointing to a controversy surrounding the school's fight song.

Following Texas' loss to OU, senior quarterback Sam Ehlinger was one of the few Longhorns to remain on the field for the playing of "The Eyes of Texas."

More than 18,000 people signed a petition reinforcing their position that players should remain on the field during the song, and an "I Stand with Sam" banner was flown above Darrel K. Royal-Texas Memorial Stadium during a game.

Herman’s inability to keep his team from fracturing was a symptom of just how much of the squad did not trust him. When the quarterback and team leader is standing alone and the head coach has no public answers for why that is, change is needed.

IS SARK THE MAN WITH THE PLAN?

Still, there are those within the program asking why Sarkisian is Herman's replacement.

"Sark’s just gotta find a way to win and people will be on board," a former UT player told FOX Sports.

In 2015, Sarkisian was fired for cause for incidents within the USC athletic department related to his use of alcohol, including public incidents. When his behavior became somewhat erratic with missed appearances, or worse, embarrassing displays at booster events, then-USC athletic director Pat Haden felt he was left with no other choice than to let him go.

Sarkisian found his way to Nick Saban’s coaching staff as an analyst in 2016, and was unexpectedly promoted to offensive coordinator just before the 2017 national championship game after Saban fired Lane Kiffin from the post.

Sarkisian then spent two years as the offensive coordinator for the Atlanta Falcons and returned to coordinate Alabama’s offense in 2019. Those two NFL years, coupled with his success at Alabama, make him a capable leader for a Texas program thirsty for championships. 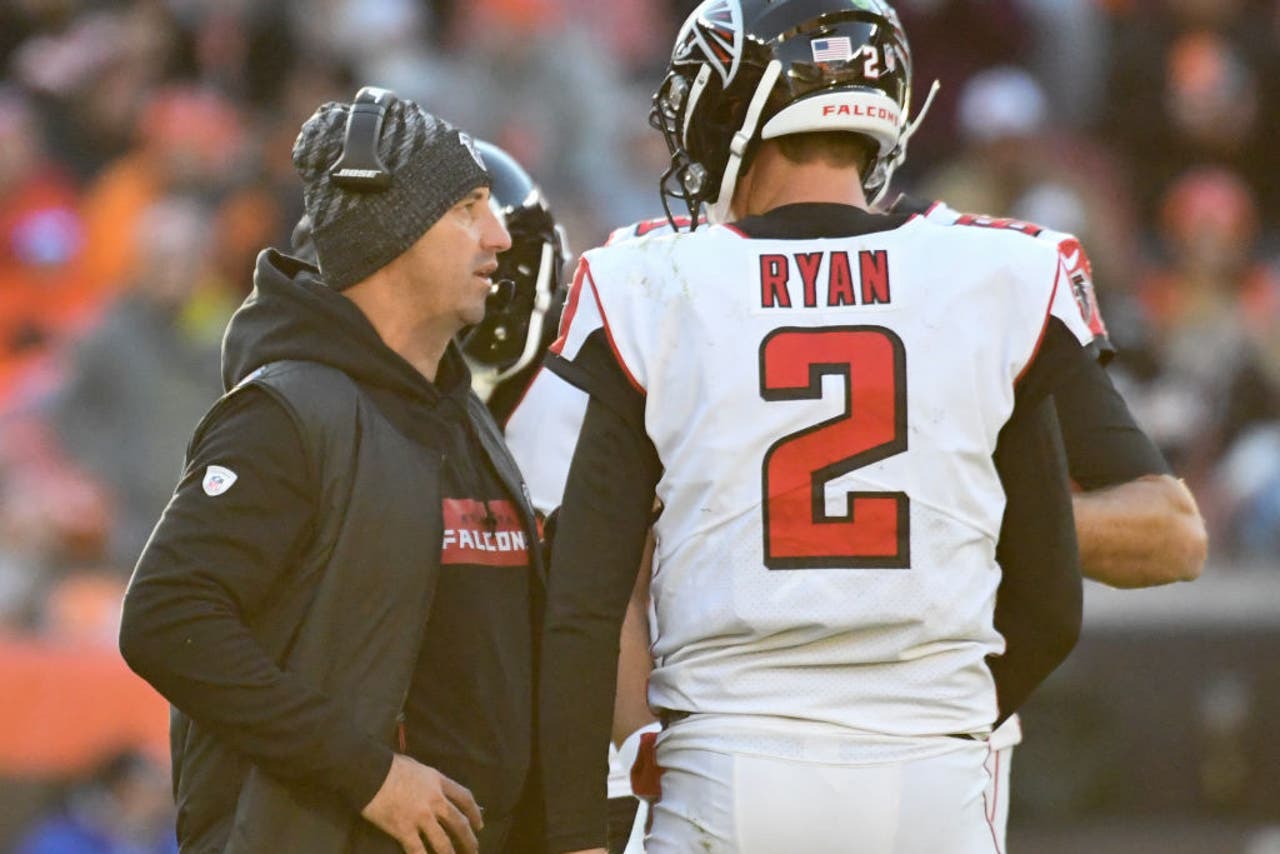 Sarkisian's time working with top offensive talent, such as Matt Ryan in Atlanta, should bode well for him in Texas.

Sarkisian understands the caliber of player needed to win at the college and professional level having coached Matt Leinart at USC, Jake Locker at Washington, Matt Ryan, Julio Jones and Calvin Ridley at Atlanta. In the last two seasons alone, four of the players he coached were selected in the first round — in the first 15 picks.

While his record as a head coach is mediocre (46-35), Sark has proven to be a great developer of offensive talent. If he can surround himself with a talented staff, the Longhorns might do more than make some noise. They could contend for championships.

But there’s one more reason UT hasn’t performed to expectations other than talent development, and that reason is in Norman, Oklahoma.

Oklahoma has owned the conference since 2015. Texas has won just three Big 12 titles since the league’s inception in 1996.

In fact, Texas has won just six conference titles since 1990. Mack Brown was head coach for two of those, and that is where the expectations arise.

Before Brown and Vince Young won the 2005 title, the last claimed national title UT won came in 1970 — the same year Julius Whitter became the first Black letter winner in football at Texas. In 2020, the Longhorns unveiled a statue to commemorate Whitter’s feat just before losing to Iowa State at home for the first time since 2010.

A decade later, the program is still searching for the man who can return it to its 2005 national championship glory, and there is no doubt Sarkisian will have the resources necessary to achieve success.

In 2021, Sark can start by beating Oklahoma and getting a talented UT team to the Big 12 Championship game for the first time in three years.

In 2022, the Longhorns will be expected to win the league and contend for a national title. That’s what the job is at Texas.

Mediocrity is not tolerated long, even if the talent doesn’t measure up to that of a Playoff contender. And that’s the reason the job is so daunting and the reason it has continued to take good coaches — from Charlie Strong to Tom Herman — and force them out.

Sarkisian will be walking into a position, a fan base, an administration that is unreasonable in its pursuit of championships. He’ll have to meet unreasonable with unprecedented success early and often to stay.

Top 10 Heisman Contenders For 2021
RJ Young takes a super early look at which players could compete next season for college football's highest honor.
9 hours ago