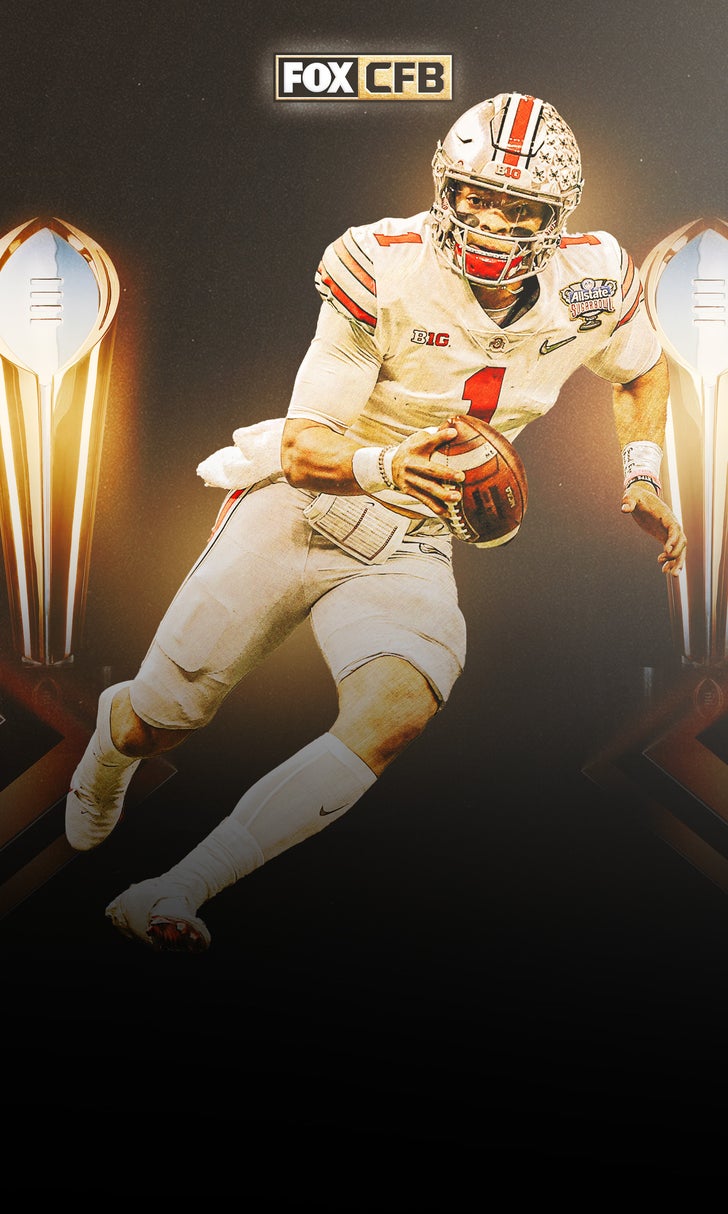 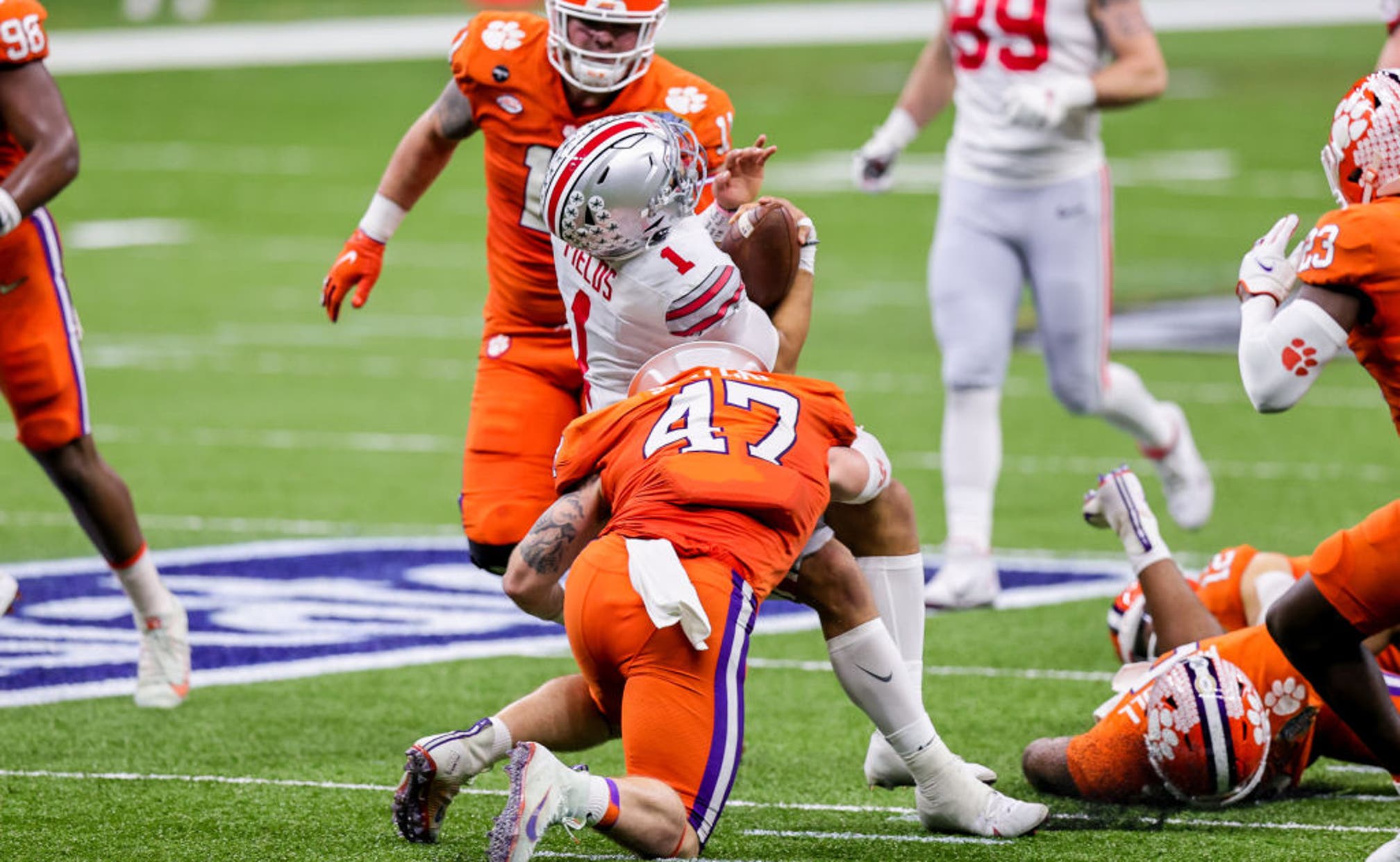 Ohio State quarterback Justin Fields sat with the media for the last time ahead of the third-ranked Buckeyes’ matchup with No. 1 Alabama in the national championship game and basically repeated himself.

You don't think you'll be affected at all?

"I'll be good by Monday night."

After enduring a vicious hit to the torso when Clemson linebacker James Skalski led with the crown of his helmet, Fields was slow getting up in the Sugar Bowl.

Watching him in obvious pain, a mind wanders to the lower, left leg injury Fields suffered against Michigan in 2019 only to come back into the game, and complete a pass rolling to his left in the back of the end zone to wide receiver Garrett Wilson. 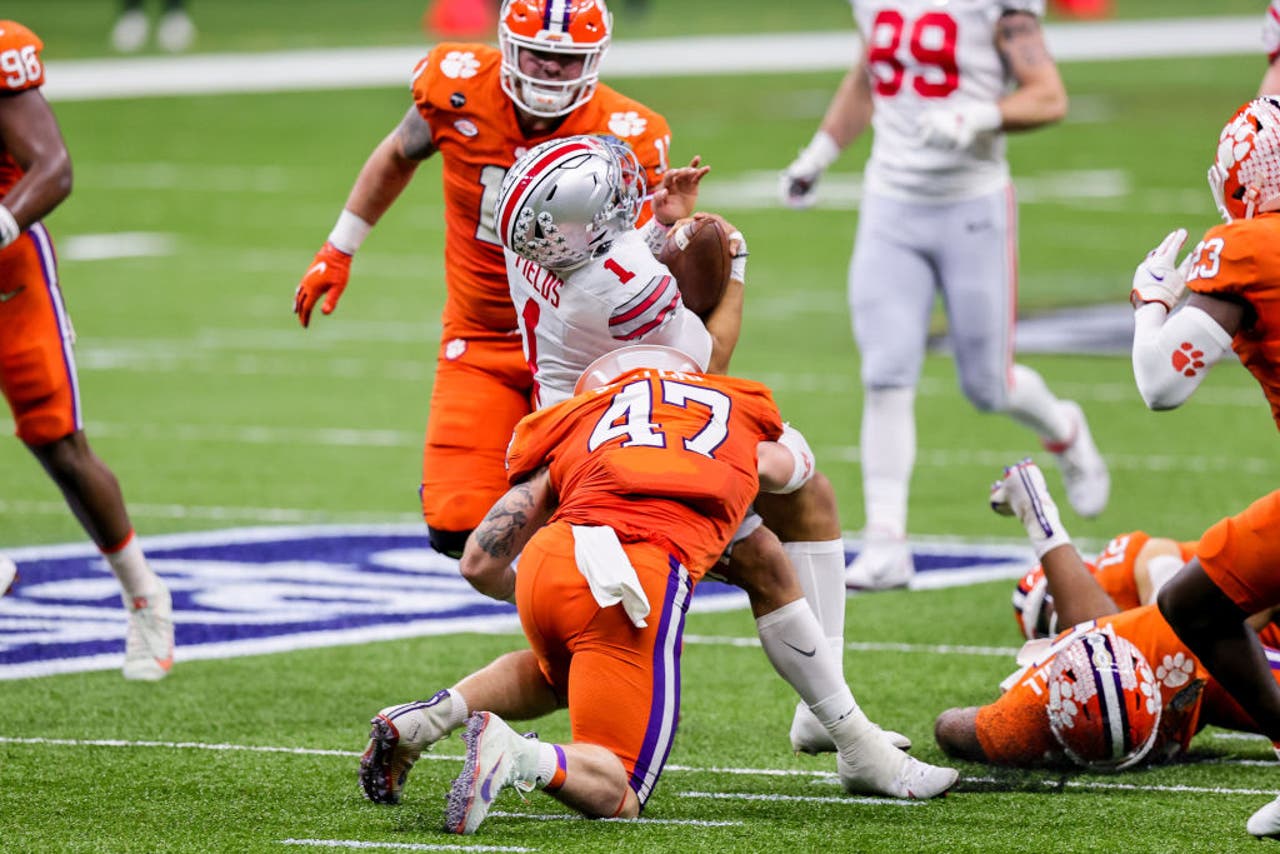 Following this hit by Clemson's James Skalski, Justin Fields played the game of his life to lead Ohio State to a national championship date with Alabama.

Or the thumb he sprained in the Big Ten Championship game against Northwestern last month that led to an almost verbatim citation leading up to the College Football Playoff semifinal game.

At times during the first half against Clemson’s defense, Fields did not look like he could protect himself. He could barely carry out a fake on run play, and he was in obvious pain on the sideline when the Buckeyes defense was on the field.

But he wanted to play, and Ohio State coach Ryan Day made clear that decision was not up to him.

"I mean, Justin isn't treated any differently than any other student-athlete," Day said. "Our medical people are the best in the country at what they do.

"They identify what's going on. They communicate with the player. They diagnose what happened and then make the decision on whether he's able to go back in the game. That's what happened here."

Fields left no doubt about his resolve by playing for the remainder of the national semifinal with an apparent injury, an injury that remains deliberately unspecified by him or Day. 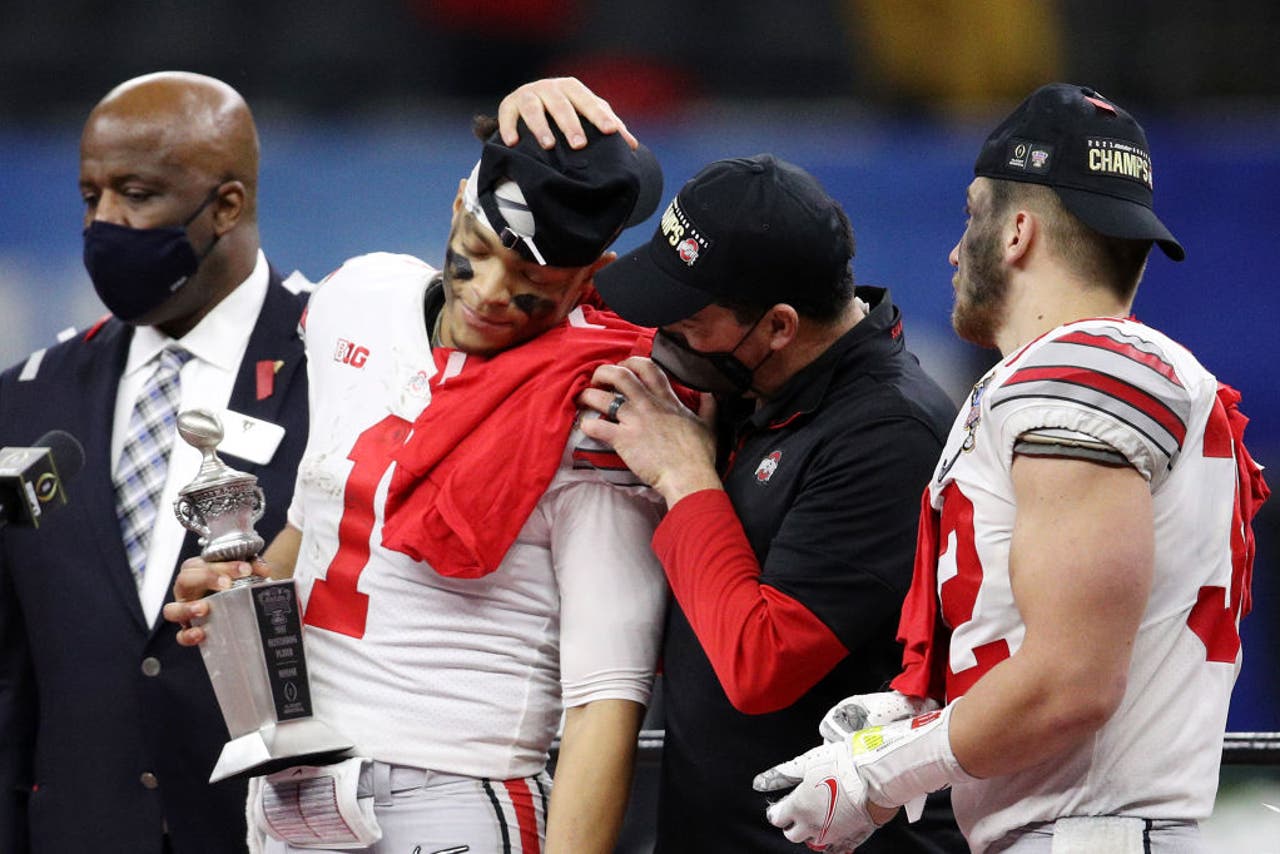 Buckeyes coach Ryan Day says the team's medical staff -- not Fields -- made the decision that the QB was able to return in the Sugar Bowl.

He did not question their advice or expertise in the moment. His injury was handled exactly as he wished it would be.

"I just put my full trust in those guys, and I see how they deal with guys here," Fields said, "and I have personal relationships with all of them. I just don't want anything I've said in the postgame interview to kind of get taken out of context and to be like, 'Oh, they just shot him up and sent him back out there.'

"No, it wasn't like that. I think they did a full, I guess, analysis of my injury and how it was, and they thought — they did what they thought was best. Yeah, I was fully comfortable with that."

Such confidence and resolve easily gives way to cliché. Whatever it takes. Leave it all on the field. Give 110 percent. He’s a gamer.

Each of those misses the essence of what is and has been at stake for Fields and each of the men who will play the last college football game of their lives and perhaps see their last chance to win a national title.

The sport is great because boys become men in the five years they get to play four. Most arrive barely legal voting age and leave not only legal drinking age, but with plans to marry, to have kids or as parents themselves.

The sport is great because their time to stand in this sunny window called college football is so short. In this, they are living the football lives that can serve to elevate them to the stature of not just story but legend.

The sport is great because Fields, a future top five NFL Draft selection, a budding millionaire in a few months’ time, is not hesitating to play. He left a school in Athens, Georgia, to play at one in Columbus, Ohio.

He relived the last past he threw in 2019 ending not with a touchdown but with an interception, against the same opponent in the national semifinal. He watched the conference he plays in cancel his season and then used every resource available to him to lead a campaign to reverse that decision.

He waited an addition two months to start his season in November knowing he and the Buckeyes would have to run the table undefeated just to earn a chance to play for the title. He saw one of the sport’s great head coaches rank him and his teammates 11th for reasons completely out of the team’s control. 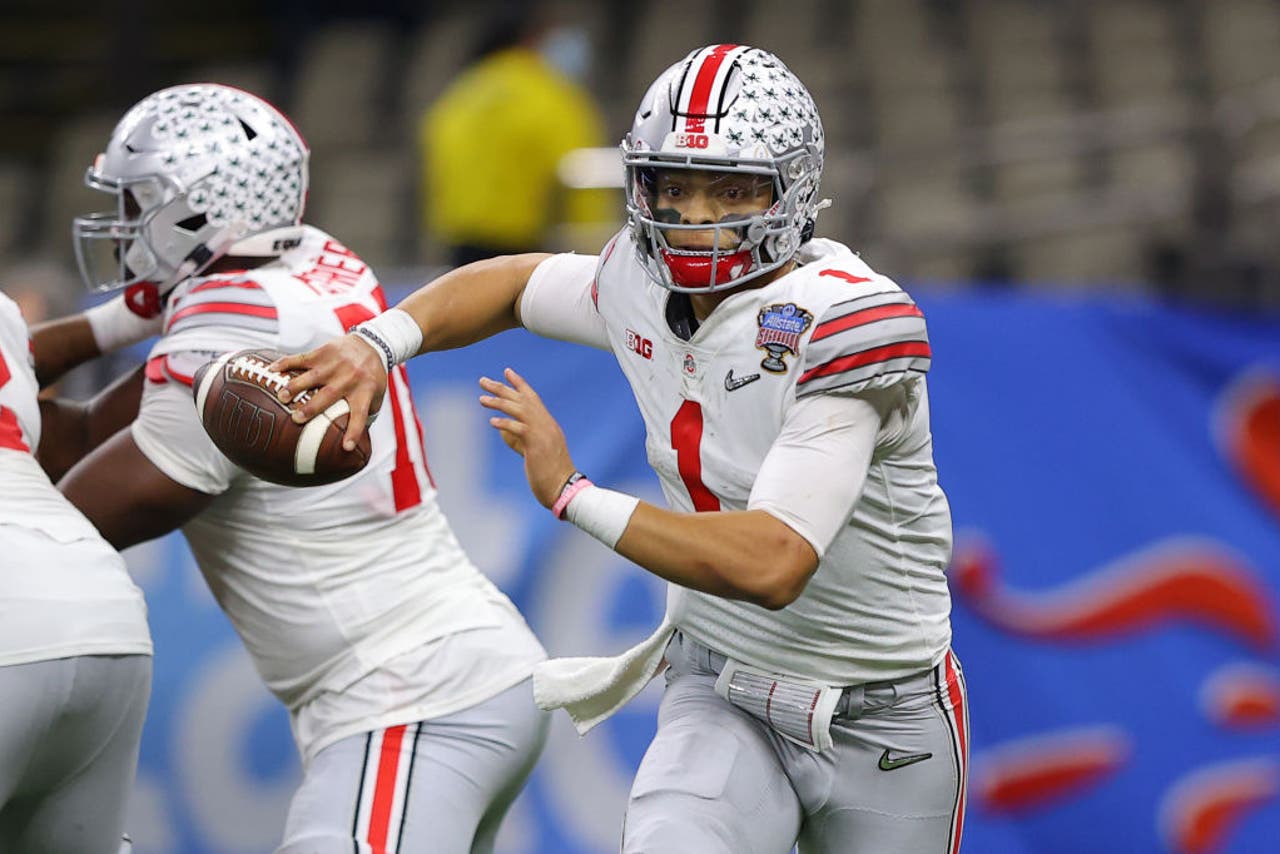 Fields isn't thinking about the first-round of the NFL Draft right now. He's thinking only about winning the title.

Believe Justin Fields when he talks.