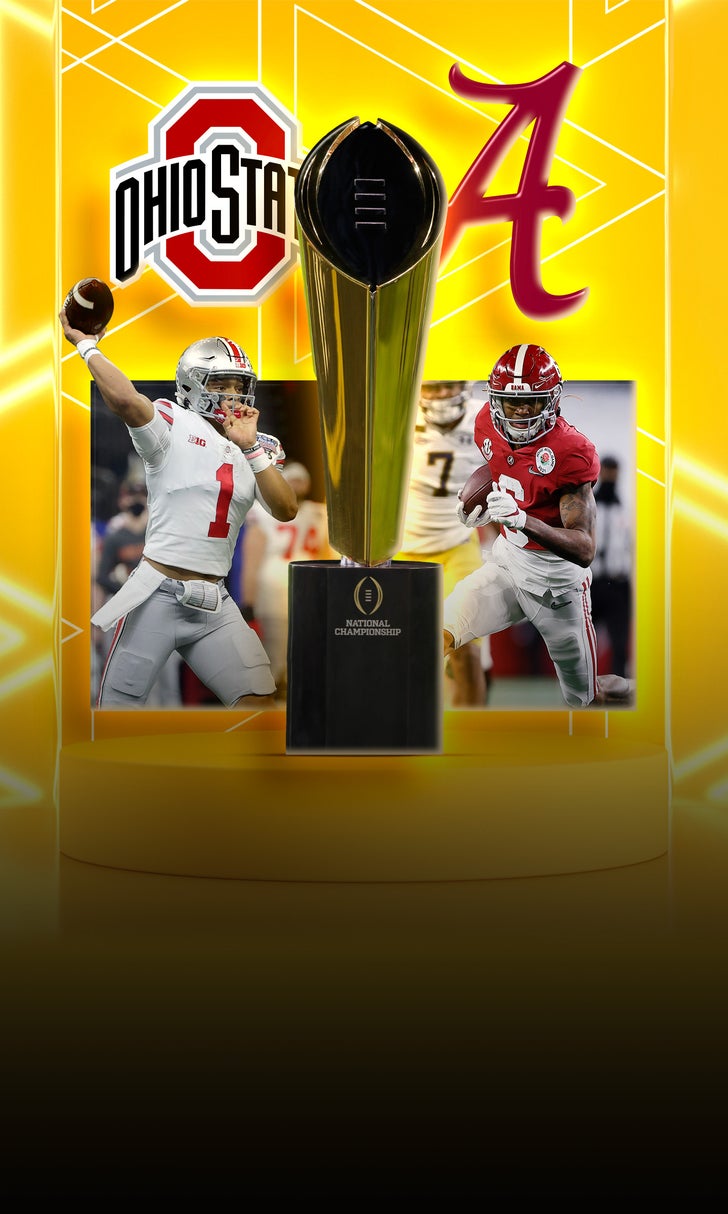 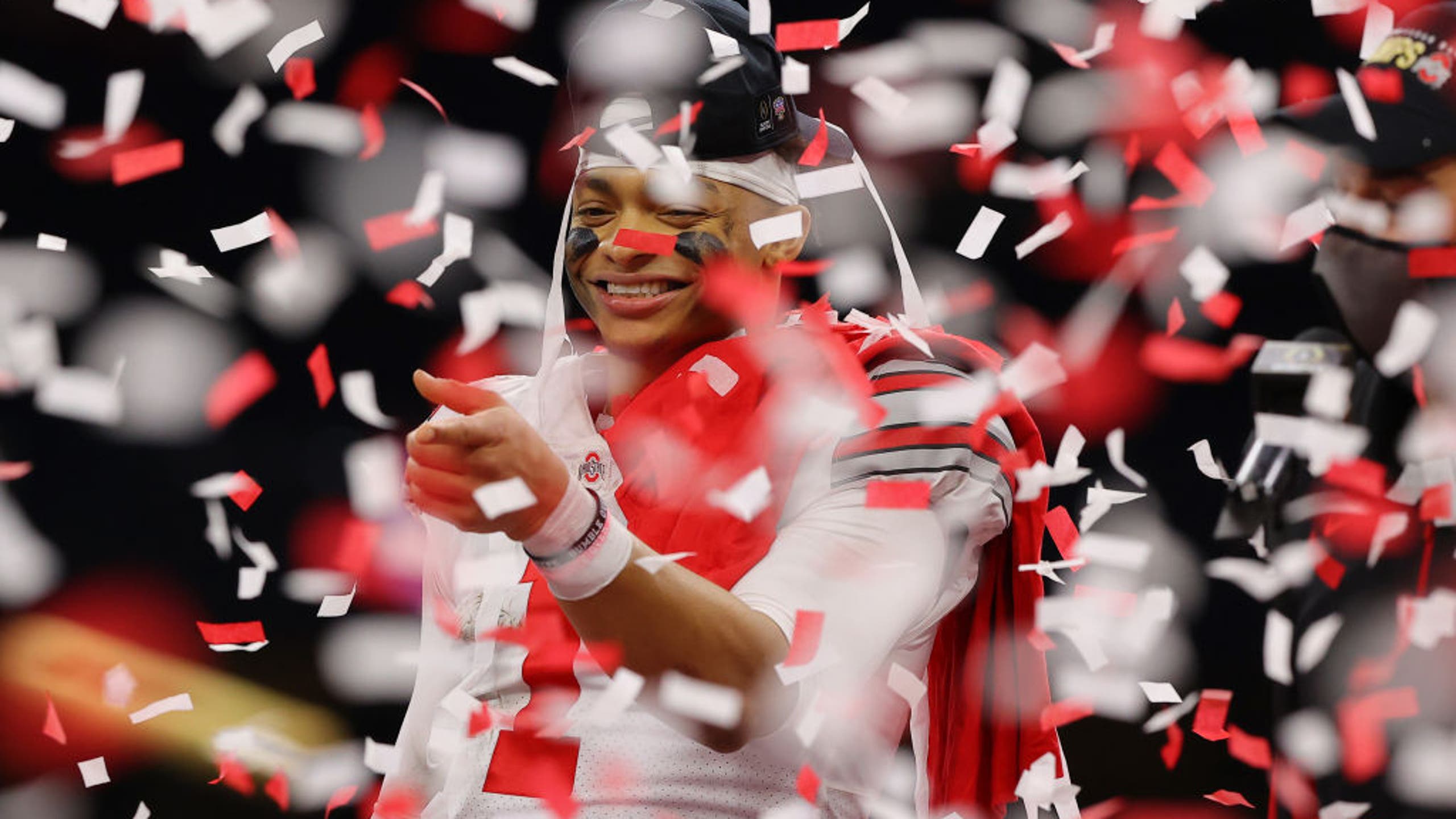 Clemson coach Dabo Swinney called Ohio State the No. 11 team in the country just before finding out the Buckeyes would be his opponent in the national semifinals. He then doubled-down on that opinion.

The Buckeyes did not forget.

The result? A 49-28 statement victory against the second-ranked Tigers in the Sugar Bowl, the Buckeyes’ first victory in five chances against Clemson in 42 years and an exorcism of the curse of Woody’s Punch.

Quarterback Justin Fields was simply sensational, throwing for a Sugar Bowl-record six touchdown passes and erasing the memory of his final pass of the 2019 season, an end-zone interception in a 29-23 loss to Clemson in last year's CFP.

That throw haunted Fields all offseason and was a huge reason why he and his Ohio State teammates fought so hard to play the 2020 season.

When he got the chance for redemption, Fields did not forget.

That Fields was even able to finish the game was a bit amazing in itself.

In the second quarter, Clemson linebacker James Skalski delivered a crushing hit to a scrambling Fields, hitting the QB in his right side with the crown of his helmet to Fields’ abdomen.

Fields was slow getting and went into the injury tent holding his side. He winced coming out of it. He could barely carry out a run fake.

At times during the second half, he looked incapable of protecting himself, and yet he played through immense pain.

"We’ll certainly wait for official confirmation from the team, but from my perspective this could be a rib cartilage injury, a rib muscle injury or, even more, some partial rib fractures," said FOX Sports injury analyst Dr. Matt Provencher after viewing video of Fields' hit.

And yet Fields not only returned to the field, he led.

He led as most NFL Draft pundits declared him good — but not good enough to be the No. 1 overall pick. He led as college football enthusiasts questioned his decision-making -- even though Fields has thrown as many interceptions in his career as a starter as Clemson quarterback Trevor Lawrence had thrown in 2019 alone (eight).

Midway through the third quarter, Fields had already passed for more than 300 yards and had thrown more TD passes (five) than incompletions (four). He finished with 385 passing yards, the six TD throws and just one pick.

He led with the memory of losing this game, to that opponent, one year ago. He led knowing he was at the front of the "We Want to Play" movement as his own conference canceled the season, potentially denying his chance at a national championship.

At the half, Ohio State walked into the locker room with a 35-14 lead as coach Ryan Day was not only sure Fields would start the second but would reiterate the message Swinney and the other critics had sent to his team:

You’re not supposed to be here.

Your league broke its own rules to get you here.

Those claims look ludicrous now after the Buckeyes racked up 641 yards, including 225 on the ground. Running back Trey Sermon rushed for 193 yards against a Clemson defense that prided itself on stopping the run. Sermon, the man Day wasn’t sure about until he broke the Buckeyes' single-game rushing record in the Big Ten Championship, did not forget.

And, now, neither will Dabo Swinney and Clemson.

From the moment Alabama cornerback Josh Jobe flew downfield at full speed and careened into Notre Dame's Chris Tyree on the opening kickoff, the consensus No. 1-ranked Crimson Tide set a physical bar it would meet for 60 minutes.

The Tide rolled against the Fighting Irish 31-14 in the Rose Bowl with feats of athleticism and an actuary’s precision.

While Heisman finalists Mac Jones, DeVonta Smith and Najee Harris each accounted for a majority of the offense’s pyrotechnics with statical lightning strikes, it was the defense that acted as an electrical shock to the ND offense.

The Alabama secondary proved so formidable that Irish coach Brian Kelly admitted to the broadcast crew that quarterback Ian Book was never going to even throw in the direction of Jim Thorpe Award finalist Patrick Surtain. Defensive lineman Byron Young demonstrated the front seven’s speed when the 6-foot-3, 292-pound sophomore ran down the normally elusive Book.

Linebacker Christian Harris personified the linebacking corps’ athleticism when he turned into a defensive back in his coverage of tight end Michael Mayer, aka "Baby Gronk," and picked off Book. And Smith bookended Saban’s patented relentless and peerless pressure when the AP Offensive Player of the Year gunned downfield on punt coverage with just 8:49 left to play and the Tide holding a 31-7 lead.

The postgame celebration could hardly be called one. None of the principals on stage were in a celebratory mood. Their focus was singular.

Alabama is not done.

Alabama feels unstoppable, inevitable even. The way the Crimson Tide has rolled since winning 63-48 against Ole Miss is no accident, and Saban’s team has beaten every opponent it has faced.

But so has Ohio State.

For the Buckeyes, getting to 7-0 has been the kind of ordeal that reveals itself in the resolve they’ve displayed just to get to the national title game for the first time in six seasons.

The Buckeyes have yet to play a game with every one of their starters since their season opener in November. They’ve played hurt. They’ve played sporadically and constantly battled forces beyond their control each game week.

If there is a team built with enough talent and enough self-belief to defeat Alabama — the prohibitive favorite to win the national title since the season first kicked off in September — it’s the Buckeyes.

They can’t afford mistakes. They can’t be shaky on the outside against the likes of Jones, Smith and Harris. They’ll have to play nearly flawless football to win. But, if the Buckeyes can do that, they can win and win in style — just ask Clemson.

Against No. 2 Clemson, the Buckeyes put up more than 600 yards of offense. Only Ole Miss has done that against Alabama.

Only Ole Miss and Florida have scored with the Tide, 48 and 46 points, respectively. Ohio State put up 49 against the Tigers on Friday night.

Alabama can win in any number of ways. But if the game turns into one of aerial combat, Fields and Ohio State have shown they can match firepower in a shootout.

And that should make the title game Jan. 11 a night to remember.