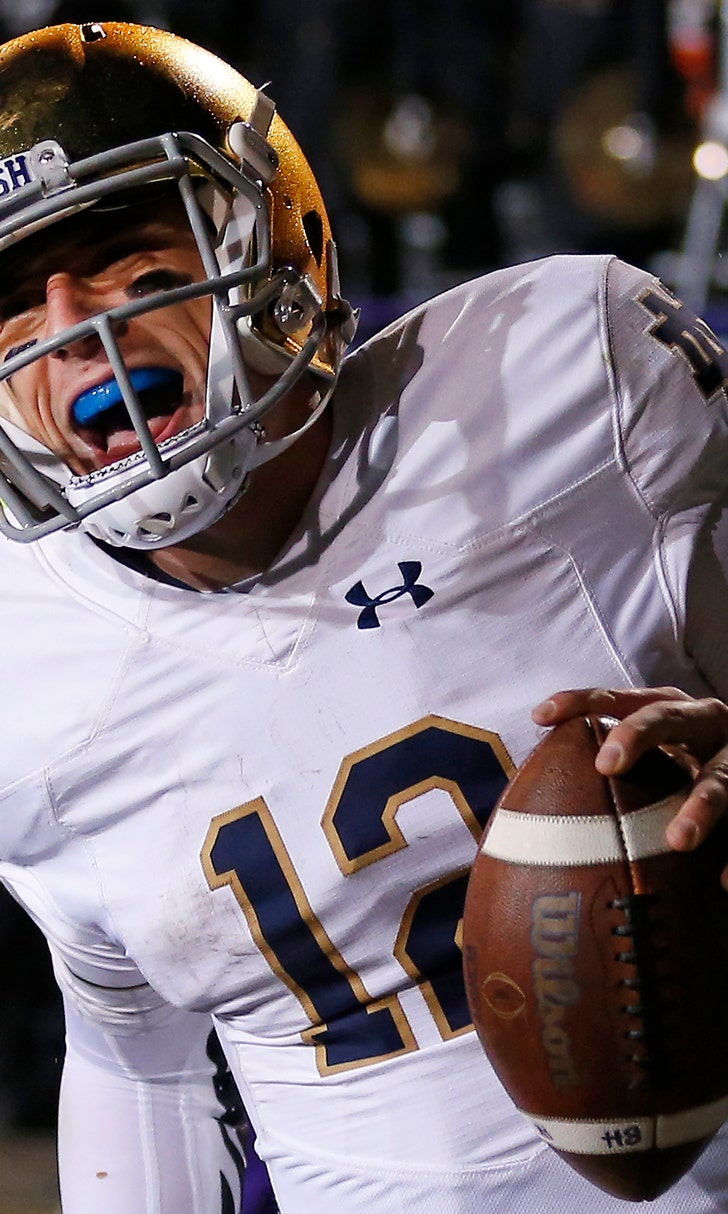 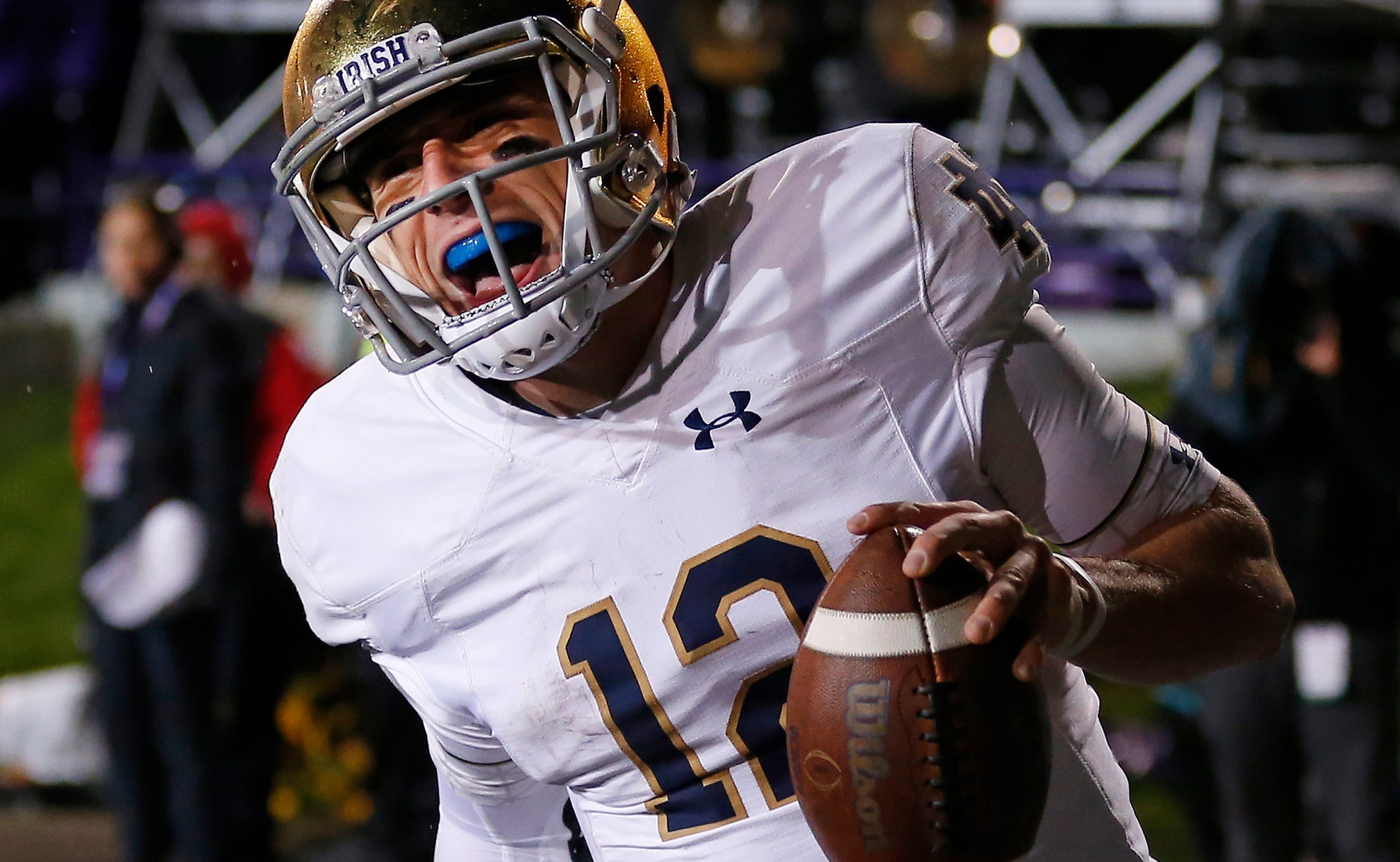 The biggest college football game of the weekend is taking place in a baseball stadium.

No. 3 Notre Dame (No. 3 College Football Playoff ) will put its unbeaten record on the line when it faces No. 12 Syracuse (No. 12 CFP) at Yankee Stadium.

Here are some things to know heading into Week 12 of the college football season.

Who could have guessed at the start of the season that this matchup at Yankee Stadium would shape up as one of Notre Dame's toughest challenges in its bid for a playoff berth?

In a year when some of the more prominent programs on Notre Dame's schedule have endured disappointing seasons, Syracuse has emerged as one of the nation's bigger surprises.

If Syracuse pulls the upset, Notre Dame could long regret the decision to move this game from South Bend to the Bronx.

While Alabama quarterback Tua Tagovailoa has all but etched his name on the Heisman Trophy, there's plenty of mystery regarding who will join him in New York. This week represents Milton's big chance to show he merits an invitation.

Milton and the Knights have feasted on overmatched foes for much of the season, but they face one of their toughest challenges Saturday when they host Cincinnati.

With the ESPN "College GameDay" crew heading to UCF this week, Milton will have a national stage to show how he's improved as he tries leading the Knights to a second straight unbeaten season. Milton has thrown 21 touchdown passes with five interceptions. He also has eight touchdown runs.

0-3: The nonconference record of Big Ten West Division champion Northwestern . The 24th-ranked Wildcats (No. 22 CFP) are the first Power Five team to win a division title while going winless in nonconference play.

3: Every team in the Pac-12 South Division has at least three conference losses.

25: Alabama is seeking a school-record 25th consecutive home victory when it hosts The Citadel. Alabama won 24 straight home games from 1971-74.

36: Florida State has played in a bowl game each of the last 36 seasons, an NCAA record streak. The Seminoles must beat No. 22 Boston College (No. 20 CFP) and No. 15 Florida (No. 13) next week to become bowl eligible this season.

410: Pittsburgh has averaged 410 yards rushing per game during its three-game winning streak. Pitt's season rushing average of 256.9 is its highest since 1976, when Heisman Trophy winner Tony Dorsett led the Panthers to the national title. Pitt can clinch its first Atlantic Coast Conference championship game appearance by winning Saturday at Wake Forest.

UAB's rise has been one of college football's best stories this season.

UAB shut down its program in a cost-cutting measure after the 2014 season. The Blazers reversed the decision six months later amid a public outcry but didn't play any games in 2015 or 2016.

Now the Blazers are 8-1 and have a shot to reach the Conference USA championship game. First they will leave conference play and test themselves against a Power Five opponent.

Texas A&M is a 17-point favorite but has a habit of late-season fades, something that first-year coach Jimbo Fisher is trying to change. UAB averages 3.8 sacks per game to lead all Football Bowl Subdivision programs.

Colorado won its first five games this season and was ranked as high as 19th.

Much has changed since.

The Buffaloes have followed up that 5-0 start with five straight losses and now are simply trying to become bowl eligible amid reports suggesting MacIntyre's job is in jeopardy. Colorado athletic director Rick George issued a statement Monday saying that "I have made no decisions regarding the future of the football program."

Colorado hosts No. 21 Utah (No. 19 CFP) on Saturday before closing the regular season at California.

MacIntyre owns a 30-43 record in six seasons at Colorado, including a Pac-12 championship game appearance two years ago.

UAB Blazers
share story
those were the latest stories
Want to see more?
View All Stories
Fox Sports™ and © 2020 Fox Media LLC and Fox Sports Interactive Media, LLC. All rights reserved. Use of this website (including any and all parts and components) constitutes your acceptance of these Terms of Use and Updated Privacy Policy. Advertising Choices. Do Not Sell my Personal Info