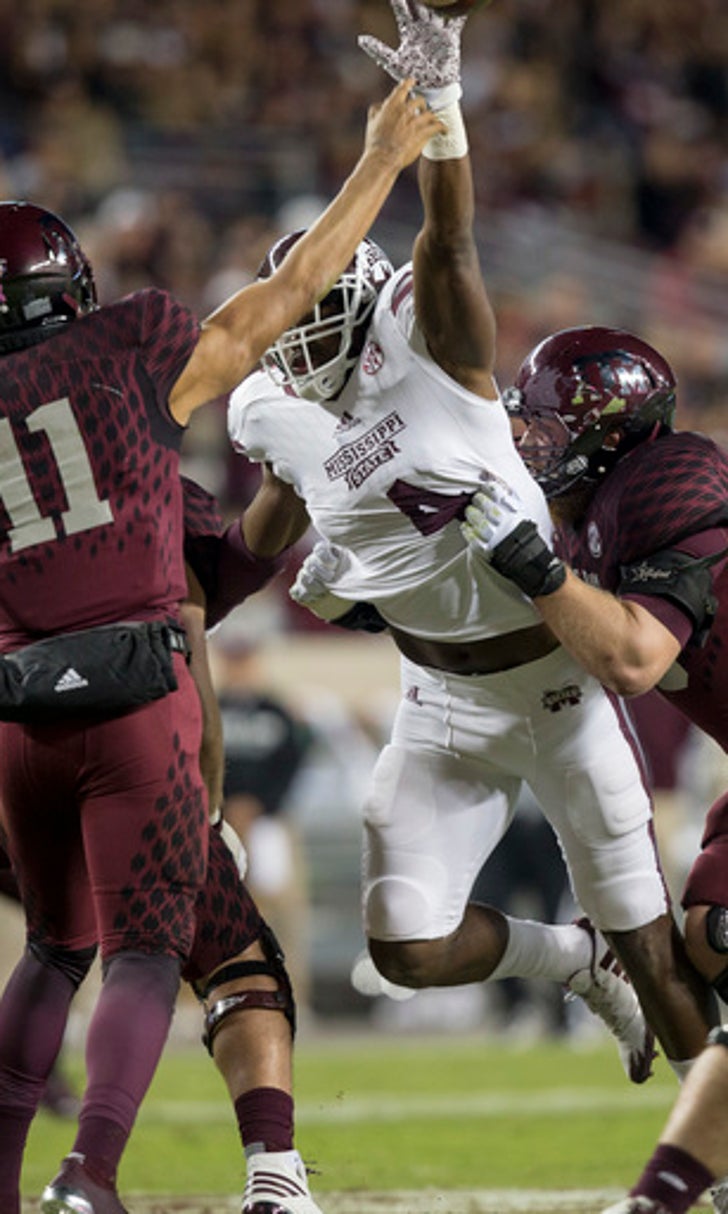 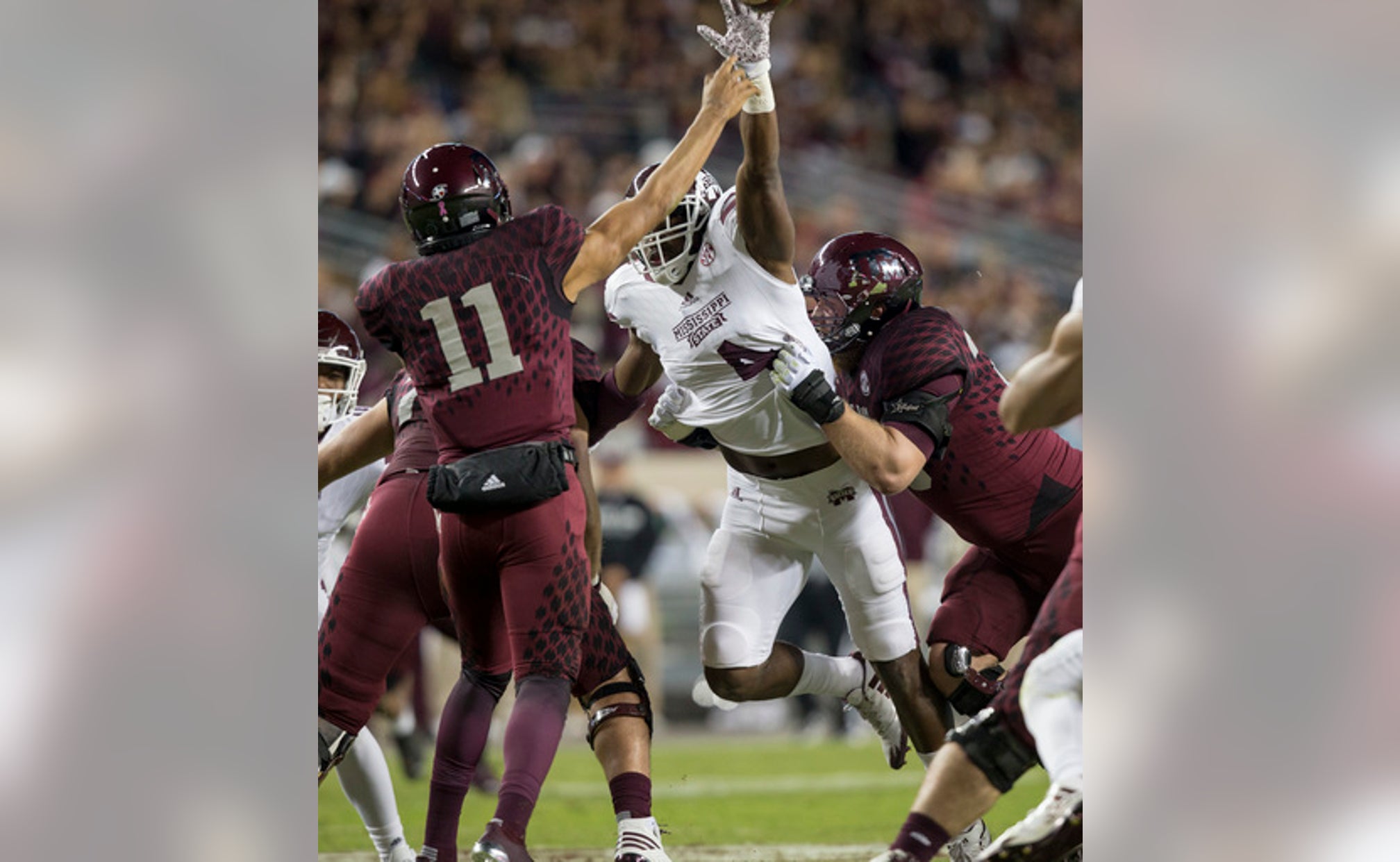 ''Six wins means that our guys are rewarded with one more game,'' MSU coach Dan Mullen said of the Bulldogs becoming bowl-eligible with four regular-season games remaining. ''Hopefully we'll get some more.''

No one is doubting that at this point, with November still to come. Mississippi State (6-2, 3-2 SEC) hadn't won or lost a game by less than 25 points heading into Saturday's contest. The Aggies (5-3, 3-2) were coming off their bye week, but looked like the frazzled team between the lines on Saturday.

''Tonight was very frustrating, particularly in the first half when we had some opportunities,'' said A&M coach Kevin Sumlin, whose job is on the line in College Station.

Meanwhile Mullen had a good time with anyone who picked his program to finish with only six wins this season - and there were plenty of prognosticators who did so in the summer.

''We made their predictions come true,'' Mullen said, smiling. ''I guess we hit that - but there's a lot of football left to be played.''

The Bulldogs burst to a 14-0 halftime lead thanks to a run-stuffing and pass-swatting defense. Nick Fitzgerald got MSU on the board late in the first quarter with a 2-yard touchdown keeper to cap a 16-play, 86-yard drive.

Late in the second quarter MSU added to its lead with an 8-yard touchdown pass from Fitzgerald to Donald Gray, the fourth play of a 53-yard drive highlighted by Fitzgerald's 45-yard dash against a reeling defense.

After halftime MSU picked up where it left off, as Fitzgerald connected with Farrod Green on a 41-yard passing play, and then Fitzgerald hooked up with a wide-open Jordan Thomas on a 10-yard touchdown pass to lift the Bulldogs to a 21-0 lead with 11:47 left in the third quarter.

''We had a great game plan going in,'' Fitzgerald said. ''We knew if we could move them up front and we could run the ball, that's what we were going to do. Obviously, it worked out for us.''

A&M finally got on the board in the third quarter on a direct snap to running back Keith Ford for a 1-yard touchdown, capping a drive highlighted by quarterback Kellen Mond's 33-yard scramble. The Bulldogs answered quickly with an interception of Mond's pass and, three plays later, Nick Gibson bulled his way into the end zone for a 14-yard touchdown run to again push the MSU lead to a comfortable three touchdowns.

A year earlier Fitzgerald had blasted 74 yards for a touchdown on the Bulldogs' first play from scrimmage in an eventual 35-28 MSU victory in Starkville, Miss., that squashed the national-title hopes of A&M, slotted fourth in the initial College Football Playoff rankings last season.

This time both teams were unranked, but Fitzgerald again worked over the Aggies with his legs and feet. The Bulldogs outgained the Aggies 369-285 in total offense, including 228-96 on the ground.

''I'm really proud of our guys and their attitude with which they approached the game and went out and performed,'' Mullen said.

A&M quarterback Nick Starkel, recovered from a broken ankle suffered in the season opener, replaced a roughed-up Mond in the fourth quarter, and threw an interception returned for a touchdown by Jamal Peters. But Starkel rebounded on A&M's next offensive series with a 70-yard touchdown pass to Camron Buckley late in the game, with the Bulldogs' lead already well out of reach.

Texas A&M: The Aggies had lived on the edge for much of the season with four second-half comebacks against subpar opponents. Their luck ran out against a quality foe on Saturday night.

Mississippi State: The Bulldogs are on a roll after consecutive stumbles against Georgia and Auburn. They'll be put to the ultimate test on Nov. 11 at home against Alabama, but first up for MSU is Massachusetts at Davis-Wade Stadium.

Texas A&M: The Aggies were nearly equally inept in the running game. Trayveon Williams and Kellen Mond led the way with 32 yards rushing each, while Keith Ford added 25. Williams averaged 3.2 yards per carry and Ford followed with 3.1.

Mississippi State: Nick Fitzgerald rushed for more yards (105) than the Aggies did as a team (96). Fitzgerald whipped up on A&M last year, too, and the Aggies will be glad when they don't have to face him anymore.

Texas A&M: The Aggies play their second of three consecutive home games when No. 19 Auburn visits Kyle Field on Saturday. The visitors have won in each of the five previous games as SEC West opponents.

Mississippi State: The Bulldogs take a break from SEC play by hosting Massachusetts on Saturday. Mississippi State has won three consecutive games following league losses on the road at Georgia and Auburn.

''After the first three games, we were riding really high. The next two knocked us back down, back to where we needed to be. We reevaluated where we were as a team, and since then we've played pretty well.''

MSU quarterback Nick Fitzgerald on losses on the road to Georgia and Auburn sparking the team.

Ohio State's Championship Conundrum
The Buckeyes could miss the Big Ten title game through no fault of their own. Urban Meyer offers one thing to keep in mind.
40 mins ago