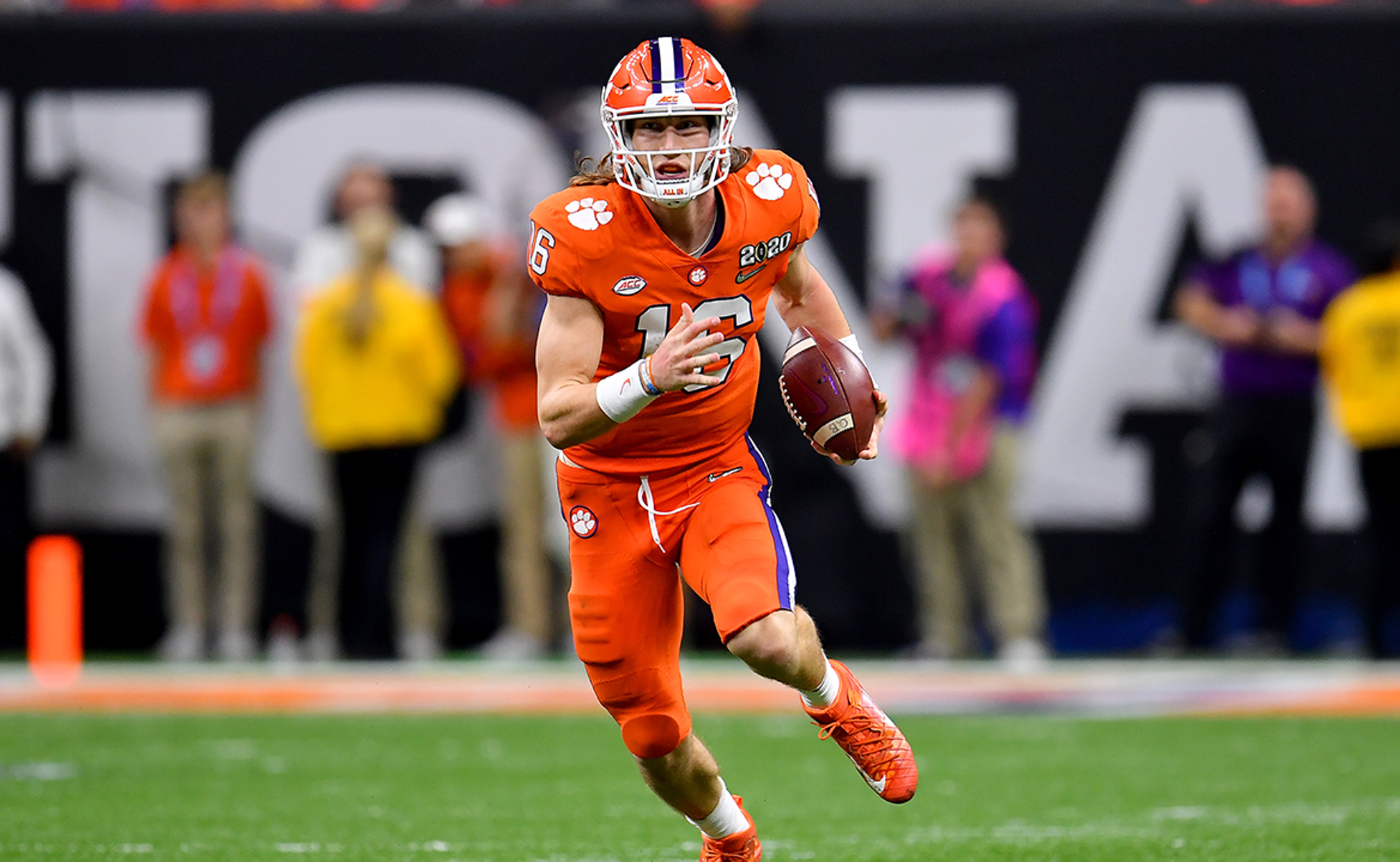 Welcome to Week 7 of the college football season, highlighted by two shocking upsets over top ranked programs in the afternoon and an evening matchup between No. 2 Alabama and No. 3 Georgia.

Check out the top plays from another jam-packed Saturday of college football. (All odds provided by FOX Bet.)

Ordering up a little delivery

Alabama struck first against Georgia in Saturday's titanic tilt, but the Bulldogs seized a 14-7 lead in the first half on a astonishing 82-yard touchdown catch and run by James Cook from QB Stetson Bennett.

Georgia took a 24-20 lead into halftime, but the Crimson Tide struck back with an epic 90-yard touchdown pass from Mac Jones to Jaylen Waddle.

Then, Alabama used a little ricochet action to pick off Bennett en route to another score and a double-digit victory.

Clemson quarterback Trevor Lawrence took down Georgia Tech 73-7, the most points for the Tigers in a road game since 1915 (94-0 at Furman).

Lawrence had five touchdown passes by the end of the first half alone. He finished the day completing 75 percent of his throws for 404 yards for five scores, including this 83-yarder to receiver Amari Rodgers.

And this pitch-fake perfect toss from Lawrence.

A 21-point third quarter deficit for Memphis ended with a 50-49 win over UCF for one of the greatest comebacks in Tiger program history.

Memphis ended a 13-game losing streak to UCF, with a go-ahead drive down the field, capped by a 4-yard touchdown to receiver Calvin Austin III with a little under a minute and half remaining.

Auburn Tigers quarterback Bo Nix had a rough day, completing just 51.1 percent of this throws for one touchdown and three interceptions.

Even big-time plays like this couldn't bail Nix out in the 33-20 loss to South Carolina.

And in the victory, the Gamecocks were hyped on both sides of the ball. Look no further than this grown-man catch via 5'10" wide receiver Shi Smith, who Moss'd his defender for the touchdown.

Smith became the first South Carolina player to have at least 10 catches in three-straight games, and the Gamecocks earned their first win over Auburn since joining the SEC.

A Seminole moment against North Carolina

The Tar Heels are the No. 5 team in the country, while Florida State entered Saturday unranked. But someone forgot to tell the Seminoles, apparently, as they capitalized on a telegraphed throw in the backfield for an easy pick-six.

UNC made things interesting late on a pretty throw by Sam Howell ...

... but Florida State held off the Heels for the top-five upset.

What's better than one pick-six?

Well, two, of course – especially when the second is an 85-yarder to the house.

It was no surprise that Tennessee quarterback Jarrett Guarantano was benched after his multiple giveaways, but sophomore backup J.T. Shrout replaced Guarantano and immediately threw another interception.

The Auburn quarterback struggles led to a 34-7 loss to Kentucky, who earned the victory in Knoxville for the first time since 1984.

Arkansas finally earned a conference win at home after a four-year drought.

The story of the day for the Razorbacks was the defense, as Arkansas shut out the Rebels in the first half, 20-0.

The Hogs picked off Ole Miss quarterback Matt Corral six times and recovered the quarterback's lone fumble for a 33-21 victory.

Of course, the stout defense got a little help from the offense, specifically from receiver Treylon Burks who showed out with the standard but no-less dazzling one-handed catch.

Mountaineers get over the hump

Kansas came to play early, starting with a forced West Virginia fumble on the Mountaineers' first drive of the game.

It was followed up by Jayhawks receiver Andrew Parchment showing off his concentration skills in securing a tipped pass for a 43-yard touchdown.

But soon after, the Mountaineers took over, as running back Leddie Brown provided a spark to the offense in the second quarter.

Leddie was on the loose for 231 total yards and two touchdowns, including an 87-yard house call.

West Virginia finished Kansas off with Leddie leading the way, 38-17.

Popped up for the pick-six

This interception was about as wild as the fact that the "air raid" Mississippi offense had gone eight quarters without scoring a single point on offense.

Call this play the "jumbo package," with 300-pound Nyles Pickney bulldozing it in for the 1-yard score.

Next up, the big-man interception

Middle Tennessee State receiver Jarrin Pierce laid it all out for the touchdown score to give the Blue Raiders an early lead.

College Football's Top Plays: Week 8
Check out the best plays from Week 8 of the college football season as they happen!
50 mins ago