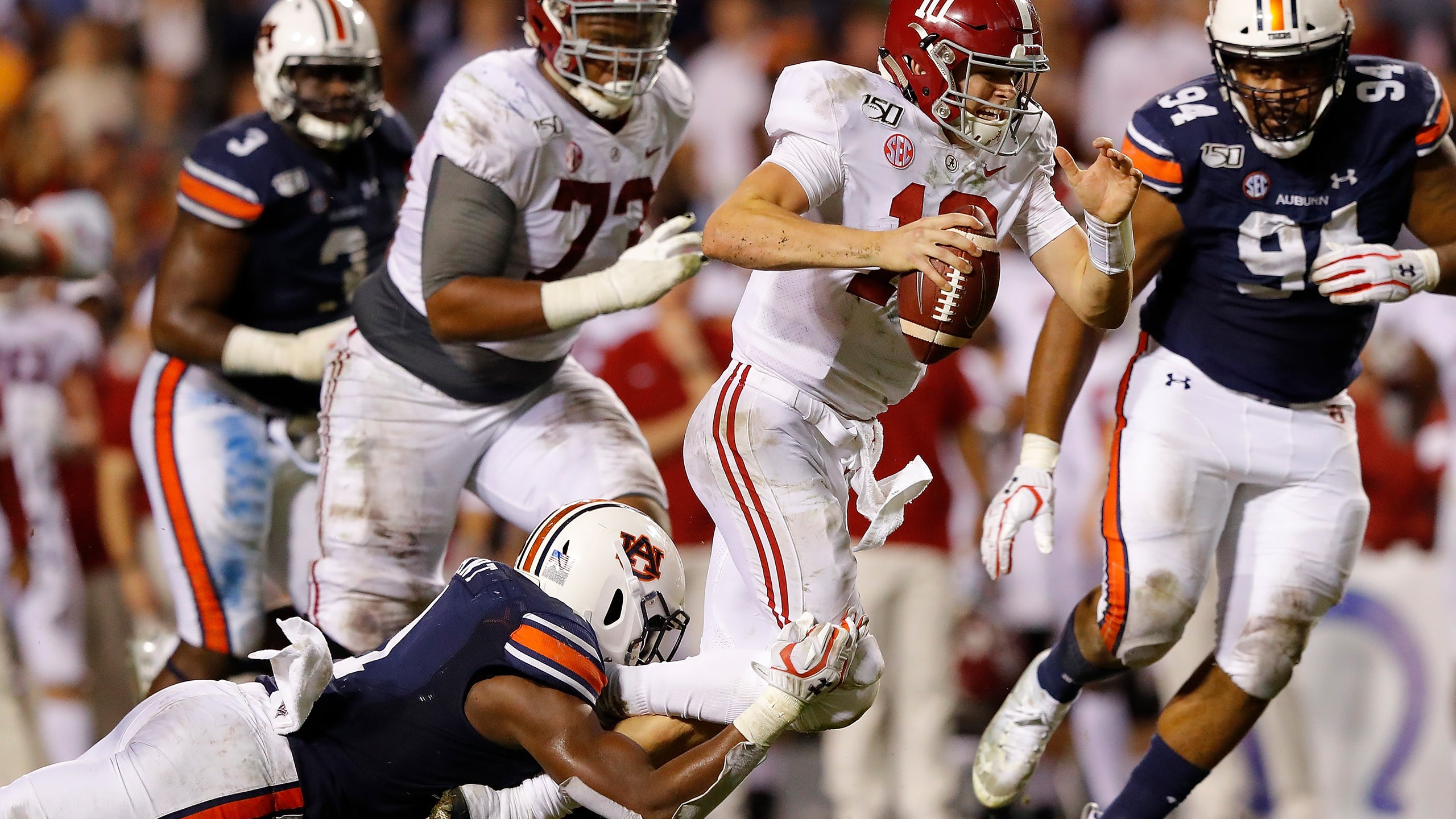 previous story
How To Win $50,000 On Thanksgiving
next story
What Sports Fans Can Be Thankful For
College Football

Normally, traditional rivalries dominate Thanksgiving weekend, with berths to conference championship games and bragging rights on the line in those contests.

But nothing has been normal about the 2020 college football season. The Thanksgiving weekend schedule is no different, with several rivalry games being delayed for a week or two.

One big exception this weekend is the Iron Bowl.

No. 22 Auburn and top-ranked Alabama will renew one of college football's most heated rivalries Saturday in Tuscaloosa. That game is not only one of the few meetings of ranked teams this weekend, it is also is the showcase game of the FOX Bet Super 6 slate.

By predicting what will happen between the Tigers and Tide, and the results of five other games, you could be in line to win the weekly $25,000 jackpot. Just download the FOX Super 6 app on your phone, pick this week's six games and the margins of victory in each for your shot at the prize.

Oklahoma State wasn’t just beat last week in its “Bedlam” game against Oklahoma, the Cowboys were thoroughly outclassed to the tune of a 41-13 thumping by the Sooners. The good news for the Cowboys is they are still in the mix for the Big XII title game, although they have lost control at this point with head-to-head losses to both Texas and Oklahoma. Quarterback Spencer Sanders was forced to leave the OU game with a shoulder injury but eventually returned.

Meanwhile, the Red Raiders edged Baylor 24-23 last week. Tahj Brooks rushed for two touchdowns, while Jonathan Garibay hit four field goals. Texas Tech allowed more than 60 points in its losses to the Sooners and Longhorns, so the Red Raiders defense will need to step to try to slow down the Cowboys in Stillwater, Okla.

When is beating another Top 10 team not enough? When you are Ohio State and you don’t really pass the eye test against Indiana on defense last week. The Hoosiers, behind 491 passing yards and five TDs from Michael Penix Jr., rallied from a 28-point deficit to make things close at the end in a 42-35 defeat.

Justin Fields led Ohio State with 300 yards and two TD tosses, but he threw three interceptions in his most uneven performance of the year. Buckeyes running back Master Teague is a force that Lovie Smith’s defense will have to slow down.

Illinois has won two straight, including a resounding 41-23 victory at Nebraska. Mike Epstein rushed for 113 yards and a TD in the win.

In a renewal of the game's most storied rivalries, the Tigers get their shot at knocking the Crimson Tide off their lofty perch atop the College Football Playoff rankings. The Iron Bowl always sees its share of drama, but another wrinkle was thrown in Wednesday morning when Alabama coach Nick Saban tested positive for COVID-19, throwing his status into question.

Mac Jones is a Heisman candidate for Alabama, having thrown 18 TD passes and just three interceptions. Meanwhile, Auburn quarterback Bo Nix needs to step to another level for the Tigers to have any chance of pulling the upset in Tuscaloosa.

Don’t look now, but USC has one of the best résumés of any team in the PAC-12 with close wins over Arizona State and Arizona and an impressive road victory last week at Utah. Kedon Slovis is showing experience and poise beyond his sophomore campaign at quarterback, and Clay Helton’s offense is as sharp as its been.

Meanwhile, the Buffaloes have averaged 41.5 points per game in wins over UCLA and Stanford. Keep an eye out for Jarek Broussard, Colorado’s running back who is averaging 29 carries and 154 yards per game.

The Mountaineers are dangerous, however, as their 37-10 victory against Kansas State two weeks ago proved. Jarret Doege doesn’t get the attention of Rattler, but he has an almost 66 percent completion rate, 2,219 yards and 13 TD passes.

Two teams trying to gain traction in the Pac-12 square off under the lights at the Rose Bowl. UCLA didn't have quarterback Dorian Thompson-Robinson last week at Oregon, but the Bruins still gave the No. 11 Ducks all they could handle in a 38-35 loss. Freshman QB Chase Griffin threw for 191 yards and a TD, but had two costly interceptions in the loss. Thompson-Robinson’s status was up in the air as UCLA coach Chip Kelly didn’t reveal his QB early in the week.

Arizona's biggest problem is defense, where the Wildcats have allowed 39 points per game and allowing an average of 485 yards of total offense.