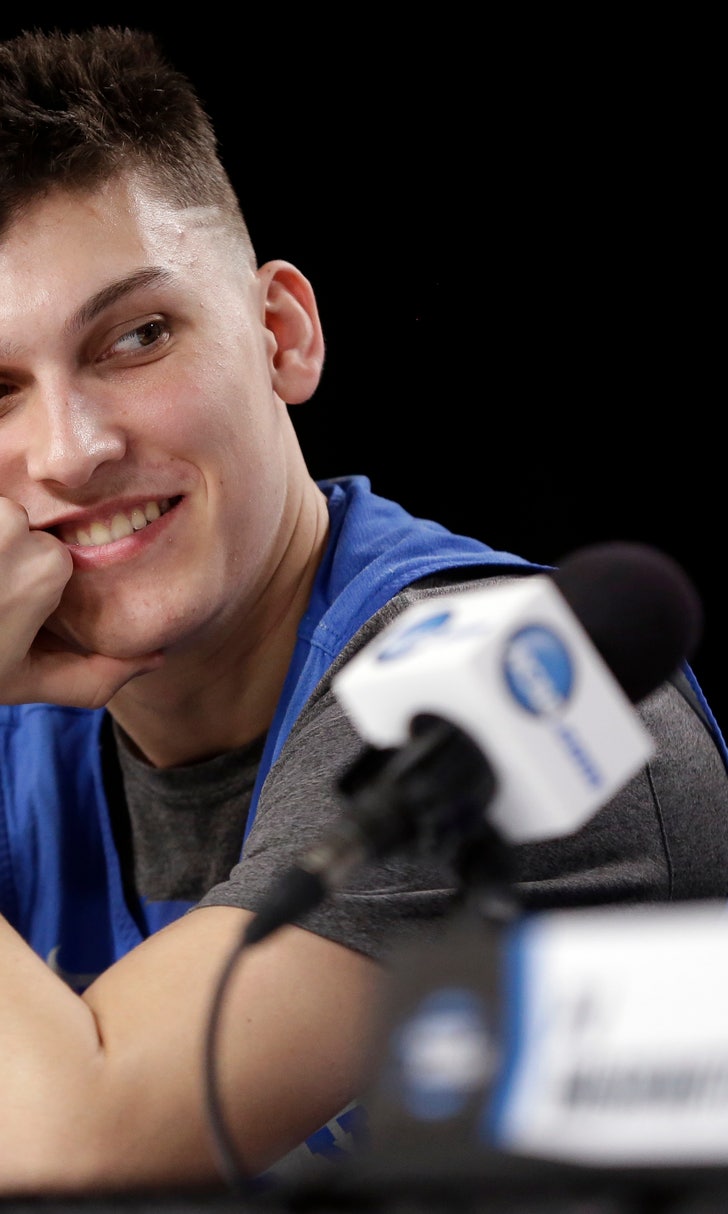 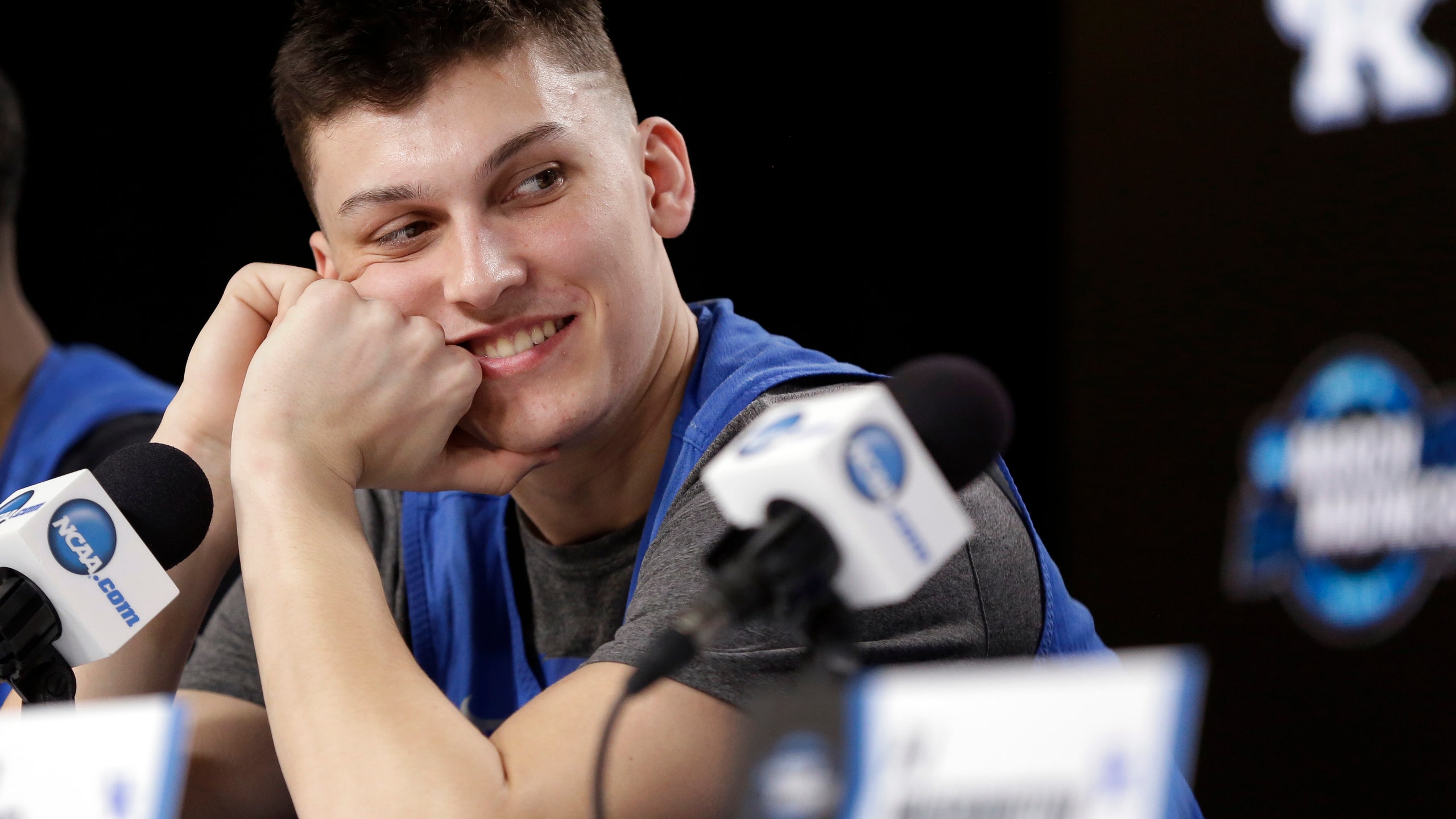 Tyler Herro: Kentucky fans love him, opponents not so much

KANSAS CITY, Mo. (AP) — Tyler Herro is always confident, some might even say cocky, so it seemed a bit out of character when he turned sheepish when asked Saturday if he had anything to say to his haters now that he's in the Elite Eight of the NCAA Tournament.

"Nobody hates me," Kentucky's freshman guard said, seeming to shrink into his microphone on the dais at the team's media availability.

Herro hasn't necessarily taken the mantle from noted Duke instigator Grayson Allen as the player fans most love to loathe. He could be a candidate, though. Herro has a swagger about him, and he did turn to an Arkansas player after making a shot and declared, "I'm a Bucket." His nickname, Boy Wonder, also might make residents outside Big Blue Nation cringe.

The thing about Herro, he seems able to back it all up.

He was voted The Associated Press newcomer of the year in the Southeastern Conference, has knocked down too many big shots to count late in games and is one of the best free-throw shooters in the game.

His go-ahead 3-pointer with 25 seconds left and two free throws after that put away Houston in the Midwest Region semifinal on Friday and helped clear the second-seeded Wildcats' path to Sunday's final against fifth-seeded Auburn.

Herro is the Wildcats' second-leading scorer (14.2 ppg), and they're 19-0 when he scores 15 or more. He's belied predictions he would simply be a spot-up shooter with not much else to his game. Coach John Calipari called Herro a "gym rat" determined to become a more well-rounded player once he got to Lexington.

Herro also has evolved as a defender. "When I just got here," he said, "I really couldn't guard anybody."

Last week he was assigned to Wofford's Fletcher Magee, and the NCAA's career leader in 3-point field goals went 0 for 12 from distance. He drew Houston scoring leader Corey Davis Jr. on Friday and locked him down until the middle of the second half.

"The biggest thing I saw in him early was just his confidence," graduate transfer forward Reid Travis said. "I think a lot of guys have confidence but don't necessarily put the work in. But for Tyler, that's not the case. See him in the gym every night, every morning, putting up reps and shots. So you know that he's going to shine in these moments. When he gets on the biggest stage, he's calm, collected and always confident to take those shots."

Herro grew up in the Milwaukee area and verbally committed to Wisconsin in September 2016. Before his senior year at Whitnall High, he found himself rising on national recruit lists and he decided to reopen his recruitment.

Within a month Calipari was at his school watching him work out, and he followed up with a home visit where he offered a scholarship.

"I knew I was going to go there right away," Herro said.

The reaction to Herro's de-commitment was startling. His family's house was egged, his car was vandalized and "traitor" was among the nicest of names he was called. He also received death threats, according to a Bleacher Report profile of him.

So Herro knew something about hate well before he put on the Kentucky uniform. He brushes it off now and gives Kentucky fans every reason to love him and opposing fans to not.

"I came here to be the player I am," he said. "I just wanted to play on the biggest stage in college basketball, get pushed by a coach like Coach Cal and the rest of the coaching staff and play with other great players like I'm playing with. Everything I've expected has happened."

The Seven Teams That Can Win It All
Mark Titus lists the seven teams that he believes have the goods to win the NCAA Tournament. Did he leave out any contenders?
23 hours ago

Cade Cunningham's Monster Day
Oklahoma State freshman Cade Cunningham exploded for 40 points Saturday in an upset of No. 7 Oklahoma. Look out NBA.
4 days ago
those were the latest stories
Want to see more?
View All Stories
Fox Sports™ and © 2021 Fox Media LLC and Fox Sports Interactive Media, LLC. All rights reserved. Use of this website (including any and all parts and components) constitutes your acceptance of these Terms of Use and Updated Privacy Policy. Advertising Choices. Do Not Sell my Personal Info