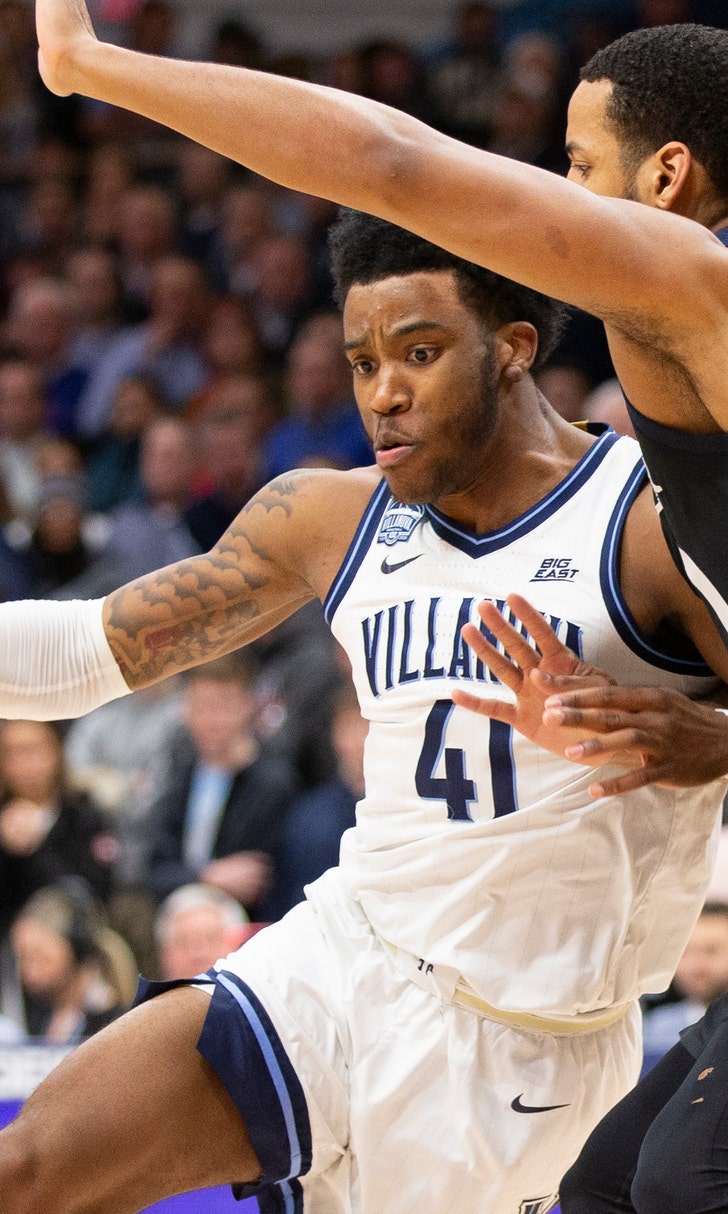 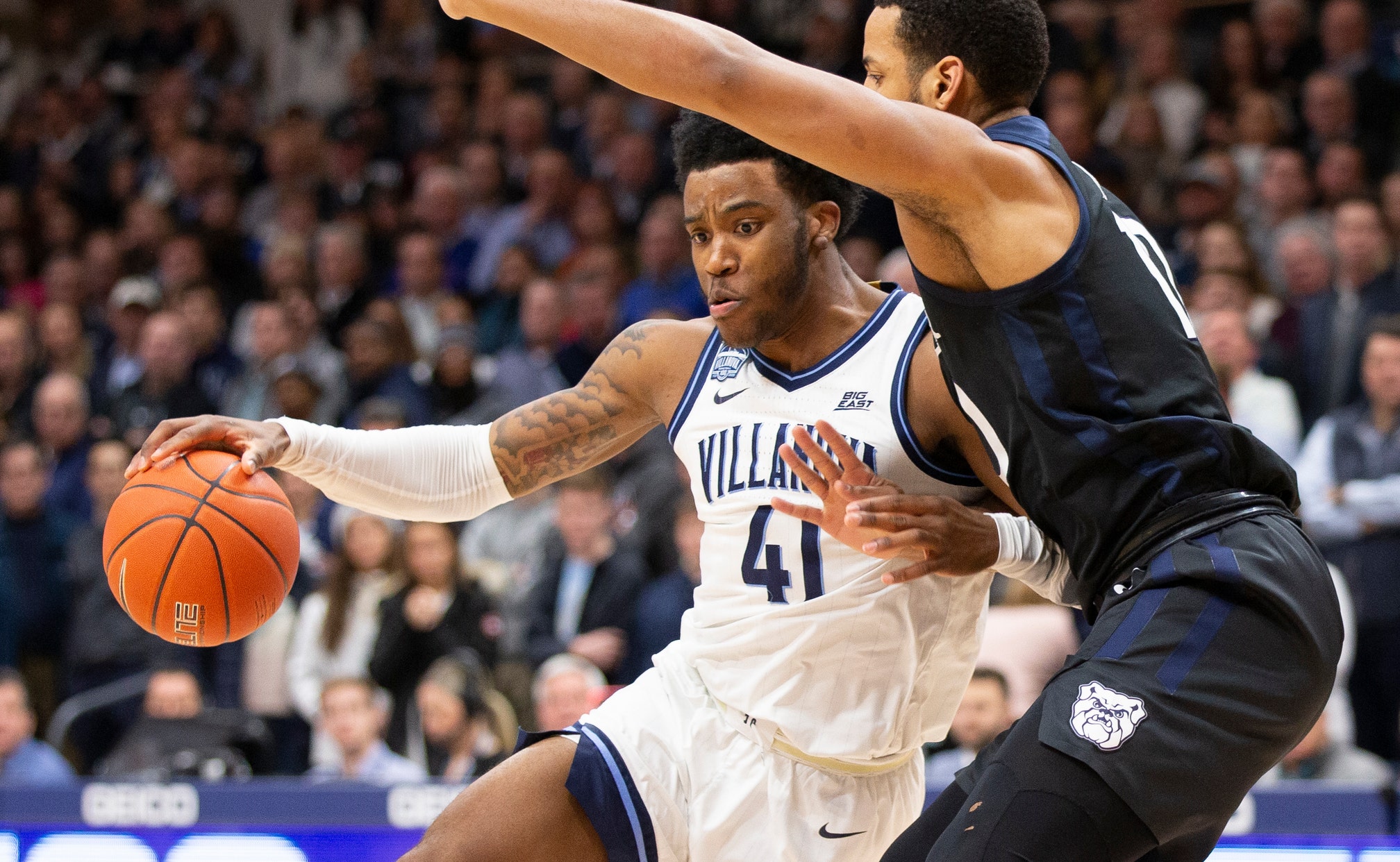 VILLANOVA, Pa. (AP) — As Villanova stumbled in its latest slow start -- the usual Big East blowouts have been absent this season -- coach Jay Wright wondered if a more divine pregame report had been ignored.

Rev. Rob Hagan, the team chaplain, might leave the pep talk to Wright, though even the two-time national championship coach has about thrown up his hands trying to solve another early deficit.

But the Wildcats get going eventually, and proved the conference title still runs through the Main Line.

Saddiq Bey hit four 3-pointers and scored 14 points and Jermaine Samuels had 20 points to lead No. 9 Villanova to a 76-61 win over No. 13 Butler on Tuesday night.

"That's a team that can break you," Wright said.

The Wildcats (15-3, 5-1 Big East) methodically pulled away in the second half in a game in which neither team shot particularly well. Villanova led by 11 late in the game despite a 1-for-7 shooting slump; still enough to protect the lead with the Bulldogs on a 1 of 10 slump.

The anticipated matchup between two of the supposed best in the Big East lost a bit of luster when the Bulldogs (15-4, 3-3) dropped consecutive games to Seton Hall and DePaul. Except for a couple of brief pockets, the Bulldogs couldn't score against a Villanova defense that had tightened up of late and had held teams to 63.3 points over the last seven games. The Wildcats have won five straight and 11 of 12, again a tough out, especially at the Pavilion, where they improved to 27-1 in Big East games since 2013.

"Just the culture of it," Bey said. "Just being proud of the past players that were here. That's the motivation every day."

"I thought we had great looks all night," Butler coach LaVall Jordan said. "We didn't make as many as we normally make. They made them when it counted."

Baldwin shook off a lackluster first half, scoring 10 in the first nine minutes of the second to bring the Bulldogs within four. Baldwin, though, picked up his third foul around the same time and the rally flickered out. Justin Moore hit Villanova's ninth 3 to stretch the lead to 11 and the Wildcats were on their way to a sweep of a four-game homestead (two at Nova; two in Philadelphia).

The Wildcats' only on-campus loss at the Pavilion since the Big East was reconfigured in 2013 was against Butler on Feb. 22, 2017. Baldwin scored 15 points in the 74-66 victory and entered Tuesday averaging 18.2 points this season in Big East games. Butler's leading scorer was an absolute non-factor early against the Wildcats, and so was No. 2 option Sean McDermott. They combined for just five points in the half and watched the Wildcats take a 36-26 lead into halftime.

"There's nothing wrong with Butler," Wright said. "Our league is going to be like this this year."

The Wildcats kept possessions alive with offensive rebounds (eight in the first half) and they needed all of them — there were plenty of misses. Villanova missed its first five 3s and 10 of 11 shots overall, but Butler couldn't do much offensively to pounce on the scoring drought. Bey and Jeremiah Robinson-Earl, who scored 12 points, snapped the cold spell with consecutive 3s and the Wildcats finished with six in the half.

The Wildcats were 10½-point favorites last week against DePaul and trailed 21-8 before they rallied and won the game in overtime. UConn tested the Wildcats on Saturday and led in the first half until Villanova took a small lead into the break, and win by six.

Butler: What's up with the Bulldogs? Butler has lost three straight games, and could fall out of the Top 25 on Monday. The Bulldogs have allowed 76-plus points in all three losses.

Villanova: The Big East is a beast this season, with three teams in the first 15 spots of the Top 25, but the Wildcats are still the team to beat.

The Bulldogs also lost forward Christian David to a knee injury in the first half. David went down hard under the net and needed assistance off the court.

Villanova: At Providence on Saturday.